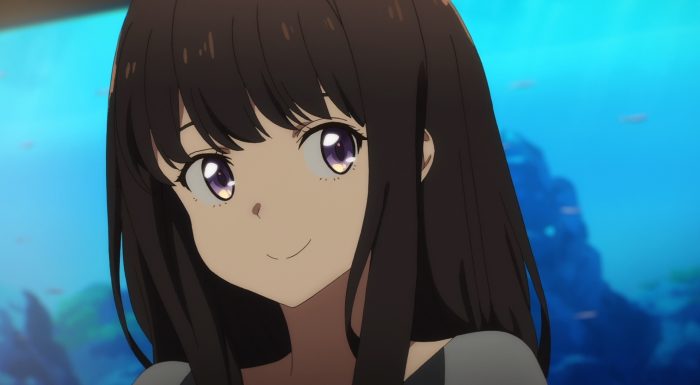 It really is great when a show can just deliver a fun experience that also contains the promise of getting even better. This episode set up the next immediate challenge for Chisato and Takina. It is clear that the green haired lunatic will be pushing both of them with whatever he does to escalate things next. And yet the main focus of the episode was really solidifying the partnership between Chisato and Takina. The shopping trip was as important as anything and they didn’t quite get wrapped up in the chaos that was happening underground either. In that sense though, it also means that they won’t quite be up to speed about the current danger level. 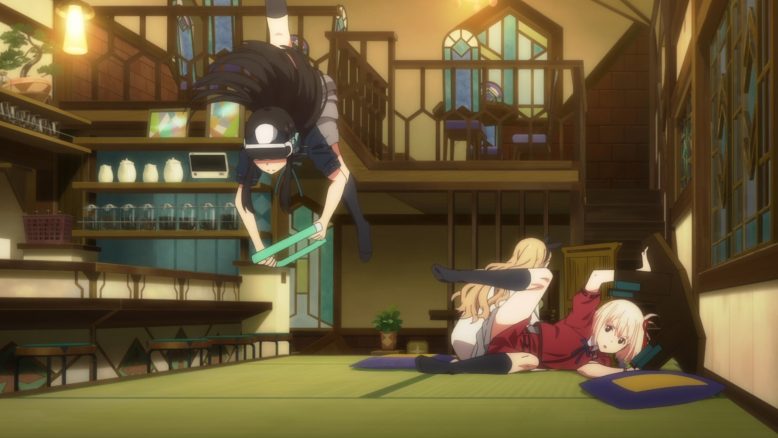 The moment that started it all…

There was a lot of fun to be had in this episode. They even found time for small bits of silliness like the VR shooting game. I like the reality that Chisato was losing to Fuki and yet things turned right around for her when she recruited Takina to take her place XD. I suppose it means that Chisato’s OP skills just don’t translate to VR combat. And it also establishes that Takina is just straight up the best shot amongst the characters we’ve seen so far. She hadn’t even played that game before now and yet she instantly translated her skills and cleaned Fuki right up.

It’s funny how that one scene basically kicked off the rest of the episode. A bit of a flip, a boxer reveal, and suddenly things just took off. I found it good and hilarious how this was such a major thing for Chisato and that she had to deal with this crisis! Of course Takina being such a locked in Lycoris didn’t have much interest in getting creative with her outfits. She would take what she was given and work with that. I can’t blame Mika either for not going out of his way. That’s a questionable topic for him to get into any more than he did. The punch line for this episode was great too. After spending so much time going after Takina about the boxers she tried them herself…and didn’t mind it XD. Naturally it blew up on Chisato as it should. 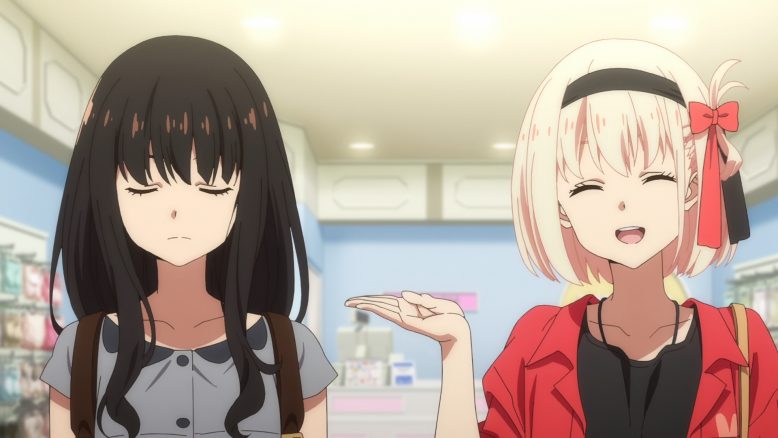 Gotta have the right clothes…for the right gun fight

Their little shopping date was a lot of fun too. The impact of the last episode was easy to feel. They are a great deal closer now. At the very least Takina feels more comfortable with Chisato’s quirks and is opening up herself. I don’t think she’d have cared to learn about Chisato’s past before the previous episode. And I definitely can’t imagine that Takina would do a silly fish impression to cheer Chisato up after Chisato expressed unease about being able to find the person she’s been searching for. It’s funny how Chisato is looking for Shinji. She just doesn’t know it and he looks to be a major antagonist. There are bound to be trials that test their partnership and their friendship. But for that reason they really need to be close before all of that. And they definitely look to be on the right track for that.

Maybe the most hilarious moment was during the underwear shopping. That would normally be expected to be hyper fanservice but they actually kept it pretty minor. The best thing was Takina getting a bit baffled about what Chisato was talking about…and then hauling her into the change room. I definitely didn’t expect this episode to contain Takina demanding that Chisato strip and show her underwear! Of course it fits Takina’s personality. That girl is very direct and is all in on learning about what she doesn’t understand. Chisato definitely got handled pretty well in that moment. 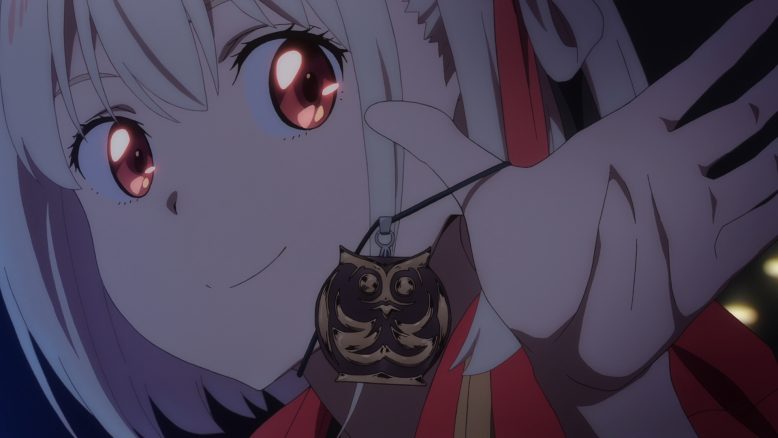 I honestly really liked seeing Takina trying to understand Chisato and trying out her bullets in the range. It shows that she is growing more accepting of Chisato’s style of doing things. She isn’t going to be using them since it just doesn’t work for her. She can’t be as precise as she wants with those things. That’s fine for Chisato since she has her godly bullet dodging skills. Chisato can absolutely get in close and handle her opponents from that distance. Takina can’t do that and so she has to stick with regular bullets. Maybe she can try to do the least amount of damage that she can with regular bullets, but that’s it.

I’m willing to be that Chisato is hiding something about why she started using those bullets. But she’s just not comfortable mentioning it. I’m sure Chisato isn’t lying about not liking how regular bullets can steal time. They can steal her time, steal the time of those she shoots, and she is kind of venting her frustration with her enemies by hitting them hard with non-lethal bullets. Honestly her change of approach has to do with the big incident she was part of. And I’m sure we’ll get to that sooner or later. But for now I’m fine with where things are. 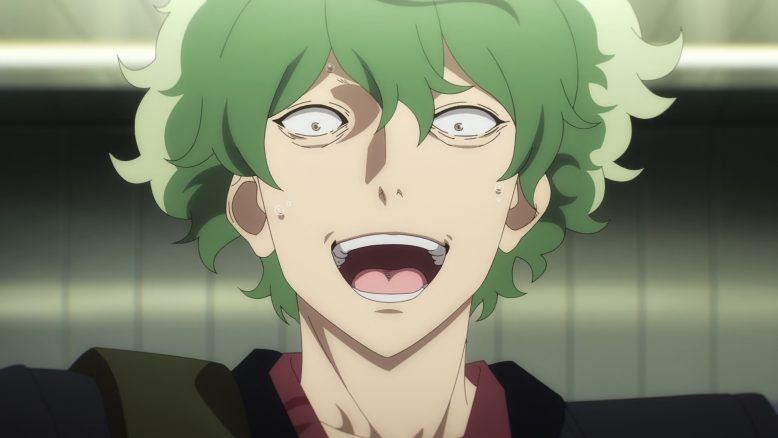 This guy is dangerous for sure

That Majima guy just made me think of comic books villains like the Joker. The guy was running around and acting a bit loose. And yet Majima still had all those Lycoris shooting at him. If nothing else, I’ll say he handled himself rather well. When pinned down he busted out the explosives and secured an escape. No question that Majima is very dangerous and very willing to use up lives for his own interests. What else can you say about his plan to shoot down a train that could have been full of people? He literally busted out the firearms Takina used and tried to use them for mass slaughter. I’m not sure what his objectives are just yet. He doesn’t like the status quo and that’s a certainty. But I’m just curious to get more from this guy.

His biggest frustration wasn’t about his guys being killed. What really upset this guy is that his whole attack was covered up. He’s really going to be gunning for the Lyoris and looks keen to do something so extreme that it can’t be covered up. Whether he’ll succeed at that I’m not sure. I half expect Chisato and Takina to stop him on his next outing and set him up to be a major threat for near the finale. All the more so since he turned down that crazy hacker’s help for now. He’s definitely not going to get killed anytime soon. Guess we’ll see what chaos he can cause. 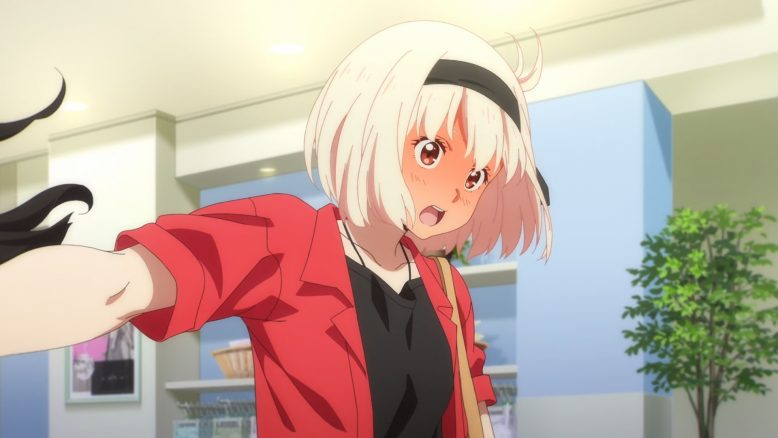 When the moment strikes!

I really had a good time with this episode. But I’ve just been having a great time with this show in general. They know what they are doing and are executing at a high level. Chisato and Takina are some of my favourite characters of this season so far. And I can’t wait to see how things turn out as they continue to get closer. If nothing else I’m really enjoying seeing Takina open up and being much more cheerful. You can feel the tension building with the way this society is set up contrasting with certain criminal elements looking ready to bust it open. But the core of it is our main pair. I hope that they can end this series still on the same team and both of them doing alright. Since it is an original series you just never know how they might want to end this.