Wow. This episode pretty much confirmed many things for me regarding Ryou – especially how she was before Kirin arrived and how important Kirin’s arrival really was for her. The “food for the week” to enjoy seemed to be ramen eaten as a late night break to power one up in between studying – though from the opening sequence I would not have guessed that. On to the episode itself then! 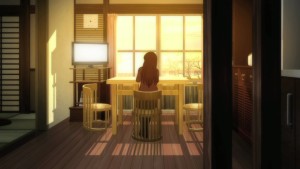 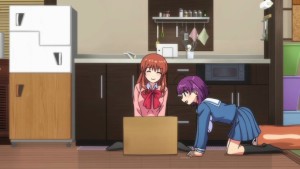 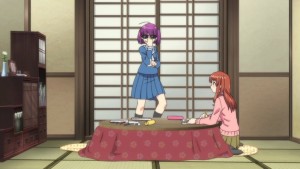 One of the most interesting things that have a little light shed on them, though in such a way that left one asking more questions, was the family situation of Ryou. Apparently they are something on the level of Mycroft Holmes?! Kirin’s mother mentioned something like “they can’t take a break from work because a whole city relies on them” (Wha?) and we hear from their correspondence to both Ryou and Kirin that they are more than willing and able to assign bodyguards for Ryou if needed (fortunately Kirin seems more than willing to step into the role of personal bodyguard, though while not a professional she could probably do a decent job in a pinch with her crazy raw physcial ability and talent). They seem to be rather … doting parents in an odd, off hand, or even wacky way (they seem to send her large amounts of odd food items completely on a whim), but also in a way that is potentially … scary. And Ryou seems to know this. I wouldn’t be surprised if part of the reason she restrains herself so much to not “bother” her parents is because she knows they would go completely overboard in answering her requests. 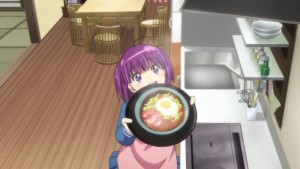 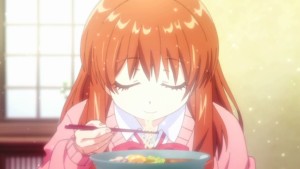 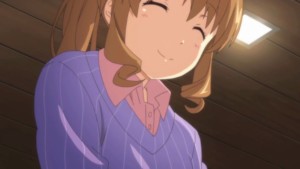 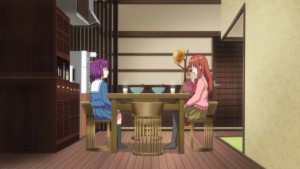 I wonder whether or no Ryou is some kind of “ojousama-in-hiding” or what not? In some ways the situation may be as it is at the moment because her parent’s line of work may be dangerous (particularly with someone of Ryou’s limited physical abilities) for their family to live together! It could be that their talk of assigning her a bodyguard(s) may not solely be due to being doting parents…. Anyway, even though lines of thought like this only raise more questions, one thing is clear – Ryou’s parents are likely extraordinarily well off financially, and providing for the apartment and living expenses for Ryou (and her grandmother when she was alive) is likely not difficult at all. 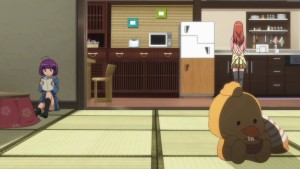 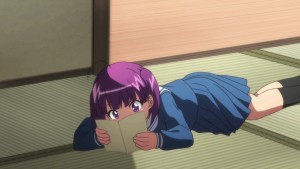 Another element emphasized was the extreme importance of Kirin in Ryou’s life up to now. We finally see a glimpse of how lonely Ryou really is. It has become clearer in many earlier episodes how much she loves, treasures and misses her beloved grandmother, but it is finally spelled out in no uncertain terms that she absolutely loves and misses her parents. But even with that she she forces herself to be reserved and not “be a burden” to them. I wonder if her parents know this in part, and now that she is holding back, and whether or no that contributes to their zeal in their “spontaneous acts of affection” in the gifts they send? It was strong when Ryou’s grandmother was alive, but the latter showered her with kindness and affection. But when her grandmother died (as I have so often stressed previously) her inner life became colorless, drab, and perhaps even desolate and laced with both depression and the normal inner pain when one loses someone close to them to death. 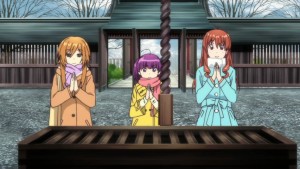 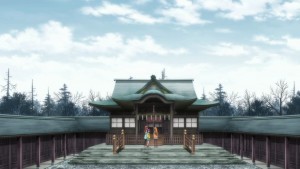 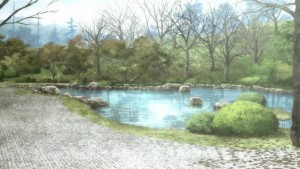 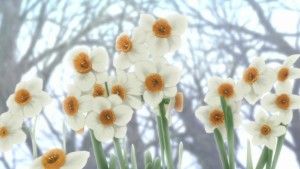 In so many ways Kirin is a god-send for Ryou, and we have seen parts of that in the previous episodes. But in this episode we also see that Kirin, though she is kinda dense in general, still is not hopelessly dense. The past year she has spent quite a bit of time with Ryou and has seen and understood some aspects of her that Ryou herself cannot see. For example, later on in the episode Ryou encourages Kirin to speak up, saying: “At times like these you should really speak your mind.” Argh! You should take your own advice with regards to your parents, Ryou! Even if nothing would change saying something would be good for Ryou. And truth be told, it becomes quite clear that Kirin completely sees that Ryou misses her parents terribly despite her repeated denials to Kirin’s repeated questions on the matter. There is even a moment when Ryou is just waking up from a nap and imagines Kirin to be her mother for a moment and practical smothers her with love, saying how much she loves and misses her in a half dazed state. In any event Kirin sees this loneliness and is not fooled at all by Ryou’s protestations – that is a good thing for Ryou, and I think Kirin is up to the request from Ryou’s parents (in a letter) to take care of and be a good friend to her. 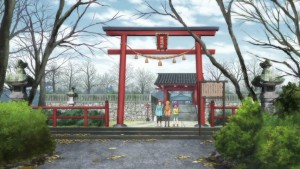 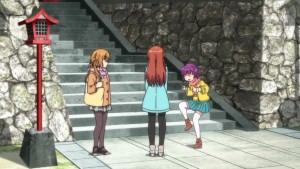 Finally, the episode focused on the narrative of Ryou and Kirin taking the exams to go to high school, yes, but did so by bringing Shiina into the picture, who already accomplished the feat in secret and in a different way! It was quite nice to see Shiina get more screen time, whatever the reason, as the trio have good harmony between one another. Also – Shiina can be downright funny at times with her off-the-wall marching to a different drumbeat. Much of the focus of the second half takes place at a shrine (beautifully animated, by the way – Shaft flexes their muscles here again) where Ryou and Kirin go to pray for success in their exams … a very common sight even today in Japan, I am told. While there they discover that Shiina has already gained acceptance into the high school they are taking exams for (much to Kirin’s competitive frustration). The two of them have been studying diligently (complete with Kirin preparing ramen to eat in between the study sessions – much to Ryou’s delight) for the exams, and the shrine visit was an extra effort made of sorts. 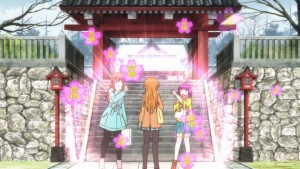 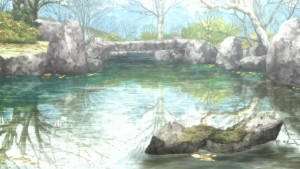 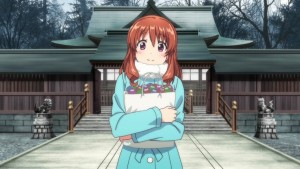 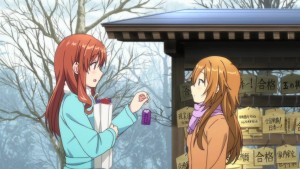 Interestingly the main point of this section of the narrative was a further step off of last week’s emphasis. Last week the focus was bringing people outside of the main character’s “inner circle” into their circle, yes, but also involves their “reaching out”. This part of the episode emphasizes how our we must be willing (and also to be aware of and grateful for) to let others provide support and help for us when we are struggling for something should they offer their help or aid. Curiously the focus for this message to be driven home to the audience is in the person of Shiina, who “realizes” that she would have had a much harder time getting in to the high school were it not for the support of her family’s “super maid” Tsuyuko making her snacks for her to eat in between her intense study sessions. When Shiina realizes this she is moved to extend the same kind of help to her friends on the day of their exams – which I thought was very sweet of her (though the “good luck imbuing” chanting in the exam location’s front hall was kinda unnerving and humorous at the same time). Even so we see here the lesson Tsuyuko gave to Ryou in episode 7 being emphasized once again, though from a slightly different angle, and not in such an upfront manner. Definitely something she will need to hear several times before it really begins to sink in, I think. 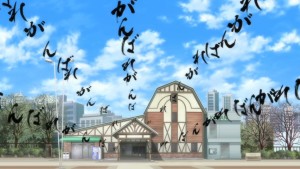 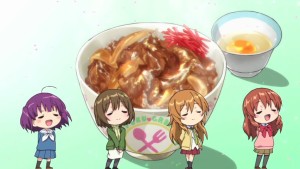 In the midst of all this I find myself where the content of this episode is heading? Of course it is likely a given that everyone will attend the same high school and that Yuki (the downstairs neighbor who loves pizza from episode 10) will also likely be employed there in some capacity. But I wonder about Ryou’s personal growth and maturity – will her parents finally make a surprise visit? Will Ryou finally begin to show willingness to “hear” what the hardest lessons of the past year she has been given (most often by Tsuyuko or those in her direct sphere of influence, it seems). We finally got an episode that focused on Ryou’s family life – an episode that touches near the core of one of the biggest factors that helped form who she is today. Where will it go from there? I am not expecting dramatic results … to be honest the manga is still very much ongoing, and I expect such things will only be resolved much later on. But I would like to see the beginning of the resolution, at least. ^^