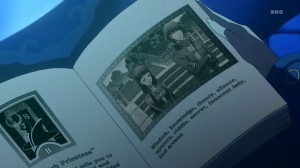 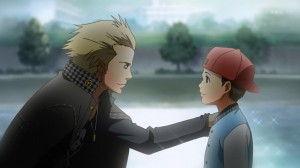 Well this time we got the…uncomfortable trip to rescue Kanji. At least they tried to insert as much comedy into this rescue as possible since for the guys this was an uncomfortable trip. Kanji’s rescue is definitely the first one where I don’t think the guys were too motivated. If Kanji’s life wasn’t hanging in the balance I think they’d put off the rescue XD. Despite the comedy this was the closest call for the group so far and they could have easily lost.

The comedy was plenty of fun this time around. Chie especially carried it having to be the serious one for long stretches before then losing her head during the fight at times. The guys were completely unmotivated or motivated to just not be there. More than once Narukami suggested leaving showing he really was used for laughs more this time than in previous episodes. Maybe the most entertaining parts was before they got into fighting Shadow Kanji. He used a great move to slick the entire floor with oil. Can’t say I wasn’t with Yosuke when he asked if Narukami had a camera with him XD. Just aren’t going to get a scene of those girls slipping in oil that often. 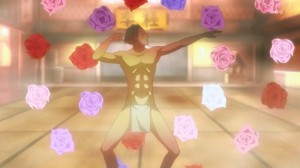 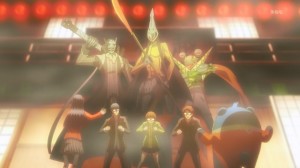 We learned some more about Kanji because Kuma was struggling to find him. I can understand Kuma having so much on his mind since interacting with the others has shown him a different existence compared to how he’s been living to this point. We learned that Kanji had a softer side and wasn’t just running wild because he wanted to fight. The biker gang got crushed because they were bothering his mother. And you just don’t mess with a guy’s mom XD. The fact that he made that little bunny had to be much more surprising than anything else. Tough in a fight, but he’s quite talented when it comes to crafts. Of course looking at the kind of place his mother runs you’d figure he would be exposed to that kind of thing especially since we haven’t seen any sign of another sibling.

Kanji was a lot deeper than just being interested in guys. Not that it isn’t a possibility, but rather he just wants someone to accept who he is. Probably was closer to girls because of his interests and so their responses to him being interested and good at that sort of thing would impact how he viewed people. But he probably figured that guys wouldn’t accept him either so he just became tough so no one would have the courage to approach him. His shadow reflected a teenager who isn’t sure about things and wants people to accept the complete Kanji. Not just the guy who likes to make things, but also the guy who is strong. 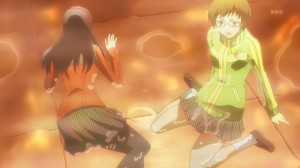 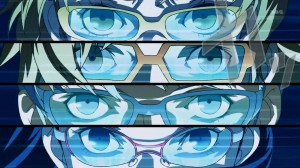 The fight was pretty crazy. This time the sub-bosses got involved which makes sense since now there were 4 personas to fight against. The fact that each had different resistances (which is easier to tell in a game) made it tough for Chie and Yukiko especially. For Narukami and Yosuke it was more an uncomfortable fight. Narukami kept having to try and switch out since his personas were getting grabbed and hugged. The girls were just getting angry for different reasons. It seemed like one of the shadows was pitying Chie XD. Still nothing worse than enemies that enjoy the girls attacks and feel up the guys….

Maybe the best part of the fight was Narukami using Persona Fusion for the first time. Interesting how all this velvet room stuff is going on during the battles, but I guess it makes for more entertainment and tension. Instead of just getting to see the moon persona that Narukami obtained we got the moon from a fusion of the Empress and Magician to get Yamata no Orochi. It’s somewhat a strange call since Yamata no Orochi is actually weak to lightning. But it was a good choice to help restrict those helpers of Kanji’s Shadow and get a good hit in. Plus really I actually liked that persona so picking that one for the Moon (unless he summons a different moon or uses it in a fusion) was a good choice. In my mind one of the best they could have chosen since there are some odd ones.

They did hurry things along at the end which is too bad, but can always play with the calendar later. I do like how they slipped in Dojima asking some tough questions to Narukami. Obviously it is weird how he was walking around with someone who went missing to talk to the mother of someone who is currently missing. Luckily Nanako appears to be Yuu’s defender so some chances to stay out of trouble. 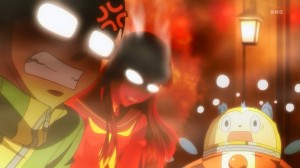 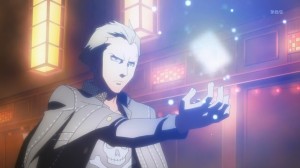 It’s good that they have Kanji ready to support them going forward. They’ll need all the help possible as they go forward. Considering the game actually had a max of 4 characters in a fight I wonder if they’ll just add in more enemies to future battles? Either way I’m looking forward to more. Though one might ask if they can match up to Kanji beating up his own shadow XD.
Score: A-