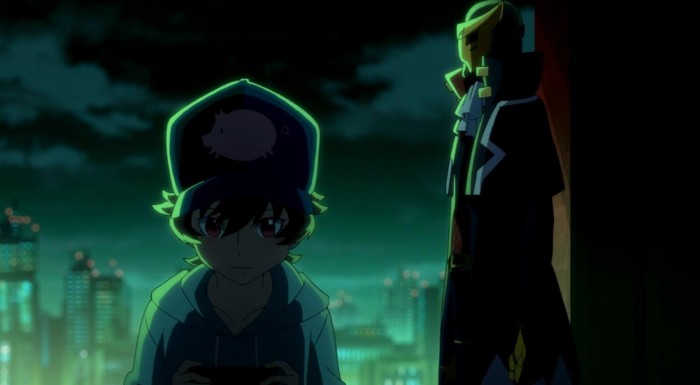 First you think it’s good, then you know it’s great. Dimension W continues to provide a solid and strong science fiction offering in an era when those kind of series are few and far between. I honestly couldn’t be happier, not just because Dimension W is turning out to better than I initially thought, but also because it’s actually a prime example of how to do Science Fiction right. 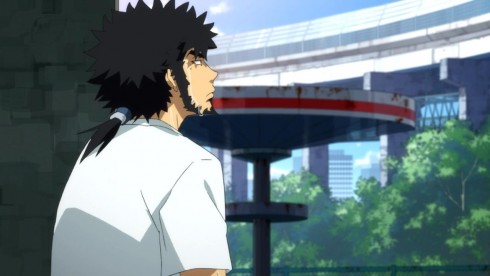 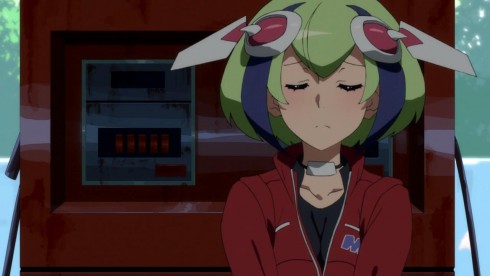 There are many markings of a good sci-fi story, but the best ones, in my humble opinion, take some kind of out of this world idea, and build its entire world, its story, its conflicts around that idea. For Dimension W, its the idea of the W Dimension and the whole concept of these coils that harness that energy.

One of the bigger issues facing our world today, beyond the obvious ones like world hunger, diease e.t.c is that our world is powered by an energy source that isn’t infinite. Its actually a looming threat, but at some point we’re going to run out of fossil fuels, and then we’ll either have to adapt or turn to some other form of energy. Our current world’s status quo, the usage of fossil fuels, is also hurting our environment itself, so the energy crisis, is a pretty big problem that’s looming around the horizon. 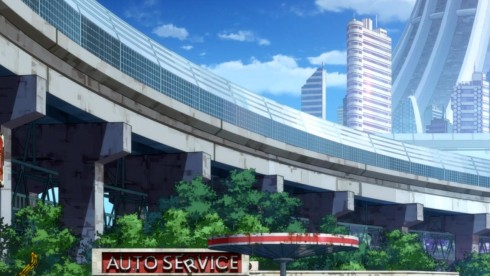 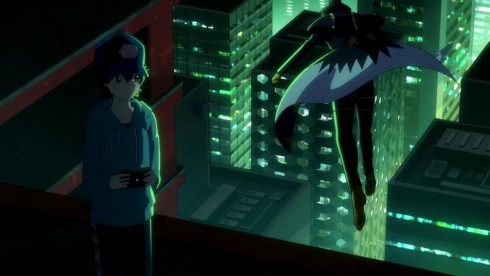 Dimension W’s (The show) whole world and story is built around the idea that humanity has solved the energy crisis, but the discovery of this new Dimension W, and has found a way to harness that energy. Now… Last week we learned that our main character, Kyoma, wasn’t a huge fan of the new technology, Coils, and was very much a sort of “relic” of what we’d call our modern time. It seemed like he had a very personal reason as to why he hated coils, but it seems like there’s more to coils than meets the eye.

This week, we learn the more believable, double edged nature of the new W Dimension, and the devices known as coils. It all starts with the introduction of another solid character, Loser. Despite the name, Loser’s whole story is pretty incredible and well done. Going back to what I said about good sci-fi using its core idea as a framing device for all its narrative, Loser’s origin story and purpose to the story is tied to coils as well, and the story itself isn’t pretty. 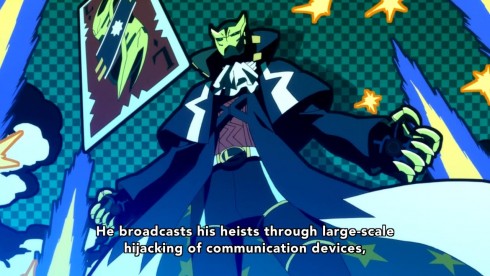 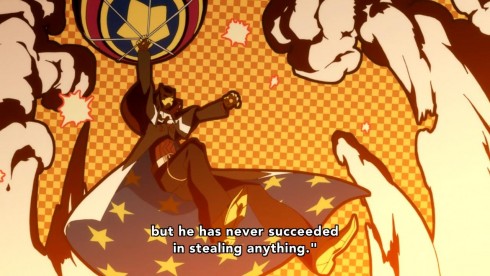 Loser is what you’d call Dimension W’s version of Lupin the Third (kind of?), in that he announced what art treasure he’s going to steal, and makes a big spectacle out of it. The wrinkle to the whole formula, however, is that Loser never actually succeeds in stealing the peices he sets out to grab, hence the name. That’s already an interesting character right there, a thief that hijacks modern communication devices, broadcasts his entire attempt, and rarely if ever actually succeeds.

At first, the show itself throws out the theory that Loser is doing all of this as some kind of publicity stunt for the very art pieces he tries to steal. And honestly, that would’ve been fine, and a pretty solid idea. I could totally see a modern day thief, using illegal coils to put on this show, and him and Kyoma clashing. He’d sit on the throne as a worthy little side villain, one that’d come and go in the story, kind of like the riddler from Batman (or something like that). 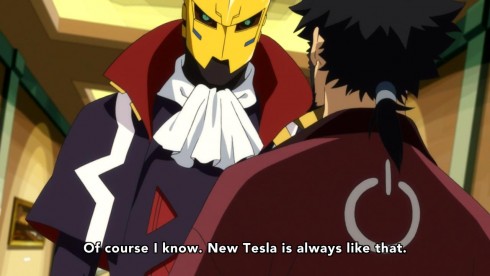 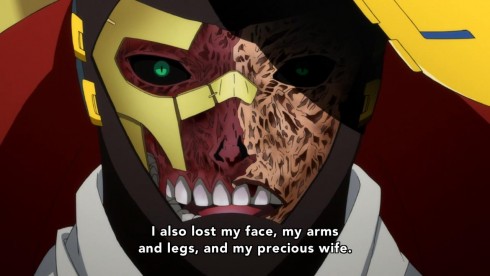 But that’s if Dimension W were a lesser show. Loser’s story is anything but just that surface level. It turns out that he’s actually hunting specific coils that are hidden INSIDE those art pieces, which he calls numbers. He seems to know more about the illegal coils, the New Tesla Corporation and whatever shady dealings are happening behind the scenes. And he’s not some psycho or weirdo in a mask either, Loser’s actually face is hideously deformed and destroyed, and its only via the mask that he’s able to hide that extremely scarred face.

What’s interesting though, is that its only latter, that you put two and two together, and realize that Loser’s face is the way it is because of a phenomenon known as a Dimension Collapse. We see first hand what a Dimension Collapse is, when Kyoma and Loser tussle during one of Loser’s art heists. 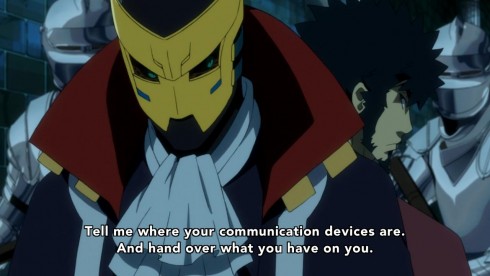 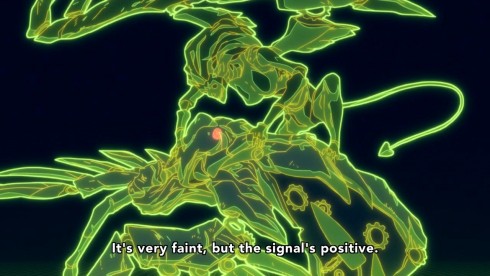 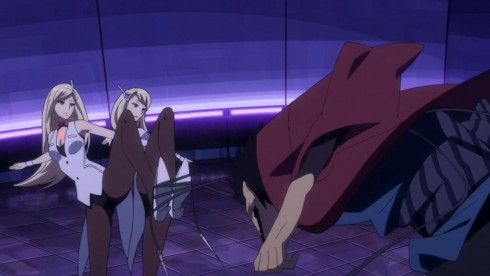 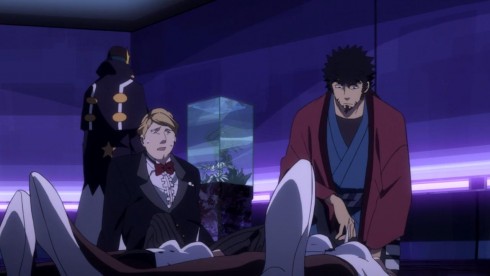 Loser is after a sculpture in an Art museum, and it turns out the owner of that museum is dealing in illegal coils, and unknown to even himself, is housing one of those numbered coils that Loser seems to be hunting. To make matters worse, during the insuing battle between Loser and Kyoma, The owner actually ends up sending two of his androids, both using illegal coils on Kyoma.

Kyoma dispatches them, of course, but the real tragedy happens when the police shows up and the owner tries to hide evidence of his illegal doings. He inadvertently triggers that Dimension Collapse, and it turns out that the illegal coils go haywire, warping the space and the matter all in that space, to an irrecoverable degree.

The Owner? He’s a been broken up, mixed in with the robots and the surrounding rubble, and turned into one nasty, gorey piece of abstract art. Words don’t justice to the rather bizzare, horrifying scene, so lets just let the screenshots do the talking: 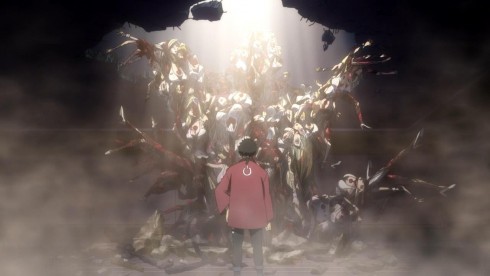 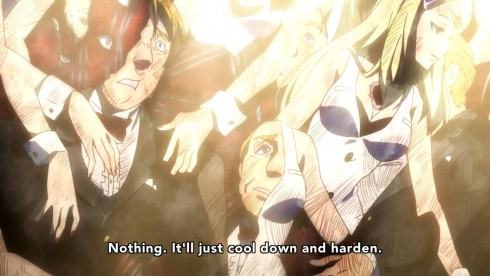 Man, that scene is just… Disturbing. That disturbing nature though, that element of gore and horror, is a pretty good staple of solid sci-fi though. Sci-fi is as much about the horrors and danger of science as it is going into some kind of different, fictional world. The coils and the Dimension W? There’s a pretty scary, twisted side to them, and its interesting that the New Tesla Corporation, the ones that provide the technology that powers and runs the world, are covering it up.

Again, its just such a layered approach to both the world and character building. There’s the New Tesla Corp, and their whole shady corporate stuff, there’s the dark side of these coils, there’s the fact that Loser himself seems to have lost his face and his wife in a horrible accident that they covered, and of course, our main lady Mira, who herself seems to be tied coils and her creator herself fell victim to the Tesla Corp. 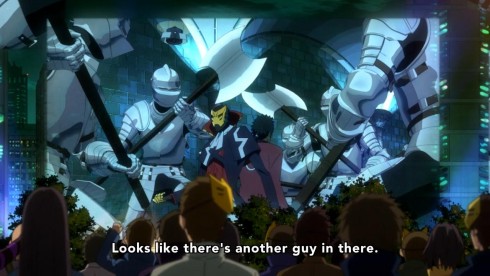 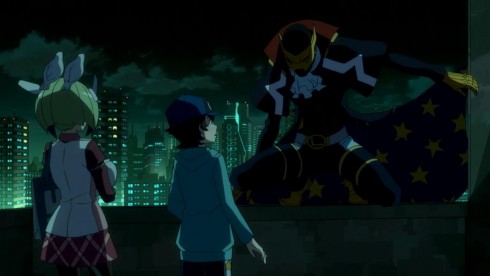 And its worth noting, that Dimension W doesn’t just slot its characters into cliche roles. Loser isn’t a villain, or even anti-hero, he’s a sort of wild card, with his own goals and ambitions that seems to be operating in this twisted world that’s been brought forth by the Tesla Corp and these illegal coils. And Mira? She lost her creator to that same Tesla corp and then later also lost her “father” to the same thing.

Speaking of Mira, I did like how Kyoma and her kinda nicely slotted into a sort of partnership this week. Its not like the two really like each other yet, but I’m appreciative of the fact that Kyoma isn’t being some kind of hardass or a jerk to the girl that’s just trying to do her best. He lets her do her thing, and he does his thing, and they kind of work in tandem without getting in each other’s way. 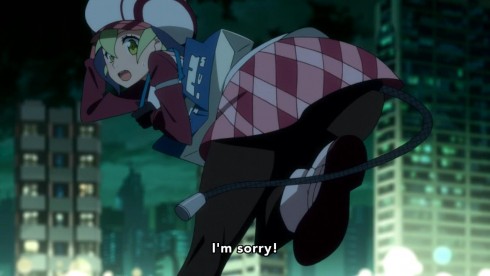 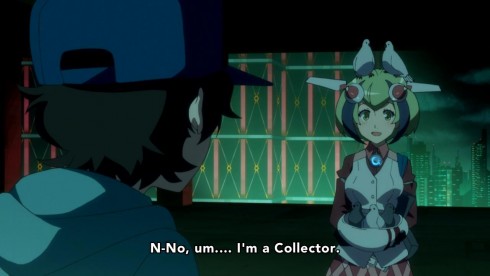 It works pretty well too. While Kyoma’s on the front lines dealing with Loser, Mira ends up going around finding the illegal coils that his son is using to power their communications. The whole idea of birds carrying illegal coils, and then Mira basically tracking them down through some pretty intense detective work and observation, was a nice little bit of flavoring to what was both an action packed episode, and a fairly thrilling emotional experience as well.

And in keeping with the tradition of not slotting it’s characters into some kind of “cliche role”, while Loser does happen upon Mira and his son, he doesn’t do anything terrible to her, but instead commends her and realizes that Kyoma actually has a pretty handy partner of his own. There’s an almost “two sides” of the same coin aspect to both Kyoma and Loser, except that one actually has a human kid that’s fairly bright, while the other has a powerful android. 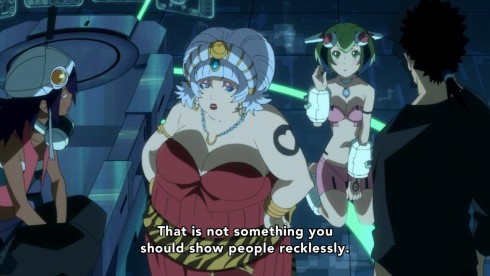 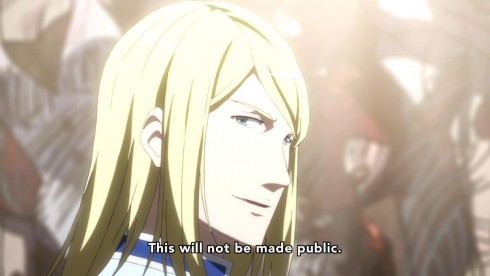 Its not just Kyoma/Mira and Loser either, the other supporting characters are equally interesting and hard to really pin down. There’s Albert Schuman, who I didn’t really talk about in the premiere, but he seems to be part of the DAB, a task force that seems to deal with The Tesla Corporation’s more sensitive Dimension W related matters. He seems to know Kyoma, both respects him and wants him to work under him. He doesn’t seem inherently evil, but he’s got a very “I operate inside of the system, even if the system is rotten” boy-scout feel to him. Yet he’s also got a slightly sinister edge to him, probably because he’s being voiced by Ishida Akira, in a slightly unnerving version of his general performance.

There’s also the supporting cast, Like Mary, the rather large, odd looking woman who employs Kyoma, and also sets up his whole partnership with Mira. Again, we saw her in the premiere, but she’s a nice part of the cast that gives life and color to the world, and almost acts as the big “moma”, gangster boss like person in the grand scheme of things. 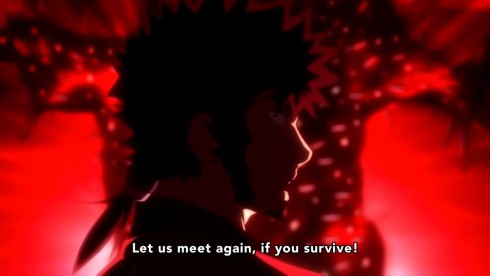 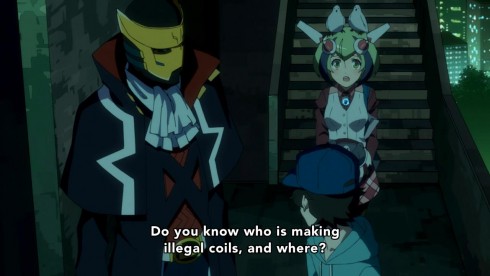 To sum it all up, I’d say Dimension W isn’t just a good trip down sci-fi memory lane anymore, it seems like its a show that’s got some real depth and an interesting idea behind it. The only problem is, of course, that this is a one cour show, with an ongoing manga, so it’ll be interesting to see how much this show ends up showing us, and whether it amounts to something beyond being a really solid introduction to its larger franchise.

At the moment though? Its hard not to be excited about something that’s this different and this good! Also… Aren’t the OP and ED just fantastic? I mean MAN, I just love listening to that OP before the episode starts. 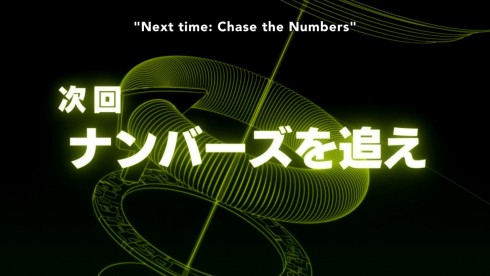 Seems like the numbered coils are going to play a larger role next week. See you all next week!