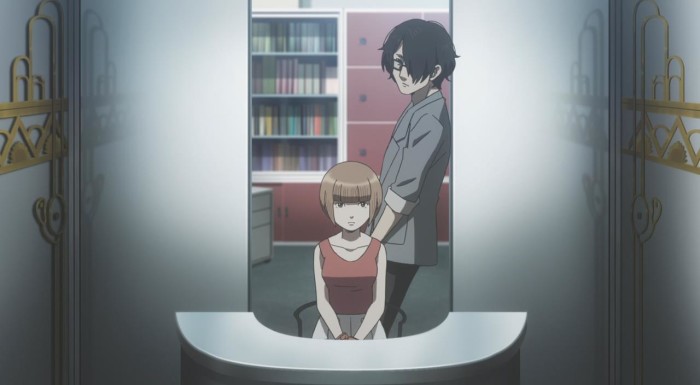 There are two kinds of narratives in Anime these days. One is the kind that moves linearly alongside the viewer, revealing its moments, twists and turns in real time. The other category, of which Subete ga F ni Naru seems to be a member of, is a story whose events have already taken place, and its actual enjoyment and mystery comes from HOW the story is told, rather than the story itself. 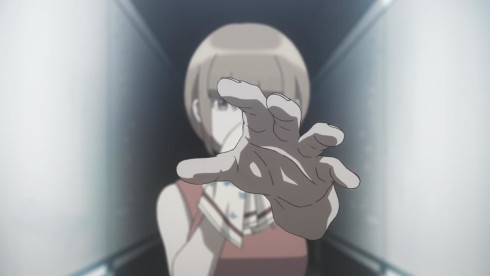 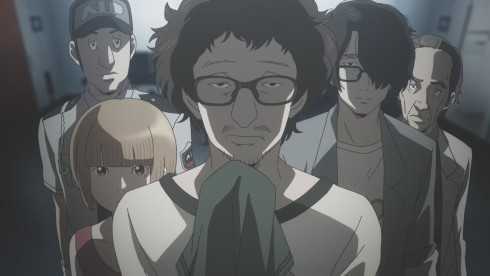 I suspected it at first, but now I’m quite sure of it, the entire experience of SUbete ga F ni Naru is very much about understanding what it is and what its trying to say. That’s the mystery, the big riddle, and the one that keeps both me and everyone else that’s watching the show, coming back for more.

And what a solid mystery indeed, because as was the case in the last three episodes, nothing is as it seems. At any given point in an episode, the story can just cut back to a flashback or an unrelated scene to the present time, and completely change the dynamic of the story, the characters and the nature of the story itself. 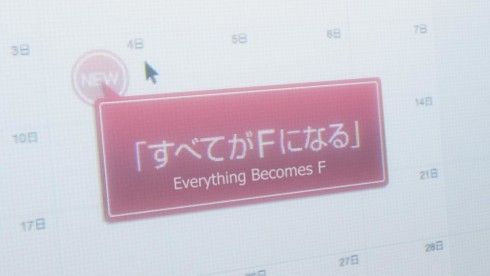 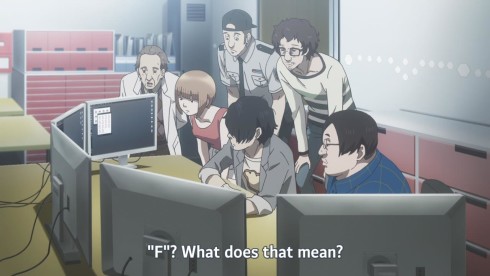 Its kind of impressive how simple the actual structure of the show’s story really is, and how elegant it is as a result. There are three parallel storylines. Each at different points in time, that are interconnected, and that the show alternates between, giving us little nuggets of information, and slowly revealing what we assume, is the big picture, the answer to all the riddles.

“Everything becomes F”, Its unclear what exactly that phrase entails, even if it is referenced in the episode itself this week. My inclination, my feeling from the show so far is that everything is actually converging towards a certain end point. Those three parallel plot lines all seem to be slowly developing towards a common end. What that end is, whether its a resolution to the story at large, or something else entirely, remains to be seen. 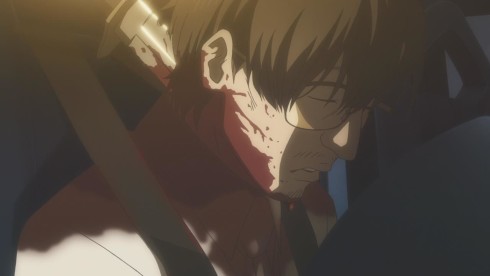 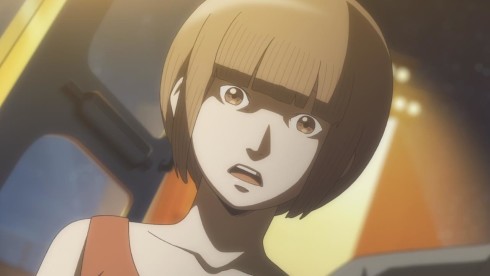 What we do know, however, is the exact nature of the three storylines in play at the moment. The first of those storylines, is obviously, the murder of Magata Shiki and the director of the Lab; the locked Room, deserted Island Mystery. This is happening in present time, and its where both Moe and Souhei are the featured protagonists.

And I have to say, it was this week, that I started to truly feel engaged with the present day mystery, as characters began to behave much more naturally than they had in previous weeks. Moe, for example, was clearly unhinged by the second murder she had seen, and any joyful or playful glee at a murder mystery quickly went away, replaced with a genuine sense of fear and panic. Moe behaved like any regular, albeit practical and smart person would; she started to focus on analyzing what had happened in a hasty attempt to cope with the extreme situation. 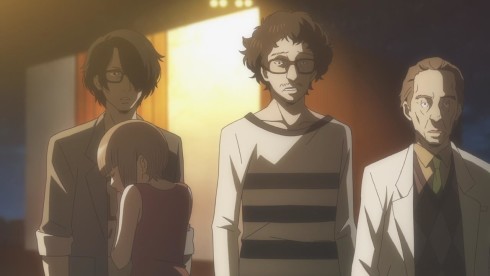 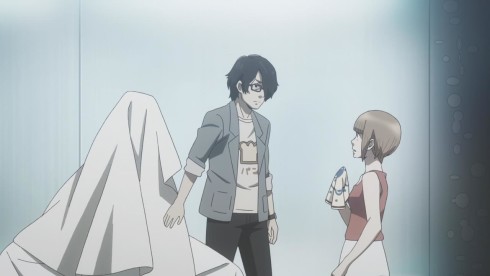 Souhei too, was a bit more taken a back, though you could only see it on his face, as he continued to maintain that facade of “calm, collected and logical”. Yet even that facade started to develop some serious cracks in it. Souhei began to urgE Moe to drop the matter of the murders, to not get involved any further and leave. The fact that Moe wouldn’t leave, meant that Souhei couldn’t either, even if he himself quite wanted to do just that.

Its an interesting situation, if only because its Moe that’s actually the one most driven to seek answers and uncover what exactly happened to Magata.  That of course, brings us to the other two storylines, both of which, involve Magata Shiki in some major way. 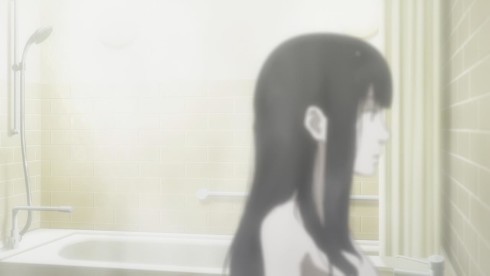 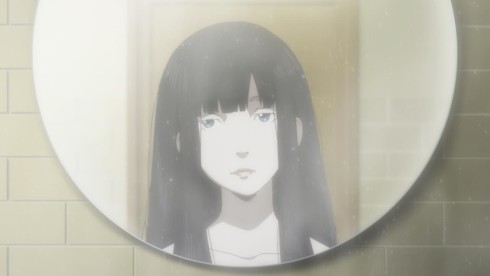 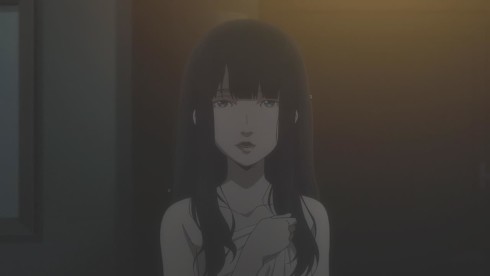 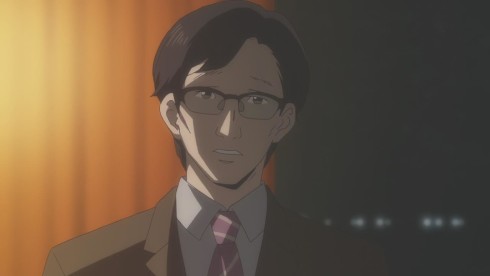 The second storyline, is very much about Magata Shiki’s past. This seems to relate more or less with the man that she had the affair with as a 13 year old. This week we got a clear reveal as to the face of the man, and it turned out to be none other than… erm… I actually still am not sure who this guy is. All we have is a face, a voice, but I still don’t think the show’s given us enough to truly understand the identity of the man in question. Who is the man? How does he relate to Shiki? What exactly happened between the two and how did it end? Its the answers to those burning questions that we slowly seem to be edging towards.

What significance Shiki’s affair with the man has on the larger story isn’t clear, but what little IS clear is that it seems like its important. And while there is that sense of importance, what really blows me away is how intriguing the mystery is on its own. I’m genuinely curious about what exactly happened to Magata Shiki, why she behaved the way she did. Its a morbid, twisted and kind of messed up storyline, but one that nonetheless, beckons the viewer to continue to ask questions. 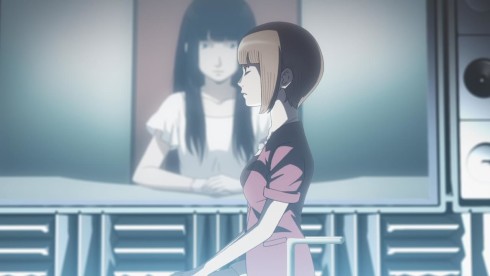 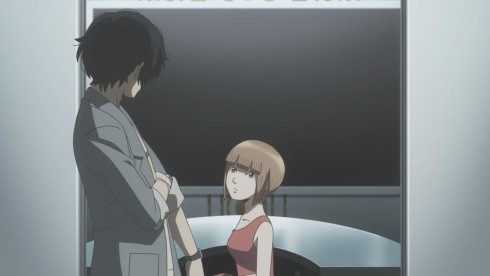 Speaking of questions, the third and final storyline is a single, self contained conversation. Its the conversation between Shiki and Moe of course, one where the two women actually seemed to have exchanged quite a bit more than the audience was led to believe. If there was a high point, or a seminal part of the show, I’d actually call this third storyline “it”. Its just fascinating to see the small bits and pieces of the same conversation slowly trickle into the narrative, and fundamentally change and alter everything.

Its the simplicity of the moment, the victim and the protagonist having a conversation prior to the victim’s death, that makes it so powerful. And this conversation has its own questions. How do Magata Shiki and Nishonono Moe relate? Did Magata Shiki really kill her parents? What’s up with her multiple personalities? And why did Magata Shiki take an interest in Moe herself? Intriguing questions, and with as much of a draw to them as any of the other stories. 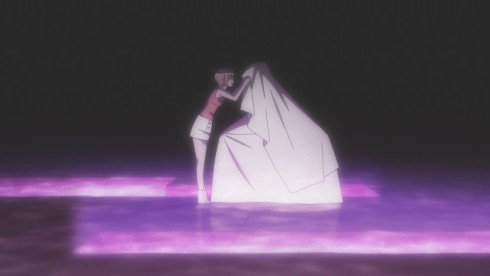 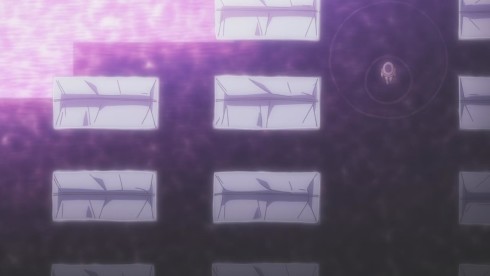 But while these three story lines do seem to be told to us in a parallel fashion, its because of their place at different points in time, that these stories beautifully mesh into one another. There’s a mention of Magata Shiki’s multiple personalities that comes from Souhei and Moe discovering a readme file on the good doctor’s computer. That of course, leads us into a flashback of Moe’s conversation with Shiki, and we learn even more about the seven distinct personalities, and how only the personality known as Magata Shiki would have any motive to kill her parents. 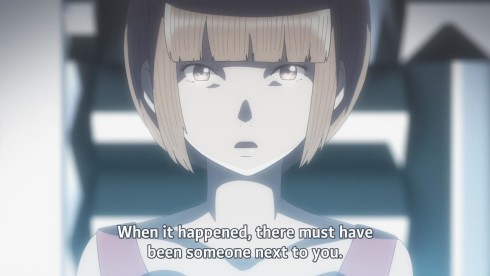 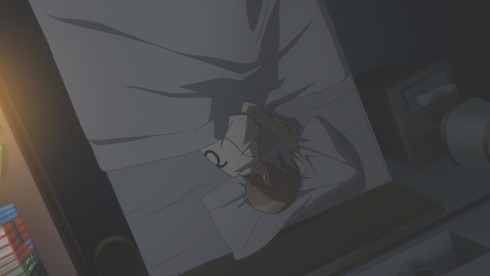 And once the episode is said and done, and once all the information is dispensed, I simply can’t help but marvel at how Subete ga F ni Naru pulls it all off. There’s elements to this show that almost make it feel like a video game, a visual novel, but its very much an anime show that gives you the experience of discovery in the same way those more interactive mediums do. By making you think, by cleverly playing with time, and carefully revealing bits of information in a deliberate fashion, the show very much becomes a journey of discovery, more so than anything else.

I’ll admit it, I had my reservations about this show, but its pretty much sold me at this point. I’m all on board for the full ride now, and I’m curious to see what the answer to all these questions is. Who or What is Magata Shiki? How did she die? And why does her last Calender entry beautifully throw in the show’s title: “Subete Ga F ni Naru (Everything Becomes F)”? 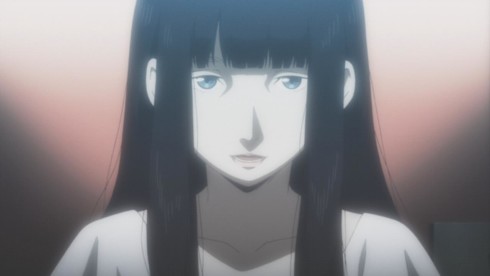 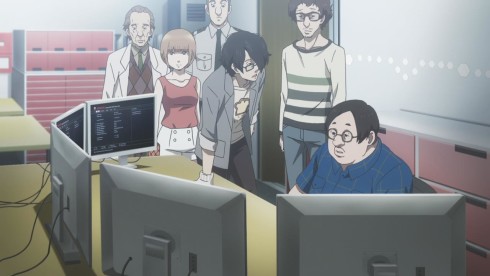 I can’t wait to know more. My brain is almost hungry for more little tidbits of information, to devour, to put into place and eventually get the whole picture. If Subete Ga F Ni Naru can keep this delicate balance of clever storytelling, believable yet eccentric characters, and contemporary cyberpunk, then well… We might have a bona fide classic on our hands.