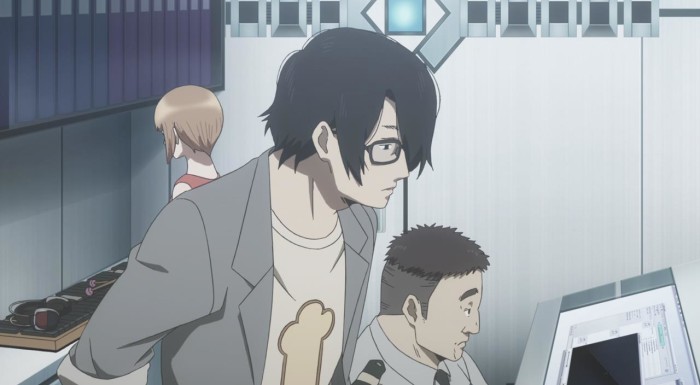 You know… There IS such a thing as being too clever and self aware for your own good. I’m really starting to think that Subete ga F ni Naru is just trying to be too clever, too smart, and it may not really have much substance behind it. At the same time, its still unclear as to what the series actually is, what its trying to say. I suspect, that we won’t really get an answer until the final few episodes of the series, if that. The thing, then, that’s simultaneously intriguing and frustrating about Subete ga F ni Naru is that it really is hard to understand, to pin down, and therefore has the infinite potential to be good or bad. 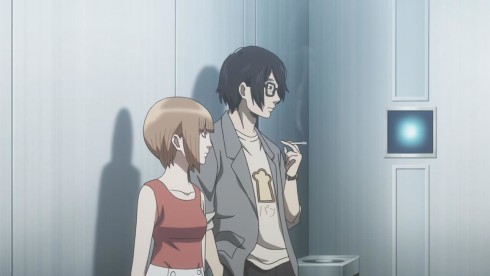 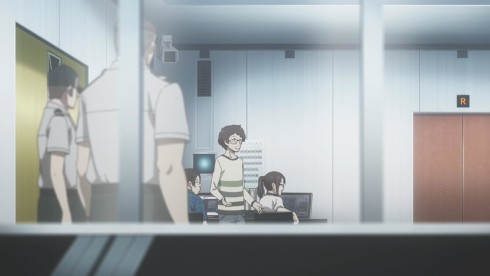 I think its that sense of the unknown, that makes the experience so detached. Subete ga F ni Naru hasn’t really revealed what it is yet. I mean… Even though we’re three episodes in, this episode itself felt very much like the real beginning to the story. But even that beginning gave a sense of something being incomplete.

Following last week’s cliffhanger, we find that Dr.Magata is indeed very much dead, and the show quickly becomes a closed room murder mystery. Or does it? That’s I think the question that the show at least wants you to ask, as it dances around the idea of Dr.Magata’s death, and almost feels uninterested in the whole ordeal. 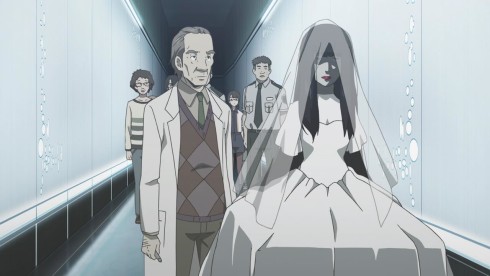 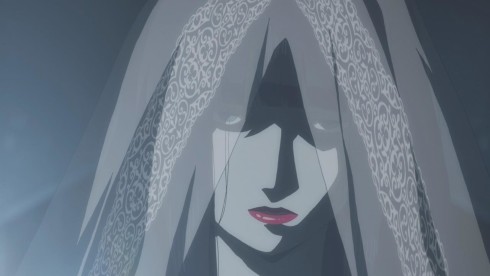 That disinterest, I think, is largely felt through the characters. Despite the rather shocking discovery, neither Moe nor Souhei are all that fazed by what they see. There’s a calmness, a detached-ness that feels odd, unnatural. That sense of detachment, of being unnatural seems like its something that the show’s going for, content, instead to focus on the past rather than the present.

While there’s the pressing matter of Magata’s death, its in the past that we get most of the episode’s content. The episode flashes back to Magata’s discussion with Moe, and Magata begins asking her some rather personal questions, about herself and her love life. If there’s an attempt to bury subtext here, to be clever, then its clearly lost on me. The whole implication that the show is making is quite obvious. 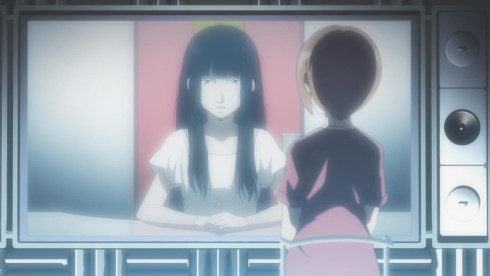 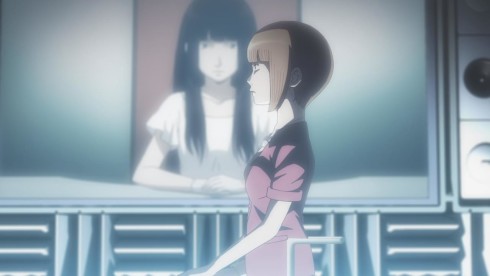 The talk about love and about losing one’s parents (something that’s common to both Moe and Magata). There’s some interesting similarities between the two women, but the one difference that stands out is actually Souhei. The reason for Moe’s affections for him are pretty much laid on the table this weak; he’s just smarter than her. Finding someone that was smarter than her was just enough to give Moe some color in her life. As Magata points out, she never quite got that.

But the highlighting of the differences and similarities between the two girls, to me, seems to be driving at something. There’s also that odd scene at the end of the episode of a clearly statutory rape scene that involved Magata and an older gentleman (whether its Moe’s father, or the director of the lab, I’m not sure of)… All of these point to a very simple idea, so much so that I wonder if this is some kind of misdirection from the show. 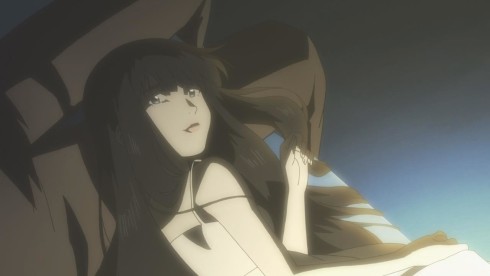 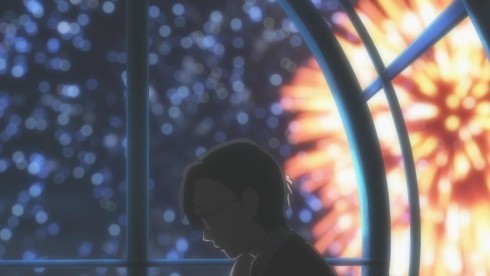 Is Moe actually the child that Magata had with that older man when she was 13 years old? It seems like it to me. Was Moe actually born of some kind of odd learning experience that Magata wanted, given that, as the narration in the episode says: “She had lived a good long 13 years and absorbed all she could”. Possibly, Possibly…

The problem I have with this whole concept is that I’m not entirely sure what it adds. Regardless of whether Magata and Moe are related by blood, there’s definitely some parrallels between them. The show is definitely highlighting that aspect, without much subtlety or nuance, I might add. For me its just hard to tell whether Subete ga F ni Naru is acutely aware of what its doing, or just putting on the air of being smarter than it is. 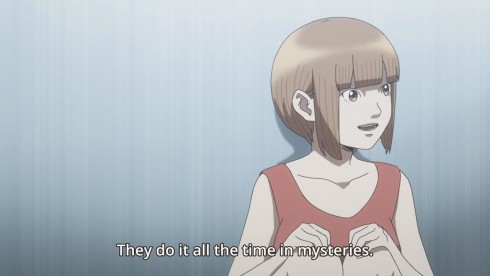 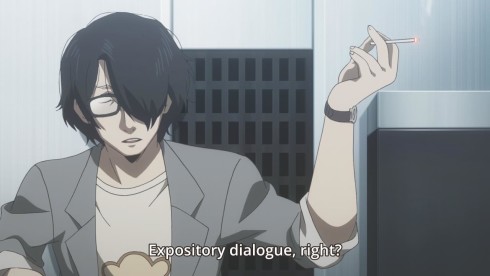 The whole expository dialogue jab that Souhei and Magata made was a bit too on the nose, and seemed like something a literature major would write. Its got that tongue-in-cheek, insider like edge to it, and yet it doesn’t at all feel or sound clever. It just feels odd and out of place. I suppose some of that is because of how bizarre everyone’s reaction to discovering Magata’s body and the fact that a killer might be on the loose, really is.

Its not just Souhei or Moe either, everyone seems to be pretty well adjusted to the whole thing. Whether its the female programmer talking loving about her code, the security guard acting like he’s giving a tour of the facilities, or the other security guard and a lab researcher just debating on whether a killer could have actually killed Magata in her room, it all just feels off. 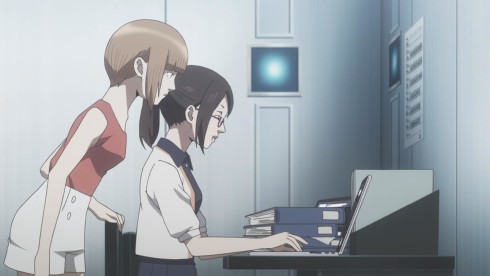 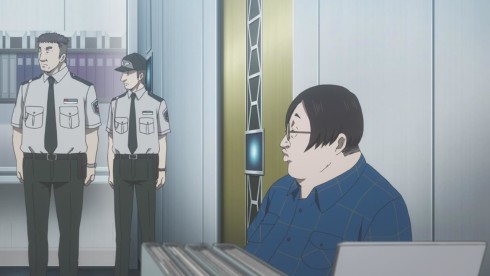 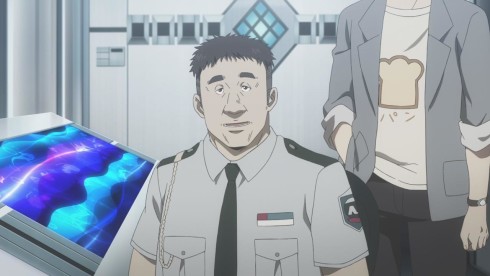 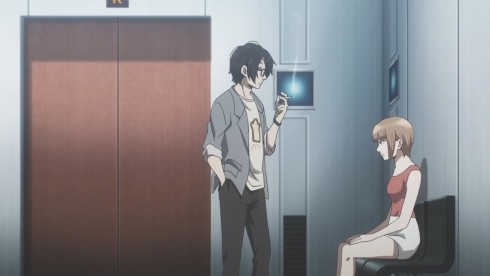 I guess what I’m driving at is that it feels off, in a bad way. The bizzaro feeling that the series is generating feels almost artificial, and unlike what I’ve even felt from psychologically frustrating experiences like Serial Experiments Lain or the original Ghost in the Shell movies. There are some things that slowly driving the plot forward. Magata’s younger sister appears on the scene, and the director obviously gets killed as well, so the closed room mystery has now become a “trapped on an Island with a murder” scenario as well. There’s just something inherently problematic about the fact that these things are just kind of side notes, quick things that need to be there to advance the plot and are glossed over.

There’s the question of what exactly the murder mystery is being superseded for… But more importantly, we’re three episodes in, and I guess I expected that we’d have some kind of hint as to what the show is driving at. We don’t, and Subete ga F Ni Naru continues to be the same odd puzzle that its always been. Going into this episode, I admit, I was thinking I’d drop the show at 3 episodes, and part of me feels like I should but… I think I’ll hold off. There’s some strange part of me that’s still curious, curious about what exactly this show is and what it will turn out to be. 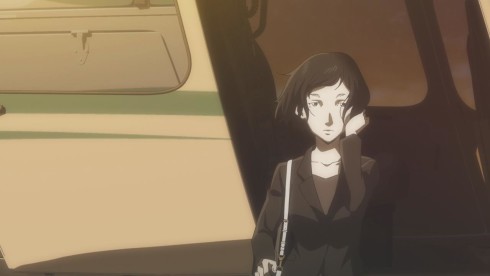 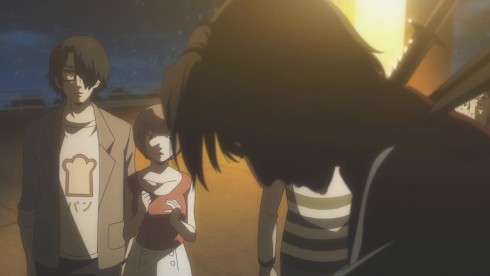 If nothing else, I’d hesitantly call the show a bit of a success for that reason. Its got me curious, even if I am teetering on the edge of disinterest. If nothing else, writing about this show remains a fascinating exercise in itself. And on that note, I occasionally say this but… I really am curious as to how people are feeling about this show. What are your thoughts? What do you think of my theory on Moe and Magata’s connection? Sound off in the comments, as more so than most, I think this is an episode and a show that could use some discussion.