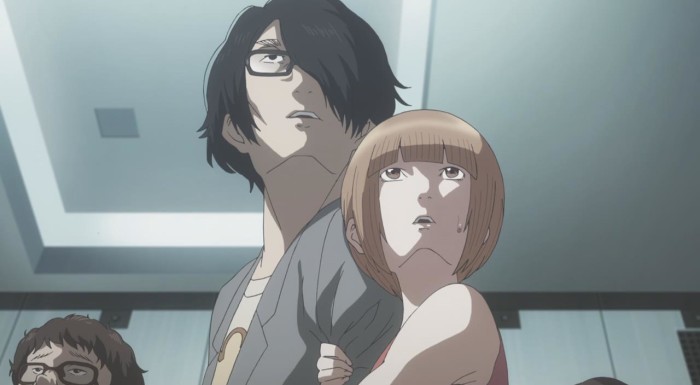 As if the series itself sensed that it had gone a bit too far down the philosophical rabbit hole last week, this week’s episode dialed down that aspect of the show to a pretty decent degree. Two episodes in, and I think the questions of what exactly Subete ga F ni naru is, what kind of show its trying to be or what its trying to say… Remain very much unanswered. If anything, the events of this week’s episode only continued to muddy the waters, and make things even foggier than last week. Its still to hard to place Subete ga F ni Naru in any kind of box, but its hard to argue that that’s very much the point of the show itself. 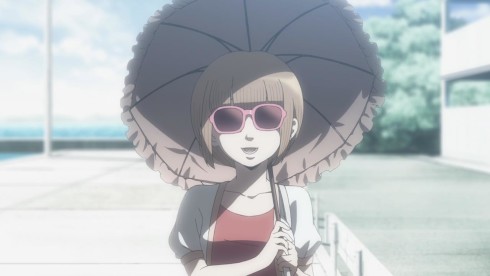 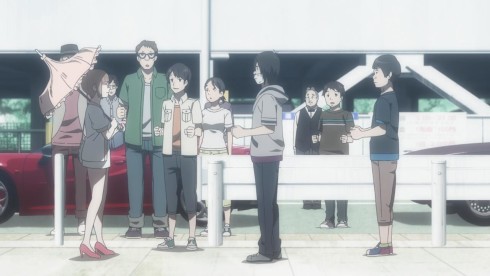 That’s also not too different from what I said last week I suppose. The show is still very much slowly but surely revealing itself, and in doing so, continues to add more layers into something that’s already got a fair bit of complexity to it.The most notable addition this week, was the inclusion of a pretty solid psychological horror element. The series had exuded a sense of creepiness in the premiere, but it definitely felt a lot more pronounced in this week’s offering. I suppose that’s to be expected, as it more or less stemmed from  a tone that the premiere had very well established.

The one thing I did find markedly different this week, however, was my level of engagement. I actually found myself losing that feeling of being a more passive viewer… to a certain extent. That sense of detachment was still there, but much like the more philosophical babbling from the show’s dialogue, it felt a lot more dialed down. In some ways, this week made the show feel a lot more contemporary, a lot more modern, while it kind of kept a bit of the more 90s era of sci-fi in more of its periphery. 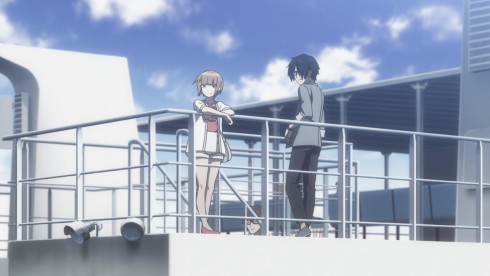 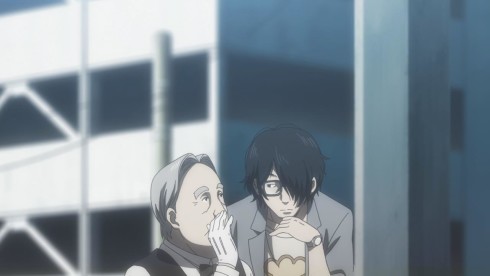 Moe was more or less the emotional anchor of the show last week, but I found myself warming up to Souhei a lot more this week as well. I’m also beginning to get, at least, why Moe is so enamored with the guy. There’s no doubt that Souhei is an odd fellow, but he’s got a likable quality to him. He’s honest, pure and unapologetic in who he is, and he’s got that odd intellectual philosophical side, but he’s not nearly as obnoxious or hard to deal with as first impressions may have led me to believe.

I rather enjoyed his interactions, first with Moe’s butler, and then  with Moe herself. I liked how Souhei is almost the personification of the phrase “Show, don’t tell”, almost to his own detriment at times. When Moe posed the question of whether he was with her because he wanted to, or whether he was simply tolerating her, I loved his response. 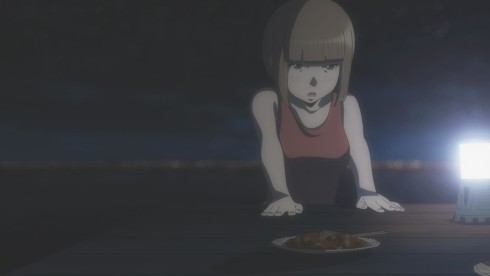 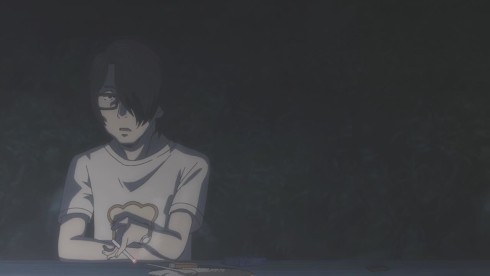 The matter of fact kind of tone in which he said it, was kind of fascinating in a way. It showed how much of an odd enigma Souhei is. Even the simple act of reassuring the girl that’s interested in him has to happen in such a weird way. 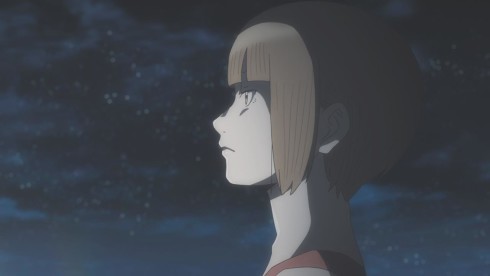 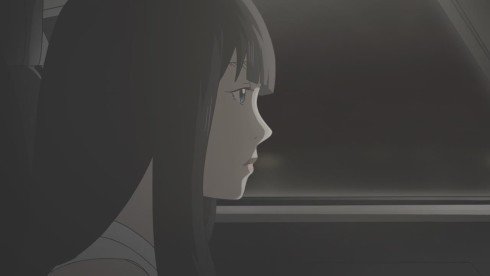 Of course, that was merely where the weird began, and spiraled out from. Picking up from last week, this week had Souhei, Moe and some of the college students and faculty go out on a camping trip to the Island where Dr.Magata’s stationed. You could feel the creepiness and dread slowly rise, as Souhei found out via the Lab’s Vice Director that it was more or less isolated, with no regular boat coming to the Island, nor any cellphone reception or modern communication.

The setup is prime for an abandoned Island Murder mystery, and I’m sure we’ll get to that, eventually. The real creepiness came from the show’s juxtaposition  if Moe and Magata’s stories, and how eerily similar the two girls were. In Magata’s case, her relationship with an older man, border on creepy as she was very much a minor at 13 years old, while he a prime adult. Its the same old man that we saw narrating in the premiere, so there’s definitely some continuity there. 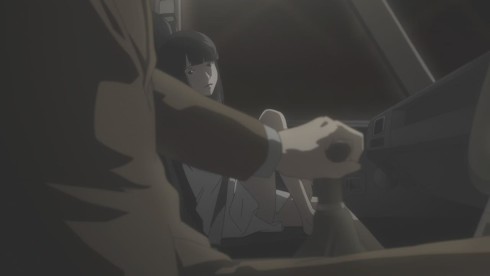 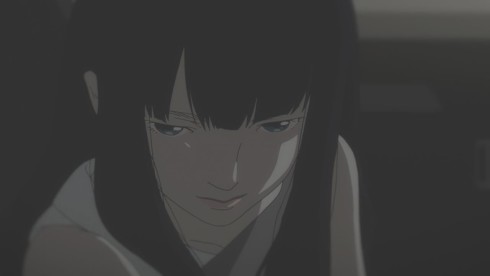 There isn’t, unfortunately, much context to what these scenes mean. Is the old man actually Moe’s father? Was HE having an affair with a 13 year old Magata? That’s really pushing some boundaries there, not that I think Subete ga F ni Naru is afraid to cross them. There’s the added wrinkle of Magata having a younger sister, and the Director of the lab having gone to get her. So, the whole thing could very well be happening in real time, for all we know.

And there honestly isn’t much we do know at the moment. Moe ends up tricking both Souhei and the lab vice director Yamane Yukihiro in an attempt to see Magata again. The plan kind of works, though they both  quickly become aware of it. That’s when the horror aspects of the show kick in. 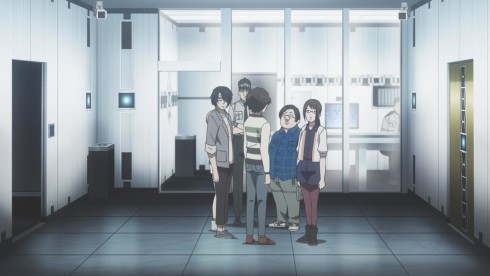 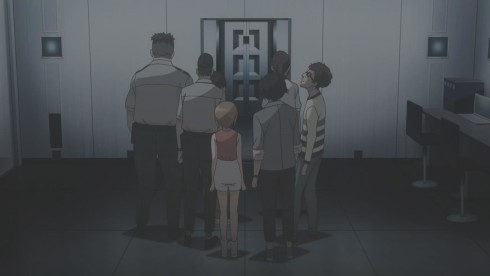 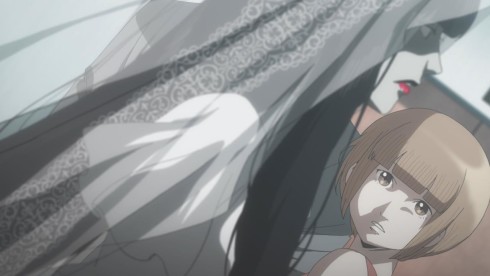 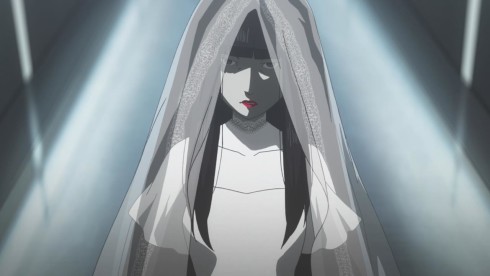 In a surprise moment, it turns out that Dr.Magata’s room is very much locked, and she, not answering. As Moe, Souhei and a few of the lab staff struggle on what to do about the door, it suddenly opens. The lights in the area flicker and the ominous vibe just kicks up to eleven. Its the classic horror scene as the area darkens, and a white, doll like figure emerges, Given how Pale the skin is, Magata is at first, mistaken for a doll. Its Moe that points out that it is indeed the genius that she met with earlier, being whisked away on a moving robotic trolley that we’re shown earlier in the episode.

The obvious cliffhanger moment follows, with Yukihiro putting a manual reset on the lab’s robotic systems, only to have the lights completely die down. There’s a black screen, before we cut back to the old man and a younger Magata, as he narrates about the power and terror of the girl that he’s clearly more than a little attached to. Its an unsettling note to end the episode on, but at this point, that’s more or less become the define trait of this week’s episode. 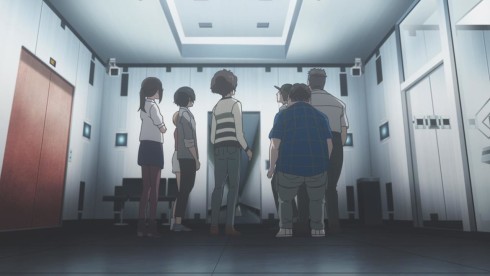 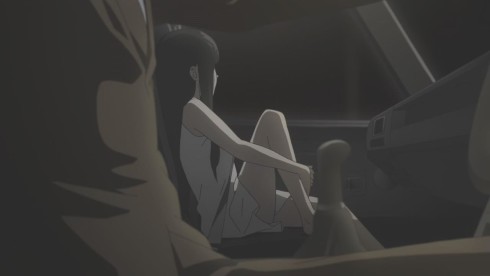 There’s an interesting contrast of disparate elements this week by the end of it all. Moe and Souhei actually have become pretty interesting and endearing characters, and are clearly a lot more likable now, but the show goes on to establish a tone that’s dripping with macabre and horror. And through it all, its still hard to really pin down what this series is, which I won’t lie, does have a slight element of frustration to it.

Overall though, I found myself actually a bit more engaged this week than I was last week. Some of the expectations I had going into the show based on the premiere were kind of side stepped, if not entirely obliterated. Subete ga F ni Naru continues to be an intriguing show, one that still stands out something entirely unique and ripe with potential. Potential for what though? That IS the question, isn’t it?