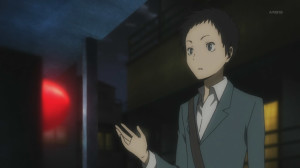 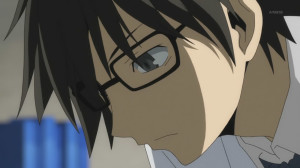 A bit of a weak episode compared to the rest. The entire episode is spent showing Celty and her conflicts with her head and being human. We learn where her head is too, and the answer was pretty obvious from the get go. The big reveal, was thus, not much of a big reveal XD

The only question that is perhaps left is if that head is a clone of the original head? Because we’ve already seen that her head was in a tank, but then we see it with the girl thats with Seiji. So all in all, we have a slight idea that there are two Celty’s, one with body and the other with the head.

The little part about everyone searching for something was nice and interesting. It also showed, by the end of the episode, who has what they want and who is still looking for it. I felt bad for Ryugamine, the guy is definitely searching for connections, or more or less, a love life. The way Anri just takes her shoes and shuts the door was a bit harsh, but I think she was into her senpai, who she’s still not over yet or something.

I’m finding myself less and less interested in Anri and Ryugamine’s stories, and more interested in Izaya, Celty and of course Shinra, who obviously already knows about Celty’s head and its location. This isn’t going to bode well for Shinra in the end, especially since Celty is hardly going to be pleased to know that he knew where her head was and purposefully kept her off track. 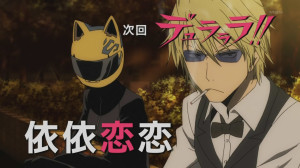 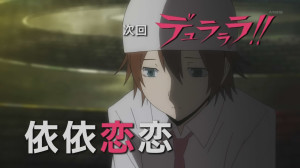 Next episode seems like it will continue the stories and plot threads that were started in this episode. There’s also going to be some of Izaya in there, and that should definitely make things go in an interesting direction!