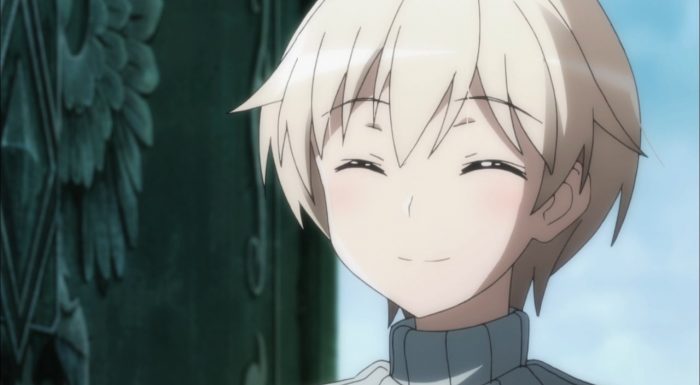 Brave Witches continues to impress me, both in the ways it does what I expect, and in the ways that it doesn’t. In some ways this episode fits in well within the formula already established by Strike Witches, and by other series where this type of character dynamic occurs, and yet in certain specifics it differs from the norm, enough to give Brave Witches an interesting feel of its own.

We start off with Hikari introducing herself to the 502nd, and from the start one can tell that most of the group is uncomfortable with Hikari’s presence. Aside from Kanno, who is openly antagonistic; Waltrud, who is an infamous womanizer and flirts with cute girls as a default setting; and Nipa, who is genuinely trying to be as nice to the new girl as she can; everyone else is plainly uncertain about her, and they’re all deliberately maintaining an emotional distance. And really they have no reason to open up to her. They know nothing about Hikari, other than the fact that she isn’t the person they were expecting, and she is by no means a suitable replacement. She traded ruthlessly on her sister’s name to get herself a place in their squadron, and that doesn’t really speak highly for her. Right now, Hikari is distinctly an outsider, and it seems most of the girls are going to keep her at arm’s length until she can prove that she has something of value to bring to the squad. 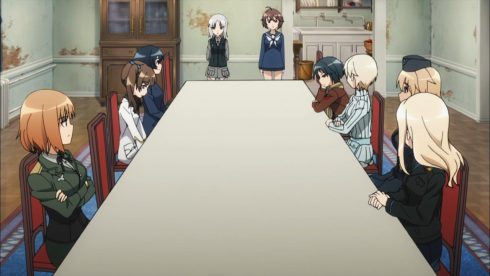 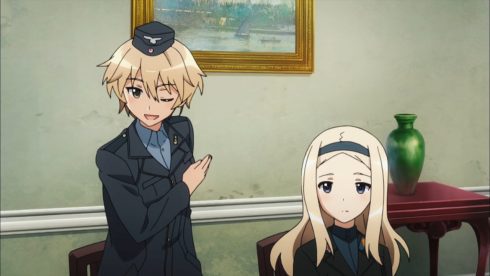 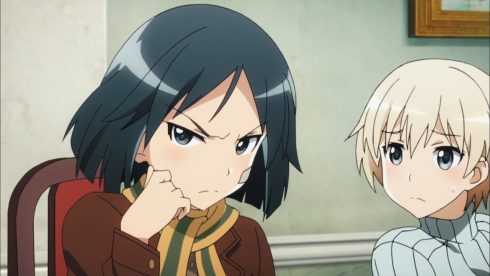 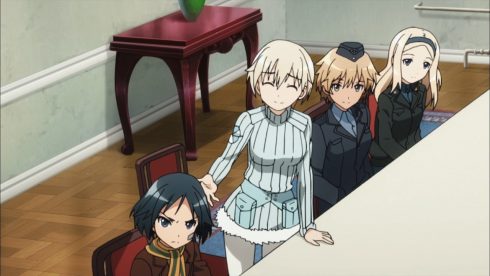 Hikari’s early morning runs definitely showcase her strong point. Nobody can match her for stamina. Kanno and Nipa discover this the hard way on their morning run, when Kanno decides to prove that she’s better than Hikari, and poor Nipa gets dragged along. Hikari basically runs both of them into the ground, and looks like she could easily keep going at the point when Kanno starts yelling at her in frustration. There are a lot of words thrown back and forth, but I think Kanno’s objection really boils down to the fact that Hikari isn’t Takami. Takami is Kanno’s friend, and Kanno was really looking forward to seeing her again, but now she’s in a coma and no one knows when or if she’ll come out of it. Being told “Well, you’ve lost your friend, but here’s someone else to take their place” can and has upset people who are a lot more emotionally stable than Kanno. The fact that Hikari is, frankly, incompetent as a witch just makes it all that much more of an insult in her eyes. 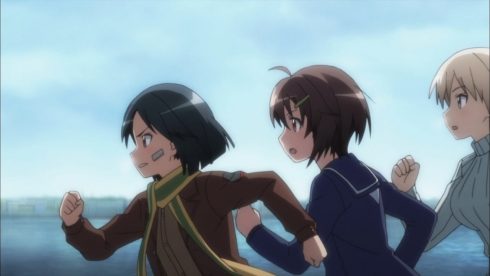 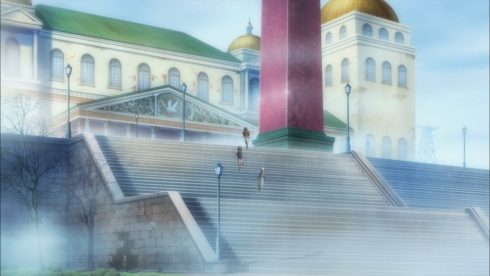 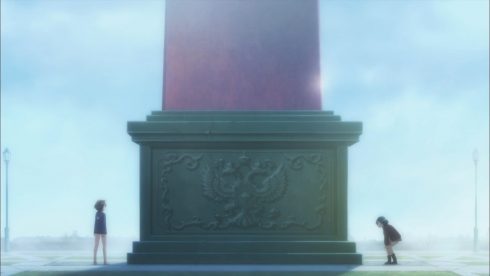 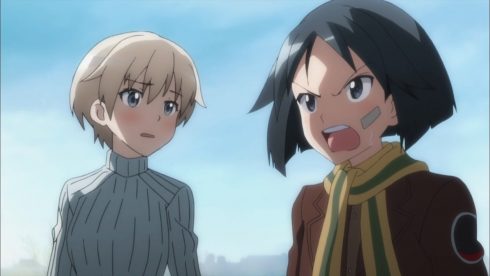 I have to say I like Nipa stepping in as Hikari’s one friend in the 502nd. Nipa is one of the few girls from the 502nd who has actually appeared in Strike Witches animated works before: she had short scenes in both the third episode of the Operation Victory Arrow OVA, and in the Strike Witches movie. She is a cosmically unlucky girl, often losing striker units and crashing due to freak, unpredictable circumstances, and I’ve been looking forward to see what sort of ridiculousness would happen now that she’s finally part of a real season. Having her step up and become Hikari’s first friend in the squadron may well mean she’ll get even more screen time. The more the better, as far as I’m concerned. 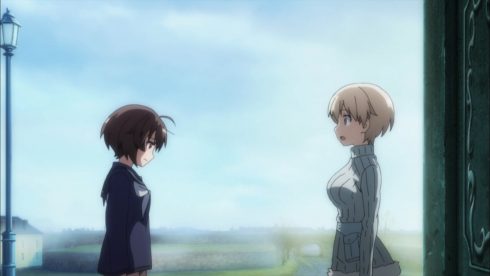 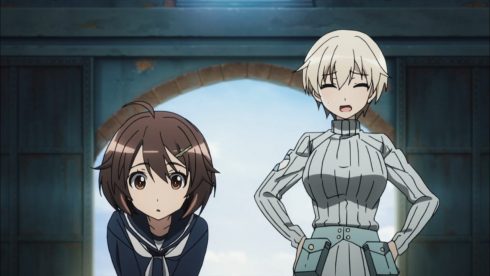 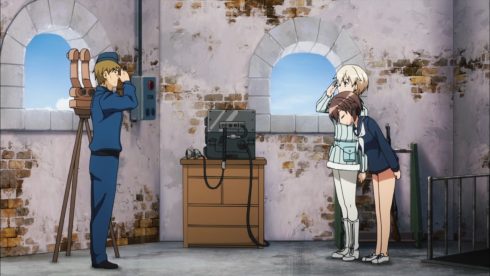 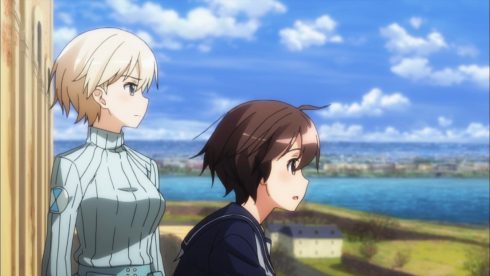 Hikari’s afternoon begins with them attempting to determine what she’s capable of. Unfortunately, the answer is “not all that much right now.” As a witch Hikari is cripplingly weak. She doesn’t have enough magical power to make a striker unit perform up to combat specifications, so her flight is unsteady. She can’t even get her personal magic, the magic eyes, to work at will. When it comes down to the question of what value she brings to the squad, the answer is not just zero, but really a negative, because in battle someone useful would be tied up looking after her rather than doing their job, so adding her to a combat group actually results in a net loss of strength. 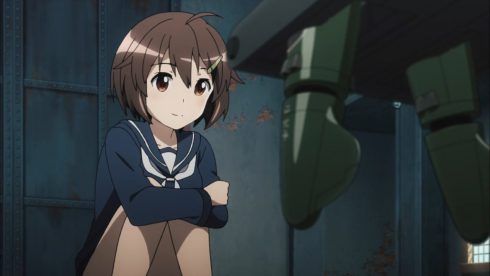 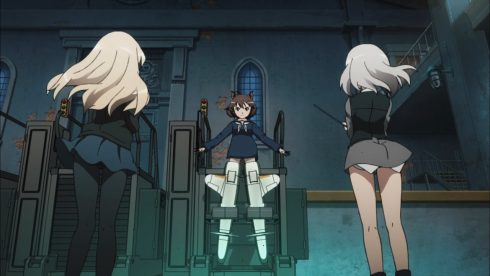 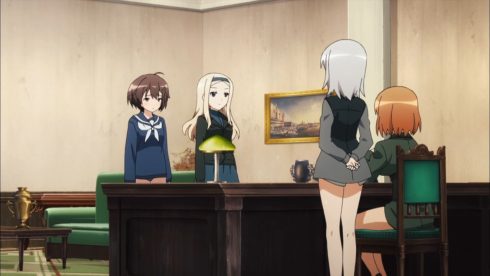 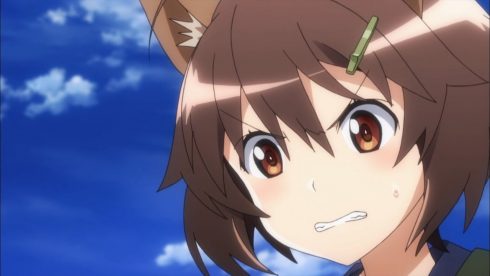 Throughout this whole process there’s the inescapable feeling that Hikari’s presence there is hanging by a thread. Arguably, Commander Rall actually gives Hikari more chances than she’d normally deserve, and I get the impression that Rall doesn’t really want to just label Hikari as useless and send her away. But that doesn’t mean she’s willing to let things drag out forever either, so when Hikari’s attempt to prove her magic eyes fails, Rall starts to order her home. However, fortune (or misfortune) strikes at that moment, as a report comes in that Nipa has crashed (again) out in the field due to locusts getting into her unit’s cooling system. Hikari immediately volunteers to go search for her, and Rall agrees, for the sake of letting her have at least one good memory of her time there before sending her home. 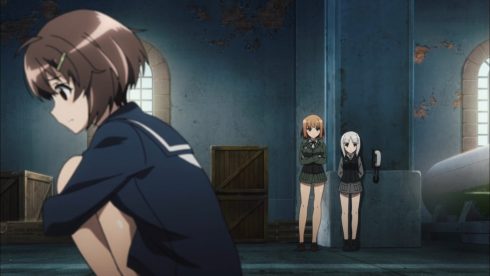 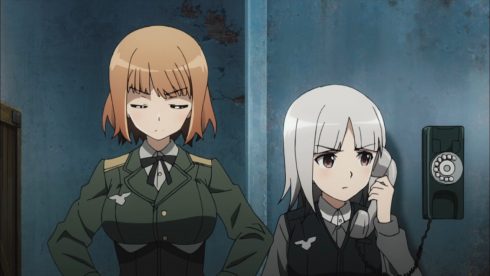 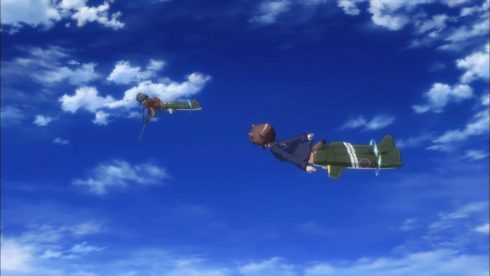 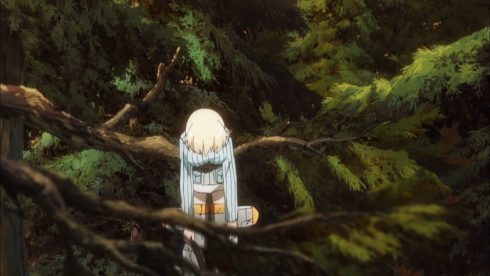 Putting aside Nipa’s crash (and the fact that she’s so used to it by now that she could just fall asleep draped in that incredibly awkward position over a tree branch), the Neuroi encounter on their way home is pretty much the key to this episode. Most of us could see something like this coming: after all, something has to happen to convince them to keep Hikari in the squadron. But what works best from a dramatic standpoint is that her assistance in this fight is entirely within the scope of the abilities she’s already demonstrated. She doesn’t defeat the Neuroi herself: that would be pretty ridiculous at this point. She doesn’t suddenly regain her magic eyes: since they weren’t working before, having them suddenly start working right now just as a way to keep her from being sent home would feel too convenient. No, all she does is support Nipa, whose striker unit is damaged and unable to fly, so that Nipa can distract the Neuroi’s fire away from Kanno, so that Kanno can finish it off. It’s teamwork, and it’s a solution to the battle that wouldn’t have worked without all three of them. 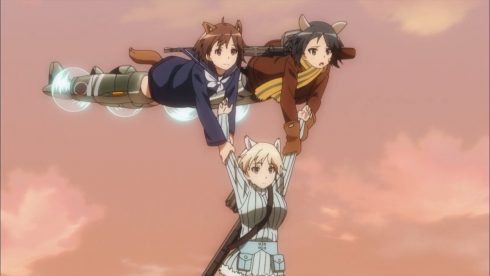 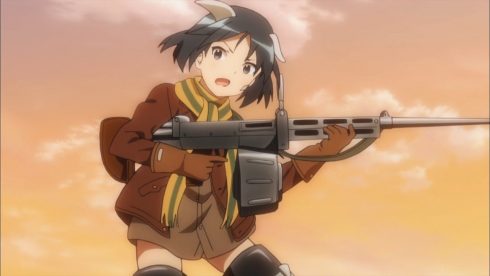 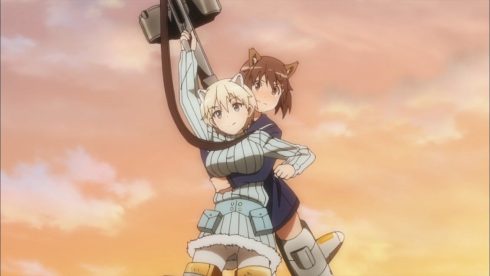 And so, despite the minor incident when the group is nearly back to base, Commander Rall and Flight Sergeant Rossmann decide that Hikari has proven to be useful. Rall tells Rossmann she can have Hikari for one week, and puts away the paperwork she’d been getting ready for Hikari’s transfer. We mostly saw the cold judgmental side of Edytha Rossmann this week, as she judged Hikari’s capabilities (or lack thereof), but she is recognized as an expert trainer. She is, in fact, responsible for much of Erica Hartmann’s (from Strike Witches) training, and given that Hartmann is now recognized as the world’s greatest ace that is saying something. If anyone is capable of training Hikari up to a functional level, it’s her. 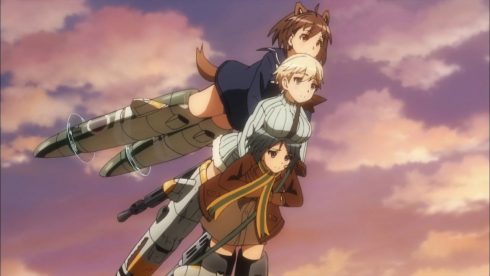 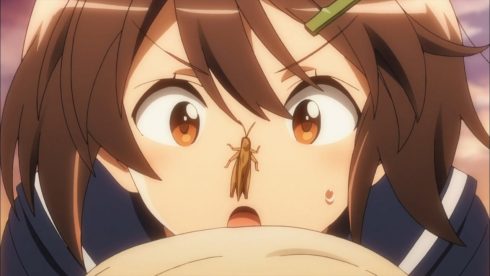 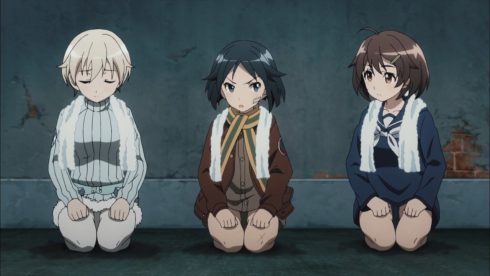 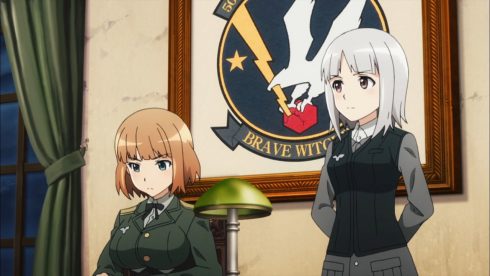 I am definitely enjoying Brave Witches thus far. The very fact that Hikari is a weak underdog instead of an untrained but potentially very powerful prodigy makes a lot of stuff in this series feel new. I’ve decided that I’m going to pick this series up for coverage officially, so hopefully I can look forward to seeing you all next week. EDIT: Or not next week. I am reminded that there has been an announcement that next week’s episode will be delayed. Now I’m sad. 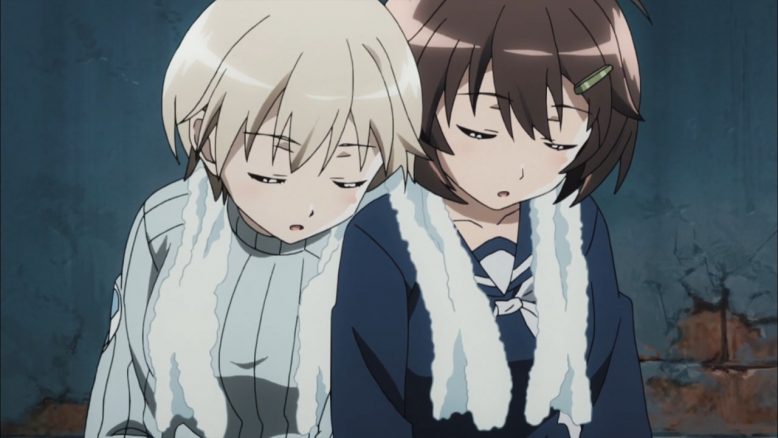 If you don’t think this is cute, then you probably have no soul.