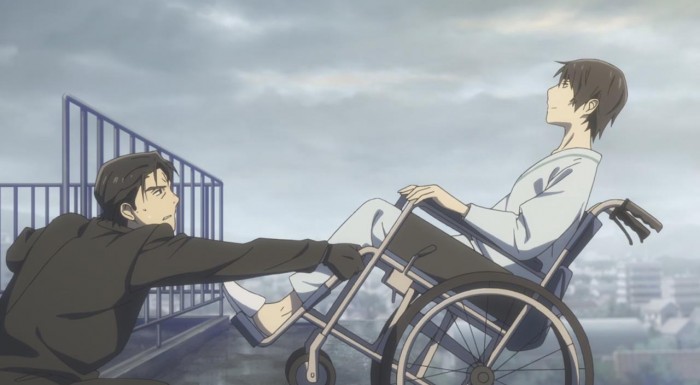 A fitting ending for the series that kept on giving. Boku Dake ga Inai Machi is officially done and over. The series that kept viewers guessing, confused, surprised and most of all completely engaged for 3 whole months has concluded, and it did so with an ending that I think was neither a bang, nor a whimper, but rather something that felt balanced, complete and satisfying. Endings are a tricky thing, in that there’s really no set rule or way for a generally effective one. Each story has its own tone, its own characters, its own mysteries and the end, well… it has to tie up all those loose ends, finish on a high note, and also leave the viewer with a lasting final impression before it bows out for good.

The thing that’s most fascinating to me about Boku Dake’s ending, is the rather straightforward and simple nature of it all. Much like how Yashiro’s eventual reveal as the killer was more of a matter of being, rather than some big revelation, so too does the ending itself kind of fall in line. There’s nothing overly surprising about how this series ends, there’s no painful or weird twist, and there’s really nothing all that astounding or outstanding. 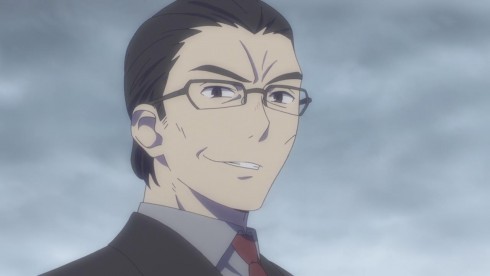 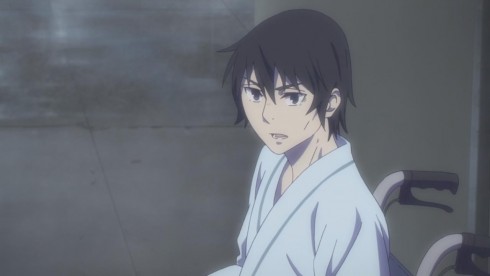 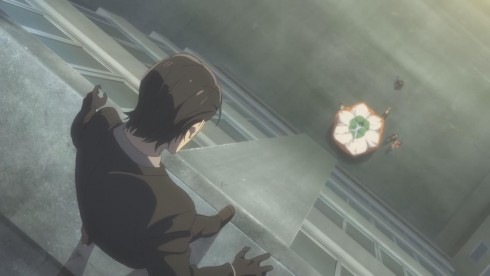 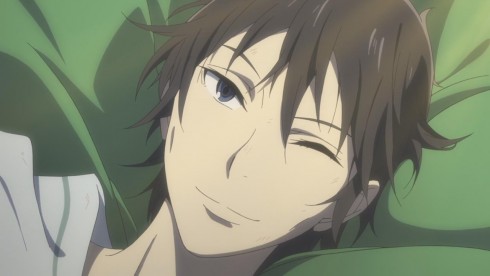 Satoru ends up enlisting the help of his friends and family, he ends up understanding and dominating Yashiro on an intellectual level and he manages to put away the killer, having saved the day and many futures at the cost of 15 years of his own life and childhood. The one surprise, if you can call it that, is again, this rather plain ending itself. Even that ending, however, is true to the core unpredictability of the series in a way. There was never was any indication that Boku Dake ga Inai Machi was going to end in the way that it did, after all, and that ending was about as “normal” as anime endings go.

Now, I keep saying simple and normal, and other words like that… So if you detect an undercurrent of negativity in all that, its because that it very much does exist in my opinion of this finale. Boku Dake ga Inai Machi’s ending is nice, its a neat little package, but there’s no sense of wonder, of bewilderment. The series doesn’t quite transcend past the whole “its a thriller” idea, which is a bit of a letdown. 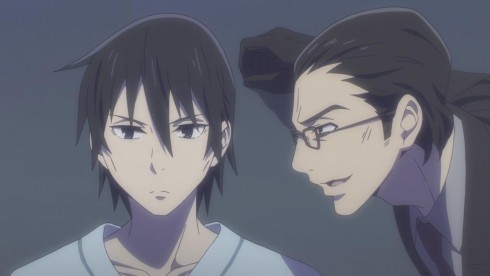 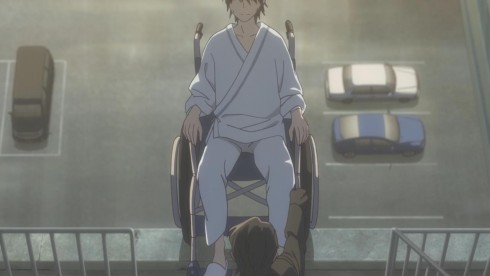 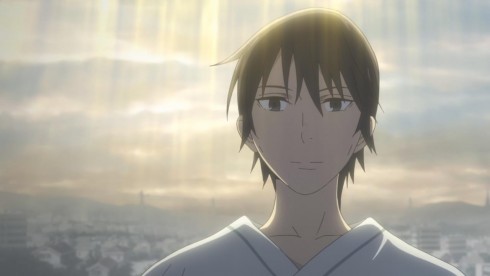 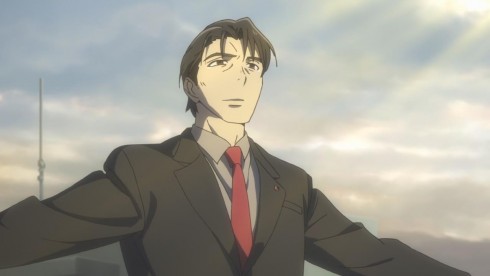 Is a “good” ending simply good enough for a series like this? For the life of me, I just can’t decide. Boku Dake’s ending does all the things that I want it to do. It ends with Satoru finally pulling one over Yashiro. and it even almost humanizes the villain himself. The final moment between Satoru and Yashiro is beautiful, if only because both of them really do realize how connected and complex their relationship is. There’s a feeling of mutual respect, of parent/child love there, and its buried inbetween an obvious antagonism that simply results from one being good and the other being evil.

Then there’s the aftermath from the crisis. Satoru ends up gaining the perspective and the wisdom to be able to become a successful mangaka, he’s able to move forward and he’s able to appreciate all that he’s accomplished and all that his friends have been able to do because of him. There’s a very powerful and telling moment at the very start of the episode, where Satoru actually ends up remembering everything after touching Kayo’s child. 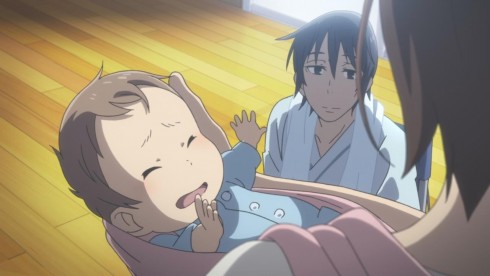 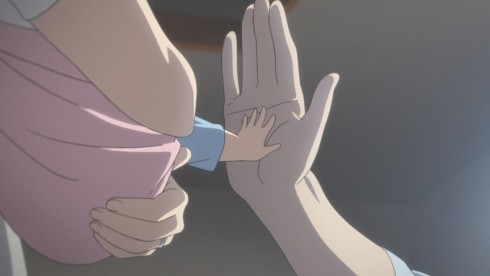 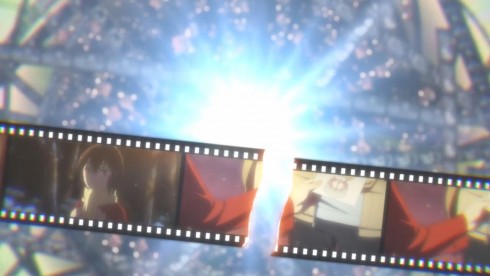 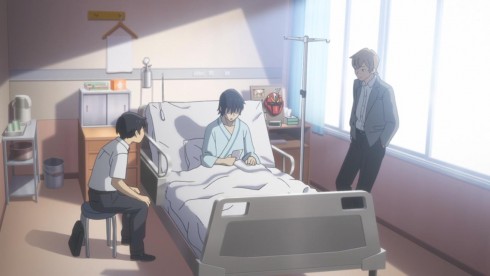 The Child, is a life that Satoru indirectly helps create, because its born in a future where both Kayo and Hiromi are alive. Its so fitting then, that Satoru’s big moment and return to form, comes from an encounter with this child. Its also great to see Satoru work together with his friends and family to finally defeat Yashiro (leaving aside how darn stupid and simplistic the plan itself really is).

And after all of that, there’s the moment where Satoru finally meets Airi again, just as the series ends. This is the series giving us one final nod towards a happy future for the story and its protagonist. And that all is fine and good, and fairly powerful. I mean, this ending didn’t lack emotional resonance, it felt happy, hell… I even shed a small tear as Satoru and Airi finally reunited/met again for the first time. I smiled as the Pizza place manager was now relegated to a part time worker in the new future/present, signalling that everyone got exactly what they deserved. 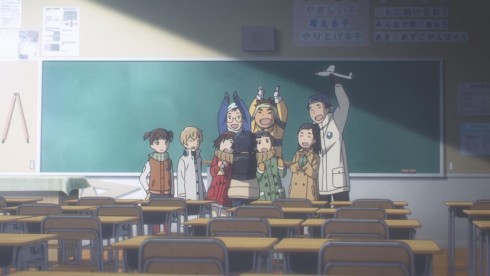 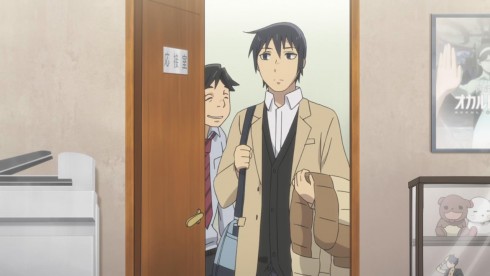 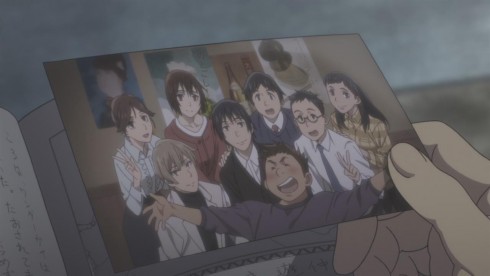 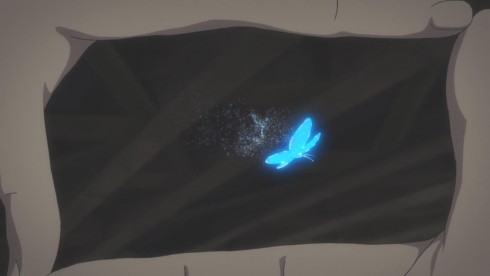 There was even this strange little moment of the blue glowing butterfly leading Satoru back to Airi. It was all so nice… And yet, I dunno, I just felt like there needed to be more. There was a sense of something missing. I’m not even sure what that is exactly, or what I was expecting, but I did feel a sense of: “Oh… Okay, that was it?”.

Looking at the series as a whole for a second, there’s not a lot to it at the end of the day is there? I mean, Satoru goes back in time a few times, tries a few things to stop and find the killer that’s related to his past, eventually succeeds by improving as a person himself, and then catches the killer and all is right with the world. Yes, its very engaging in the moment, expertly so, but this really is a story that’s all about being in the moment, and the actual journey itself is simply a small lap around whatever limited space there was to begin with. 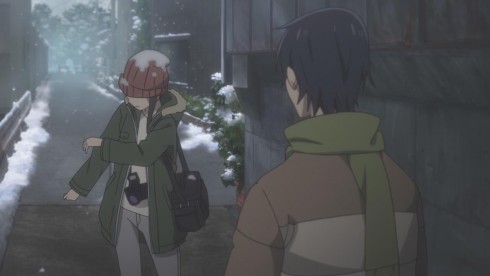 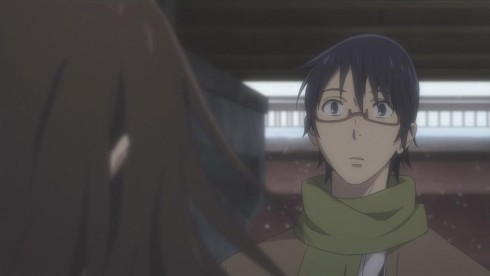 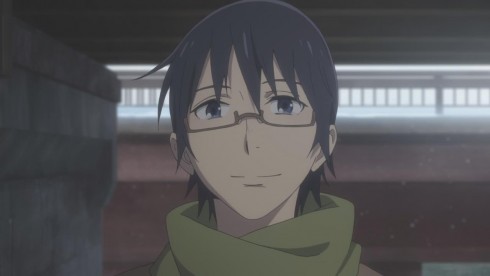 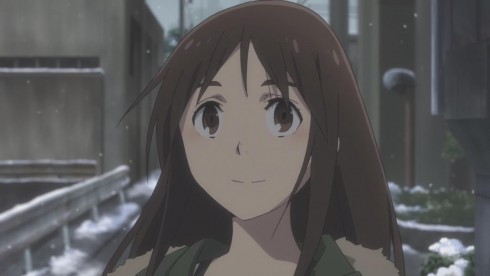 Again, I’m not really saying that’s right or wrong, just that it feels weird. The whole idea of the revival itself  is never really touched on, We don’t really understand what Saotru’s whole thing with the grim reaper was, even Yashiro himself feels kind of underdeveloped in the whole thing until the very end. There’s Kenya as well, who’s waay too perceptive for no real reason. There’s Yuuki and how exactly Yashiro ends up framing him, and then there’s even the little bit about Airi and her past that is glossed over.

Does Airi actually get a happier childhood because of Satoru’s actions somehow? Or is Airi just Airi? And do she and Satoru end up reconnecting and end up together? The suggestion is there, but I would’ve loved one more scene, one more moment that would’ve really answered some of those questions. 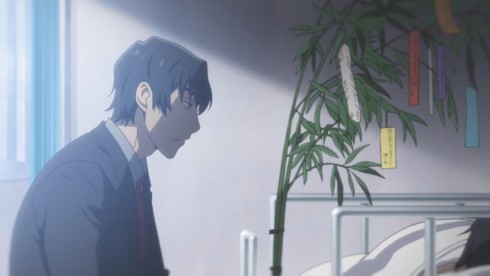 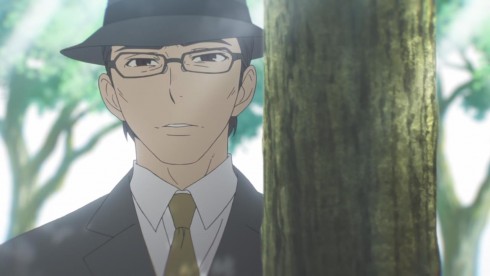 And even if you forget trivial questions like that, what exactly is the point of this story? Is it about Satoru’s growth and change as he embraces his younger self? Is it about a good old fashioned battle between good and evil? Is it about heroes and true Sacrifice? Or is it the corny “My lost 15 years of people dedicating themselves to me are my treasure” thing?

I don’t know. I don’t know which of those things is important, or the central element of the story, and that I guess, kind of bothers me. Its what I think holds the ending back a bit, and prevents it from reaching the same high point as the first episode of the series. 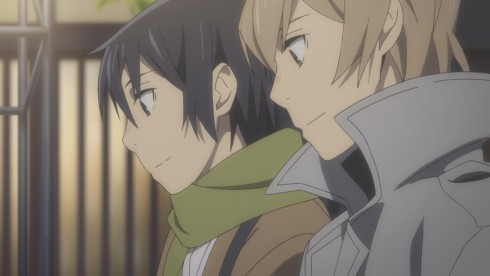 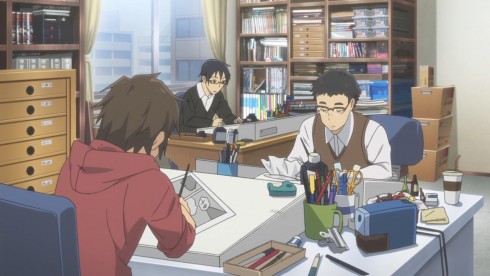 Boku Dake ga Inai Machi has a good ending, a fitting ending, but its one of the few times where this story just doesn’t outdo itself. And in the end, that’s fine, and like I said before, the series itself has more than proven itself to be exceptionally good, a series that will be revered and remembered for ages as one of the very best. But I also think that with all of that, the series will be remembered for how gripping it was on an episode to episode basis, and less so for how it ended or where it led to.

And I suppose that’s fine, I mean, I’m not exactly angry, or annoyed, and am actually quite happy with the ending in a way. I guess I just wanted to be blown away one final time, and given the pedigree of this series, the depth of its characters, the unpredictability from plot point to plot point, the series kind of gave me that expectation, however unfair and harsh I’m being. 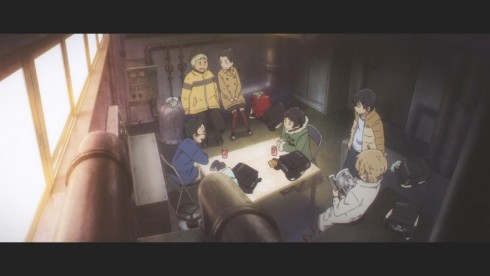 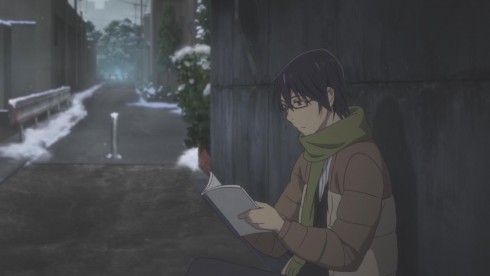 As a final episode though, I think Boku Dake ga Inai Machi does very well for itself. The fact that this series never went any lower than “really good” and often times hit “exceptional” is just something that you don’t see these days, or in general I suppose.

If nothing else, I’d at least say that Boku Dake ga Inai Machi is definitely one of the best series of 2016 alongside being one the first. I also have to give props to A-1 Pictures for a stellar adaption, one that probably wasn’t easy to pull off with the 1-cour runtime. And of course, all credit goes to mangaka Kei Sanabe, who wrote, illustrated and created this epic world and its characters. Sanabe is definitely going to be a guy to keep an eye on. 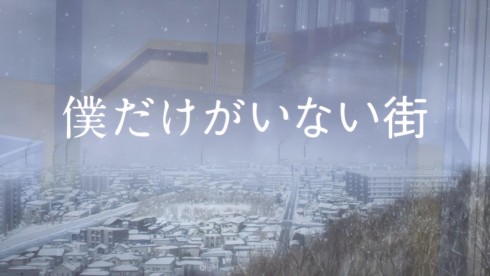 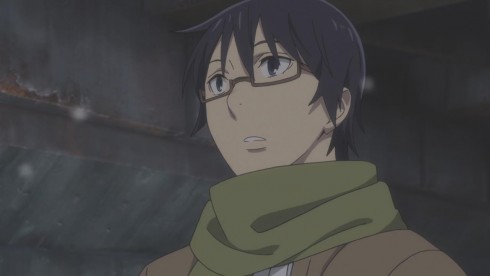 In the end, I think Boku Dake ga Inai Machi’s biggest achievement is being able to become so extraordinary, and to mystify and enthrall audiences into a story that for all intents and purposes is pretty simple, but just manages to transcend itself through masterful storytelling, great pacing, and stellar character work. Heh… I wonder if 2016 peaked in its first season, because I don’t see any series being able to top this one for the rest of the year.