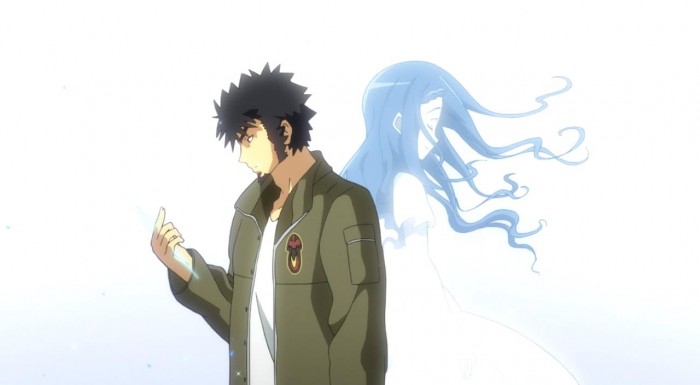 Now we’re getting somewhere. After last week’s somewhat overwhelming episode, this week we had things finally start to make some sense, and display the sheer brilliance tucked behind the surface of the show and franchise known as Dimension W.

I know this is kind of old news, but it was this week’s episode that really made me realize how darn much I love this series and franchise as a whole. The twists that we got this week, the callbacks to the past, the connections between characters, it all just worked so darn well. As we’re nearing the end of the first and final cour for a lot of series, there’s an overwhelming sense of regression to the entire season as a whole. A lot of series are starting to ramp down, maybe because we’re nearing the premature end of their series, or maybe because there just wasn’t enough planning for the end. 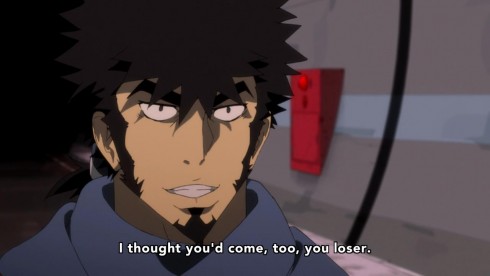 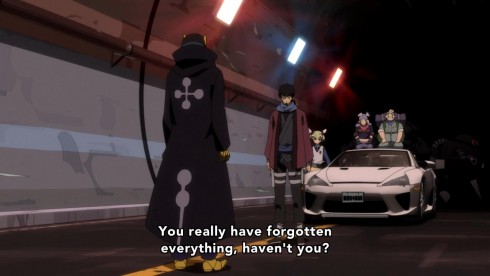 There are a few series, however, that just continue to stay consistently good this season, and Dimension W is one of those few series. I confess that I tend to enjoy series a lot more when they just surprise me, and show me things that are outside of my ability to guess and my ability to imagine. Stories that go to places I can’t dream of are stories that give me the most entertainment these days, and its because of that this week’s episode Dimension W is so darn great for me.

There’s Loser, who finally begins to make sense in terms of his affiliations and needs. Loser is the very definition of an anti-hero, one who lost someone in a tragedy, and his entire existence has been molded by that tragedy. He’s like Kyouma, but while Kyouma, despite how grouchy and angry he is, is overwhelmingly pure in his pain and his path in life, Loser is the exact flip side, the darkest version of what can happen when someone experiences tragedy and tries to rebel against it. 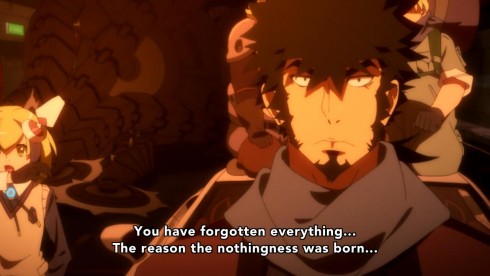 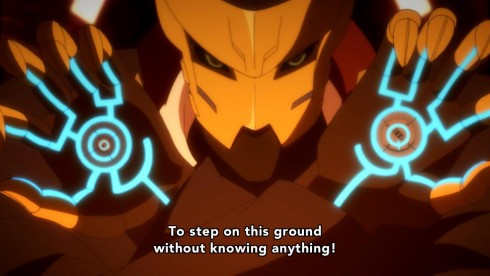 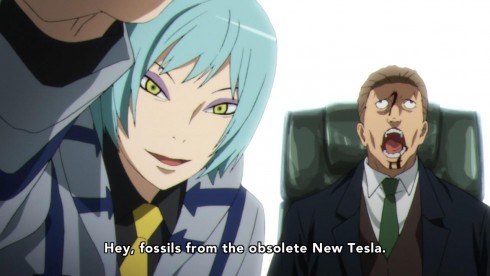 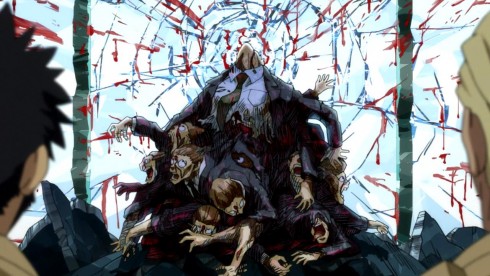 The fact that Kyouma and Loser actually know each other from the past, and are tied much more intimately with each other than previously thought, is unexpected to say the least. But the surprises don’t end there, because Kyouma, Loser and even Salva are all unknowingly tied to one another, their own tragedies and to a man named Haruka Seameyer.

Haruka Seameyer is the most fascinating thing to emerge from Dimension W yet. If there’s a series villain or antagonist, then Seameyer is definitely it. Yet, Seameyer isn’t a character who has any major presence in the present, beyond just being a blue sphere of energy. No whatever twisted or sick plan Seameyer enacted, happened in the past, and ruined the lives of Kyouma, Loser and Salva. 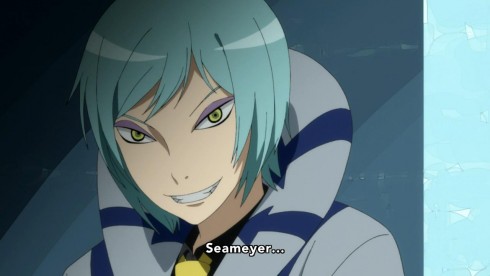 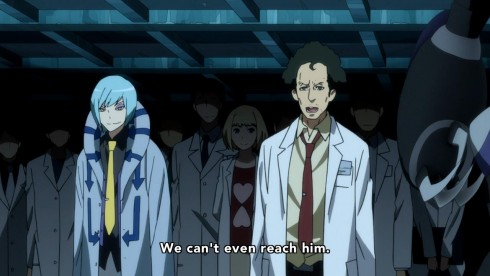 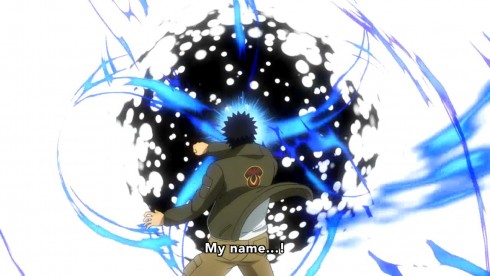 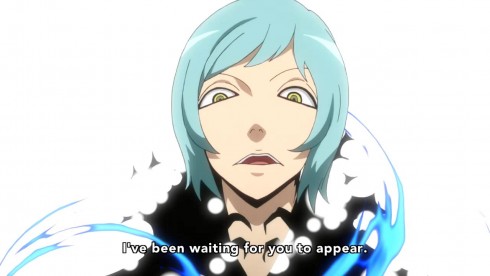 Seameyer turns out to be an evil, almost Joker(Batman)/Kefka(Final Fantasy VI)-like character, but he’s also the student of known other than Yurizaki Hakaze (Dr.Yurizaki). We all know Yurizaki’s the guy who created Mira, and kicked off the series, so the connections just continue to build, one after the other. There’s an intricacy to how everything connects so completely, so fluidly. Much like Dimension W’s world building, the plot itself is masterfully constructed, with a ton of care.

And its through Seameyer-Sphere capturing Kyouma, that we get some serious insights into the pasts of both Kyouma and Salva. Boy am I glad the revelations from the past aren’t done yet, because I found the minor dive into Kyouma and Miyabi’s story horribly lacking. I mentioned that in the post for that episode, but there’s just so much depth and story buried in the past, that it would’ve been a missed opportunity to just gloss over it. Thankfully, Dimension W intends to go back to the well of the past, multiple times, whenever it needs to. 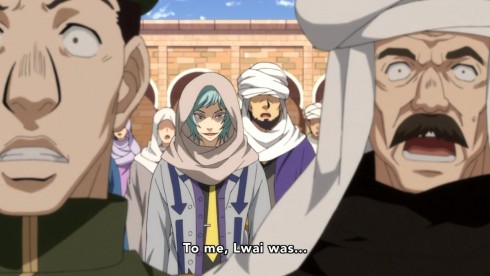 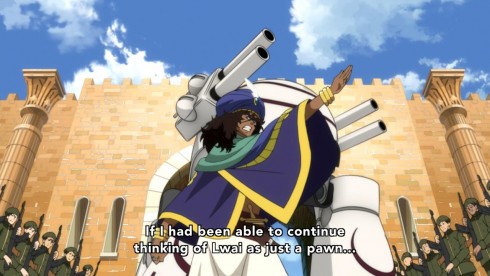 Its not an approach that’s immediately apparent but I’m at least glad that the show intends to show more of the past, and continue to flesh out whatever big finish its building towards. To that end, we learn in the past, that its Seameyer that causes a war in Salva and Loo’s country, and ultimately causes Salva to almost kill his younger brother, while dealing with the insurgents.

I’ve said it before, but the series just continues to make a solid win with Salva and Loo’s story. We’re already in original territory with the fact that an adopted Prince isn’t openly antagonistic to his younger brother, but this week we saw that Loo is actually the core of Salva’s heart. Salva doesn’t care for much in life, he’s cold and ambitious, but its not until he loses his younger brother, that he realizes he has a heart. 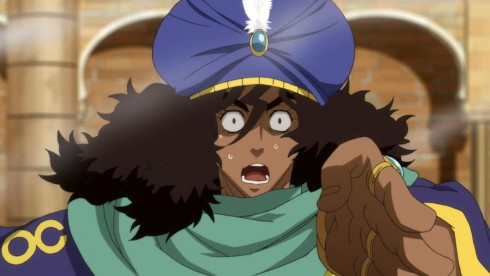 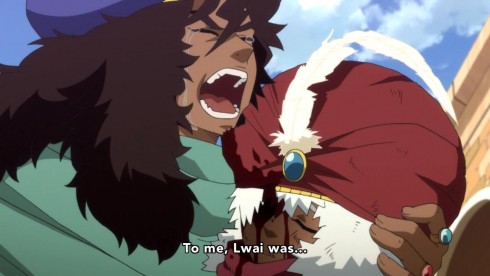 Its just such a powerful thing, to see brotherly love, one that transcends even blood relations, and have it act as the defining moment for Salva and Loo. It makes their story not only original and touching, but it just continues to make Salva a very likable character, one that’s definitely transcending the horrible first impression he made.

But there are actually four major things we learn from Kyouma’s little dip into the past, and Salva and Kyouma’s own histories are only two of those things. The third thing, actually turns out to be Loser’s identity, which is that of a researcher at the Facility of Adrastea (Ground Zero on Easter Island). Loser was a straight arrow of a scientist, one that ends up being taken hostage along with his wife by Seameyer, and ends up being made to do some terrible for the villain of this story. 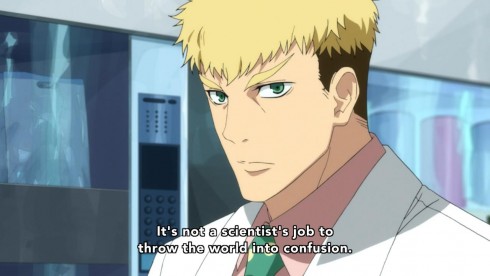 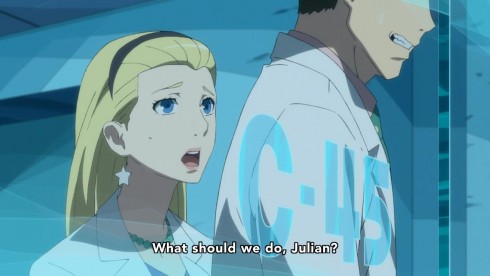 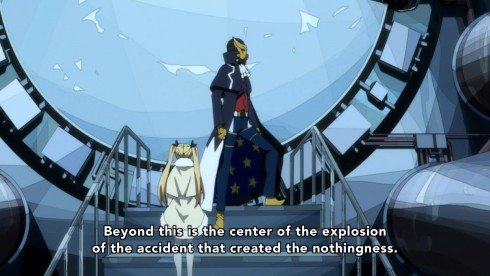 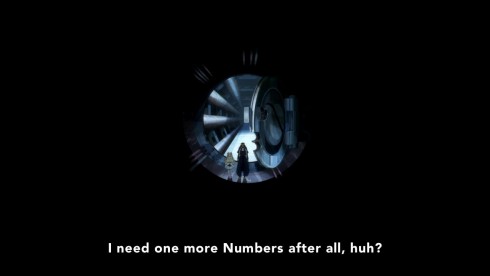 Its clear that Loser’s tragic loss of his wife, and Kyouma’s whole visit to Easter Island are tied together somehow, but we don’t have quite the full picture yet. Whatever did happen though, I’m confident we’ll learn about it sooner rather than later, if only because Loser himself makes it to the gate of Adrastea, only to find a wide abyss of blackness and nothingness there.

But before we get back to the present, there is one final thing we learn from Kyouma’s little trip, and that’s about the W dimension itself. Every little piece we learn about the W Dimension in this show, just continues to impress, and continues to carve out a place for this franchise as one of the best sci-fi pieces of entertainment there is. 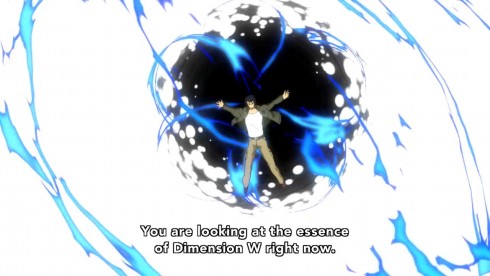 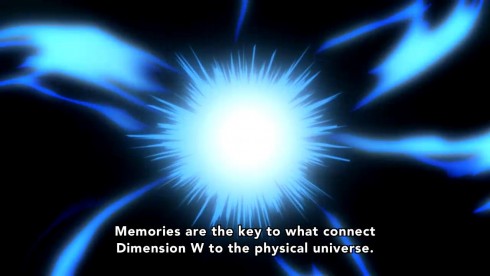 This week we expand on the concept of the W Dimension, and learn that the link between the W Dimension’s many possibilities and their actual manifestation, is the concept of memory itself. Again, it just all makes sense. Memory is another part of our brain’s data that we don’t quite understand, so to attribute it to time, space and energy in the clever way that Dimension W already has for everything else, is just pure genius.

Not only that, but it puts the power of shaping reality on the past, and on an individual’s memories. Kyouma ends up hearing Miyabi in the divide between the past and the W Dimension, and its there that she tells him to have faith in his memories and the choices he made in the past. There’s an almost feeling of fairness to the whole concept there, and it doesn’t seem like there’s some simple kind of reality altering device present to change the present. All of this stuff is just, intricately complex and really well thought out. Its not the kind of stuff I could ever, ever think of, and yet the concept is presented in a way that makes it pretty believable, and even possible. That’s solid sci-fi right there, the kind of stuff that feels plausible and possible, and yet is obviously fantastical. 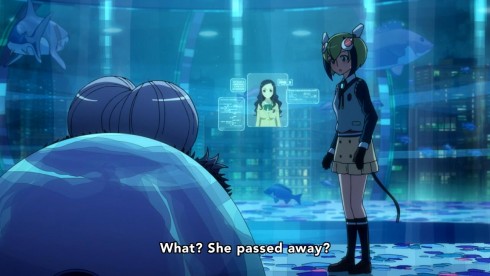 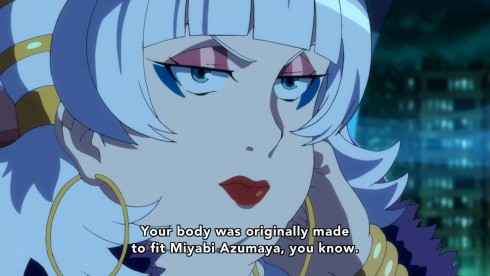 If all that weren’t enough, there’s one more revelation we got from the episode itself, and it happens in the present. While Kyouma is able to escape Seameyer’s clutches, mostly thanks to his memories of Miyabi, there’s the final call back to Miyabi and her relation with series heroine Mira.

Now, once again, the show just completely floored me with how it went about this particular reveal. The easier path, the obvious one, would’ve been to have had Mira have been some kind of reincarnation, or a memoryless Miyabi, somehow created by Yurizaki and his wife. Instead, it turns out that Mira is actually the body that was created to save Miyabi! 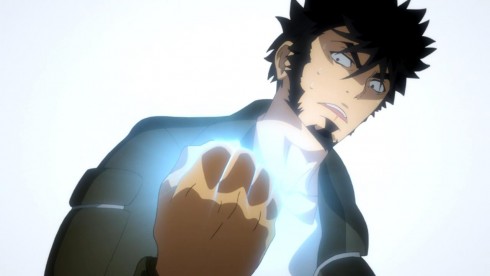 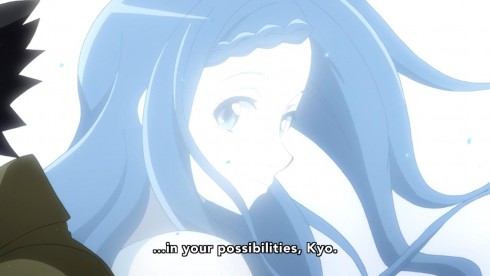 Man, if that doesn’t put Kyouma’s distaste for Mira into context, I’m not sure what does. Its almost admirable that Kyouma can stand to be in the same room as Mira, as she literally is a reminder of everything that could’ve been, both for Kyouma and for Miyabi. Considering this new version of news, its pretty darn admirable to see Kyouma deal with Mira as well as he does, because I’m not sure any other person would be able to take that kind of mental and emotional stress.

This new bit of information, also changes up the dynamic between Kyouma and Mira, making it infinitely more complex. Its clear that Mira is made to look like Miyabi, and even shares all her body measurements, right down to the shoe size, but she’s also a younger girl, almost a child. She’s tied to Kyouma, for better or worse, and it seems like as they both learn more and more about each other, their dynamic continues to get more and more chaotic. What are these two to one another? Its a puzzle that I look forward to the franchise answering eventually, because I’m not even sure the anime will get to that part in whatever run time it has left. 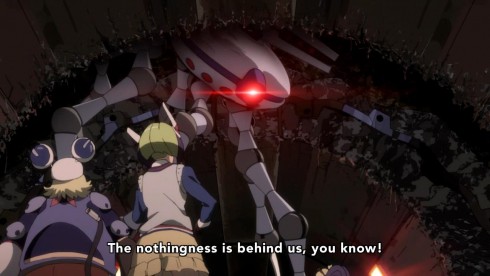 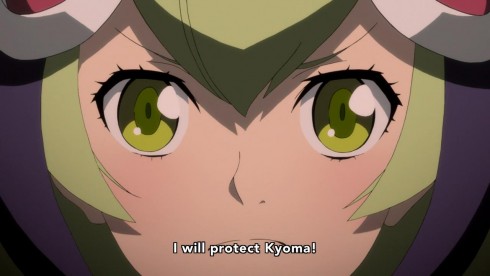 For the moment, it seems like Kyouma is still out of commission and Mira is going to have to protect him. Where the story goes from here? What kind of conclusion do we get before this series bows out? I’m not sure. I just know that if the series can keep pulling off story moments and surprises like it did this week, then well, I just can’t wait for more.I can’t wait for next week, and I can’t help but begin praying for a continuation of this series past its inital 12 episode run. Its just one of those series that’s just too good, too amazing to just end in one season.

And while I often forget to mention the production because the story and characters are so powerful, its worth noting that the production for this show continues to be excellent. Jaw dropping art direction, amazing animation, great voice acting, all the quality of a bonafide classic are present in Dimension W. 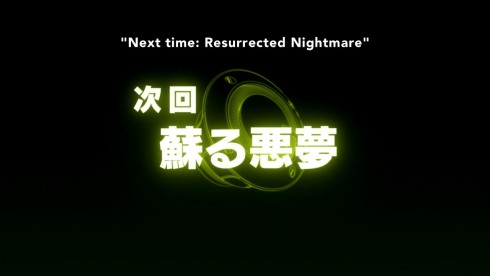 Resurrected Nightmare eh? Seems like we’re not done with the past quite yet.