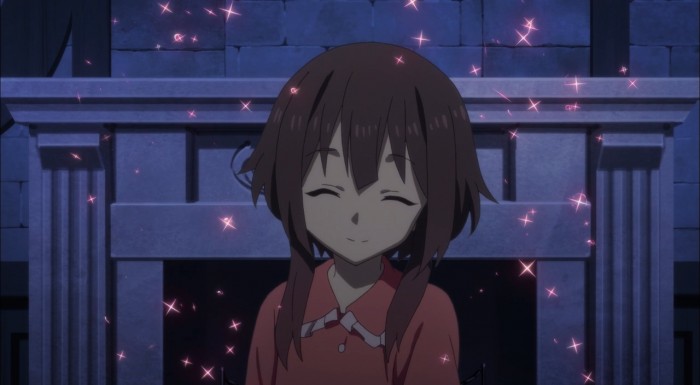 This show just never lets you down. Again just a completely hilarious episode from start to finish. Though can’t help but say that Megumin remains one of the best characters in this whole show. Glad to see her get a fair amount of focus in the second half. Just a very fun episode seeing the cast go to a haunted mansion in order to get a place to stay. Things were looking pretty bad in terms of surviving the winter and for their money. Aqua had to sell her winter coat just to keep her head above water. They were at the point of Aqua trying to burn Kazuma’s tracksuit in order to fuel the fires for another day. The winter is not an enemy to take lightly, no doubt about it. Not one they can blast away, but one they have to either endure or escape from. 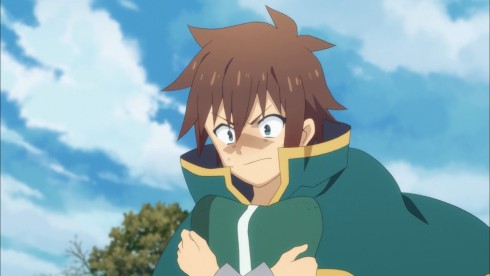 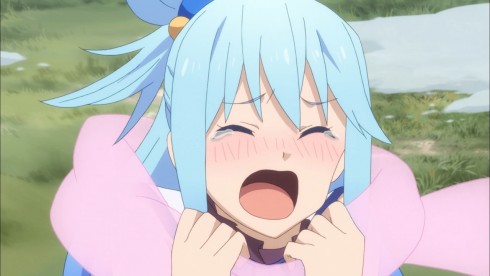 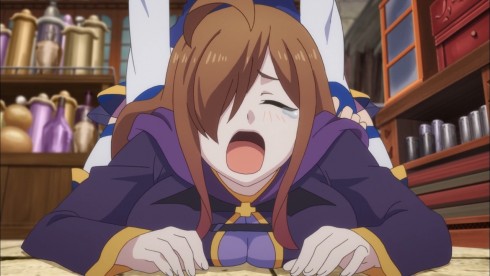 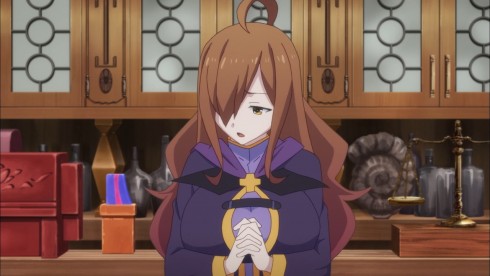 We did get to meet a new character with Wiz, the lich. Who just so happens to be another one of the Demon King’s generals XD. Although to be fair she’s not a combat person, but rather one who is behind the barrier that makes it impossible for adventurers to march up to the guy and fight him. A very standard RPG setup. You have to take down all the sub-bosses before you can fight the final boss.

It was something else to see the total aggressive tactics of Aqua throughout the meeting with Wiz. She really doesn’t care for this person XD. Now maybe it is because her pride puts an undead extremely low on the totem pole. She’s an arch priest and a goddess. A powerful undead is probably not on her list of favorite people. Toss into that their difference in station. Aqua is struggling to avoid freezing to death in a barn while Wiz is casually running a shop and probably not at risk of freezing to death….Understandably Aqua isn’t happy about all of this. 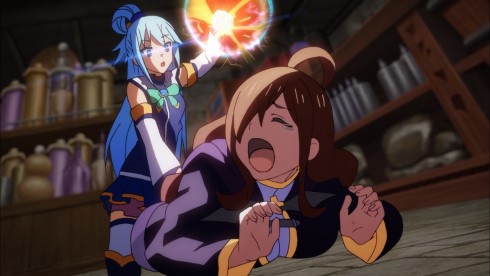 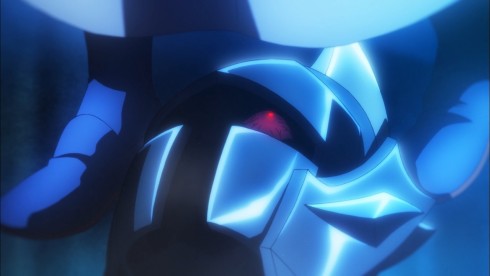 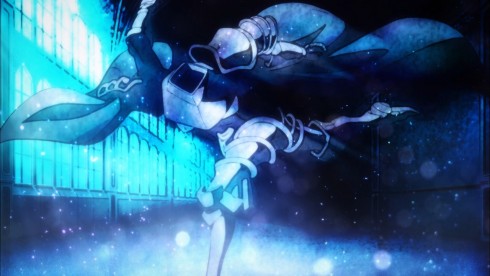 Hilariously enough Verdia…actually was closer to what Darkness imagined he was than I would have thought. The kind of pervert who would roll his head down a hall to look up Wiz’s skirt…Somehow I’m feeling less sorry for how he ended up going down XD. Sometimes divine justice does come to pass I suppose.

Funny that is tough to tell who is the goddess and lich when watching Wiz and Aqua interact. Wiz being a pretty sweet person overall. More than happy to work simply as a shop owner in a human town and even willing to teach Kazuma a new skill. Heck she was making sure any wayward spirits were able to pass in peace. Something Aqua was too lazy to do XD. They took that job from Wiz and in the end Aqua just took the lazy route of putting a barrier over the graveyard and leaving the spirits to go haunt another location. 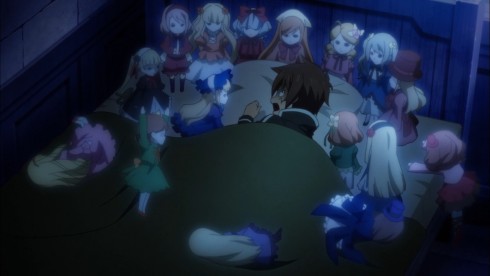 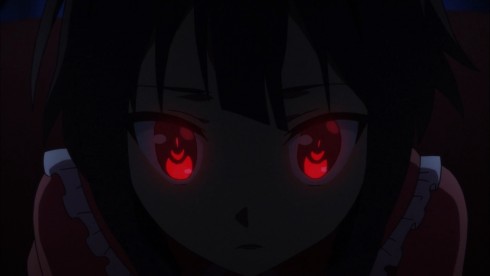 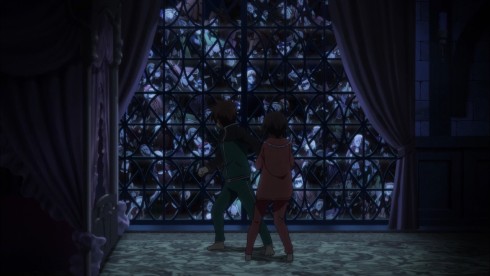 The second half was mostly dominated by Megumin being the cutest character in the cast. Her antics and banter with Kazuma was a lot of fun to watch this time around. Both of them having raced to Aqua’s room hoping she could defend them and safely escort them to the bathroom. Great little moment when Megumin’s crimson eyes additionally scared the heck out of Kazuma. Though the best bit might have been how Megumin refused to let Kazuma go to the bathroom by himself and leave her in that state XD. Using beautiful talk about friendship and comrades when really she just didn’t want to be the only one still wanting to go. Even prepared to grab onto Kazuma and make it impossible to take a pee in peace.

Did enjoy as both of them used the whole “you can use a bottle to go to the bathroom.” Neither of them being particularly amused by that. Both of them battling earlier with shaky legs as they tried to keep it together. It was just a lot of fun with these two going around with the ghost doll army chasing them down. Even having to drag Megumin out of the bathroom (without her pants/underwear) just so they could stay ahead of the tide. In the end…Aqua seems to have saved the day while they were busy with their own difficulties. Love that when Kazuma did seem at his limit and ready to use the bottle…Megumin was readying her explosion magic XD. 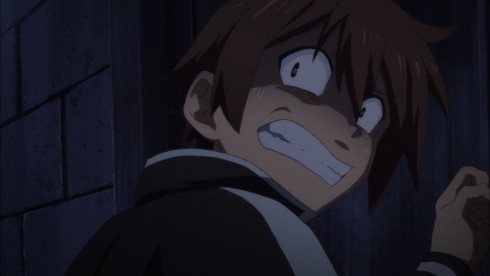 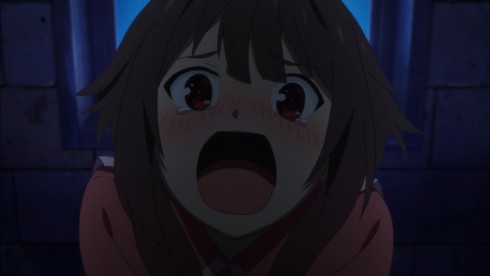 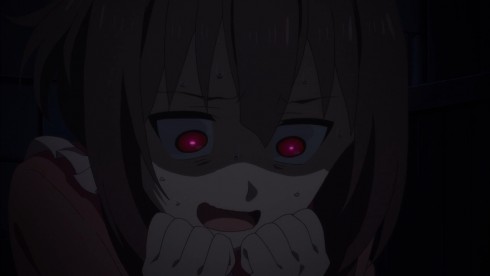 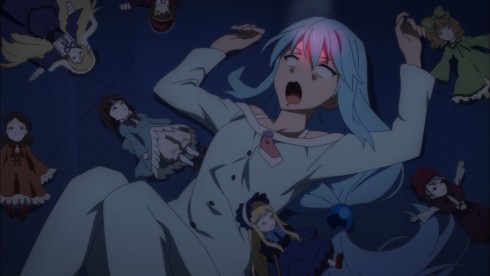 It was just a lot of fun really and the fact that it was a situation they made was all the more hilarious. Not that it didn’t work out for the best. They got a new place to stay that isn’t a barn. The whole group can just live together for the time being and not have to worry about freezing to death. They have other troubles sure, but one major problem is now put aside for the time being. Seems like for the lack of Darkness this week, we’ll get plenty of her next time. Can’t wait to see what this show will do next episode.