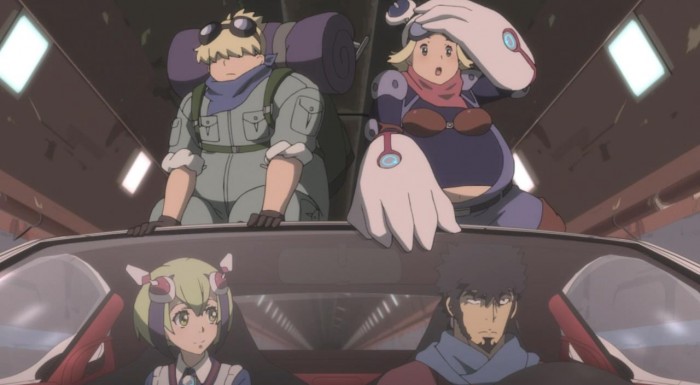 Episodes like this one are really really hard to talk about, if only because its unclear as to where and what everything is leading towards. That’s the very nature of the beast, however, when it comes to being smack dab in the middle of a story arc. The forward moving momentum is strong however, and at the very least that sense of “rush” that’s been largely felt in the last few weeks, definitely subsided quite a bit this week.

I really do have to hand it to Studio 3Hz. They haven’t been dealt the best of cards, but they’re definitely making the most of what they have. Dimension W is an ongoing manga, and one that demands a lot of animation and technical prowess to adapt. Its also got only one cour of run-time, and it needs to make a serious case for this story, these characters and this world. Its a challenge that many anime series these days have to face. How to tell enough of a satisfying story, end it at a decent point and leave fans hungering for more so that a potential continuation can happen. 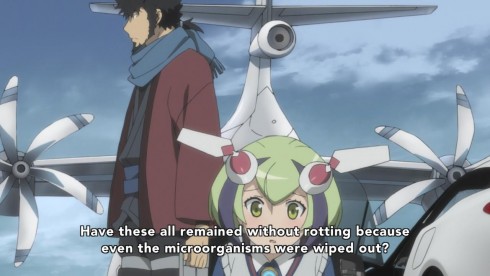 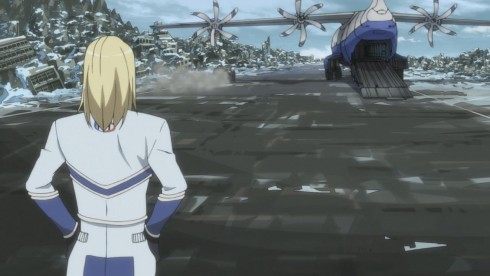 Its unclear as to whether Dimension W will be a runaway success, or if it will become one of those 1-cour series that housed a lot of potential, but could never really become something with staying power. I personally hope it becomes the former, but regardless of the future, what I will say about the present is that I’m enjoying the show a lot, even if it feels like the remaining 4 episodes are clearly not enough to really take in everything about Dimension W.

The focus continues to oscillate between Kyouma and his story, Salva and Loo, and then of course the rest of the Collectors that have arrived on Easter Island. Each of these stories are interesting by themselves, but as we’ve often seen with other stories, adding too much and having it all happen at the same time can really muddy the waters. Thankfully, I don’t think that Dimension W actually falls into that particular abyss of problems this week, however, and it just barely skirts the line between too much and just enough. 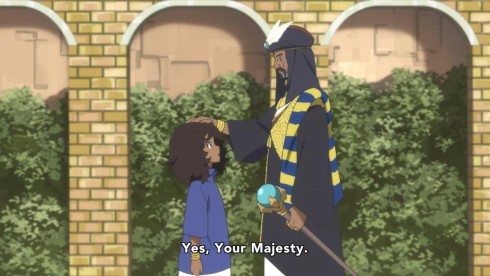 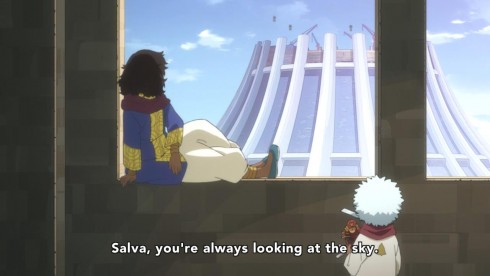 The story of Salva and Loo, for example, really picks up this week. Last week, I had expressed my distaste for the cultural ignorance found in the portrayal of these characters and That doesn’t quite go away in this episode either. We see “Africa” as a stereotypical, almost Disney Agrabah esque place instead of the kind of place Africa would actually be. The architecture is so persian that it hurts every time the word Africa is associated with it, and it definitely feels like the source material itself, drops the ball here.

But… But, if you suspend your disbelief regarding the setting, Salva and Loo’s story actually works quite well. For one thing, its surprising to note that Salva isn’t as much of a jerk as he was first made out to be at first. The fact that he’s an adopted son who became a prince, is an interesting little twist. But what really sets Loo and Salva apart, is the fact that Salva doesn’t begin to hate or dislike his brother once he’s born. 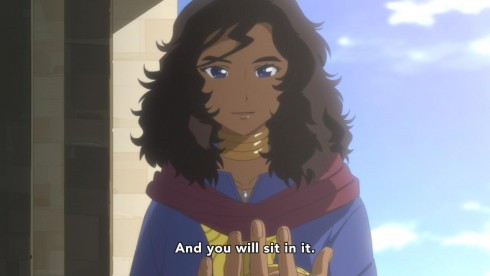 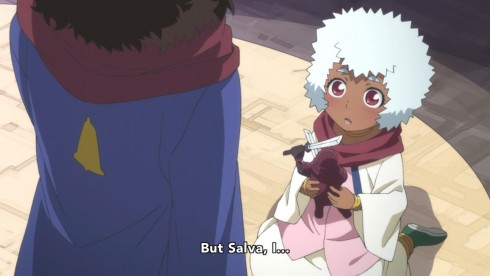 That’s just so refreshing, if only because there are waaay too many stories of adoptive princes hating their legitimate younger siblings. Thankfully, Dimension W doesn’t go in that over done direction and instead has these two princes working together to realize a mutually beneficial dream. Salva’s dream is to shape the world, and then have Loo sit on the throne of that world as its ruler. Its kind of villainish, but there’s a sense of love and nobility to it.

And to make matters ever the more interesting, Salva isn’t actually “alive” in the present at this particular point in time. Whatever that weird sphere was that caused havoc on the ship last week, it seems to be targeting men in particular. Salva is out of commission, but the collector’s party presses on without him per his instructions. It seems that whatever it is that’s one Easter Island, its something that’s worth risking Salva’s life over. 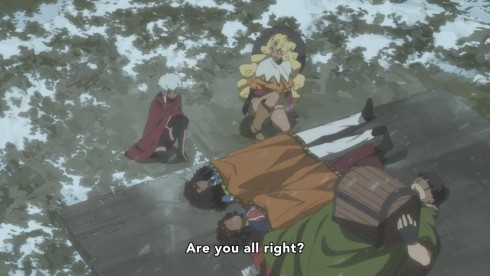 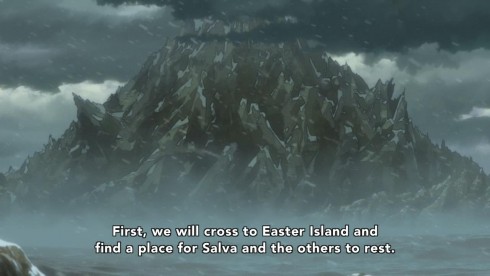 But what is that particular thing? What is it that Kyouma and everyone else is chasing at ground Zero? Its not entirely clear, but I think it has something to do with those different “possibilities” that reside in the W Dimension. There’s a curious bit of information that comes from the various little bits of chatting between all the collectors. It seems that Whatever stasis period the Island was in, has been interrupted by the arrival of more people, and with it, it seems like all the other “possibilities” that existed in the nothingness of the w Dimension are starting to materialize.

Are there a bunch of trapped realities inside a fairly hairewire coil? One that was able to change the outcome of reality itself? Is Kyouma looking to use that coil to change the present reality? or is he just looking to end it all and move on? Personally, I think its the latter, if only because Kyouma mentions that he intends to destroy the coil that’s caused whatever tragedies we’ve seen thus far. 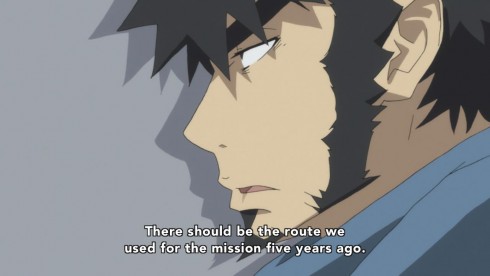 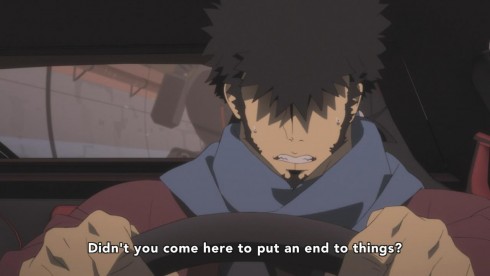 I think Kyouma has definitely moved on to the point where he doesn’t want to be haunted by endless possibilities of what could’ve been, and its probably why he’s here doing what he’s doing. Its an interesting concept, even if a lot of the groundwork to understand is left to the audience, almost unfairly so.

its unfair, because there are a lot of moving parts to this episode, and the deeper meaning can easily be lost in the confusion of it all. There’s the whole bit with Loo and the other collectors arriving on the Island, and moving in their own directions. There’s also Kyouma’s arrival and subsequent meeting with two of the collectors, a sibling duo that seems to be good at digging holes. And then there’s one of the collectors that seems to have some kind of medical background and is conducting some kind of medical experiment here himself. 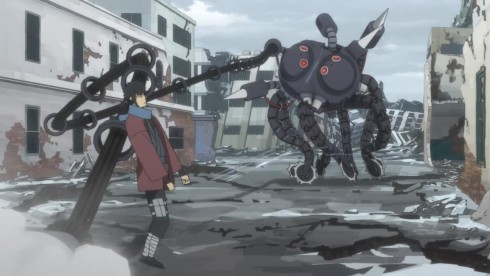 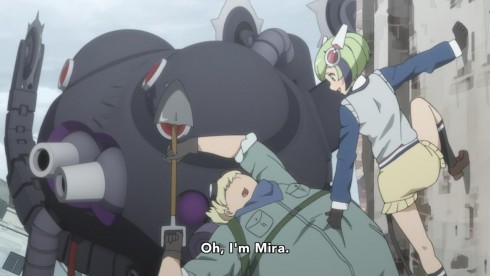 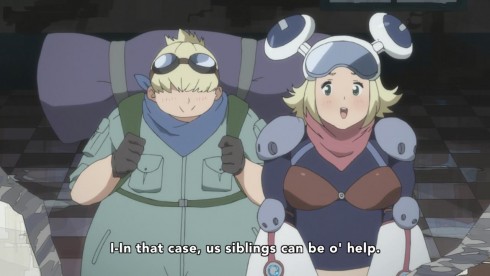 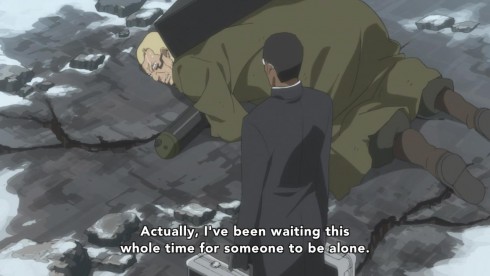 All these different parties are moving throughout the episode, inching towards their own goals. Kyouma ends up teaming up with the Digging Brother/Sister Duo, and there’s a nice little battle with Mira and Kyouma working nicely in tandem. Speaking of which, the dynamic between Kyouma and Mira remains ever fascinating.

Kyouma continues to treat her a bit coldly, but its clear that Mira’s very human-like behavior is starting to get to him. The scene in the tunnels, with that brief drive through the “nothingness” is powerful. Its powerful because its one of those instances when Mira acts like a typical scared teenager, and one that’s looking for reassurance from Kyouma. Kyouma himself definitely is starting to feel something about her, but its too early to tell if he’s actually going to accept her or not. 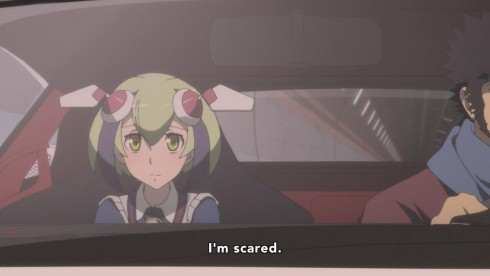 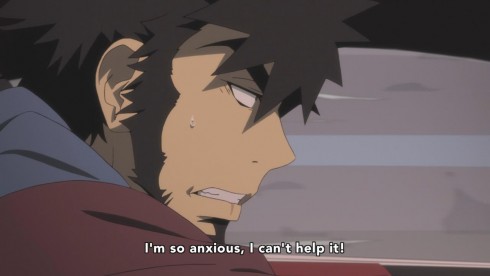 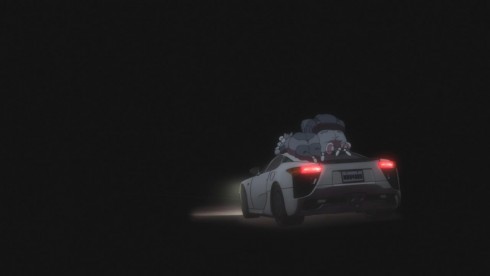 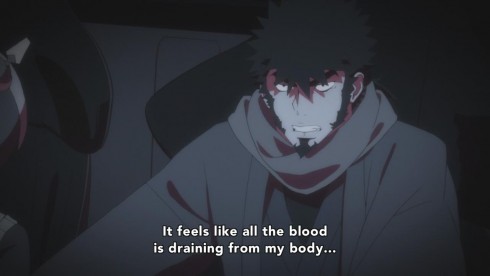 That drive through the nothingness though? That’s a really sweet Sci-fi moment, right there. Its one of those tense sequences that feels claustrophobic, tight, suffocating and immensely uneasy. It only lasts a few seconds, but it really does feel like a very narrow brush with death for Kyouma, Mira and the two digging people atop their car.

Oh and lest we ever think of forgetting, Loser is the one who makes his appearance directly after, bringing the episode to a screeching halt, at least for this week. Loser himself is an interesting party in the events of this whole story arc. What exactly is his goal in uncovering the truth behind Easter Island? And is he a friend or foe to Kyouma? Its clear that Loser seems to know a lot about coils, even more so than Kyouma. Last time, he was an unlikely ally, but it remains to be seen if that will be the case again, this time. 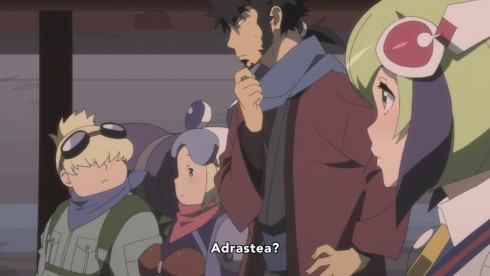 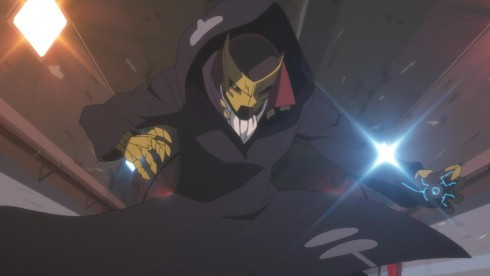 So many unknowns, and there’s so much to go over, with only 4 episodes left. We still have to find out what Adrastea really is, and how it lead to the great tragedy that befell Kyouma and his unit. I’m not sure how Dimension W will fair as an overall package, but… At least in the moment, its really really a fun and enjoyable time, every week. 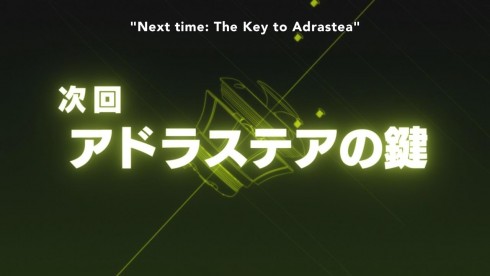 The Key to Adrastea huh? Well we’ll see it all next week I suppose.