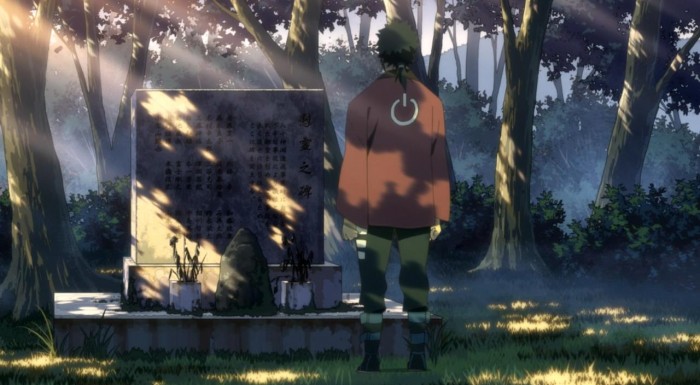 Dimension W, for good or for ill, embodies the soul of a classic science fiction anime series from the early 2000s. Up til now, I’d say that’s worked very much in its favor, both as a manga and definitely as an anime series.  Of course, as anyone who actually remembers the golden age of sci-fi will tell you, there were some things (not many things but definitely some) that were a bit irksome to say the least.

Ever since the very concept of a Dimension collapse was presented in the show, I knew, just knew, that something like this week’s episode was going to come along sooner or later. The idea of warping reality, different levels of conscience and the idea of existence, all that philosophical stuff, is a big part of sci-fi in general. The brand of psychological, mind numbing stuff that we saw this week, however, definitely reminds me of a time when Anime was totally obsessed with the idea of cyberpunk sci-fi, and how, at least for me, it didn’t always work. 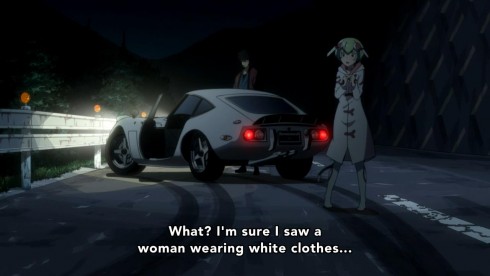 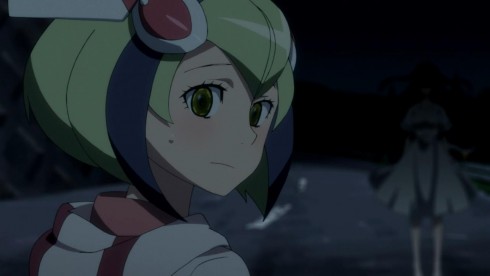 This week, the ghost mystery case of the week involving a numbers coil, was very much the showing diving into that kind of sci-fi. The psychological, weird, reality altering stuff that can sometimes just not make that much sense, or, as is more often the case, seems more complex and confusing than it really should be. Dimension W isn’t quite there yet, but the signs are there for me to start to worry a bit.

Again, as anyone who’s seen stuff like Ergo Proxy, Ghost in the Shell (the original movies), Serial Experiments Lain e.t.c, will tell you, Dimension W isn’t quite jumping into the crazy, psychedelic sci-fi space that some of those other series find themselves immersed in. That’s what ultimately keeps the episode engaging for me, at least, and keeps me firmly grounded into a satisfying viewing experience. 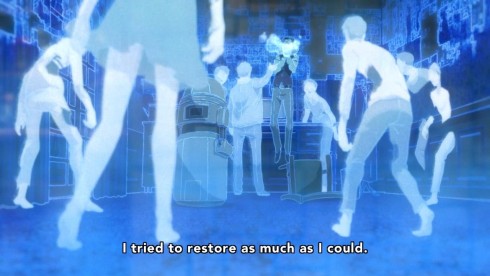 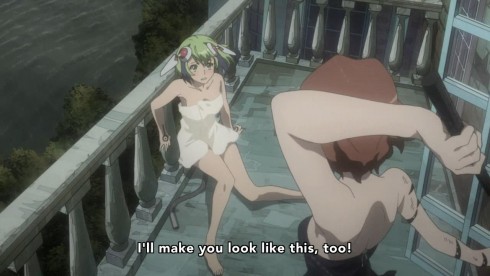 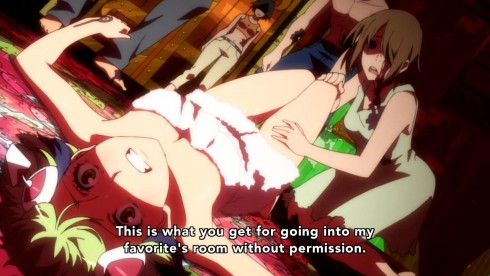 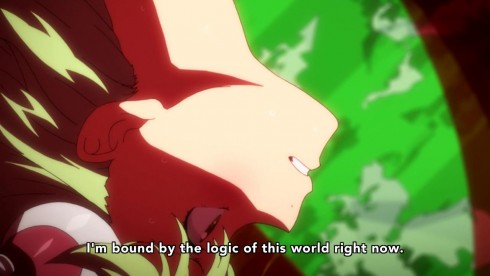 Sure, There’s the idea of ghosts existing in another dimension (the w dimension) thanks to some kind of Dimension collapse caused by a numbers coil, and we see a rather twisted, weird and overlapped version of reality through Mira’s eyes, but through all of that, the show continues to present a tone that feels more contemporary, lighthearted and fun and positive, despite whatever dark subject matter is at the heart of the story.

That’s one of the reasons I really enjoy Dimension W, because its got one foot firmly planted in the present, and reinterprets the past through that particular lens. Yes, its not entirely clear how the writer who drowned in the last episode, Sakaki Shijuro, is actually alive an overlapping, illogical dimension, and its not clear how that dimension is actually affecting Mira, but, even without an explanation, there’s enough room to get the gist. 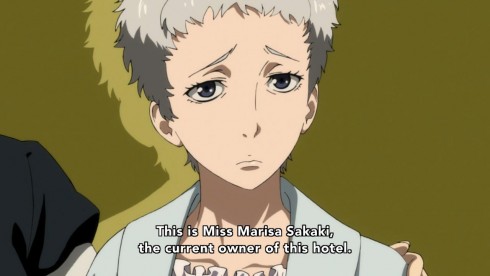 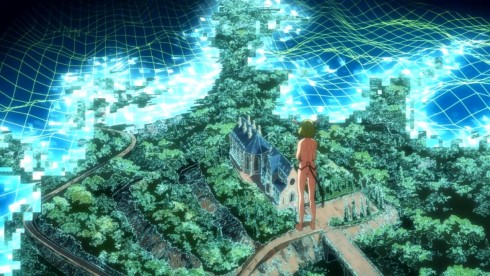 We may not know how yet, but it seems that Mira, can actually access both the “normal” dimension, and whatever parallel twisted dimension that Shijuro and his zombies occupy. Its also not clear how his sister figures into it, and just how much these so called numbered coils can alter reality, but I do think that those answers will come. Dimension W hasn’t given me a reason to doubt it yet, even in this episode. This episode really was just part one, with the mystery and the really really odd situation being established, Kyouma and Mira figuring it out at least, and the audience is sure to get their answers next week.

And I think, even with the weird reality bending scenario here, there’s some good character moments strewn about. The focus this week is definitely around Albert and Kyouma, and their whole relationship. Despite whatever animosity Kyouma has for Albert on the surface, it does seem like the two are good friends, comrades and people who at the very least, respect one another. 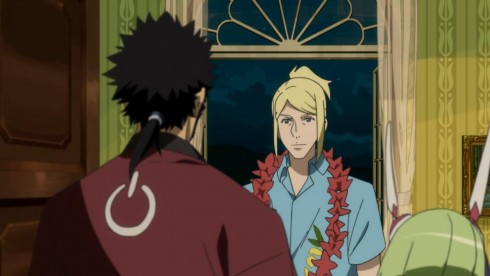 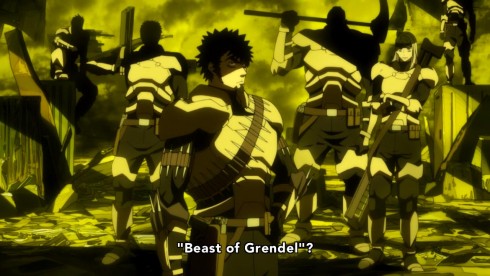 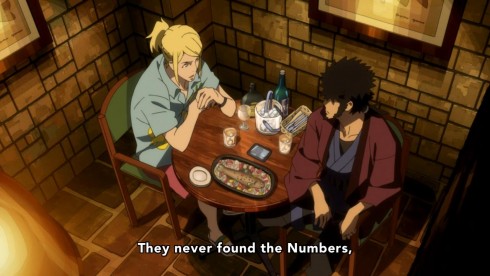 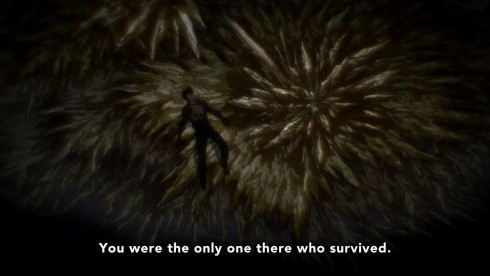 More interestingly, however, was the revelation that whatever incident decimated Kyouma’s Grendal unit, and labeled him a beast of Grendal, well, Albert wasn’t exactly there when it happened. He’s a soldier like Kyouma, but it seems like Kyouma’s the only “survivor” of whatever horrid dimension collapse happened in his past. The mystery of Kyouma’s past continues to slowly unravel, bit by bit with each episode, and that’s one of the appeals of both the character and the show as a whole.

On a related note, I really am starting to like Albert Schuman more and more with every passing episode. He’s got a playful nature to him, but there’s also a sense of genuine likability and a sense of dedication to his job. The way he plays off of Kyouma just works every time, and every scene with the two of them in it, just exudes that sense of friendship and rivalary and understanding that two have for one another. That’s clearly been gained from fighting together, side by side. 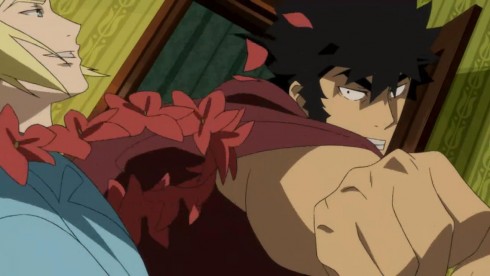 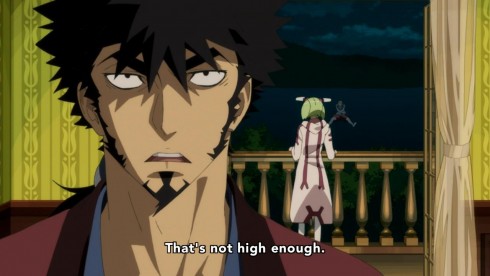 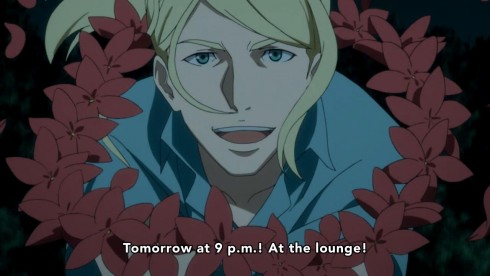 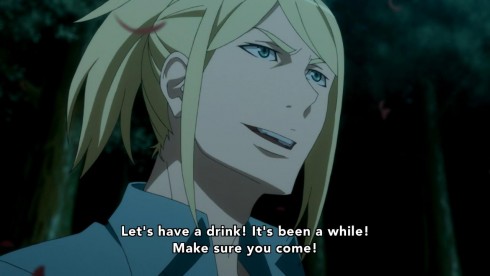 The very presence of a character like Albert Schuman, by the way, makes this series feel very modern and contemporary. In the science fiction series of old, you’d be hard pressed to every find an eccentric, playful character like Albert in a sci-fi show with a touch of the macabre. Its because of characters like him and Mira, that this show does definitely continue to feel uplifting and never quite descends into the realm of depressing.

And speaking of characters that wouldn’t fit in a dark sci-fi series, this week we also meet another collector, Elizabeth Greenhough-Smith. Elizabeth is a girl that seems to be some kind of vampire goth fan, with powers and such to mirror a sort of different show entirely. Its obvious that her vampire like powers are a result of coil and modern tech, but the fact that we have a character like this, in a show like this, and she doesn’t feel out of place? That’s kind of impressive in itself. That’s what Dimension W is though, a fusion of the new with the old, and through that, it becomes something fresh and unique, able to stand on its own. 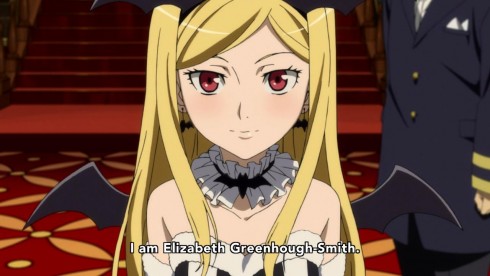 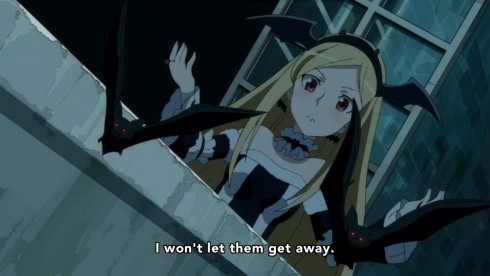 Elizabeth doesn’t do much this episode, but I’m sure that much like Loser, she’s going to be an interesting side character to watch, and one that Kyouma and Mira are sure to cross paths with multiple times in the series. Mira herself seems to have some sort of relation to Elizabeth, so much like Kyouma, it’ll be interesting to see where that particular thread leads.

Now, As for Mira, it is worth pointing out that the fanservice for her this week was off the charts. Fanservice isn’t exactly anything new, whether its the stoic, matter of fact nudity from the old days, or the more focused on, lingering approach of today, its always there. So I can’t say I’m surprised when I see Mira being completely and utterly being milked for all that she’s worth when it comes to fanservice, and ultimately, I’m sure part of that is a pretty obvious tactic to help this show become a commercial success in Japan.

Me personally? I didn’t exactly mind it, though it did surprise me and feel a bit… Out of place. There’s some inherent irony in the fact that a female robot is being objectified in a very sexual kind of way, but I don’t think that’s the intent of the show itself. Its just something that happens, and its there. Given that Dimension W is a Seinin manga, I guess I’m not surprised by what we got this week, just that it seemingly took this long.

Beyond the odd fanservice, and the trappings of a more psychological, mind numbing approach to the actual world building, I think Dimension W is still the same series it was 3 episodes ago when it started. At times, I’m sure it’ll dip into the less intriguing aspects of traditional anime sci-fi (at least to me), but I think the fact that the show has a particular tone, a particular feel that continues to stay strong and consistent, makes me generally like even some of its less stellar aspects. 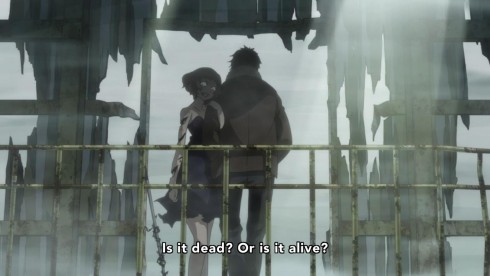 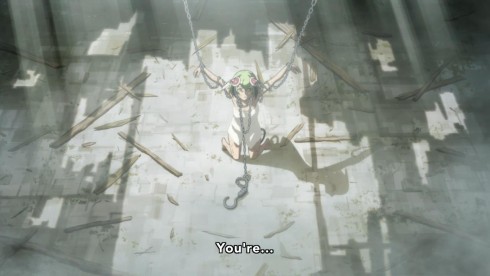 If there is one thing that is stellar though, its the production, particularly the art direction and animation. When a show is as immersive as Dimension W, its easy to overlook and take for granted just how darn gorgeous it looks. Much like Sakurako-san no Ashimoto, this is a series that just really nails lighting, the use of color and creates a mode and an ambiance through the use of clever art direction.

The backgrounds and locales are a superb mixture of modern Japanese architecture and the countryside, mixed with classic European Gothic and more contemporary modern urban japanese cities. It all looks breathtaking, immersive and stylish, without feeling too over the top or distracting, something that even some of the best shows have trouble pulling off. 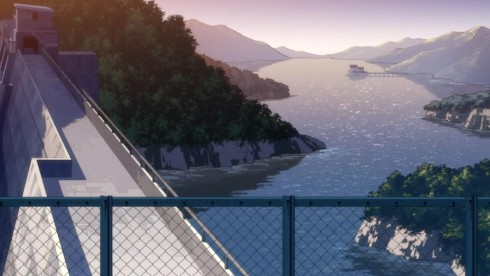 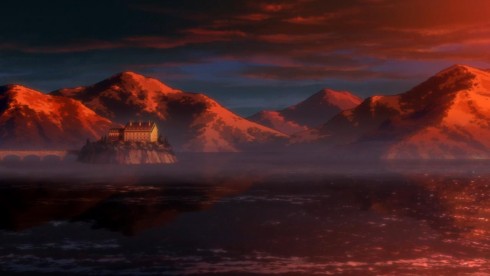 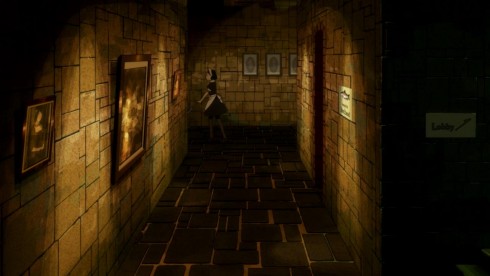 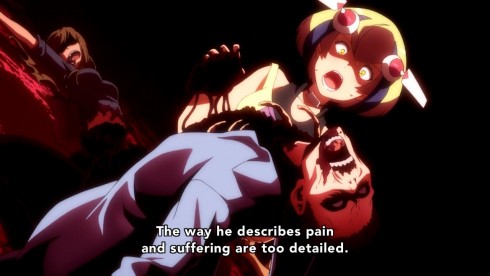 Having a few flaws or chinks in the armor was and is standard fare for some of the most remembered series of old, so I think Dimension W is fine as it is, at least for now. There’s a danger that the series could go very much off the deep end, but its a danger that seems pretty unlikely. More than anything, I’m more interested in seeing how Dimension W unravels the rather confusing web its spun this week, and how it goes about explaining everything next week. That, I think, will be the true test for the series. 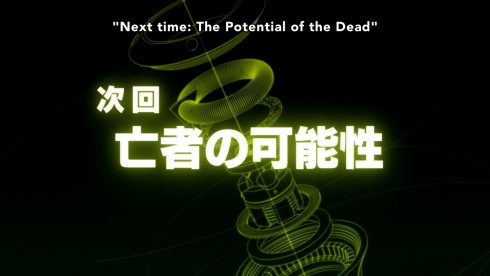 The Potential of the Dead eh? Yeah, I don’t think we’re going to be disappointed next week. I’ve got a very strong gut feeling here, and it tells me that we’ll be fine. See you all next week!