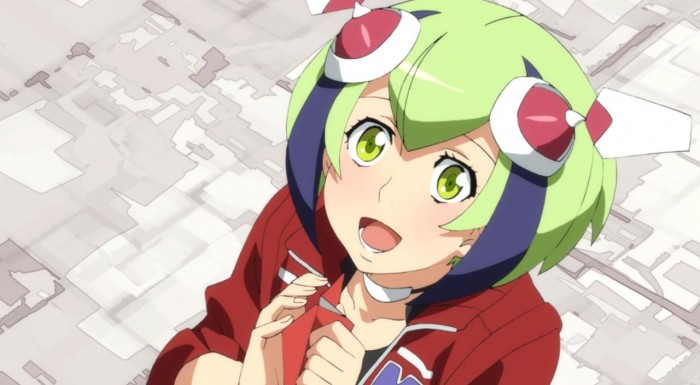 Dimension W continues to prove itself, week for week. We already knew it was a solid sci-fi show, one with solid characters, both in terms of our protagonists and our villains. This week continued the character building, as Mira slowly but surely started to fit into her new situation and life.

I have to say, I’m really enjoying the dynamic between Mira and Kyouma. Its so off the cuff, odd and fresh that it just ends up being entertaining and funny without even trying too hard. Kyouma is a man of few words, while Mira is an earnest, pure and very likable young girl, and the way those two personalities converge on one another is just so chuckle-worthy. 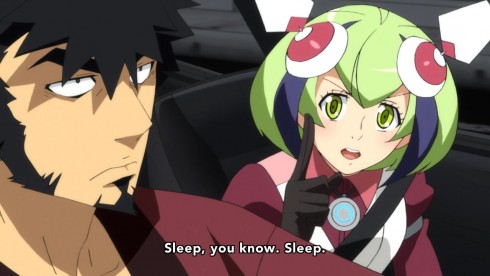 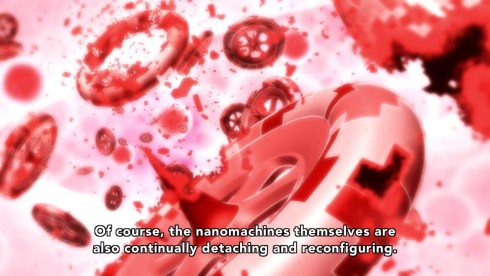 A big part of the humor is in the fact that Mira, for all intents and purposes is a human girl, in all but name. She has to sleep like a human, she has to go the bathroom, and she’s got her own desires of a personal space and other basic human necessities. Dimension W just plays with the whole trope of a human-like Android and makes her basically exactly like a human, except powered by nanomachines and inorganic matter.

What’s great about Kyouma slow and quiet realizations about Mira, is that it happens absent of nearly any dialogue. Its faint, but there’s a clear indicator of a rising degree of respect that Kyouma is starting to feel for Mira. Sure, he’s not entirely a huge fan of coils, and is entirely in the mood to be chummy with ANYONE, but he’s not a heartless bastard either. 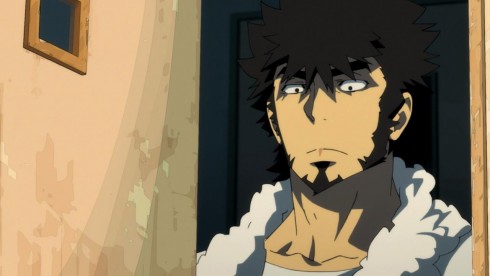 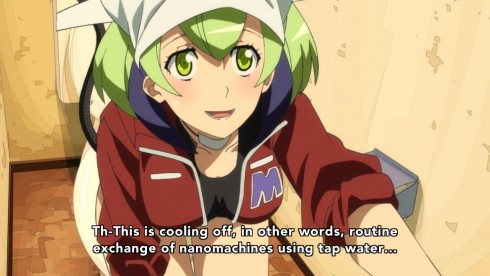 In being the way Kyouma is, there’s an almost distinct feeling of a real person there, albeit one that’s clearly anti-social. And I think the fact that the human in the story is more of like a cold hearted machine, while the Robot is an emotional teenage girl is a pretty intentional statement here. It all falls in line with the classic element of the “what is being human really?” that most Sci-fi stories and entertainment seem to touch on, to some degree at least.

Its hard to really call Mira not human, because everything that the show is doing makes her FEEL human. There’s a real element of sadness to her existence too, as I myself can’t help but feel a yearning for her to ACTUALLY be human. There’s that sense of her being a full android being completely needless, almost unnecessary, if only because you like her so much that her being a robot feels darn unfair. And that’s to the credit of Dimension W’s writing and character depth, because it makes you feel this way about a character. 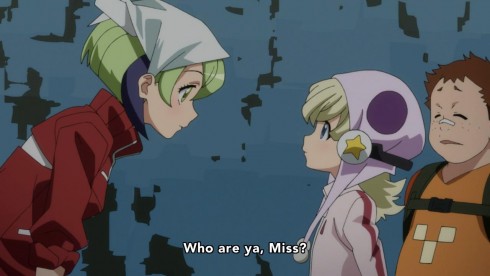 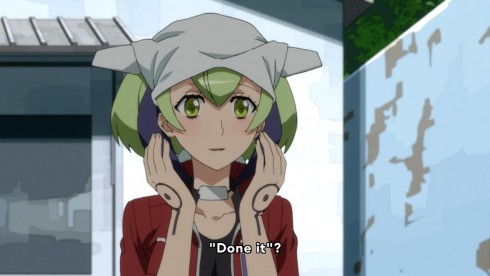 I’m not sure what the show’s grand plans are with Mira, and what her hidden, latent power is all about, but I’m confident in the fact that Mira being a robot and android is in service to some larger story element or plot point that the show will hit us with later. At the moment? I’m content with seeing Mira exhibit the same kind of issues and feelings that a teenage girl would feel.

There’s the slight nod to a potential romance between Mira and Kyouma, and its thankfully discarded and put away soon after. If anything the two of them seem to have a very father/daughter or uncle/niece vibe to them. I think that is the right way to go, and I don’t really believe Kyouma is actually ever going to love ANYONE, even if he does end up caring for Mira deeply by the end as a protector. 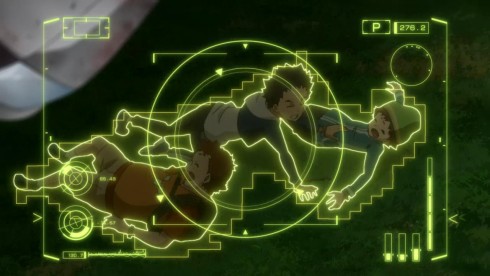 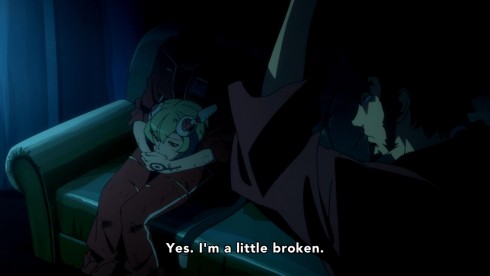 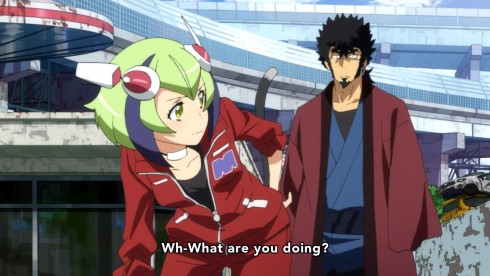 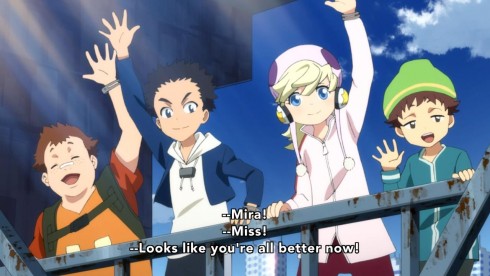 In terms of personal crisis though, Mira had her first one this episode, and it was all about making friends with a bunch of kids. If you remember the kids that Kyouma scared off in the premiere? Well they actually make a return this time, and end up being befriended by Mira. Kids being kids, they end up getting themselves in a bit of jam, which Mira ends up saving them from, at the cost of losing her head.

In a welcome change of pace, Mira’s heroic sacrifice actually ends up getting her friends, rather than have her be ostracized or viewed as some kind of monster. The kids feels grateful for Mira having saved them, and actually end up liking her and accepting her as one of their own because of the kindness she shows them. That really does set a nice tone for the show in general, in that it might be sci-fi, but its entirely dark and depressing sci-fi either. There are good people, and there are bad people in the world, and I think its great Dimension W is not above throwing some optimism into its story. 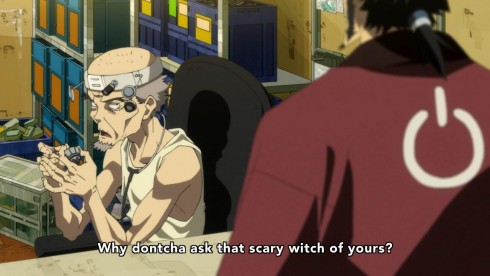 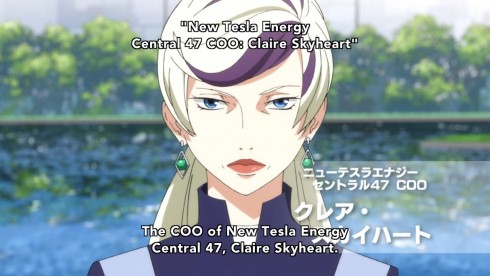 But beyond just developing Mira, and giving her a new home to inhabit, this episode actually did move the plot forward a bit, in rather small doses. We learned about the true nature of the Numbers, in that they’re prototype coils that have a lot more power than the traditional coil. Its because of that power, that they’re also likely to cause greater destruction if they create a dimension collapse. It seems the numbers are at the heart of the shadowey stuff that the New Tesla Corporation seems to be dealing in and hiding behind the scenes.

We also get a look at the CEO of New Tesla Corporation itself, a woman named Clare Skyheart. In an interesting little twist, its Mira that ends up saving Clare’s Granddaughter earlier, and thus there’s a little bit of a connection between our heroes and what we can assume is another anti-hero or antagonist? I’m not sure. I don’t feel comfortable lumping anyone into a hero/villain category just, if only because the show itself hasn’t. 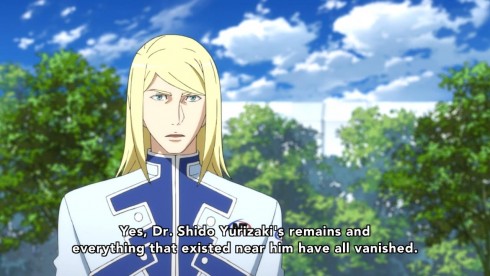 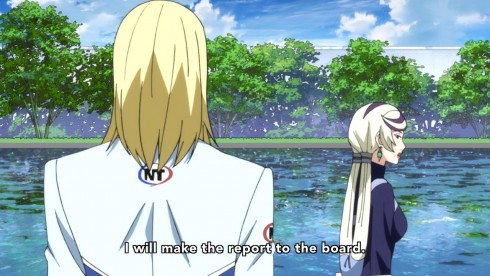 What is interesting, at least for me, is the fact that Clare is an actual character in the cast. I had expected New Tesla to be a nameless entity, a corporation that loomed in the background almost. But putting its COO as a character in the cast, well… It humanizes and puts a face on that corporation. Its another thing that I think is just entirely unexpected, and refreshingly so at that.

The final piece of info we get, is about our old pal Albert Schuman. Seems like Kyouma isn’t the only Beast of Grendel and that the other survivor of that whole army of anti-coil warriors is Albert Schuman himself. That actually explains a lot of his history with Kyouma, and I’m sure their whole past is actually going to play a big part in the overall story. 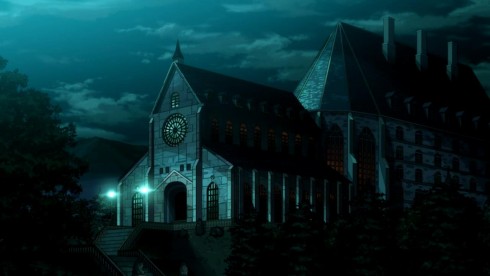 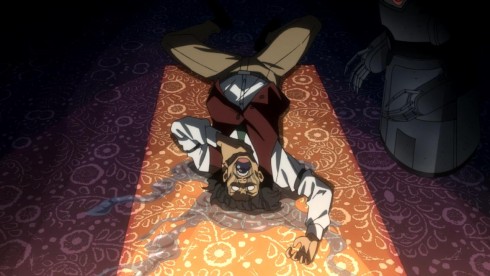 And It’d be remiss of me to not mention the robot and the dead rich guy that the episode closed on. That scene did give a serious sense of whiplash, but I think it was Dimension W reminding its audience that the feel good episode this week was the occasional exception rather than the status quo. For me, that’s not really a problem, and I’m all for diving back into whatever weird and scary things are hidden in this show’s unique world.

Character centric episodes like the one this week though? They make a show like this infinitely stronger and better, so I’ll always be up a nice, calming character development episode that makes me like my two protagonists. 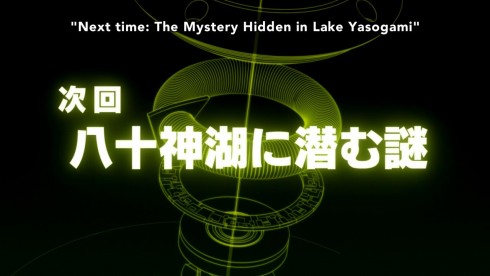