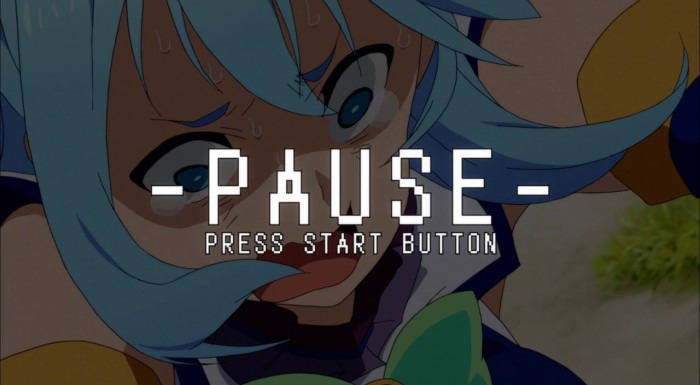 And one of the last of the new shows this season has finally arrived. I have to say this is the show that most surpassed my expectations. If Hai to Gensou no Grimgar is considered the dark fantasy of the season, where everything is bleak but realistic then “Kono Subarashii Sekai ni Shukufuku wo!” is the hilarious fun that a fantasy show can be. This is easily the most hilarious first episode for me of the season. The first half had me just losing it at times with how darn funny this whole show is. The main duo is like the perfect setup. You have an above average in intelligence, but average guy matching up with a below average intelligent, but elite goddess XD. Both of them have some real attitude that makes them going at each other really fun to watch. Unlike some shows where one character just takes all the abuse and you can’t stand the one bringing the insults, in this show both of them have some spark to them.

Aqua had the edge early in the episode. She was just hitting Kazuma hard with the details of probably the most pathetic death in history. A death so bad that frankly I wouldn’t want to reincarnate into the world that reacted to my death in such a manner. But, Kazuma fairly quickly turns the tables right back on Aqua by designating her as the “thing” he was bringing with him to the new world. Now objectifying people is bad, but here it feels appropriate since she basically started it. If Aqua was a mature goddess who treated Kazuma with some respect then he wouldn’t have lost his temper and dragged her along. 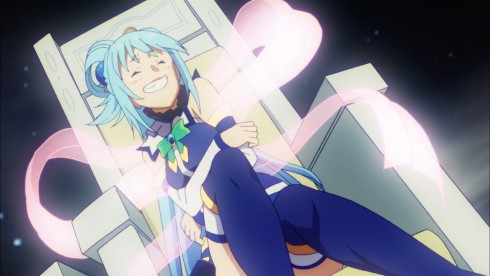 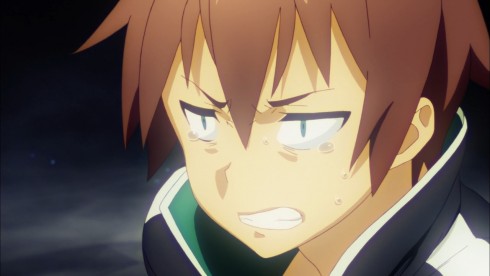 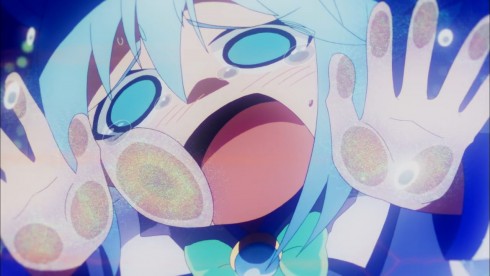 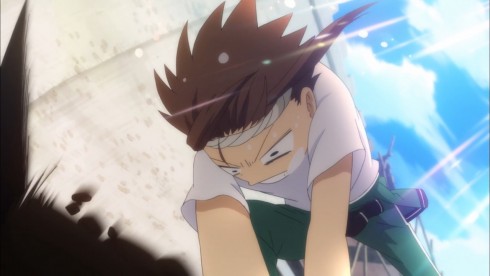 It was just fun watching them go back and forth. Kazuma would look really reliable in leading them where they had to go. And then he’d fall flat on his face because he doesn’t have money and his stats are actually really average. The best he has is above average intelligence and extremely high luck. A stat that works better for a merchant than an adventurer. Aqua hardly stays in the lead though since when she tries to drum up money with her status, she isn’t believed and is given pity money by the follower of a goddess who is ranked below her XD. But then she rises right back to the top when their stats are revealed and she gets the hero treatment that Kazuma had been wanting for himself.

This show is just fun. The characters are just flawed in an entertaining way. Kazuma has a horrible death. I thought he was going to die by stumbling into traffic due to his exhaustion. But no then he tries to ‘save’ a girl from death. That looks cool, until you find out that she wasn’t in any danger. That instead of a badass death through saving a life, he died of shock thinking he was run over. Everyone around him just laughs despite the fact that he does actually die. I actually feel pretty bad for him. After all that he basically gets to find out that Heaven really sucks. I mean who would want to go there if they have no games or anime!? That’s just a horrifying concept. 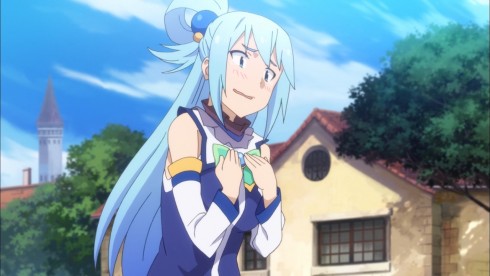 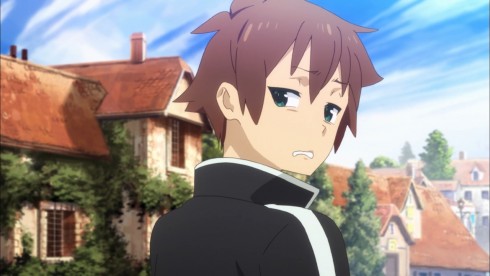 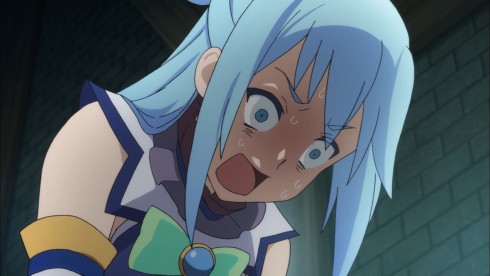 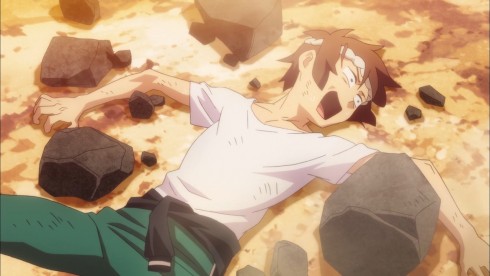 This show really seems to have a great sense of comedy that involves expectations being overturned or people getting the punishments they deserve. Aqua was so utterly cocky that I was thinking early on that I wouldn’t be able to stand her. Making Kazuma’s death to be so pathetic and trying to basically push him out the door onto this new life. But, once the show really got going and she got some much needed payback for that, it worked out. She became one of the best parts of this episode. She really got into the work they were doing. Maybe it’s her below average intelligence (stupidity), but she just seemed very into it. The best part of the episode was easily when the anime literally put up a pause screen in the middle of her freaking out. Her looking so sad that Kazuma was like “ok, whatever this isn’t fun anymore, you can go back.”

Kazuma himself is a pretty fun lead. He has all sorts of flaws and died from stupidity in a sense, but still a cool guy. Using his knowledge he really took control of things and I think that did make Aqua appreciate him a bit more. He also didn’t keep a grudge going forever, but had no problem thinking to himself “well, she’s useless” when she really did seem that way. Not to mention his “evil laugh” when he made clear to Aqua that he was dragging her along to basically support him…that was glorious XD.

The show isn’t a mindblowing visual spectacle, but it wasn’t bad. This is just the first episode, but it was quite nice on the whole.

OP [fantastic dreamer] by Machico : (A+) 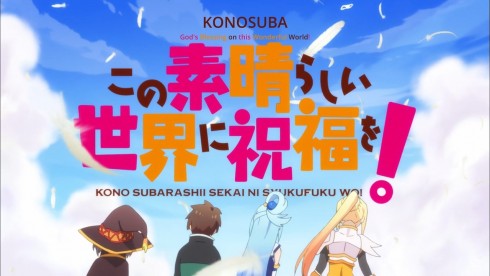 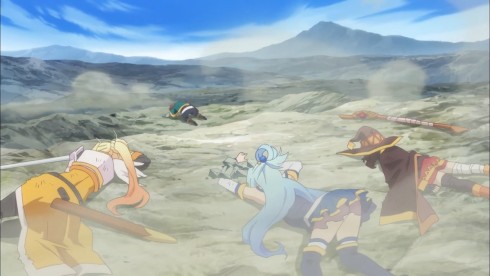 This is definitely one of my favorite OPs from the Winter season so far. It’s just so perfectly in line with the show. Such a cheerful and upbeat OP that matches the hilarious fun we’re going to get with this show. You just get to see the main 4 characters traveling around and getting into adventures. The OP makes clear that this is a group of individuals who are somewhat capable, but also are a bunch of idiots XD. They all have glaring weaknesses, but are still going to be fun to watch. The song is really enjoyable to listen to, it has a lot of energy which works for me. 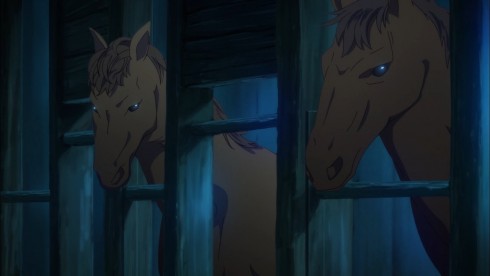 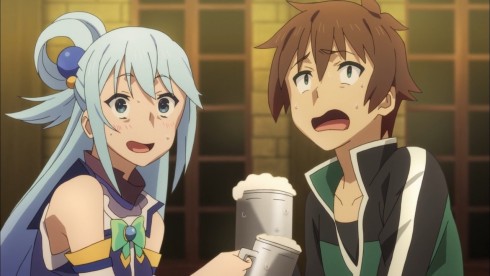 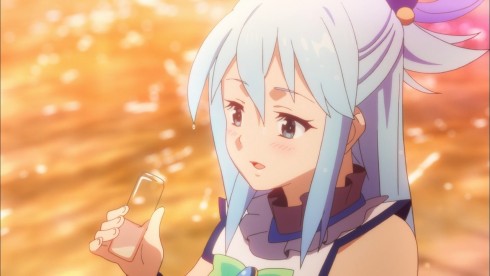 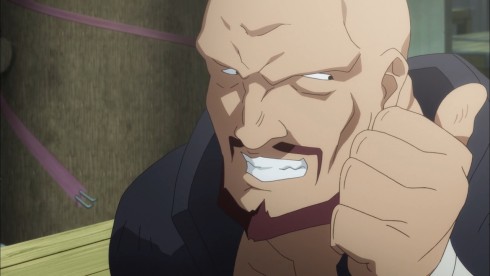 While there are a few shows I’m tempted to blog this season, I probably can’t pick them all up. The odds may not be good that I’ll blog this show full time despite how darn fun it is. Anything is possible, but there’s a lot of shows out there that are plausible to pick up. But, I still wanted to write up this post to make clear that if people need something funny and enjoyable to watch this season, that this show is a very good option. I will without a doubt be watching to the end. It may not be the best show of the season, but it is definitely one of the most fun. Main characters I actually like and want to see more of.