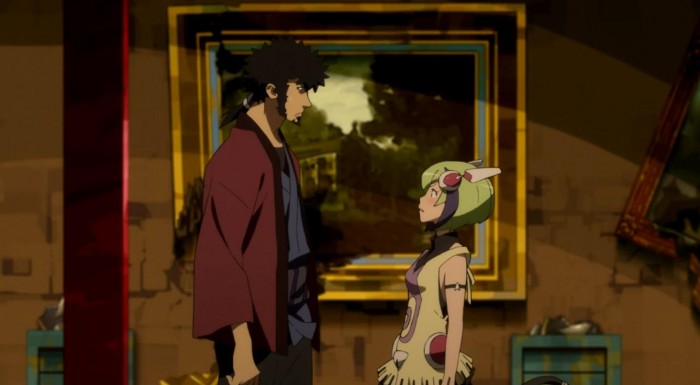 Winter 2016 is an odd season for anime. There’s less “good” shows strewn about the weekly schedule, but there’s a few really GREAT stand out shows that stand tall in the medium itself. Dimension W is actually more of in the good category rather than the great, at least from its premiere episode but its also a series that just… Checks all the right kind of boxes for me as a sci-fi anime fan. 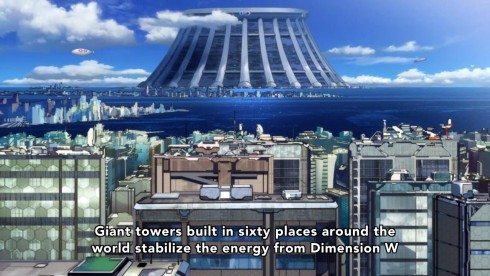 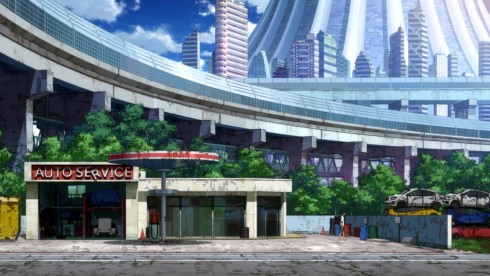 Dimension W is the kind of series that I’d say is really reminiscent of the past. Its the kind of series you used to see a lot in the Early 2000s, but have since more or less died off. Its got that science fiction edge to it, its got an older, grizzled man taking care of a younger teenage girl that needs protecting, and obviously the girl is somehow central to a larger plot that encompasses the fate of the world. If you’ve seen stuff like Coyote Ragtime show, Speed Grapher or Darker Than Black then you have a pretty good idea of the kind of series that Dimension W really is.

And everything about the premiere episode of the series just screams the whole idea of “they just don’t make them like this anymore”. As a fan of those series, as a fan of more mature storytelling and frankly as a fan of just variety, Dimension W is a breath of fresh air. It also signals a revival of a type of series that frankly I’ve missed for quite a few years now, and am just really glad to have back. 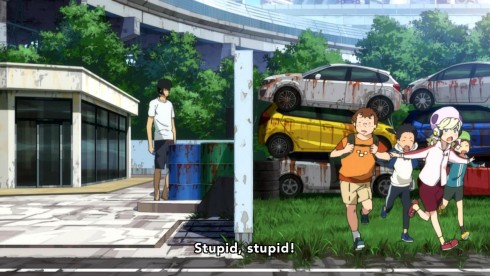 There’s a small little theory that the three of us writers here at Anime Evo share. Genre dominance comes around in cycles. One genre or type of series will be popular for a while, and then will bow out after it hits a sort of saturation point, paving the way for some other type of series to take over, and the cycle repeats. Is Dimension W the first sign of a return to form for series of its type? I’m not sure.

What I do know is that I’m engaged and clearly interested. The problems with the series are pretty apparent from the outset. Its nice, its interesting, but there’s nothing really there to set it apart. Its a show that is there to entertain, and there to provide a sense of real escapism and wonder. Its got a maturer storytelling vibe, that harkens back to the late 90s and early 2000s, but because of that it really does feel very derivative. 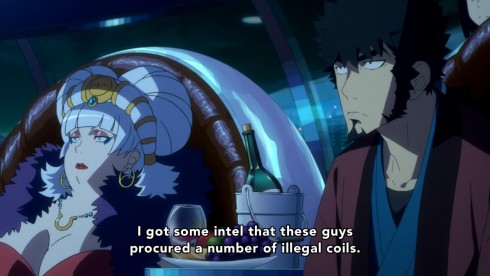 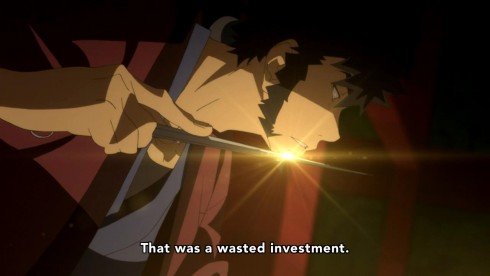 The story from the outset, is a bit cookie cutter and fairly generic. Kyouma Mabuchi (played by Ono Daisuke in his signature badass voice) is a collector, and one that seems to hate the newer form of technology that now seems to rule the world. This new tech, known simply as a “coil” seems to harness a newer form of discovered energy, one that can be found in the newly discovered dimension “W”. Its all pretty standard Sci-fi stuff, one that doesn’t worry too much about the believably of its core world building block, but it just kind of expects you to run with it.

And I did, for the most part, run with it. Kyouma is enough of an interesting character that I found myself being interested in whatever tragedy befell him in the past, and how it led him to hate the current state of the world. There’s that whole, grizzled old soldier vibe to him, one that seems stuck in the old ways and refuses to compromise and move on with the world. As Gasoline and fossil fuels wear thin in the world, and thus prices for those things hikes up, Kyouma spends precious money that he earns through shady “recovery jobs” on gasoline for his car. 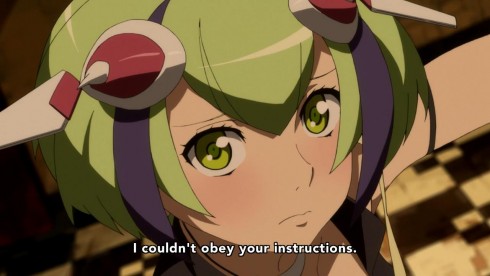 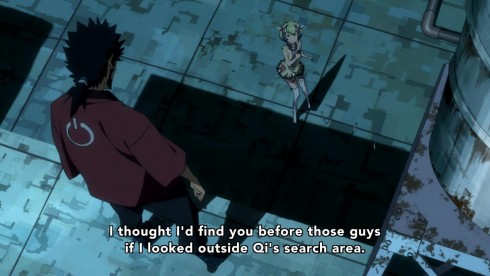 And of course, its on one of these jobs that he runs into the android girl Mira (played by the instantly recognizable Ueda Reina). Mira has the classic trappings of the powerful girl that needs the grizzeled old man to protect her from a world that’s clearly out to get her. She’s nice, kind, and pretty emotional, so basically the old Anime depiction of a teenage girl. She calls the creator of coils, Dr.Yurizaki her father.

Dr.Yurizaki is also, once again, a classic archetypal scientist character. He’s created a new form of energy for the world, lost his family to some shady corporation, and was working on some kind of way to both have his revenge and possibly save the world from whatever evil is heading its way. Mira, of course, is key to that whole idea. You get the picture, this is a story that has a pretty generic premise, all things considered. 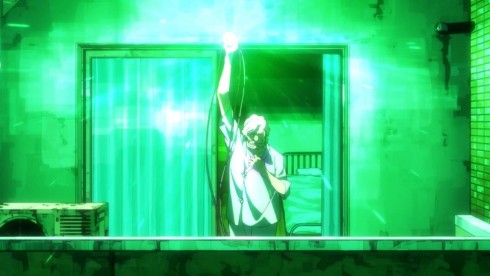 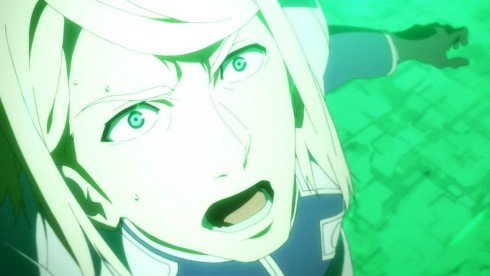 But does it all work? For me it kinda does. Were this 2005? I’d probably not have given Dimension W the time of day, but in 2016? Its scratching an itch that I’ve had for a long long time. There’s good action, both of the two leads seem interesting, and the world in general has enough of a definitive look to it that it feels like something I don’t mind jumping into every week.

The problem is, I think, that that’s just me. Dimension W is a show that doesn’t pretend to be anything its not. What you see, I suspect, is very much what you’ll get from it. Is that Enough? Can a show like Dimension W make it in today’s Anime landscape and with today’s Anime audience? I’m not sure. There does seem to be a bit of fanservice in there, particularly with regards to Mira, but I’m not sure if that’s enough to have Dimension W become a commercial success, at least in Japan. 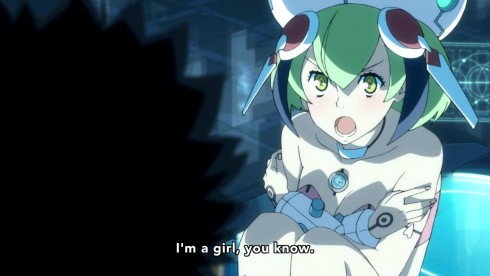 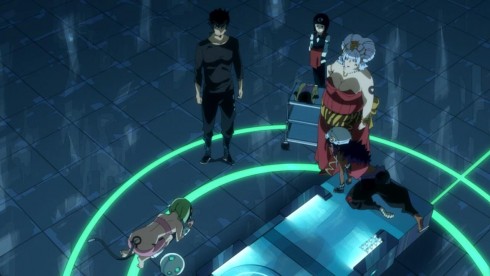 In the west? There’s a better chance of Dimension W appealing to older anime fans, fans like me who grew up watching Anime through the 90s and early 2000s. From what I can tell, however, there doesn’t seem to be much interest surrounding this series, so it may become one of those personal favorite shows that end up flying under the radar. D

I had intended to take a lighter load this anime season, and stick to maybe blogging four series but… Then a show like Dimension W came a long. Its not a show I see getting a lot of coverage from other blogs either, so I can’t help but want to cover it and see how it comes out to be in the end. I’m in it, for the long haul and consider Dimension W to be a show that I’ll be blogging this season. 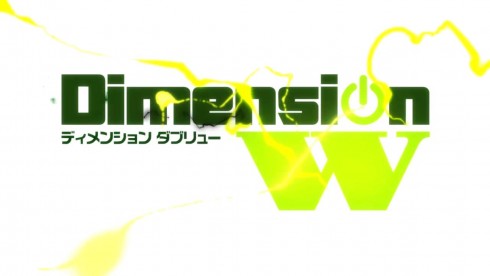 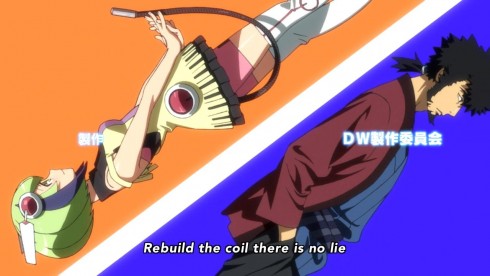 I didn’t give much props to the production of the show in the actual post, but it really is top notch. The opening is perfectly suited the kind of show this is, and the trance-techno j-rock track by STEREO DRIVE is pretty darn awesome. Great OP IMO. 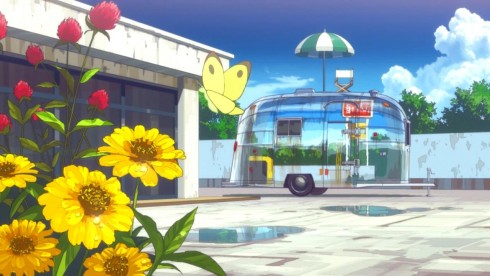 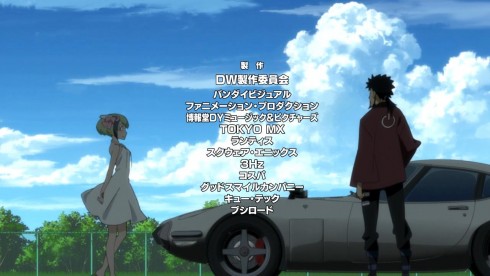 The ED for the show is pretty good too, and fits with what you’d expect from this type of series back in the day. Its all focused around Mira, and is a nice little, playful contrast (hehe…)  to what I’d say the series is actually going to be about. Nice, upbeat j-rock song and pretty well done artwork throughout.