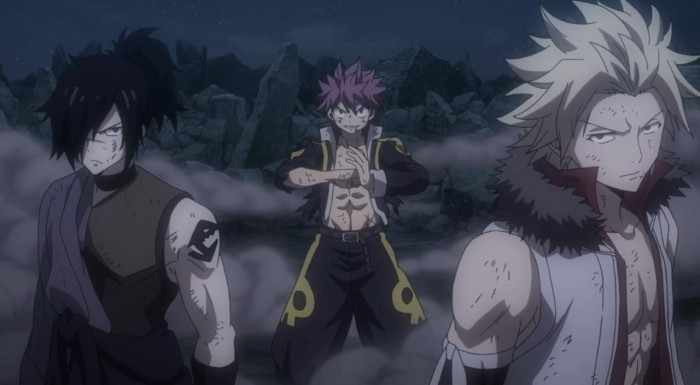 This week’s fairy tail episode gave me an odd sense of nostalgia. It wasn’t a sense of nostalgia for the show, its characters, or even for those times when the show was just so phenomenally good. No, this episode made me remember my own short stint in performance theater instead (as weird as that sounds). The crazyness, the off the rails nature of theater, the good being mixed with the bad, all of those elements are what the recent episodes of Fairy Tail feel like. They feel like a performance that started off great but then degraded into a situation where things started to go horribly wrong about halfway through. 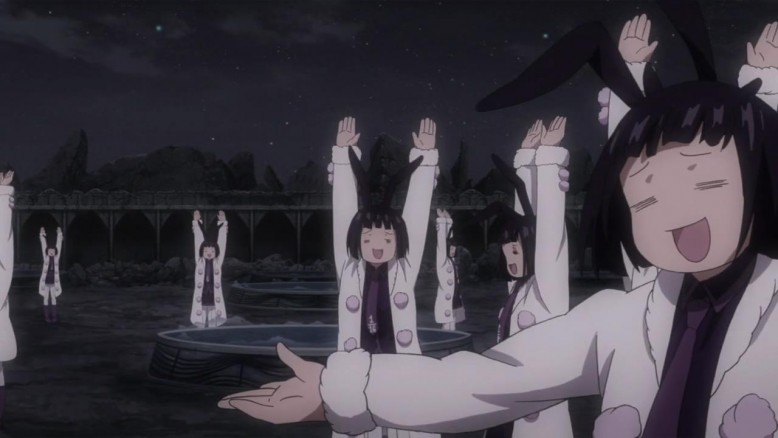 Not That Kind of Performance…

And if you’ve ever been a part of a theater performance, you know what I’m talking about. When things go wrong on stage, you just adapt, roll with it, and try to salvage as much of the story and performance as possible. “The show must go on… After all.”

Maybe I’m reaching a bit, with that analogy, but that really is the best way I can describe the experience of watching Fairy Tail these past few weeks. Each episode will likely have one or two great bits, but be marred by needless padding and stretching, almost as if there’s something wrong backstage and the show is just trying to keep everything going until the good stuff gets here.

This week, had so much needless padding that I’m entirely convinced that something changed midway through the Tartaros adaption itself. The contrast to the start, and even middle of the arc just highlights the fact that something wasn’t planned properly. Now, Fairy Tail is needing to stretch its Tartaros Arc all through December, so that it can meet whatever deadline or schedule that the production staff or committee has set for it.

This isn’t a case of bad writing, it isn’t a case of a bad adaption, because every week, we actually see those things improve. No, I don’t think the onus of the current episodes and their issues is on the anime production staff themselves, but rather on whomever made this outlandish change midway through the adaption. 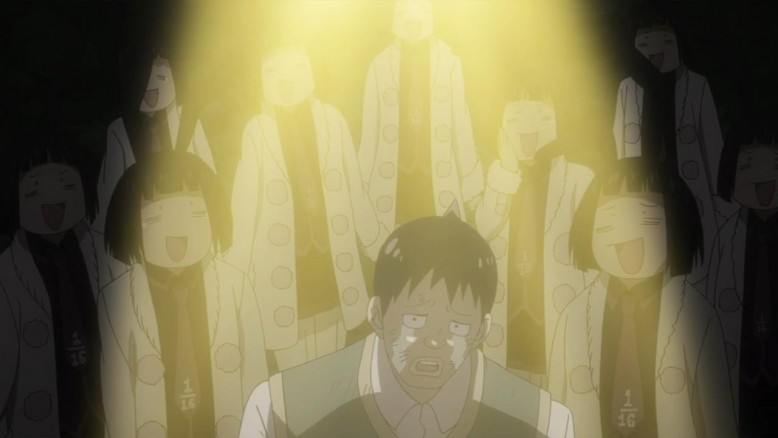 How that scheduling conversation should have actually gone down ^

I can almost picture some executive, coming into what I picture as the A-1 Pictures Fairy Tail animation production room and announcing that the current arc has to run till Early January. “Make it work, somehow, we can’t have this story end before then…”

That little story, the analogy, these are the things that are at least helping me make sense of the massive insanity that we’re getting consistently for a few weeks now… 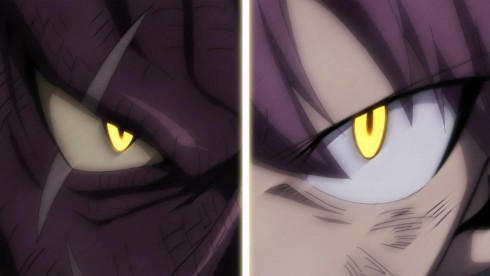 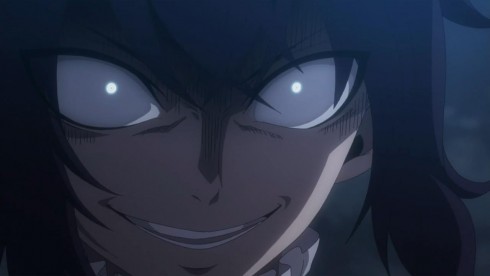 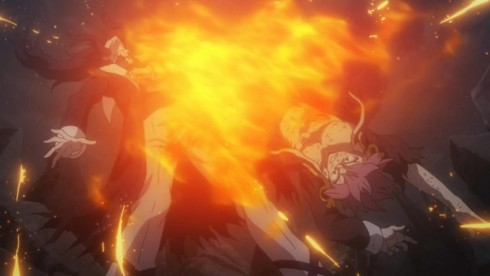 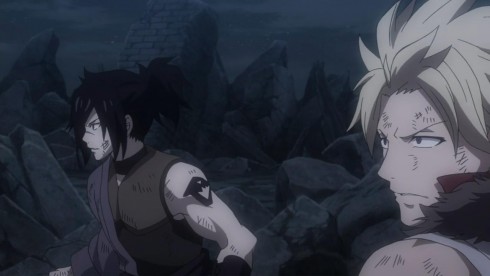 This week’s episode, for instance, opened up really strongly yet again. The fight with Mard Geer seemed like it was finally being settled on, and the animation and art for it was just beautiful. Natsu in motion, all those different camera angles and plays on perspective. It all looked fantastic. I could hardly contain my excitement, because I honestly thought that this was going to be an episode that would just commit. Commit to Mard Geer and Natsu, and finish it all up nicely. Oh how wrong I was there…

That glorious battle? It lasted for a few minutes, before we cut away to more needless padding and filler. The filler and padding, beyond just being stupid, was just so throwaway and obviously “phoned in” that it almost ruined the episode (yet again…). 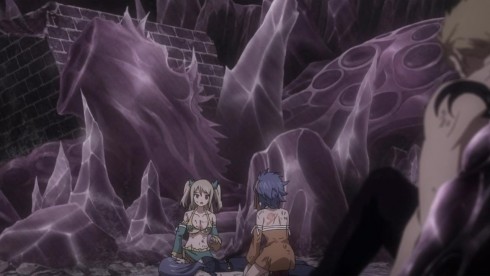 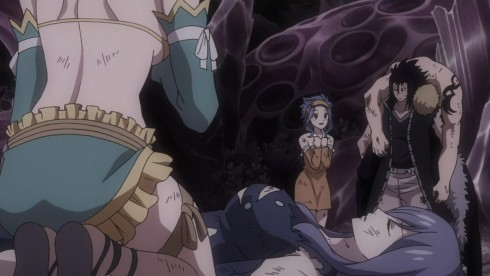 Characters rehashing previous plot points as earth shattering revelations was one thing, and one thing that we’ve seen time and time again. I can’t even count on one hand the amount of times Lucy, Gajeel and Levy have talked about Laxus and Juvia, about getting them medical attention, and about how Gray just received his big power up. Yet… We heard all of that AGAIN, one more time before we finally got some traction on the matter.

Finally, Gajeel and Levy headed off to do something about the darn thing, while Lucy went over to join up with everyone else. I’ll admit, I did like the Gajeel and Levi moments. I think if the anime production staff is going to stretch things out, and keep the audience’s attention, then stuff like this is what we need. At least there’s some nice character moments and humor with the Levy and Gajeel stuff. 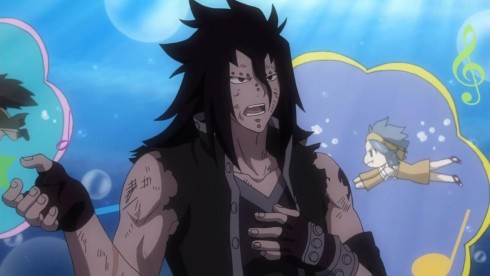 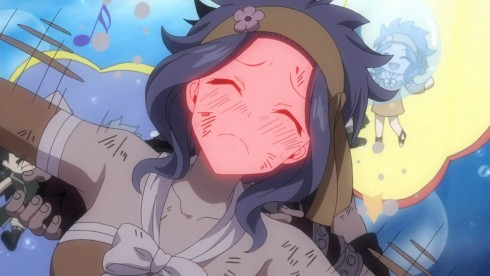 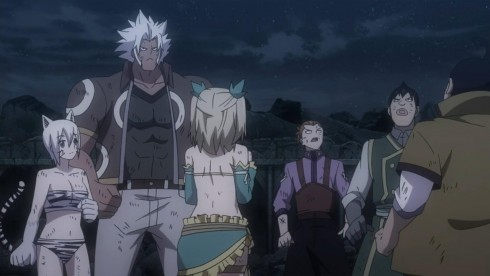 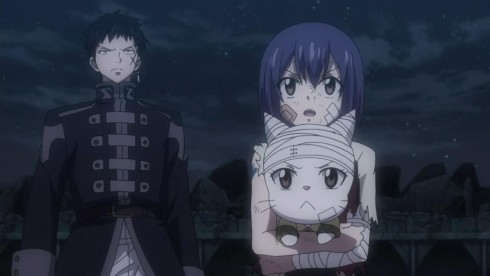 Not so much else where though. Lucy joining up with the others was another chance for everyone to rehash everything about Natsu, Gray, Igneel, Acnologia, and everything that’s happened since. And that scene didn’t even happen before we got some excessively stupid moments of Lammy clones being beat up by Elfman, Lisanna and all the … I mean all the other Fairy Tail Guild Mages…

Once the stupid rainbow, kaleidoscope effects starting showing on screen, you could tell even the animation staff was getting tired of this nonsense. It very much felt like the production responding to the impossible stretching request with: “Lets do colorful rainbows and make it look like an old arcade shooting game… We just need to fill in time anyway right?” 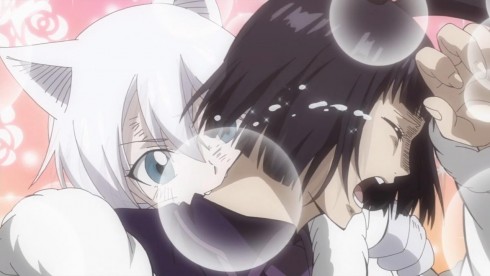 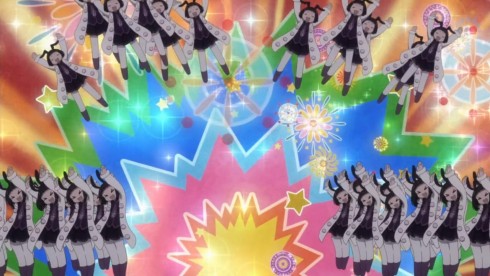 Once we got through all the Lammy crap though, things hardly got better. The lengthy discussion of recaping prior events just kept on going. Wendy got roped into it, then the discussion of the Thousand Faces came in… But I think the worst insult was with Erza.

Poor Erza, you’d think she’d been through enough in this arc, both as a character and as a person. She’s suffered horribly when dealing with Kyouka, and her significance in the plot has been throwaway at best. But this week? This week we got to see padding scenes from her battle with Kyouka… EVEN THOUGH THAT BATTLE HAD ENDED LAST WEEK. 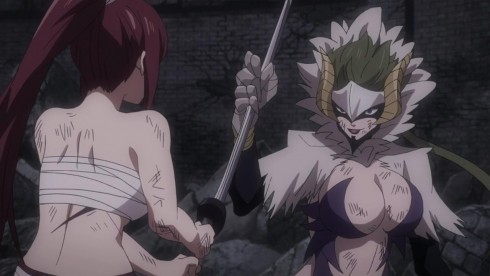 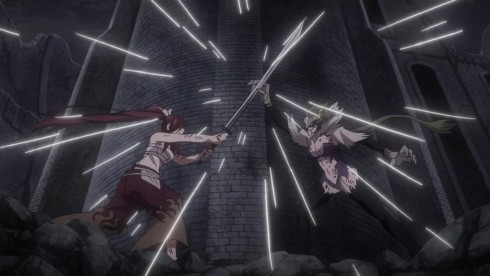 Listen… I’m all for jumping around in time, in service of a story. I was okay with us jumping back to 20 minutes before the counter hit zero, all so we could catch up with Natsu and Mard Geer. Going back 20 minutes does not mean, however, that I’m okay with seeing more scenes from a fight that’s already done and over with.

How, friggin stupid and insulting is that? I mean, it wasn’t as if the animation was even recycled from last week. We got entirely new scenes and new angles, so not only was this entire thing a huge time waste, but animation budget was wasted animating these scenes AND Voicing the dialogue. The head scratching here is strong enough to cause balding. 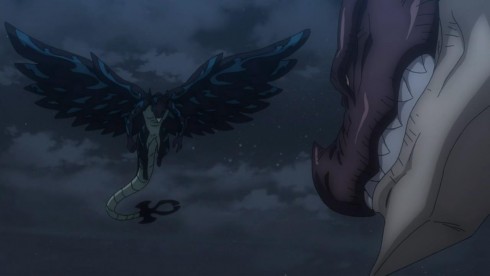 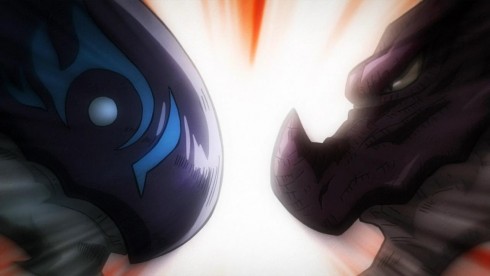 Thankfully, there were a few good moments interspersed in between all the stupidity. We got our first moment of Acnologia actually speaking, and that in itself should be a highlight moment. The conversation he had with Igneel was nothing that we didn’t already know about, but it was cool to see the two dragons exchange words. Why, for the life of me, could we not have gotten more banter between these two?

Why couldn’t we have just gotten Natsu vs Mard Geer for the entire episode, for that matter. If there’s filler that you’re going to inject into the show, why not have it center around the most interesting and pressing matter at hand? Instead we had the good moments of the Mard Geer basically sandwiching and book ending the utterly useless filler moments this week. 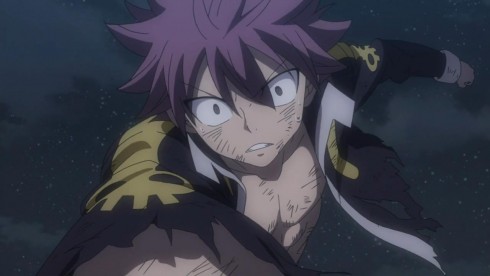 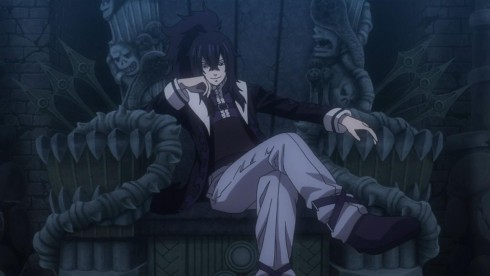 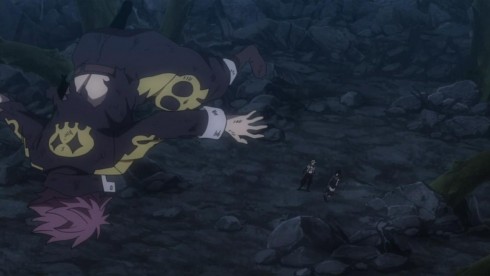 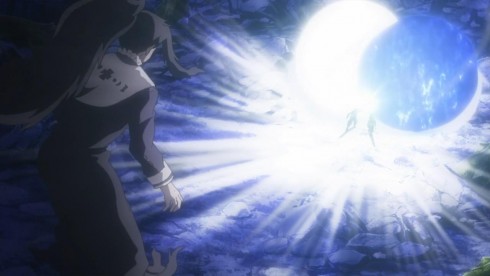 Every time things shifted over to Natsu, things got infinitely better. The whole Sting, Rogue and Natsu combo battle was just jawdroppingly awesome to watch. I’ve harped on the animation before, but there were absolutely no complaints here this week. It was just so darn nice to just stare at the screen, dumbfounded at how cool some of these attacks actually looked like in motion.

But, for every cool moment, we had twice as much useless filler mucking up any momentum or rhythm that the story had going for it. The title of the actual episode “The Girl in the Crystal” happened as the episode closer no less. That’s some One Piece and Toei Animation level of cheapness right there. 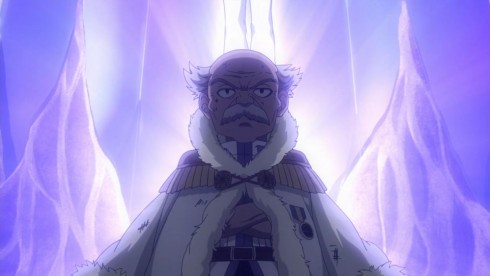 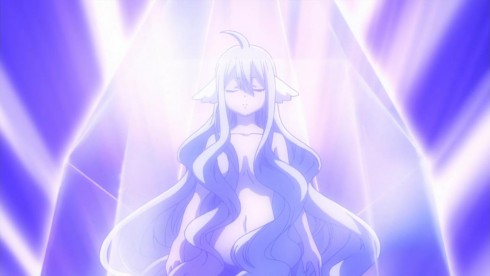 The big episode closer moment was literally Makarov swooping in with Lumen Historie in hand. So Lumne Historie is actually Mavis’ corpse, entombed in some kind of crystal? Alrighty then… Its an interesting reveal, one that I’m doubly curious about, but that Ill have to wait another week (or if we’re being realistic, two) for.

I’ll avoid speculating too much on Mavis, since we’re set to learn her full story in January, when that particular arc (based off a spinoff) gets animated, but needless to say, I’m very curious about what Lumen Historie means, and what Mavis’s story is all about. 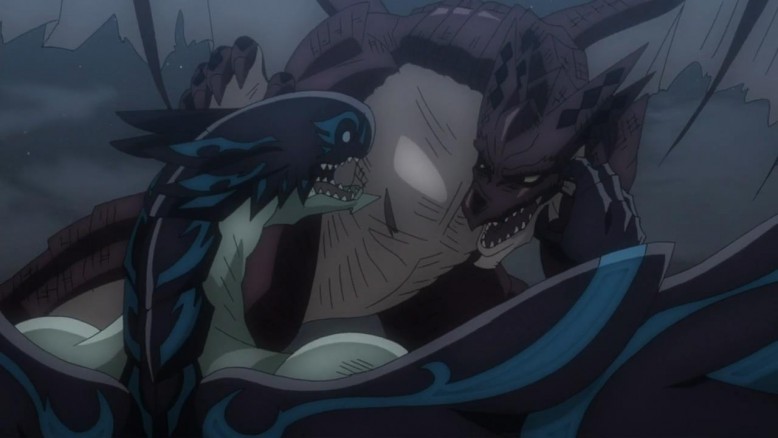 Exhibit A: The Yin…

In the end, I have to say, watching Fairy Tail these days feels like a very “yin and yang” experience. There’s good in there, but there’s equal amounts of bad, and as a fan its sometimes painful to watch. Its painful to see a good, interesting story, stellar characters, and even a talented production fall victim to bad planning.

I honestly would love to just see Fairy Tail cut out all the useless filler, up the pacing to maybe 3 or 4 chapters per episode if needed, and then just give me 5 filler episodes after the end of the Tartaros arc. Its a better alternative to having the actual good story get consistently interrupted and messed up. 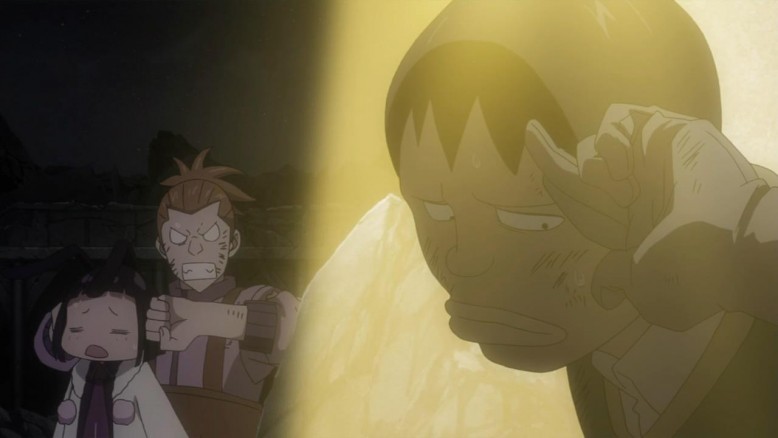 …And Exhibit B: The Yang.

But… As much as I wish and hope for the series to get better, I think its getting fairly obvious that Fairy Tail is just going to be this way until the end of the Tartaros Arc. What a damn shame… Especially given how strongly this arc started, and continued to be until its end. Talk about slipping and falling flat on your face a few yards before the finish line… 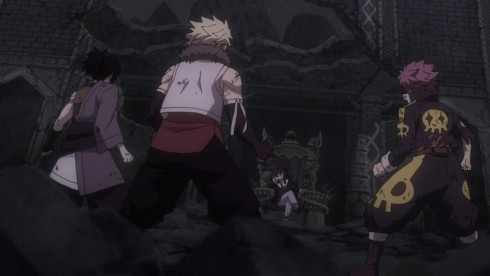 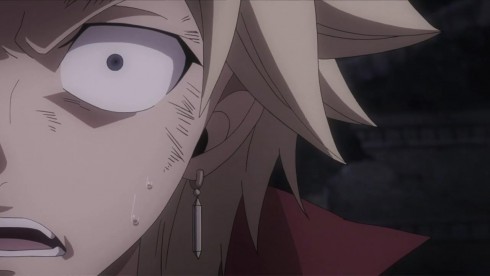 More Mard Geer vs Natsu, Sting and Rogue. But previews can be deceiving… So who knows what we’ll actually get next week.