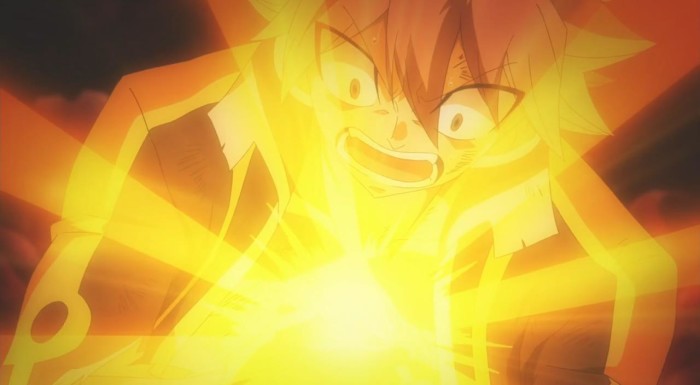 Here we are again. A seminal, phenomenal moment in the story almost ruined by poor adaption choices, needless padding and bad pacing. What’s most frustrating about moments like these is that while it takes us more than half an episode to GET there, the actual reveal itself is just so darn amazing, so mind-mindbogglingly awesome and epic, that it feels like a true travesty to delay it all for so long. 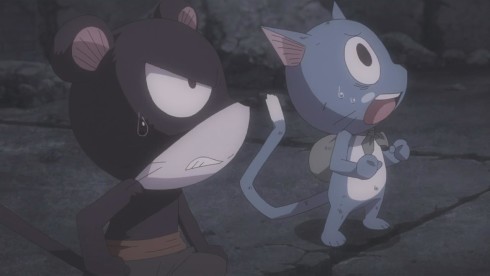 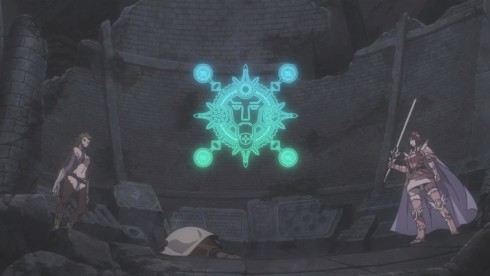 I think its safe to say that Fairy Tail’s second series is having some serious adaption issues, because at some key moments, the anime adaption is clearly getting in the way of story itself. And since the reveal this week was so earth shattering, I think I’ll get my complains out of the way first, as quickly as possible, before we move onto digest all the awesome that just happened.

The big issue I had with this episode, is how it very much felt like it was just stalling for time. We had gotten hints that something big was coming, at the end of last week’s episode. Rather than dive right into it and give us the big reveal, however, the episode opted to check in with all the characters that we clearly didn’t care for, or really need to see at this particular point in time. 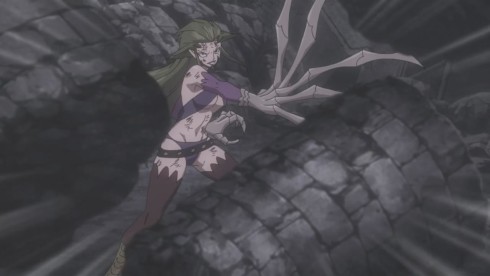 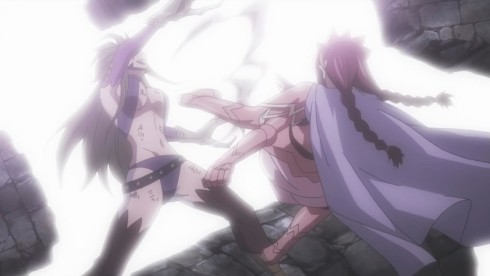 What’s even more perplexing is that I don’t think there was much of a budget save with this move either. We saw a little bit of Erza’s ongoing battle with Kyouka, which from what I could see, wasn’t skimped on for the few moments that we did see it. Things got progressively worse from there, as we more or less got random filler moments, that included more of Lammy.

The whole Lammy subpoint just cheapened not only the episode, but her death at the hands of Jackal a few episodes back. It also threw cold water on the issue of Hell’s core being destroyed. If the Tartaros Demons can just come back whenever the hell they please, absent of any real logic then well…. Yeah, you get the idea. 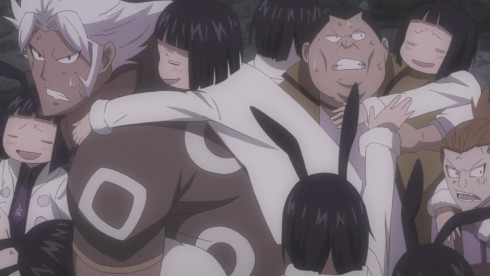 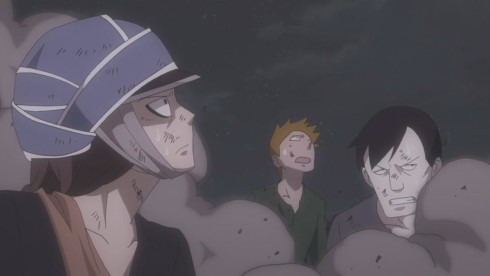 But it got even worse when we actually got into the build up for what was coming next. Look, I can see that the arrival of a certain Dragon was pretty big news, and deeply personal to all of Fairy Tail. I don’t, however, see why we needed to get repeated static shots and closeups of EVERYONE’s horrified faces, and several panning shots for characters that I’m not even sure exist…It all just felt like the Anime Production staff wanted this episode to end at a particular point, come hell or high water. The choice for stretching things out, actually dulled the moment a little bit.

The moment in question, was of course that Acnologia, the Dragon that wiped out an entire Island and trampled on Fairy Tail’s best like ants, was back and roaring to destroy. 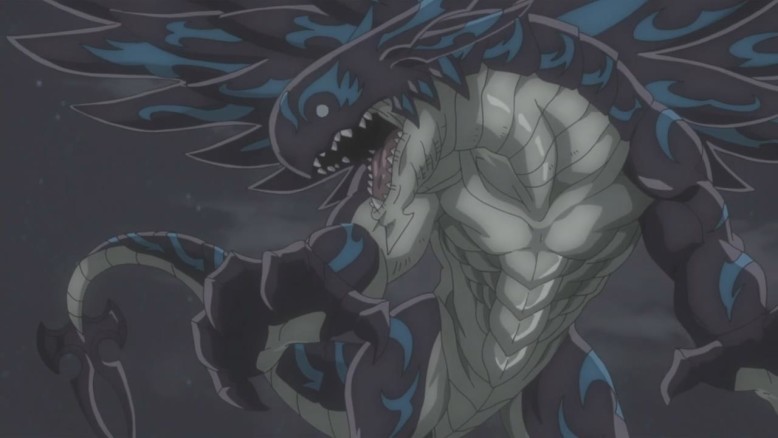 Acnologia… Out in His Sunday best!

Acnologia coming back is a huge deal, because like Zeref, he/it is one of the series big bads. Acnologia is a lot more menacing than say Zeref because the Dragon isn’t kind, friendly, or even communicative. Acnologia acts more like a force of nature, trampling everything in its path, and embodying the very quality of despair. 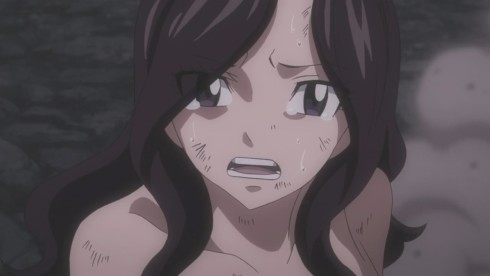 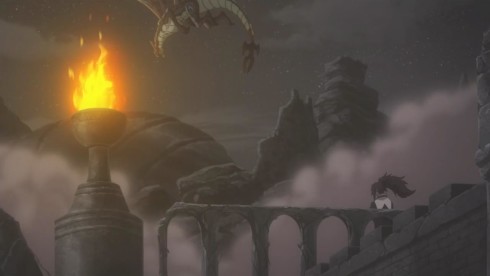 That bit, the bit with Cana as she asked what she and Fairy Tail had done to deserve this, that was good. Its at that point, in the second half of the episode, that things got really darn GREAT.

Acnologia showing definitely meant that things had just gotten real. Everytime Zeref or Acnologia pop up, its clear that the end game for the story, or at least a major turning point, is definitely coming. So bringing in Acnologia this soon? I’d say Mashima-sensei’s pretty much indicating that its “Go Time”. XD 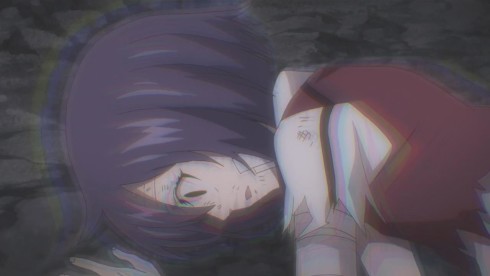 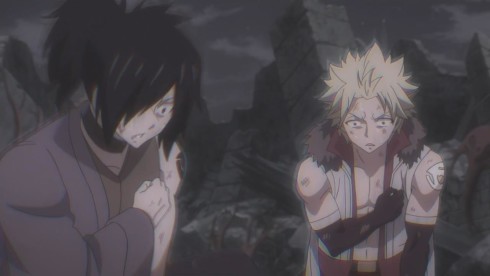 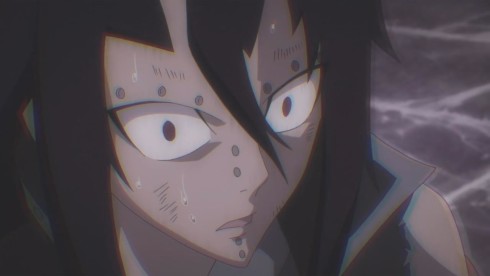 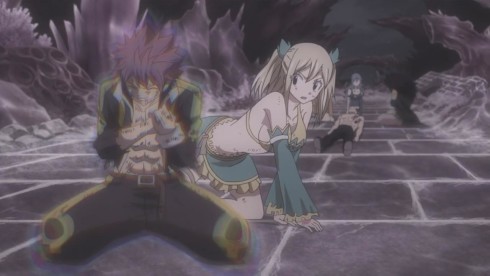 But what I wasn’t prepared for, what I hadn’t expected, even after having the OP kind of spoil SOME things, was what came next. Reacting to Acnologia’s appearance, all the Dragon Slayers in the immediate area start to vibrate and pulsate some weird kind of aura. They also became extremely hot, as Lucy found out first hand when trying to reach for Natsu and see what was up with him.

It wasn’t just Natsu though, because Gajeel, Wendy, Sting and Rogue, all in different locations, immediatly felt not only Acnologia’s prescense, but began feeling pain and exhibiting similar symptoms. 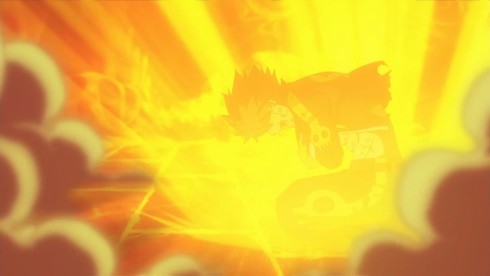 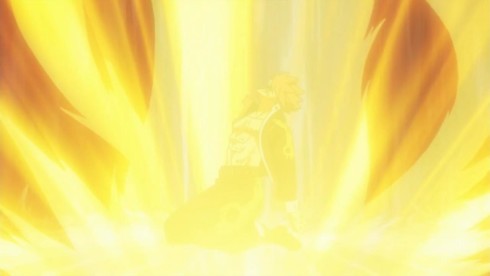 Natsu was special though. Else where, we cut to none other than the King of Fire Dragons and Natsu’s parent Dragon, Igneel. If Acnologia was here, it seems that Igneel very much got the memo, and felt that it was “time” to get moving too.

And then… It happened. As Acnologia arrived at the location of Fairy Tail and Tartaros’s ongoing battle, So too did a blinding, powerful light errupt from within Natsu. Igneel himself emerged from that light, and revealed the big shocking revelation, the big twist: 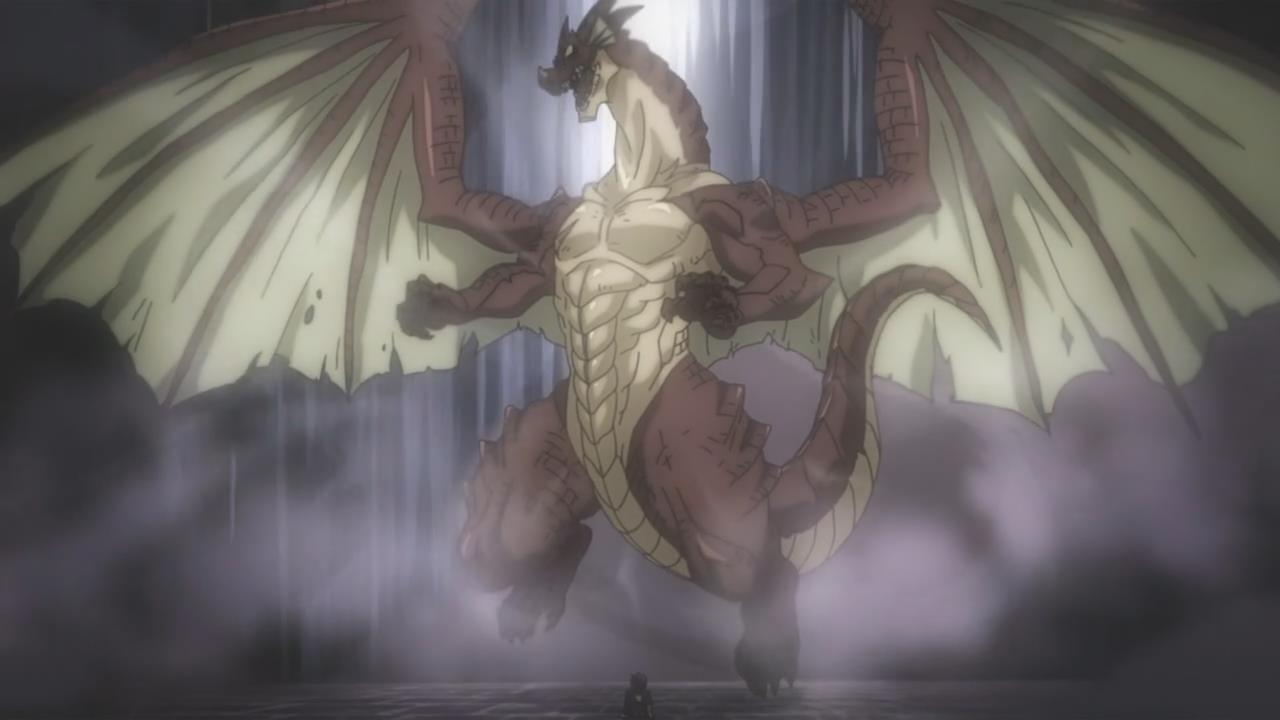 “Natsu, I’ve been inside you all this time!” – Wow… zOMG… WHAT THE?!?!? Yeah, all of that and a lot more. This was something that just completely threw me for a loop. I had always thought that Igneel and the other Dragons were in some remote location, perhaps another dimension, removed from the human world. To find out that they were INSIDE their Dragon Slayer children, all this time… Is just amazing and exceedingly brilliant.

It doesn’t feel like it came out of nowhere either. This reveal just makes so much sense from so many different angles. It makes sense now, why Zeref had such high expectations of Natsu, why he knew of him. It makes sense that Zeref would know of Igneel’s son, and his current host. It also kinda debunks my old theory about Natsu and Zeref being related by blood, but I like this explanation a lot better anyway. 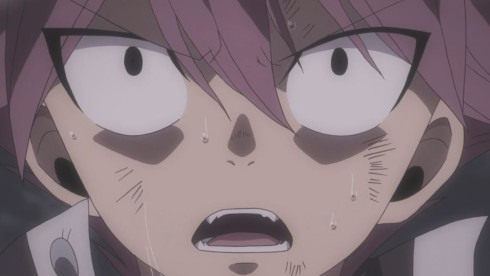 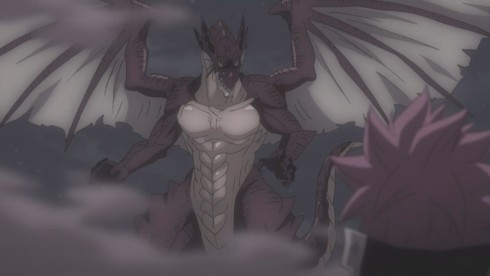 It also makes sense that Natsu would obviously be special, as a result of that, and especially because it seems like Igneel is kind of the unofficial hero of the Fairy Tail world, tussling with END and Acnologia, and protecting everyone in the process.  It also gives us a lot of context into Natsu’s near endless supply of power. If Natsu had the King of friggin Fire Dragons inside of him, it makes sense that his power levels, at key moments, would sky rocket.

But of course, beyond just giving us a better idea of everything that Mashima-sensei’s been slowly been putting in place since the series inception, The reveal of Igneel brought to us, a new set of equally interesting questions. Why Did Igneel and the other Dragons end up residing inside their Dragon Slayer children? Was the reason these Dragons took in the children so they could inhabit them? Was that just something that kind of happened? 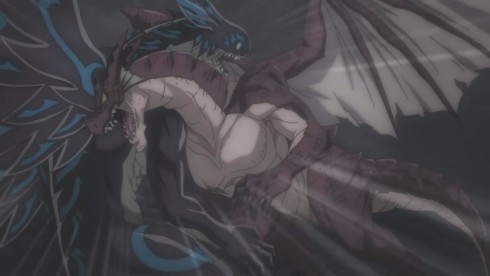 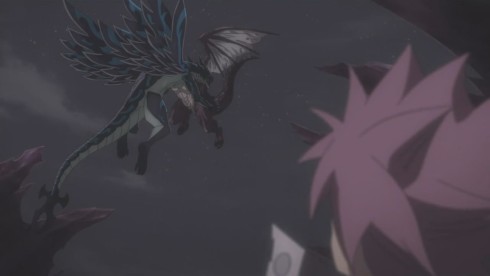 Why is Igneel surfacing now? Why is he the only Dragon to come out? Has Igneel actually being powering Natsu, or has his inhabiting Natsu actually put a strain on him? And why didn’t Igneel and the other Dragons appear during the Tenroujima Incident?

So many questions, so much awesome, and it all pretty much ended with Igneel saying “he’d take care of Acnologia” and leave END to Natsu. 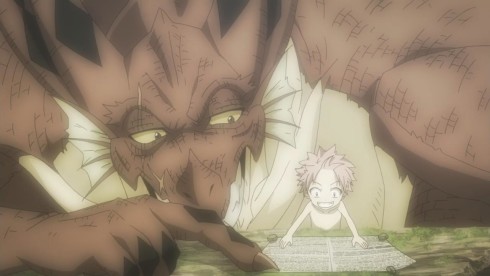 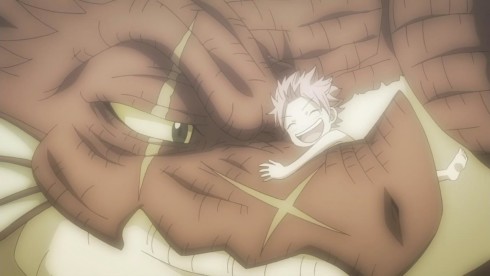 Again, while the reveal itself was spectacular, mind blowing, I wonder why it had to be stretched towards the last few moments of the episode. Couldn’t we have just gotten a longer montage, or a proper flashback to Natsu and Igneel’s early days? Rather than a few quick scenes. They were powerful scenes, but the whole point of the episode was to bring Igneel back into the picture, and bring on Acnologia. I just simply don’t understand why the episode had to feature some much “B-Roll” rather than focus and perhaps expand on the important stuff.

I know Fairy Tail’s done it before, the whole battle with Laxus was a completely anime original moment. The only logical explanation that I can come up with is that if Fairy Tail adopted a more focused approach, then certain characters and therefore voice actors, wouldn’t have lines. Its a question and issue that I see time and time again. There are just times when certain characters, speak, or say things, that make no sense from a narrative stand point, and feel really shoehorned in. Seiyuu being the force that they are in Japan, I wouldn’t be surprised if this all does have something to do with giving everyone some screen time. 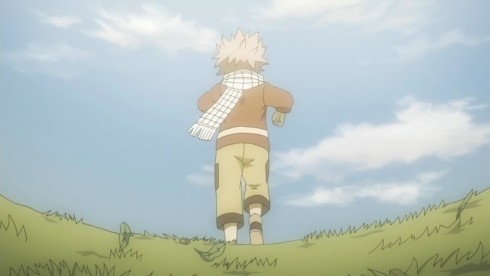 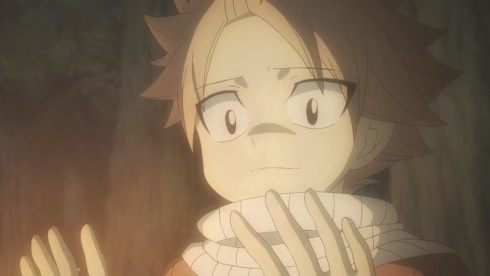 Regardless of the pacing issues, the important point is that Acnologia and Igneel are upon us. Things have been kicked so far up to eleven, that this almost feels like one of the story’s final chapters. The stakes are high, and the outcome of this battle will redefine the Fairy Tail universe, and have lasting consequences. It not only feels that way, but it simply is, because of the players involved in the present situation.

And Natsu, I’ve glossed over how big of a deal this whole reveal is for him. Natsu’s been searching for Igneel since he was a little boy, and has long wondered if Igneel abandoned him, if he died, or what exactly the whole deal was. I can’t even imagine the wealth of emotions that he’s experiencing right now, seeing his father in the flesh, and learning that said Father had been with him all this time. 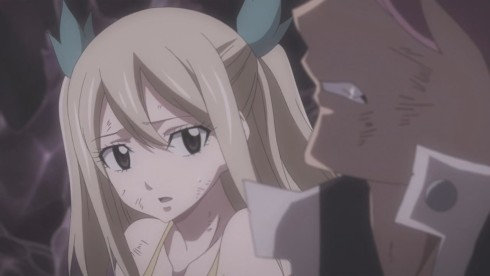 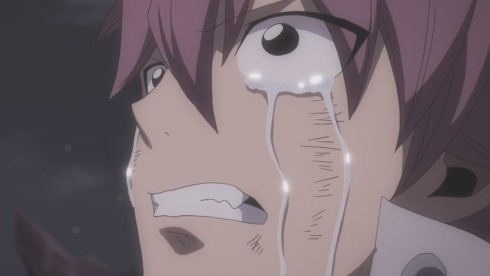 I think Natsu often gets the shaft in terms of character development or emotional moments, but they do exist, and are pretty powerful when they come forward. I think the last seminal moment for Natsu was his battle with Gildarts on Tenroujima. That moment was personal, powerful and it gave us new insight into who Natsu was and is. I feel like after all this time, and seeing all the other characters have their own defining moment, its time for Natsu himself to take center stage as a character, rather than just the hero that saves the day.

Adaption issues aside, this was an important moment for Fairy Tail, and one that I think will get its proper due next week. Its unfortunate that the anime episode itself was such a misstep that I’d be tempted to rate it as a C Grade or lower, but… Once again, the actual story was just so darn good that it easily hit the A- range (and could arguably even be higher). 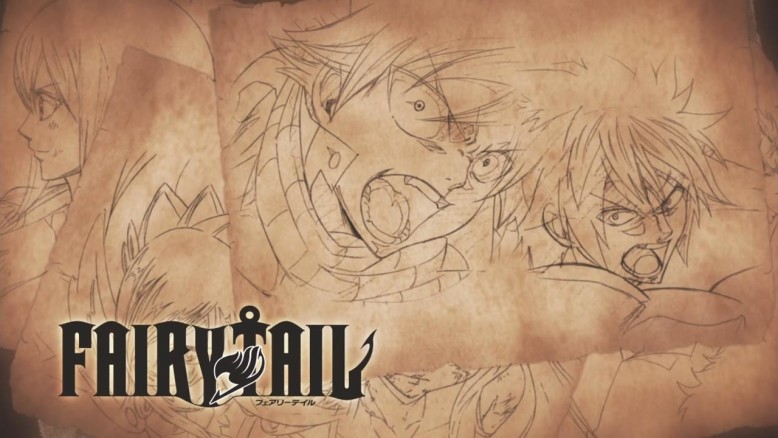 All that aside… I’ve said it before, and I’ll say it again. Its a great time be a fan of this show, as the good and the great just keeps on coming. 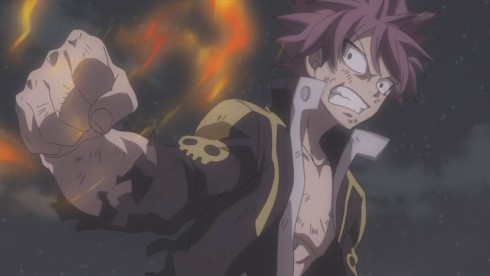 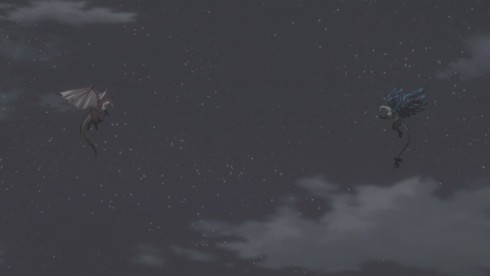 Igneel vs Acnologia? Natsu vs Mard Geer? Maan… Why do we have to wait another WEEK for all of this?