One of the criticisms I have heard levelled at the anime adaptation of the Gakkou Gurashi manga is that it spends too much time fooling around with “standard cute high school girls doing cute things slice of life shenanigans” – especially in contrast with the content of the source material. And while I could see where such criticisms could come from I was generally okay with what the studio has been doing – after all, this is a different art medium and I feel that part of the purpose of it is to give an “easy entrance” into the source material and the franchise as a whole. However, this is the first episode where I feel these criticisms are valid. Even if on a larger scale it could be “justified” by saying that the series is going to plunge into a dark and heavy final arc and the studio felt it needed to come up for air before diving deep to collect the pearls … well … I feel that too much time was frankly wasted in playing around and being silly in this episode. 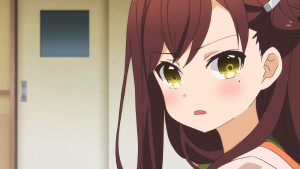 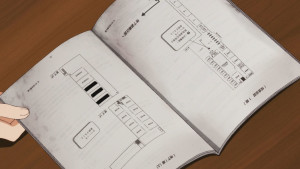 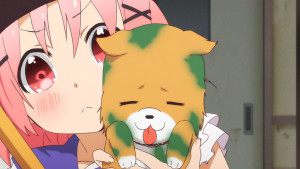 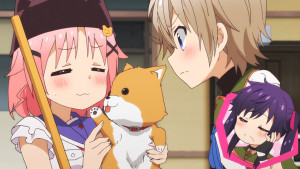 However, in no way does that mean that the episode as a whole was “useless” – there were many good things in it. One of the more interesting snippets centered around more thoughts and ramifications of the information unearthed at the end of last episode about the biochemical weapons and the school being designed as a sort of possible “fall-out shelter” in worst case scenarios. We receive information that there is a sort of “second basement” and the hints are strong that it is precisely there where the current zombified form of Megu-nee is lurking about. It seems Megu-nee head there after being wounded and started writing in the hopes that the girls would eventually make their way down there (emergency supplies may be stashed away in all those file cabinet drawers lining the walls). 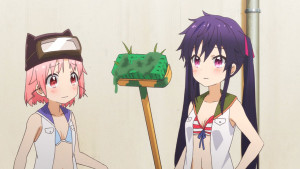 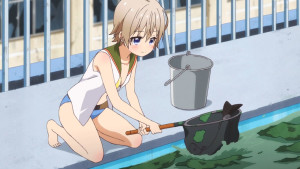 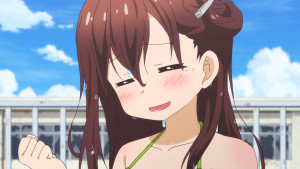 We also get bits and pieces of information about the school itself – mostly through Yuri, who apparently knows quite a bit about on-site facilities that were used directly or indirectly by the gardening club she was part of. Aside from the huge array of solar panels there is also a water purifier on the roof (an excellent precaution in my opinion) and even a small fish farm! It is in the “pond” where the fish farm is located that Taroumaru made his way and got filthy both last episode and at the beginning of this one, and the cleaning of which much of this episode is dedicated – effectively turning much of the content of the episode into a “swimsuit/at the pool ep”. Well … hopefully that element of the story worked better for other viewers than it did for me. 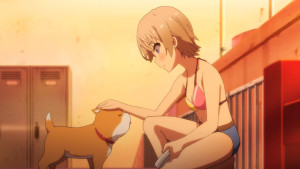 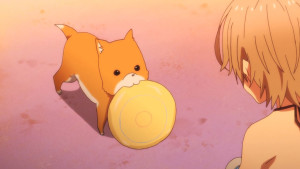 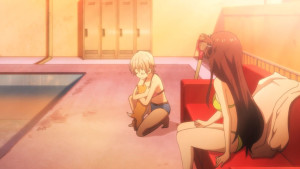 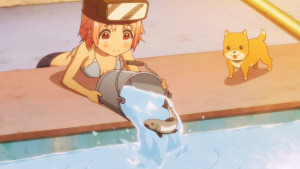 Just as the episode began with references to the underground basement so too it ended on the same. Taroumaru (once again) squirmed his way out of his collar in the middle of the night to go for an evening romp and howl at the moon a bit, and apparently followed some far away noises down to some kind of entrance quite a distance away (I was not sure if it was beyond the desk and chair blockade or not, but I assume it was). Beyond it he gets frightened and begins growling at the approach of a shambling figure that is unmistakably Megu-nee’s zombie (to dim strains of calliope music no less, which I thought was frankly kinda creepy – nice touch by the studio). Both Taroumaru regularly escaping from his collar and the repeated screen appearances of the zombified Megu-nee definitely portent some dark content to come, in my opinion. 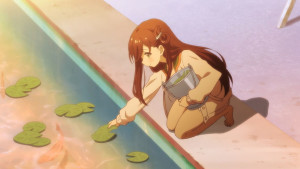 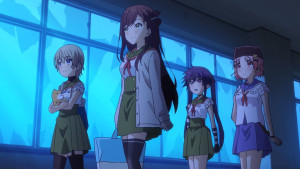 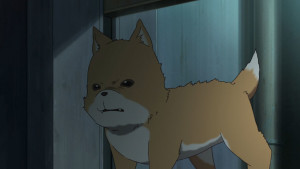 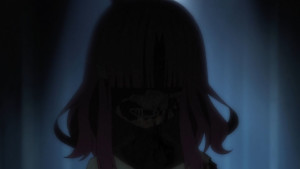 If all that were not enough, we also get teeny hints from the ED sequence once again … a large part of it shows Taroumaru by himself – the girls are not with him, and also the disturbing absence of Kurumi from the very last seconds. Thus far the OP and ED sequences have been pretty reliable in terms of foreshadowings. Many have been fearful that Taroumaru’s death has been in the cards from the get go, and the “reconciliation” between he and Miki in this episode is (while touching and nice and all) regarded as a death flag. There are also the disturbing words Kurumi uttered a few episodes ago right before they rescued Miki from the mall – asking Yuri to kill her if she ever became a zombie. Yes indeed … things are definitely not looking like they are going to be sprouting up roses and lovely pretties. My expectations are rising! XD

Once again, a shout out to Takii at random c dot net for the screenshots – am way too lazy these days.