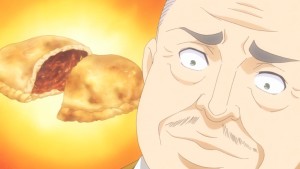 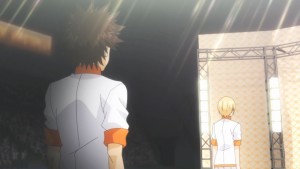 That settles it, Shokugeki no Soma is at its best when it doesn’t have to pander to its weaker characters. In contrast to last week’s offering of B-tier characters, this week had the B Group Preliminaries totally dominate with awesome character after awesome character. I think its almost important to have experienced last week’s disappointment in order to truly appreciate the satisfying “flavor” of this week’s episode that was both varied and extremely potent. 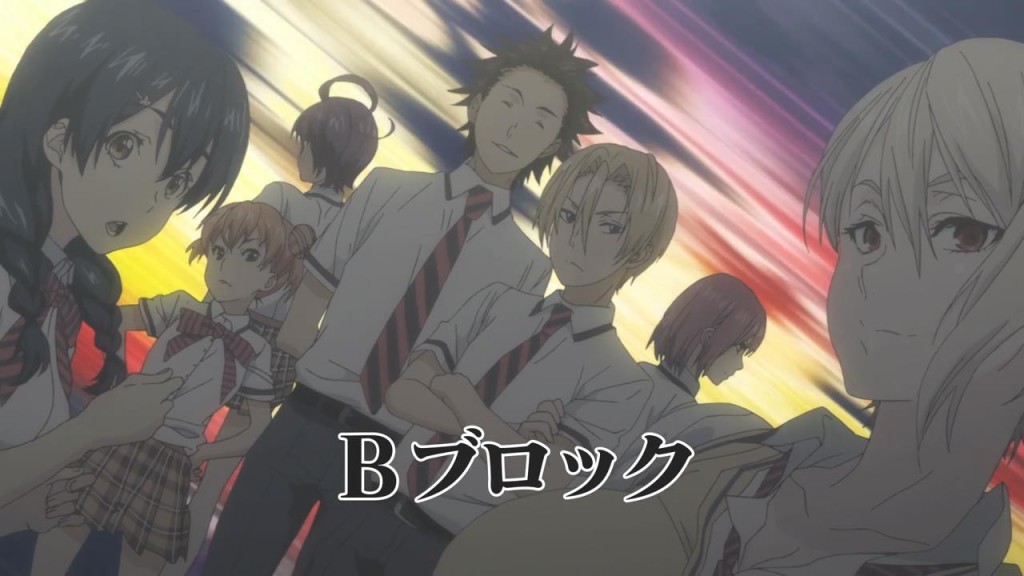 What’s perhaps a bit surprising, is the fact that we pretty much wrapped up the entirety of the B-Group prelims in this episode, a stark contrast to how little we saw last week. I keep mentioning last week, because this week just fixed every issue I had with the show this week while simultaneously bringing forward the good bits.

The first thing I really liked was how tense and close the competition really was. Certain characters would reach the top, then get knocked down, then another dish would appear that would knock THAT character’s ranking down. It was all really well done, and really highlighted the excitement that is often found in competitive cooking shows. Beyond the exciting judging and results, however, certain characters had their own personal battles conclude this week. 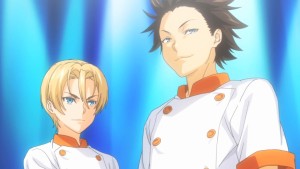 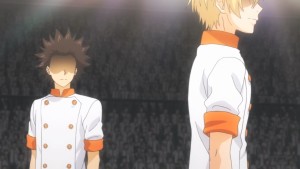 The highlight of those, was definitely the competition between the two Aldini brothers. Takumi has always been the brother to stand out more, and it seems the toll that took on his younger brother was a lot more than we had originally been led to believe. Isami’s actually always been inferior to his older brother, and living in his shadow. It seems that extends beyond just cooking and even in terms of the love and affection he received from his parents. Takumi was obviously the favorite due to his superior talent but what’s interesting is the kind of relationship that he has with his younger brother.

Despite a clearly competitive barrier between the two, There’s a clear bond and friendship with these two brothers. Its that bond and friendship that pushes them both to grow and mature, in other words its the best kind of rivalry. It also makes Isami’s reasons for being at Totsuki unique, as seems to be a growing pattern that we find with most of the best characters in this show. Much like how Soma’s ultimate goal is to surpass his father, for Isami its to surpass his own brother and stay alongside him, competiting and growing with him. 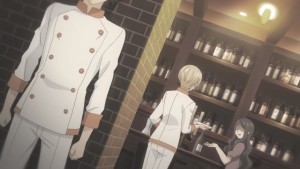 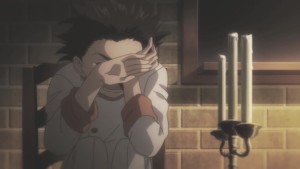 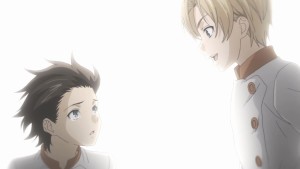 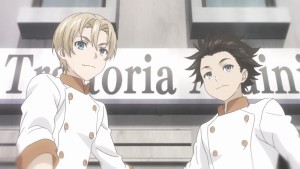 Its a fascinating relationship, one that highlights the best aspects of a relationship between two brothers close in age. As for the actual dishes, I’d say that they were both… interesting. In contrast to last week, I’m more or less over the fact that we’ve veered away from actual curry and are now just looking at things that have a passing resemblance to curry.

In that sense, Isami’s Curry Calzone and the curry Napolitan were pretty cool to see. I personally found myself liking Isami’s Calzone from description alone, but in terms of raw taste. There’s just something odd about having Curry with a pasta that has cheese and spices inside it. I can’t attest to which one actually tastes better, because they’re both just so… Out there, that I’d have to try them to be sure. In my eyes, both dishes are equally weird and seem equally interesting enough. Having said that, the story needed Isami to lose here, and that’s what we more or less got. 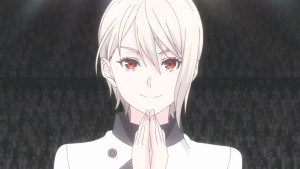 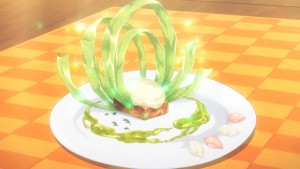 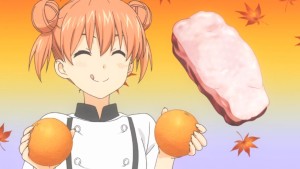 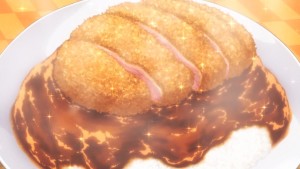 The two outliers in this competition, the ones that didn’t really have a personal beef with anyone, where definitely Alice and Yuki. There’s a serious contrast here, however, in that Yuki was always destined to never make it past the prelims while Alice was going to dominate them regardless. I think it was smart to have their segments be noteworthy, but go by fairly quickly. Yuki is great, and talented, and her love for ingredients and people is a real asset, but she’s not as good as some of the crazier people in the running.

Alice on the other hand, uses science and chemistry in such bizzare ways to make something so out there that it might as well be considered art. I think I liked Alice’s weird Green dish the least, because it honestly did seem like something that: A. Is seriously impractical and B. May not even be possible. I do like Alice’s unique angle, using cutting edge science to create extremely unique and high value gourmet dishes but… In terms of practicality she leaves something to be desired. 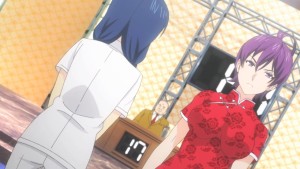 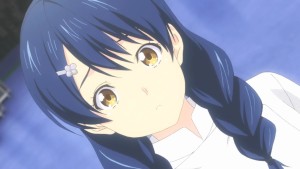 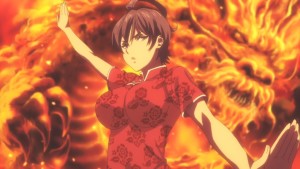 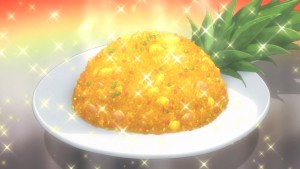 Book ending all the other competitors though, were Hojo and Megumi, and that pairing couldn’t have been more fitting. I had suspected that Hojo and Megumi were opposites in some way, and that we’d see them go head to head in the prelims but even I didn’t except their battle to be so philosophical in nature. Hojo and Megumi are both really talented, but they’re very much different in the same way yin is to yang.

Hojo actually started us off in the episode, using her chinese curry rice pineapple dish to secure the second spot for a while. It was a nice way to start off the exciting results that proceeded, and by the near end of it, we had Hojo and Isami tied for fourth place. It was then, as the final contestant, that Megumi made her appearance. 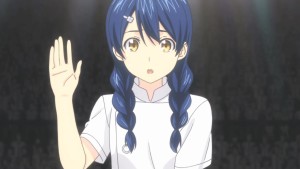 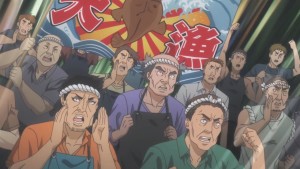 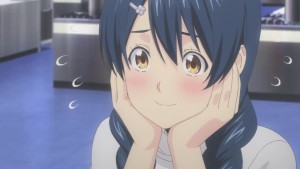 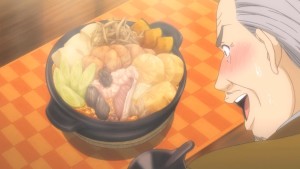 If you recall, last week it was Megumi’s segment that completely stole the show, and this week was no different. Picking up from where we left off when we last saw her, Megumi’s charater arc was equally heartwarming and satisfying to see unfold. While last week had been all about her childhood, this week highlighted the pains and problems Megumi faced when she arrived from her hometown to Totsuki.

We learned some really interesting things about Megumi too. For one thing, much like Soma, her end goal in life is to help at HER family’s restaurant. What’s also so darn interesting is that much like Soma, Megumi was totally fine where she was, and it was due to her mother that she ended up going to Totsuki to broaden her horizons. Much unlike Soma, however, Megumi’s experience at Totsuki wasn’t as smooth or exciting as Soma’s rise to fame, but rather a gradual painful climb that was equally devastating and sad. 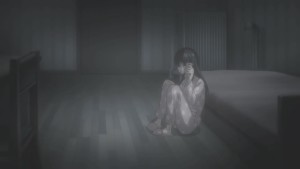 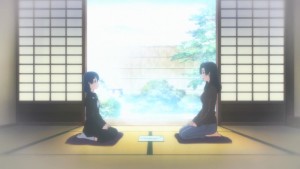 But its because Megumi is able to rise above it all, using the things that make her such a unique character and chef, that her entire dish dominating the mindshare of the episode. Much like how I cheered for Soma back when he was in a serious pinch in the Summer Camp, I couldn’t help but cheer for Megumi. If there was one character I really wanted to succeed, it was Megumi. She’s just so nice, likable, and hardworking that its hard NOT to root for her.

Added to that, what we really got is a markedly different take from Megumi’s approach to cooking and life to that of Hojo’s. While Hojo hates the men that surround her, and wants to defeat and dominate them, Megumi’s the nice girl that just wins everyone and creates a happy and friendly environment. And by the end of the episode, after we see Megumi’s dish, that’s filled with the love of her hometown and those that she grew up with, its clear who the winner is. 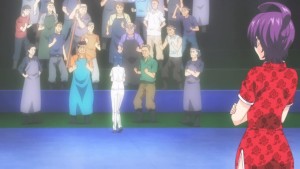 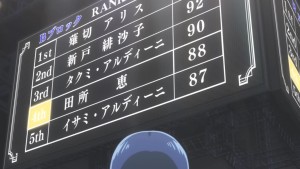 Megumi barely edges in to the top four with 88 points, beating both Isami and Hojo who were tied at 87.  Our final group from the B-Block is none other than Alice, Hisako, Takumi and Megumi. That’s a pretty awesome result, and it feels right.

Now, with the last two episodes, I’m assuming we’ll get to see Soma and the rest of A-Block throw down. The setup after the credits is pretty interesting in that the actual judging in Soma’s block isn’t all that friendly, exciting or interesting. Its quiet, tense and extremely cold, as the older Sendawara sister, Natsume continues to dish out zero after zero. None of our actual important characters have been judged yet though, so its anyone’s game to see who ends up winning. 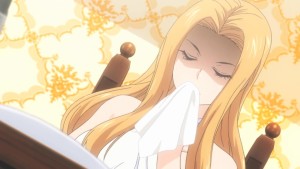 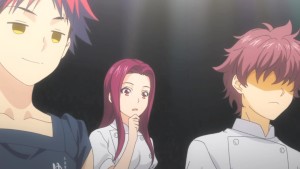 All in all, I’d say the B-Block part of these prelims were pretty darn good. While there was a bit of a low point with Hisako’s bit, everything else was really really interesting. And now, all the wait is over, as we’re now arriving at the main course. 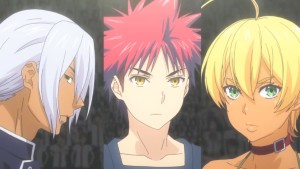 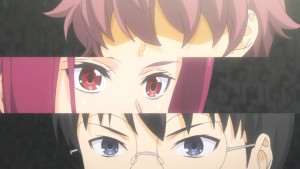 The A Block part of the competition begins in earnest next week. 2 More episodes left!