With this hard-hitting episode the “Miki introduction flashback arc” comes to a close, and for me it was very effectively done indeed. Part of me still feels a bit puzzled as to why the studio decided to introduce the series with her already present and then bring in her mini arc afterwards, but it does not feel terribly out of place and it was executed nicely, so no complaints – perhaps it was a storytelling method that will become clearer at the end of the series? One where they would be able to satisfactorily include enough information that would finish up in one season? Nothing to do but (eagerly in my case) wait and see what they will be able to do from hereon out – I must admit that I am curious to see where the series will be taken from here…. 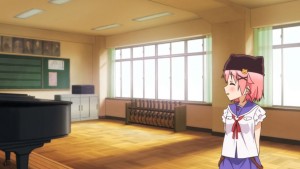 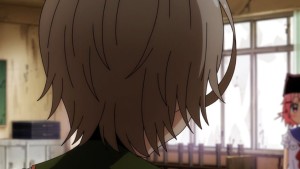 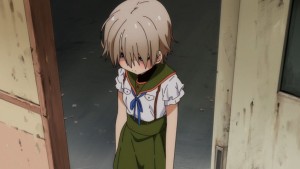 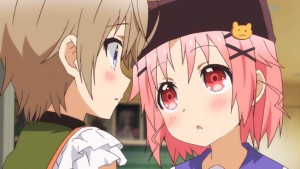 The episode began with Miki waking up and realizing she was in a school. After a few foggy seconds she is greeted by a Yuki talking with Megu-nee, and we finally are shown absolutely and clearly that Megu-nee is definitely a figment of Yuki’s imagination, just like we were shown how this was so with the classroom and students via Miki in episode 1. However, this is the first time Miki has been exposed to this, and she is understandably disoriented, yes, but also, perhaps a little frightened. We are shown a few minutes after this scene that Yuki’s state of delusion will go to the extent of letting things drop on the floor without her realizing it. If for a few seconds Miki had thought that perhaps the whole zombie apocalypse thing was all a bad dream she is quickly convinced otherwise. 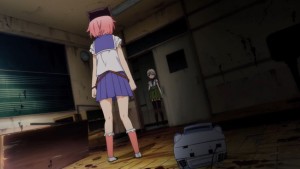 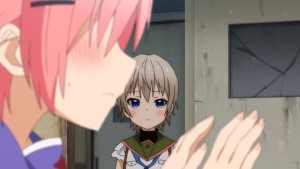 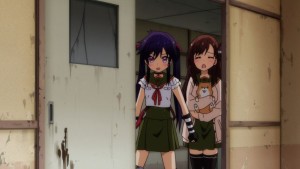 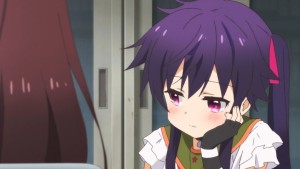 After observing Yuki “conversing” with Megu-nee for a bit she is suddenly invited to be shown around the school, and their first stop is the Music Room. The scene is the  music room was absolutely, completely heart breaking for me. We are again shown a stark contrast between what Yuki is imagining and what is actually present – for some reason the broken music player scene was especially poignant – and we also have Miki actually pop the question: “Who is this Megu-nee that you keep talking to?” Yuki’s response is positively painful – with pained, almost frantic yet tearful eyes she says something like: “I know she has very little presence, but please recognize her, okay? Please?” Miki is at a loss once again, but fortunately Kurumi and Yuri arrive right then to explain things a little. 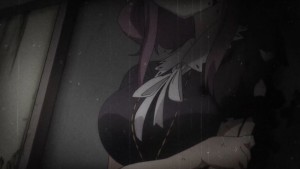 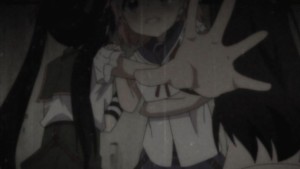 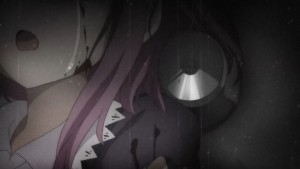 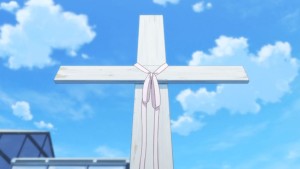 From here we are finally given the reveal that many suspected and of which we were given a teeny glimpse at the end of last week’s episode. It seems Megu-nee is indeed dead (or zombified) – she sacrificed herself to save the three of them during a zombie attack, presumably after she had been injured already (possibly even bitten?) and when it happened Yuki was beyond distraught … and it proved to push her over the edge so much that she blocked it and even the entire zombie apocalypse (!) out of her mind. In fact, the cross in the garden plot on the roof that we were shown in the first episode for a brief second was Megu-nee’s grave, while the white ribbon around it was her’s as well. After narrating what happened, and explaining why Yuki is the way she is, Yuri and Kurumi then surprise Miki by asking her to also go along with Yuki for the moment – something Miki reluctantly agrees to for the moment. 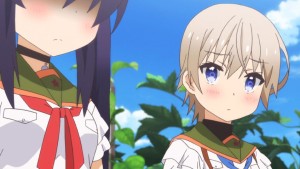 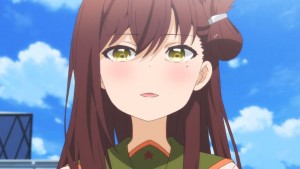 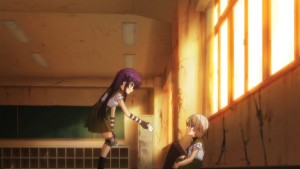 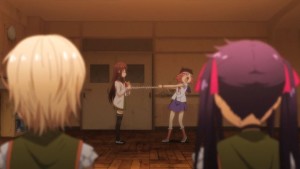 Shortly after this Yuki decides (out of the blue) that they should all have a “Sports Festival” to welcome the new student, and it is with this festival that Miki begins to see what Yuki (even if subconsciously) brings to the group – something that was emphasized in episode 4 with Kei’s parting words: and that is that she brings an element of “living” in the midst of the hellish, heavy, despair-laced environment that they all find themselves in. Miki, being a bit more of a pragmatic, practical sort, was able to sit still and wait things out indefinitely, it appears, but Kei was not. In a similar way, we are shown that Yuki brings an element of vivacity, cheerfulness and … well … living to the group as a whole, and that this helps them all keep their sanity. Perhaps one might say that Miki sees that Yuki is trying her best in her own way as well? 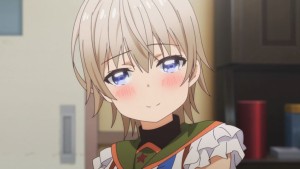 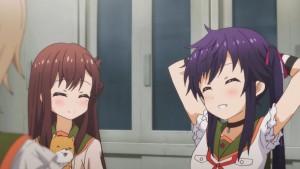 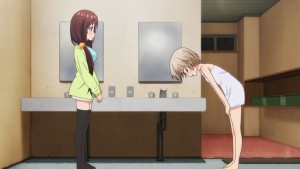 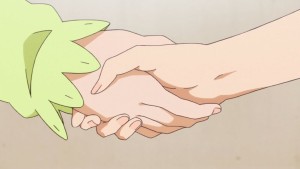 One of the things I have found most interesting regarding the series in other anime sites on the internet (blogging, forums, etc.) is the discussion it has raised – Yuki’s existence in particular has pricked the default utilitarian way of appraising things that is in many people, who regard her presence as useless, dangerous, and a drain and weight on the normal members of the group – and some have even said she would be the first one sacrificed if the occasion arose. Of course, there has been a large amount of resistance to such an approach as well, but I was glad for this episode being able to address such things. I wonder if that were one of the intents of the author as well?

Another question that has arisen is whether or no allowing Yuki to continue as she is is really right? In some ways I think this is a question without a good answer in this situation. They are, after all, just high school girls in a horrible situation themselves – they are not trained and experienced in years of psychological counseling or whatever. And beyond that the whole zombie apocalypse setting itself is highly fictional to begin with. It seems to me that the series might be making a case that caring for someone who would be regarded as “damaged goods” like Yuki is at the moment has its own rewards in the short and the long run. It is helping them to keep their humanity, I’d even say, to “live” in the words of Kei – and best of all, Yuki “gives back”, and helps bring an element to their lives that they have difficulty generating themselves.