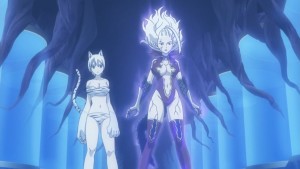 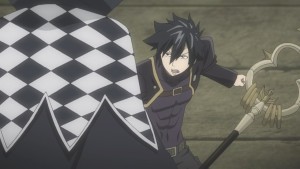 Time sure moves fast in Fairy Tail. Like… really fast, which is of note because of Anime’s and shounen’s typical penchant for slowing things down to a crawl. This week’s episode truly felt like we were on the fast track as things sped up to the critical moment. Face’s activation is the big plot device to raise the stakes in this arc, but it seems like the whole battle over face isn’t going to be the end all be all of the story but rather just a turning point. 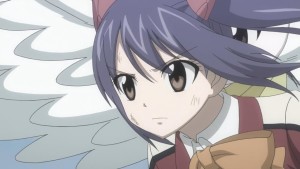 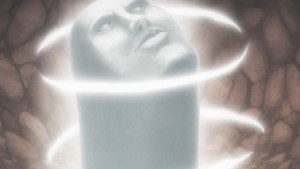 If this was a typical shounen battle manga story, then the entire story would revolve around Face, and the good guys would barely scrape a win and stop it near the end. The way things are going, however, just in terms of time, Face’s activation will or won’t happen soon, probably within an episode or two. At the end of last week’s episode, we had 31 minutes left, and this week while the battles were happening and we breezed through the episode, that time went down to 9 minutes!

There’s battles happening all around the Tartaros cube, but this week and the next are totally Wendy’s show. Wendy’s the youngest and arguably the weakest Dragon Slayer that Fairy Tail’s got. Despite that, however, we’ve had some serious growth for the girl as the arcs have gone on. From her introduction, right up till the Grand Magic Games, where became a serious force to be reckoned with, Wendy’s been building up to the moment at the end of the episode. 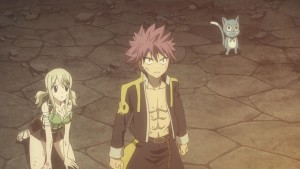 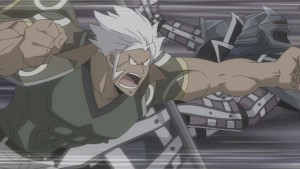 Its worth mentioning how well thought out Tartaros’s plan is, in that all the major players in Fairy Tail are occupied with fighting them, and the fate of all the mages on the continent is pretty much on a little girl and her exceed cat. Well, its more or less on Wendy at this point, because Carla pretty much exhausted herself to get Wendy to the cave where Face resides.

And its in the cave where Face is located, that Wendy runs into Ezel,  the four armed turquoise brute that looks like a weird Goro knockoff (from Mortal Kombat). Unlike Goro though, Ezel’s got some serious magic power, and as is expected, despite Wendy’s brave efforts, he completely wipes the floor with her. Its obvious that Wendy can’t defeat a member of Tartaros by herself, and I’ve been long wondering how she was going to do anything, and how Face was going to be stopped, if at all. 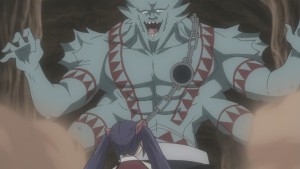 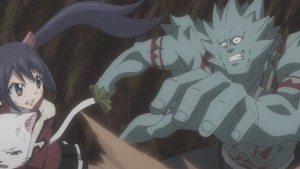 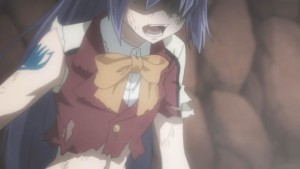 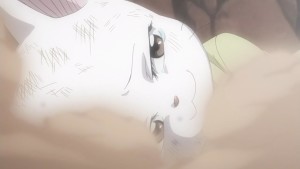 What I didn’t know, mostly because of my own stupidity, was that the OP had long since spoiled the big moment at the end of this episode. Much like how Natsu used Etherion to unleash Dragon Force, Wendy gets her own shining moment and extreme powerup with Face’s Ethananos particles (Yes Ethernanos particles, just roll with it… ). I’d be lying if I didn’t say I LOVED the moment where Wendy went all Dragon Force Badass.

And I’m doubly happy about the fact that it came as a surprise for me. Yes the OP spoiled it, but I simply didn’t put two and two together at the time. Given that Wendy has pink hair when she’s in Dragon Force, I thought we were looking at Meldy in the OP, not Wendy. Yes, I realize that there’s also the HUGE glowing Fairy Tail mark on Wendy when she’s shown in the OP, but well, I didn’t catch it. The surprise and excitement, therefore, were exceedingly genuine when it did happen. I NOW get how the OP had a huge spoiler in it. It pays to be a Baka sometimes! XD 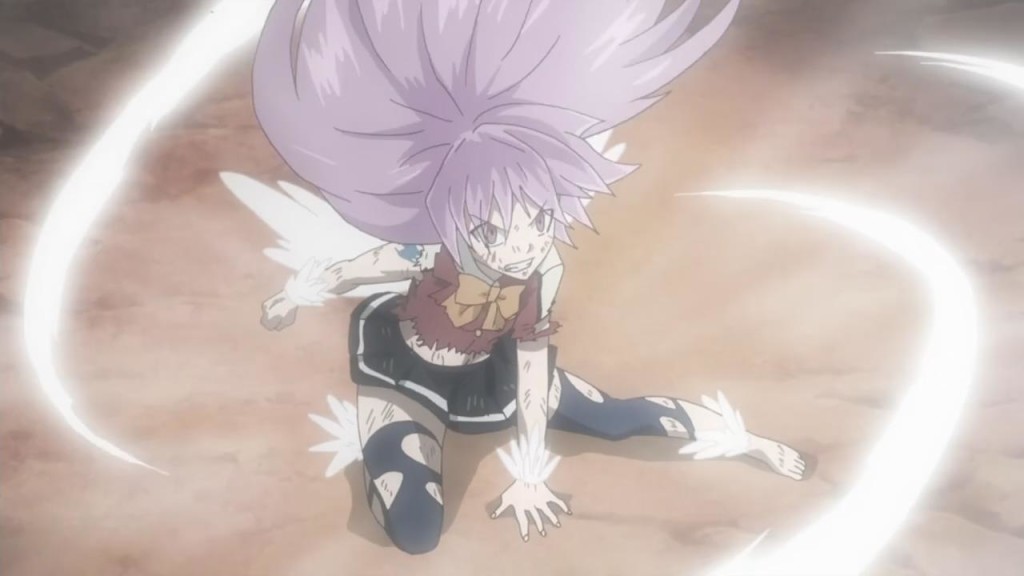 Wendy in Dragonforce is the highlight of the episode, and the title moment for sure. It’ll fall on next week to see her wreck havock with her new power level. This week it served as just the big cliffhanger moment to cap the episode. So what was the rest of the episode about? It was a lot of jumping around and seeing all the other pieces on the board get setup.

Natsu, Lucy and Happy end up seeing Franmalth’s latest soul, and as expected, it turns out to be Hades/Purehito. I was a bit taken a back by how the cool moment devolved into comedy, and it did feel a bit off base. Franmalth brought up an interesting point too, Natsu hasn’t taken on Purehito himself before. This isn’t an easy battle for him, but man… How can you take it all seriously when Franmalth looks the way he does? Its just so absurdly silly. 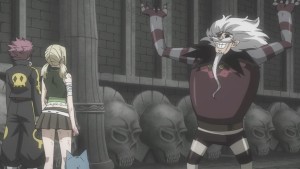 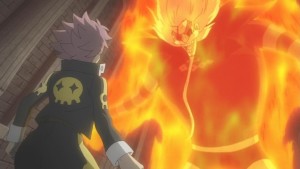 I honestly would’ve loved to see Purehito’s original appearance with the black eyes, and that would’ve made this whole moment cooler. The threat is still there, as it seems Franmalth can simply absorb other’s powers themselves, rather than just souls. Natsu’s lighting fire dragon mode out and has been taken after all. It’ll be an uphill battle for sure, and will keep Natsu mostly occupied until Face gets activated (or doesn’t).

Meanwhile, it seems like Gray is being positioned for a face down with Silver, even if right now he’s still trapped by Keyes. The interesting comment that Keyes is a lot like Juvia is a bit of nice foreshadowing, but nothing else really happened on this front. Lisanna and Mirajane, on the other hand, are taking on Seliah, and there’s a bit of traction there. Erza and Kyouka are still battling on the outside of the cube, and that’s still ongoing. The rest of Fairy Tail is handling random NPCs XD in an effort to find the particles for a cure for Laxus. So there’s a lot of little back and forth, and we pretty much check up on everyone this week. 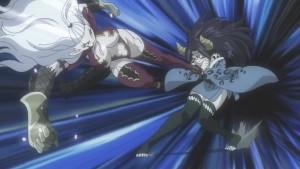 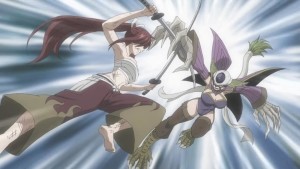 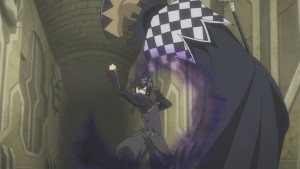 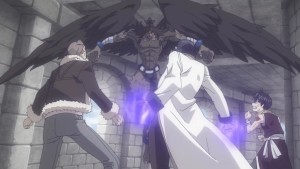 What’s surprising though, is how much this jumping around just… Works. If you recall, I HATED this jumping around stuff in the Grand Magic Games arc, but I quite like it here. What’s going on? Well… I think there’s a clear emphasis and focus. Multiple things are happening concurrently for sure, but the focus is solely on Wendy, and her big moment. That gives the story a focal point, and keeps things riveting and interesting. The jumping around and multiple perspectives add to the urgency of the situation, and highlight how much of a big deal Wendy’s role is in everything.

Lucy puts it best in the episode, with Fairy Tail locked in an all out war with Tartaros, they’re in a horrible situation should Face go off. Given that Fairy Tail is barely able to take on Tartaros with their powers as is, should they lose them it’d be a complete slaughter. If Wendy fails, its over and done. The fact that all these various changes in perspective serve to highlight this reality, is the little detail that makes it all work and ties it together beautifully. 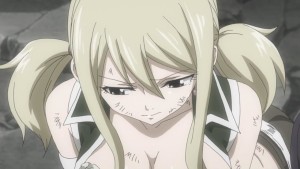 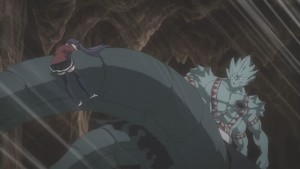 To put it another way, the change in perspective doesn’t feel like just a cheap stalling tactic, but rather an organic element of the story. That and the fact that the timer seems to ticking down at an alarming rate keeps things very much in the up and up. By the end of the episode, we’re a few minutes away from Face activating, and Wendy gets her Dragon Force on just in time.

And to top it off, I honestly have no idea where things are going to go from here. I’m not sure if Wendy can even stop Face, despite her upgrade, and where the story will go once we get over the whole Face situation. It seems like we’re at the turning point in the story, and once Wendy’s role is done, things won’t remain the same, regardless of the outcome. 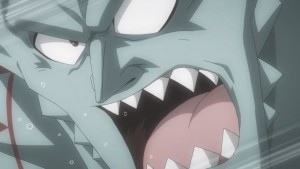 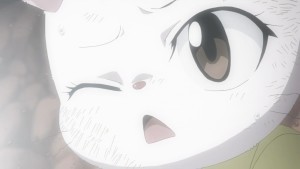 Don’t watch the preview if you want to be completely unspoiled. There’s some pretty massive spoilers here this week too. I guess Fairy Tail’s Production staff are bad at holding back with spoilers… XD