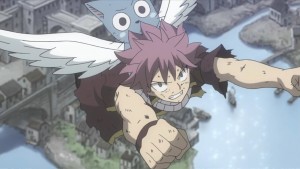 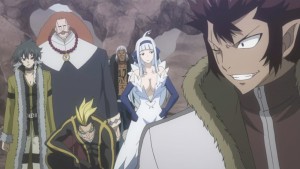 And then there’s episodes like this…. After two uneven episodes, Fairy Tail is back to kicking into high gear again. I’m honestly not sure what to say at this point, except that I’d want more of what we got this week, all the time. 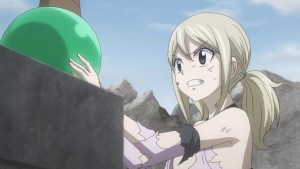 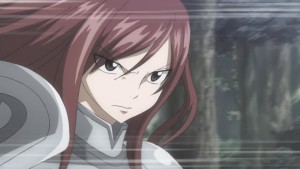 This week had everything that’s made the Tartaros arc such a joy to behold. There was the lightning fast pacing, the twists and turns, the slowly unraveling mystery and the badass character moments. Its like the last two weeks didn’t happen at all, which is just… odd.

It seems we’re also into the second phase of the story, as the prologue is now a thing of the past. With that progression, Tartaros’s little plan starts to reveal itself. There’s some big revelations this episode and it seems that Tartaros has its evil hands in a lot of terrifying places. 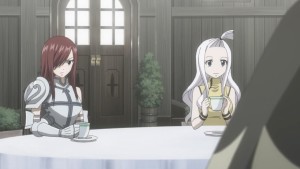 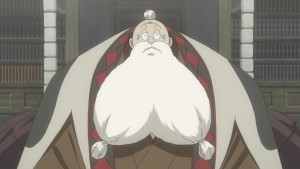 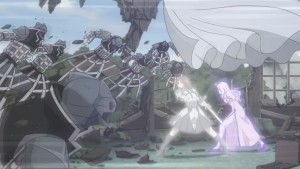 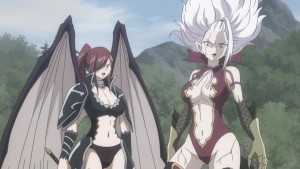 Last week ended with Erza and Mirajane heading to the former Council Chairman’s place, and if you were lucky enough to NOT get spoiled by that horrible preview, then you’d be surprised to find out that the former Chairman of the Magic Council is very much in league with Tartaros.

It was common knowledge that the Magic Council had its problems, but when the former Chairman himself is ready to sell out everyone for the sake of power, then things are just rotten to the core. 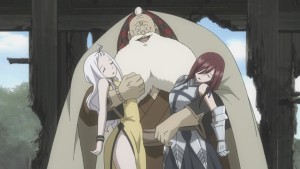 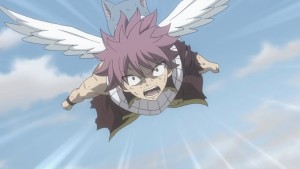 Unfortunately for them, neither Erza nor Mirajane realize what’s going on in time, and its actually NATSU that puts it all together first. For all the characterization that Natsu seems to get as a brash, brawns over brains character, Its kinda awesome to see him be the first to piece it together.

It makes a lot of sense too, so much so that I’m surprised that someone like Makarov didn’t piece it together himself. If Tartaros knows enough to be able to both assassinate the current Magic Council and find previous council members, then they’ve clearly got an inside man. And the only inside man that makes any sense, who would have all that information, has to be the previous Magic Council Chairman.

Its quite the pickle that Fairy Tail find themselves in now, as not only is the Magic Council gone but the older instituition’s corruption is attacking them too. Added to that, of course, is just how friggin powerful Tartaros itself is.

And speaking of bad situations, lest we forget, Erza and Mirajane, some of Fairy Tail’s strongest, have been captured. Mirajane seems to be undergoing the same demon transformation that Minerva was going through a couple of episodes back. And Erza? Well she’s being tortured pretty brutally, both mentally and physically. 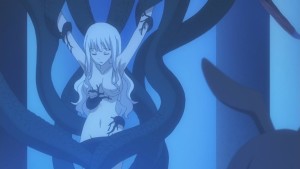 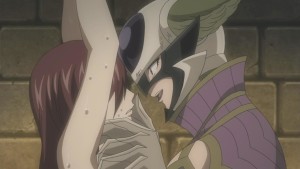 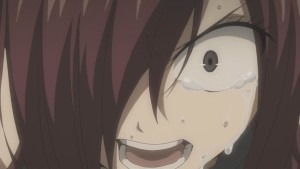 I’m sure the scene in the anime is censored, but it was still tough to watch. It makes sense that, in a world where magic exists, there’d be a power to amplify pain and pain thresholds. Its a pretty grim scene, seeing even the mighty Erza begging and pleading by the end of it all.

And Erza’s not the only either. Picking up from last week, Elfman ends up being reduced to begging for Lisanna’s life too. Man, Fairy Tail really is getting owned all over the place isn’t it? And unlike previous arcs, this isn’t something like being beaten up gloriously, but rather being tortured and whittled down from their core. This is dark stuff, and its uneasy to watch. 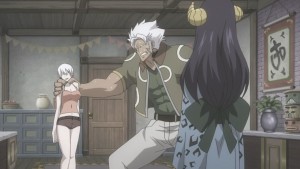 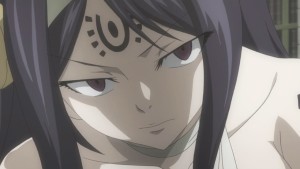 Dark stuff it is, but I wouldn’t call it unfitting, or offensive. Fairy Tail has long since needed a foe that could hurt them on such a personal level, exposing their weaknesses as much as their strengths. Just as much as Fairy Tail’s bonds are its strength, they seem to be used very much against them as their weakness too.

All the major downfalls this arc have been because of someone trying to protect their comrades and friends. It happened first with Laxus, then Elfman and now Erza. You’d wonder why Erza isn’t just taken out of the picture entirely? And the reason is Jellal. 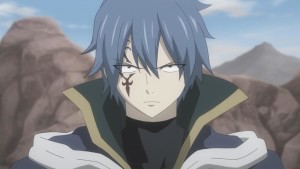 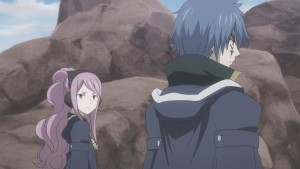 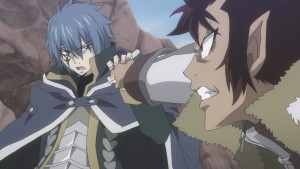 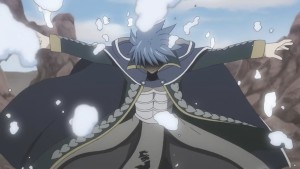 If you’ve read a decent amount of my Fairy Tail blog, then you know that I’m a big fan of Jellal, so seeing him return was pretty cool. And boy does Jellal return with a bang.

With Doranbalt forced to trade information for Oracion Seis’s freedom, he ends up playing a rather dispicable card, namely have Jellal repay his debt to him here and now. So that’s exactly what Jellal does, and he decides that he’ll take on the entire Oracion Seis himself. 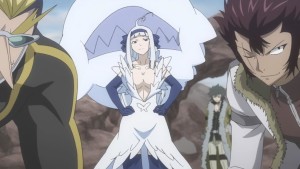 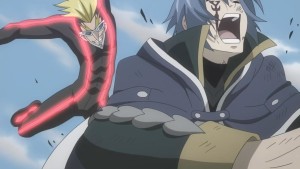 That’s a pretty badass way to start, and it ends up working to Jellal’s favor at first. He’s able to take on all of them at once pretty easily, and well, given this is the guy that Natsu had to eat Etherion to beat, that’s not surprising. Of course, in the end, even Jellal can’t actually take on an entire Dark Guild himself, and starts getting beat down.

It remains to be seen if Meldy will end up stepping in or helping him out, but I personally will put my money on Jellal winning. Of course, there is the chance of Jellal losing and dieing. As it turns out, he’s the last life that’s the key to unleashing Face. That alone makes sense as to why Jellal wasn’t allowed to die in arcs previous, and why he HAS to continue to live, despite whatever he may want regarding the matter. 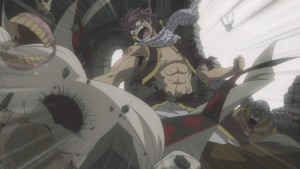 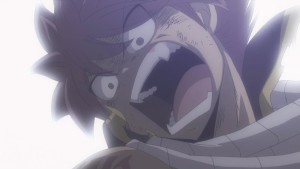 That’s a nice and pretty sweet twist but… In classic Tartaros Arc fashion, something happens that one ups soon after, in the same episode at that. What we end on, is in fact, Natsu crashing right into the Tartaros headquarters. For anyone who thought that the next few episodes would be Natsu and co running around, trying to find Tartaros, while Erza kept getting tortured were proven wrong in an instant (and by anyone, I mean myself).

Wow. No rest for the wicked huh? I’m not sure if Natsu rushing into the heart of Tartaros alone was the best plan, but damn if it didn’t look cool. It is pretty reckless though, and I mentioned that Natsu’s penchant for being reckless is going to do him in eventually, so I can see this being that instant. 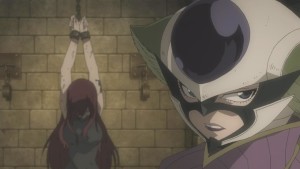 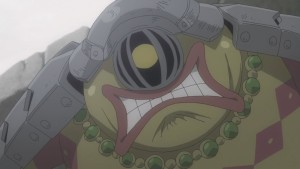 Exciting stuff for sure. What’s truly wonderful about this episode is how none of those odd adaption issues crept up at all. The animation was pretty decent, the flow was great, and everything was just super engaging. This was another episode of Fairy Tail that just fired on all cylinders. I guess I’ll just have to count each win as it comes, and hope that there’s as little losses as possible on the adaption front. 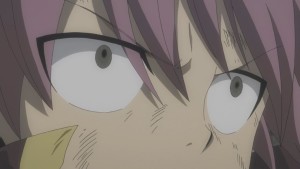 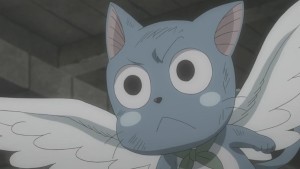 Again, Don’t watch that Preview. Just don’t. While not as bad as last week’s, there’s still quite a bit of spoilery stuff in there. Just enjoy it all in the next episode. See you in 7 days!