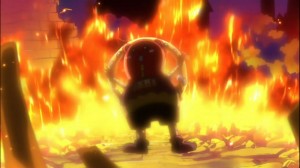 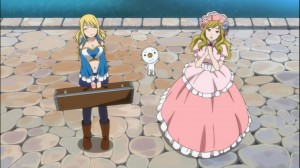 Fairy Tail’s foray into filler territory begins with this week’s solid and somewhat quiet episode. Until this point, Fairy Tail’s filler episodes have ranged from “pretty darn good” to “so horrible I’m embarrassed to watch it”. While this episode is definitely skewed towards the former rather than the latter, it definitely doesn’t feel as exciting or epic as anything that the series has thrown at us so far (based on the manga).

Its easy to notice that if the animation team, and more so the script writers for the series have one thing down, its the signature humor of the series. Littered throughout probably ever other scene, its a nice offset to the somewhat darker tone that the episode is kind of setting in the background.While the introduction of the new supporting character was definitely filled with signature Fairy Tail fun and humor, there was definitely darker undertones happening in the back. 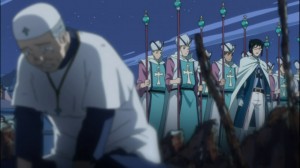 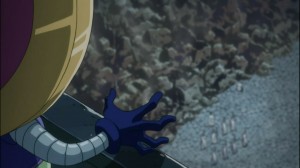 From the looks of it, a mechanical teddy bear like thing is going around incinerating churches, and it seems to only be targeting churches around parishes. Interesting to note, that our new character, Michelle Lobster, seems to have lost her family in around that region. While I’m sure there’s will be some link established at this point, I’m not exactly sure where I peg our dear old Marie in terms of her actual role in the events, my gut kind of makes me think that she’s actually directly involved in the bomb attacks on those churches. Cliche’ Anime tradition dictates that the random new character who has a troubled past and seems nice and super clumsy is actually an evil villain with a serious vendetta. 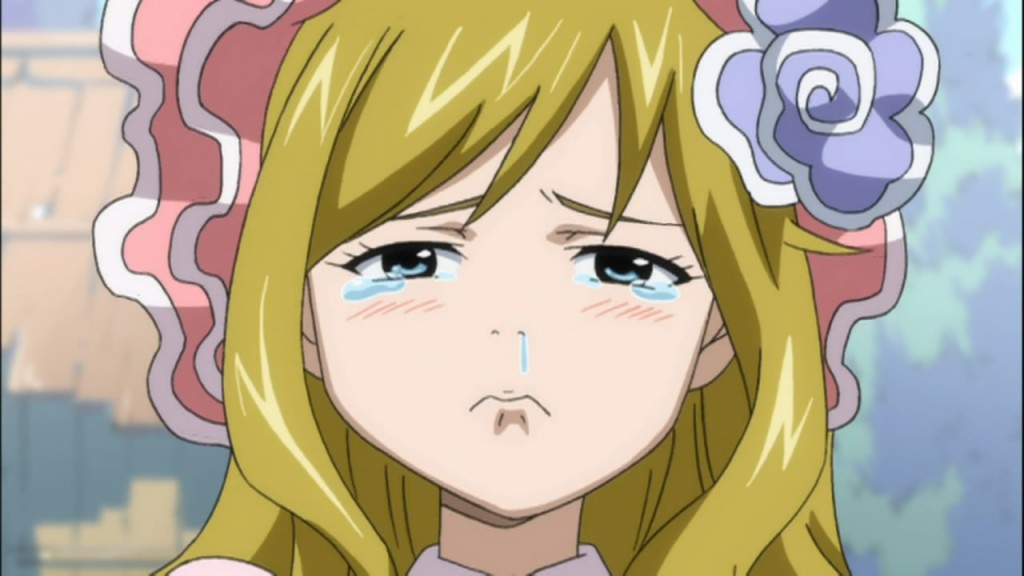 My name is Michelle Lobster! ;_;

In terms of plot though, Michelle is a friend and relative of Lucy and her father. Not only that, that giant key was a memento left to Lucy by her father. She also seems to only own one dress, and forgets to eat for days at times XD

On that note, what kind of name is Michelle Lobster? Lobster? Really? I’m all for English sounding names, but LOBSTER? XD 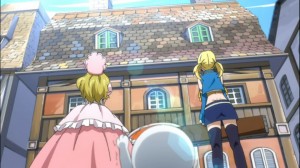 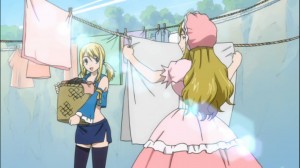 It definitely feels like Lobster was thrown in there, without even remotely thinking about how ridiculous it sounded. “Michelle Lobster!” sounds like a cartoon character from a children’s program.  The fact that she’s kind of ditzy and clumsy doesn’t help matters.

In essence, this episode really just featured Ms.Lobster’s (yes, that’s what I’m calling her from now on… XD) introduction and subsequent integration into Lucy’s life. I will admit that I find the concept of Lucy trying to act like an older sister kind of intriguing, and the writers seem to agree as we got some good hilarity from Lucy’s usual fanservice antics during the bandit scene: 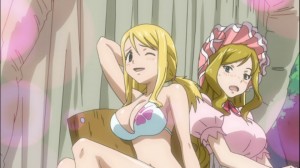 Also, while I’ve been generally supportive of the funny-ness of Lucy’s fan service antics, and then it kind of blowing up in her face, the whole plan in the bandit event cross the border from ‘sketchy” to downright “stupid”. I don’t care who you are, you wouldn’t just strip to your swimsuit when you’re about to be robbed. That’s just asking for worse things to happen. If I were a bandit, and I saw a woman randomly strip into her swimsuit and make suggestive poses, I’d smell the fishyness of the situation a mile away. 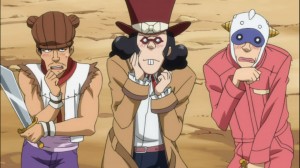 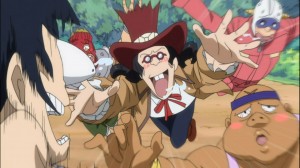 Although, in Lucy’s case, her appeal wasn’t really going to be used, since all the bandits wanted to be women more than anything, and would much rather direct their attention to Gray XD 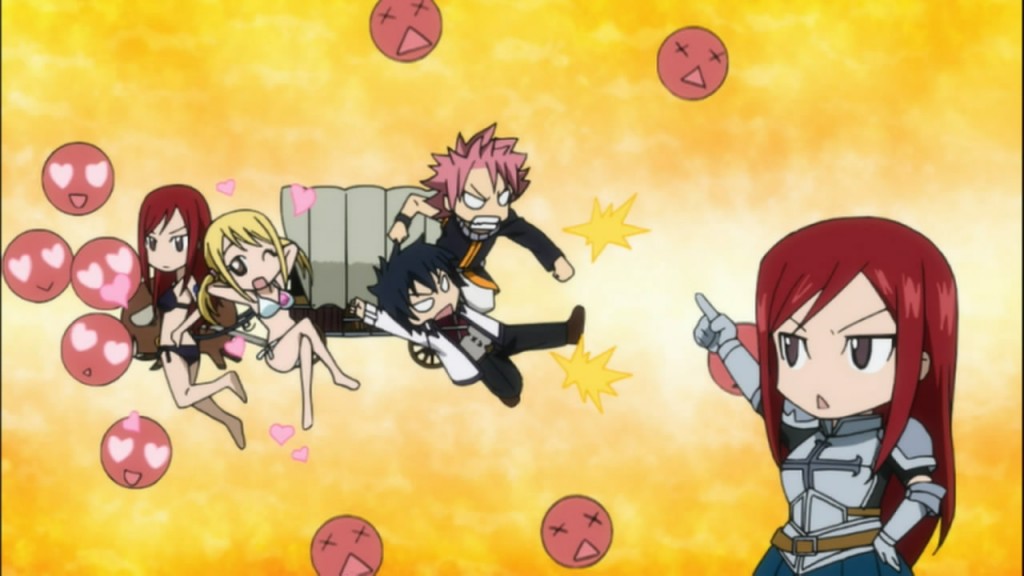 Also, Erza, if you actually spent the entire night thinking up that plan… then just… Wow. I just… really have lost some respect for your intelligence there XD.

That odd bandit job aside, we got our real plot movement in the last few minutes of the episode. I have to say, I REALLY was happy to see Bisca and Alzack’s daughter hanging around Makarov. The guy legit seemed like a grand pa, and it was pretty darn cute seeing the little girl enjoying herself on her head. 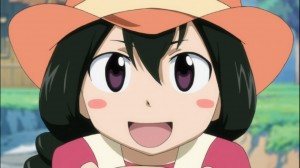 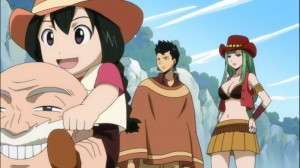 It’s also nice consistency wise, because I was really curious as to why we didn’t see said daughter when we first had that 7 year gap. If you’re going to mention a character like that, you’ve got to show her at some point. Nice little filler nugget there for fans of side characters. Also, love how her name is Asca (Alzack + Bisca)

And yes, I’ll go right out there and say it. It hardly seems like coincidence that it was Ms.Lobster that suggested that Lucy have the guild investigate that huge ass key, and then go as far as to drop it and randomly have it activate. I kept expecting to see her face change expression in the last scene where there was a significant closeup on her. 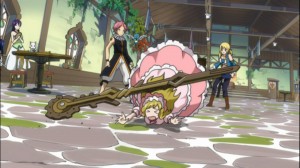 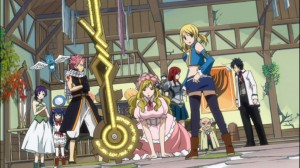 All in all, I’m interested to see where the story goes from here. Its definitely a decent start, and it remains to be seen if this filler arc can hold our attention and distract us from the fact that we aren’t getting the glorious manga adaption content. 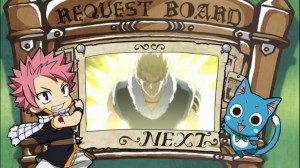 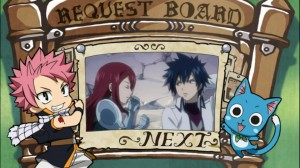 Haven’t had these in a while. Here ya guys are, some Lucy goodness: