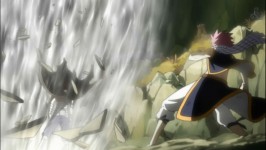 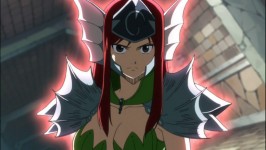 We’re one episode short of the 100th mark, and now we have a brand new spanking OP and ED set for the new arc. There’s also one of the best moments in Fairy Tail to come out in a while, with some serious character development for Natsu. We also get some rather unexpected pairings. The Fairy Tail S Class Advancement Arc has gone above and beyond and we’re only 3 episodes into it!

Diving right into the episode, I was surprised to see it open up with Juvia and Lisanna taking on Erza. Wow, seems like Juvia also drew the short straw as far as battles go. It was pretty awesome seeing that Lisanna could actually fight. She may have been out of comission for two years, but she definitely got stronger. It was kind of disturbing seeing Erza refuse to hold back and continue pound on both Juvia and Lisanna. As disturbing as it was, I think its something Juvia needed. Juvia needs to be put into prespective and get her drive to become stronger. Juvia seems to lack motivation at everything that isn’t related to Gray, and Erza pounding some sense into her is definitely what she needs. This S Class Advancement exam is about more than just choosing an S Class wizard from what I can see. In many ways the S Class wizards are raising the best and brightest of their guild for the challenges that will come their way  in the future. 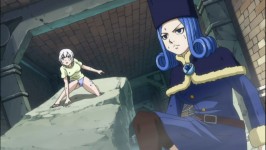 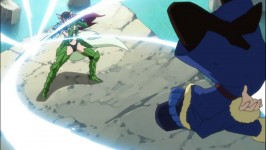 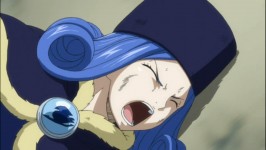 A lot of the S Class candidates are pretty strong as is, no question about it. What they really need is the maturity, experience and mental growth to be able to proceed to the next level. Either way, I can see Erza refusing to pull any punches, and I’m not sure if Juvia will make it past the first part of the exam. From what I gather from the OP, things will get a lot more serious and the exam  will kind of be put on the back burner. In many ways, these battles are the final preparation for an upcoming battle that none of the Mages know they’re going to be facing. 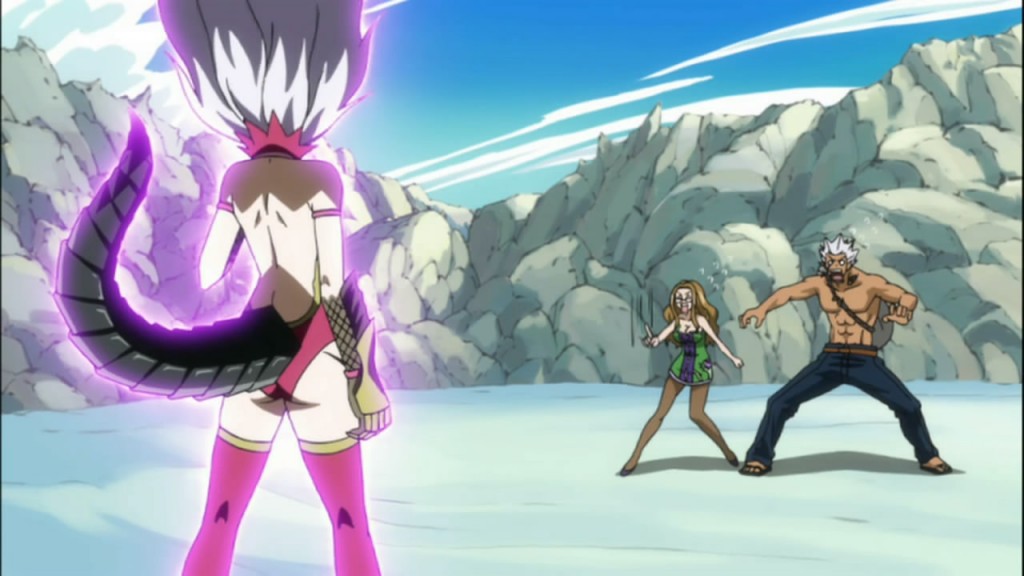 The other match up that we were shown looked equally bad and devastating for its candidate. Its kind of fitting for Elfman to take on Mirajane as his opponent. I don’t know whether Elfman realizes it or not, but he’s gotten a bit dependant on his sister, and he really needs to break out and become a true independent Otouko (Man).

The major battle though, was between Natsu and Gildarts. Wow…. did this battle not disappoint. This battle, in fact, was so awesome on so many levels. Leave it to Fairy Tail to make one of the most anticipated battles in the series into something that gave Natsu some great amount of depth in his character. Natsu was pretty much the typical shounen hero he always is in the start of the fight. He kept preserving and not giving up, and going at Gildarts no matter what the situation was. That’s the Natsu we know, and probably love. Of course, given how Natsu always just powers through everything without thinking, this next moment was made all the more powerful: 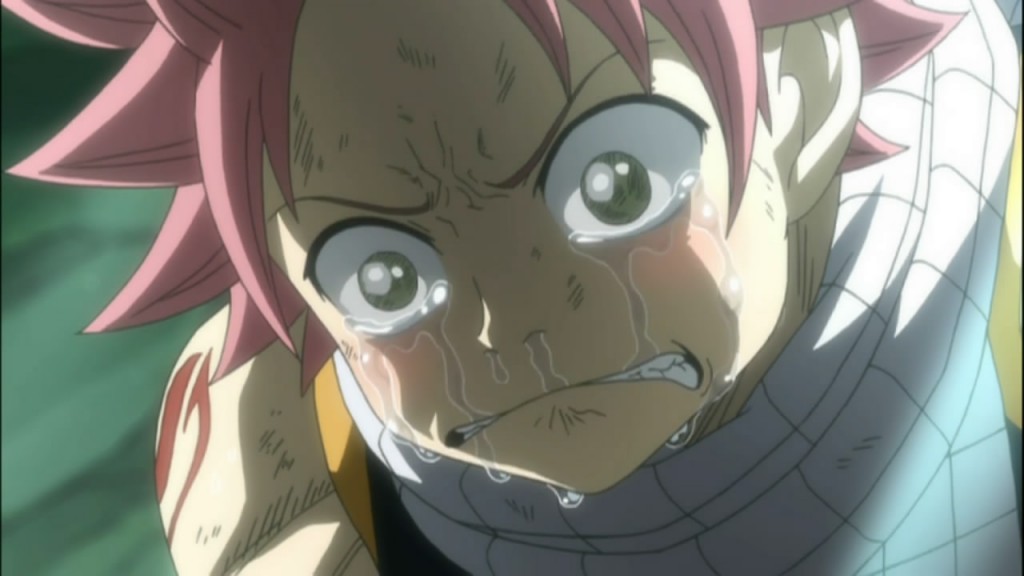 Natsu learns fear and cries for the first time! 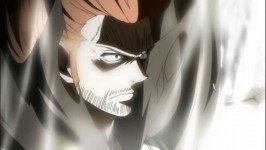 Wow. Natsu not only hesitated, he broke down, scared shitless and CRIED! This was quite the humbling experience for the guy. Natsu is always confident, sure of himself and jumps head first into everything. Uptill this point, we’ve never seen Natsu retreat or get scared. Much like how Juvia needed motivation, Natsu needs humility and fear as well. Gildarts is the closest thing Natsu has to a father figure, and it was amazing to see the father teach the son one final lesson as he progressed from being a kid to a real man. The flashback of Natsu and Gildarts in the battle only added to their interesting and very complex relationship. 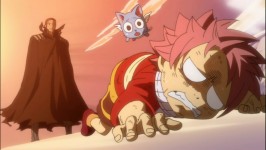 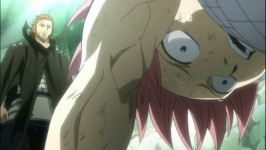 I must say, I really respect Gildarts. He’s definitely my favorite mentor type character, and might have one upped Shanks from One Piece (even though they are dead similar). This was an epic moment, and gave Natsu something to really think about. It made him realize that he has weaknesses, and he needs to actively and calmly look at bettering himself. Natsu learnt Fear, for the first time. That, in itself, is a huge thing for him. An experience that will probably help him onwards as things continue to get intense for him and Fairy Tail.

Also, on a side note, we got some Lucy and Cana Fanservice shoved into the episode as well.

Awesome episode, I’d give it an S Grade, but I think I wasn’t totally blown away like I was with Happy’s intense moment in the Edolas arc I’m sure that, by the time the arc is over though, I’ll have given out a few S Grades because of how this going. Three episodes in, and this much epicness? I cannot wait for the next episode! 😀

OP [Another Infinity] by Daisy x Daisy: (A)

Finally, we get another awesome OP! After the last OP/ED set, I was hoping Fairy Tail would up the game and it totally did. One thing I like is that there’s not a lot of cohesive spoilers. Sure, we get a lot of previews of what’s going to happen, but it makes no sense right now as to HOW it does, or who certain characters. I’d rather not speculate on the OP, as I’m sure I’ll hit some plot point or the other.

The song is rather epic as well, and I just absolutely LOVE the music. Daisy x Daisy is easily becoming one of my favorite Japanese bands, right up there with UVERworld.

We get a Natsu themed OP this time. Must say, after all the side characters, its  nice to see Natsu get his own ED as well. The ED has some sweet nice animation and I think a potential spoiler near the end. If that is indeed a spoiler, everyone KEEP QUIET. XD

I like this song and the music. While they can’t compare to some of the more awesome EDs I’ve seen from the series, its still a pretty nice, up beat ED theme that reallly does fit the character that it is aimed to represent. Nice stuff, may not be the best in the world, but I like it!

Next week we dive into stuff about Mest! See you all next week! =D