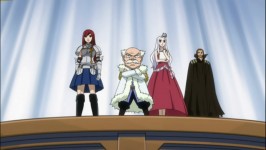 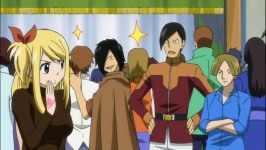 I went into this week expecting a mundane episode that was probably mostly going to be filler. As anyone who’s seen this episode will echo however, that is hardly the case. We got a superb introduction to the premise for the next arc, we had some nice partnerships and character moments, and we even got introduced to a new character. Everyone I know who has read the manga (the awesome commenters on this site included) has echoed again and again that the new arc for Fairy Tail was going to be big. How big I wondered? The Edolas arc had been pretty darn amazing, so how was the new arc going to top that. If the 97th episode is any indicator, the new arc is set to go from awesome to epic. Welcome to the S-Class advancement exam guys!

Ah yes, once again, apologies for this being up late. I was kind of busy all summer (and most of this week) doing some redecorating and spring cleaning for the place.  Hopefully I managed to make this site more visually appealing for everyone. We’ll be announcing some cool stuff on the main page in a few days, so keep a look out!

That said… It is kind of funny thate this episode started off in a way that definitely screamed filler to me at first. We had the most fanservice we’ve ever had from a standard episode of Fairy Tail (that odd OVA clearly not being one upped). We had a bunch of fanservice shots of none other than Lucy and Cana.

This episode seemed to start off as a Cana centered filler, and I was in many ways, fine with that. Fairy Tail has such a rich cast of characters that more often than not it feels like a waste that most of them are excluded from the fun. But little did I know that Fairy Tail mangaka ” Hiro Mashima” was waaaay ahead of me. Cana isn’t just being given some character development, she’s going to have  a HUGE role in this new arc. This was definitely something I could get behind!

The proceeding episode felt very reminiscent of a class shounen battle or sports manga. There was that awesome feeling of people teaming up, and getting ready to battle. I was definitely cheering for Natsu when he got selected as one o the candidates for the exam. Gray was an obvious second choice. And as they announced each new wizard, my eyes widened with exictement. I was pretty shocked to find that Gajeel wasn’t selected, but given how he’s kind of the black ops of Fairy Tail, it makes a lot of sense XD

The team ups were definitely the most fun part of the episode. We got nearly every awesome character somehow involved in this arc. The combos definitely make me excited though! 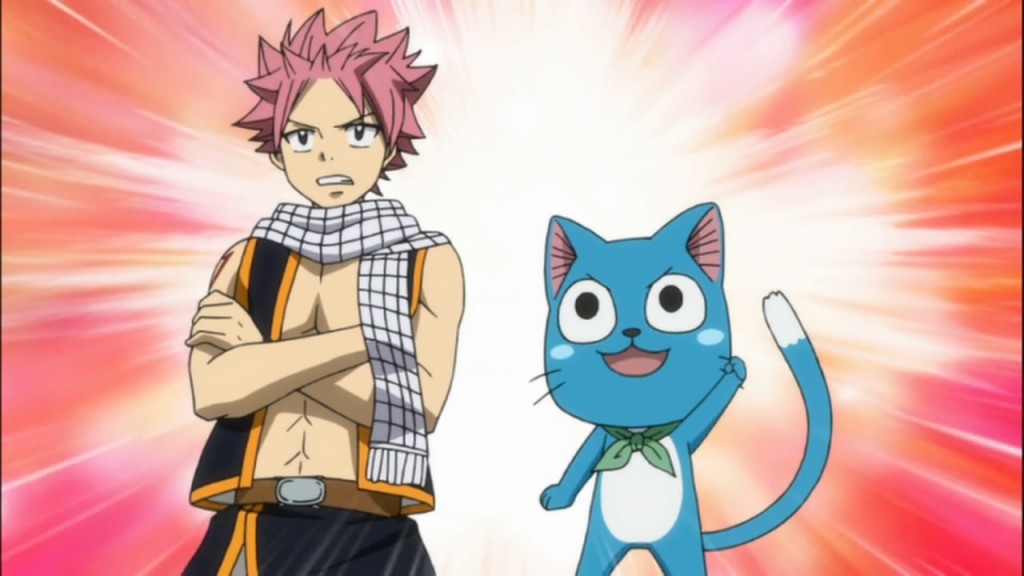 We have Natsu + Happy, which wasn’t all too surprising at all! 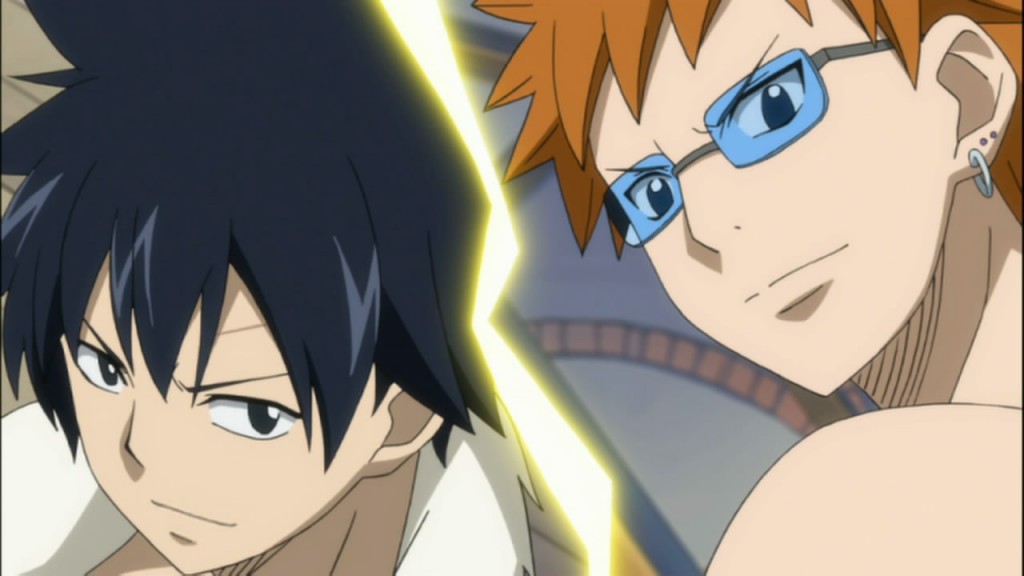 The Two undressing men TOGETHER?!?!?!?

Gray + Loke was definitely unexpected, but makes for a very very powerful combination! 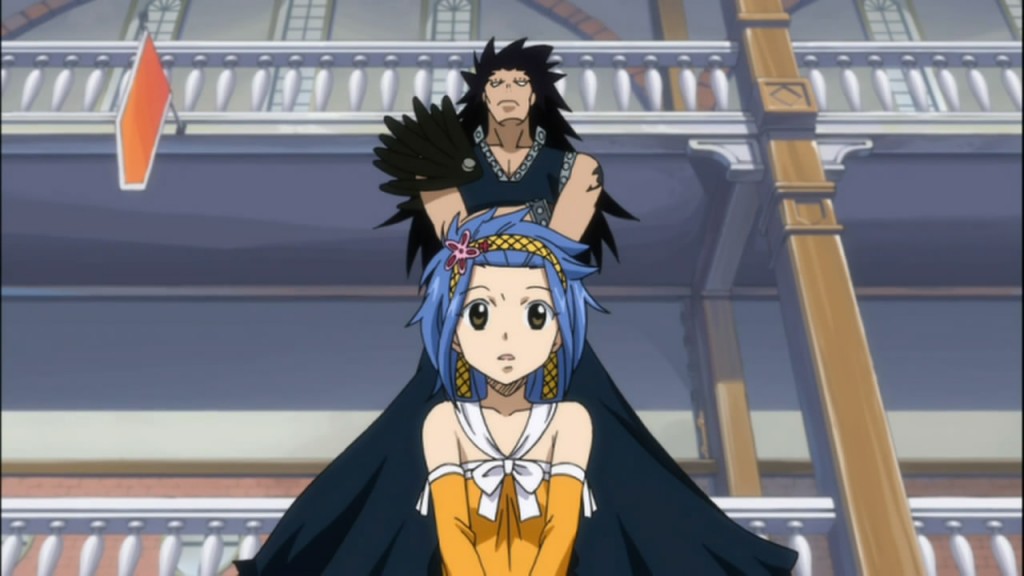 Nerdy and the Beast? XD

Levy + Gajeel was definitely not expected until Gajeel actually appeared behind her. Its kind of ironic that Gajeel was the same guy who pinned her up to a tree when they were enemies. Now he’s all about making her become a big S Class wizard XD 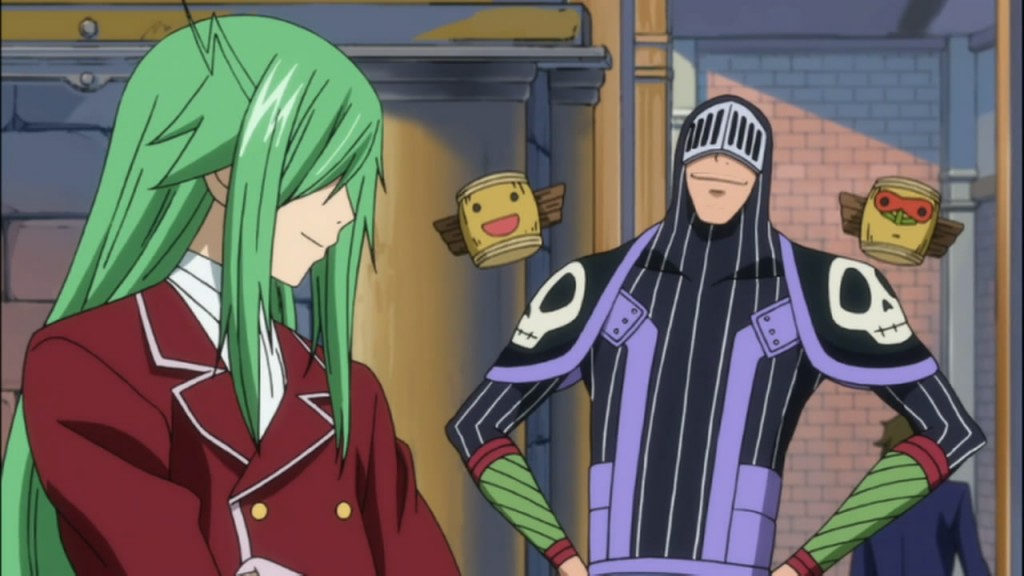 The Two Man Circus is in Town!

Freed and Bickslow were a pretty obvious pair up. I laughed at how obviously obsessed Freed is with Laxus. I’m sure there’s tons of yaoi fanfiction out there on this stuff. 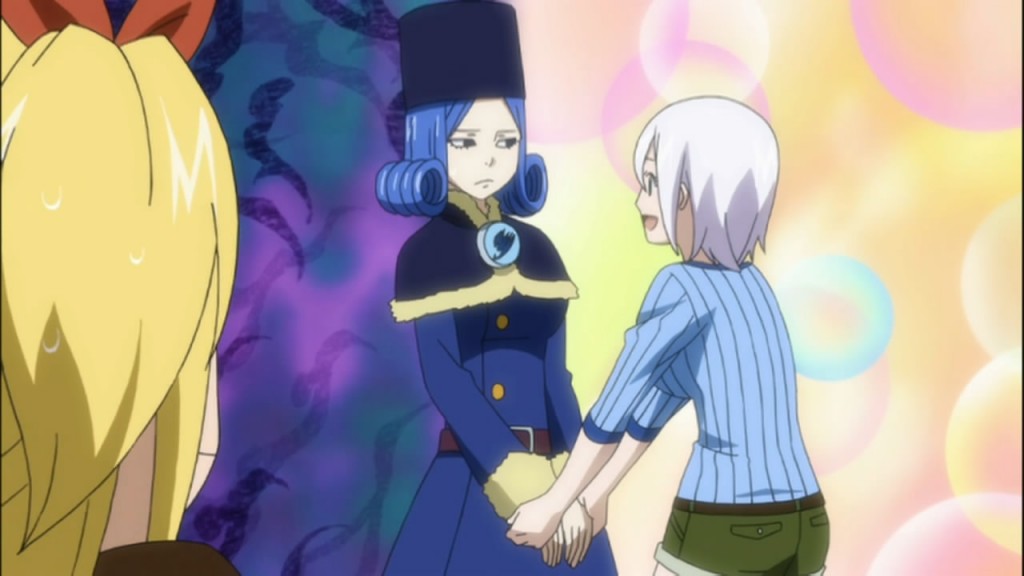 Juvia and Lisanna was definitely an interesting pair. I’m curious to see what Lisanna can do given that she’s been without magic for at least 2 years now. 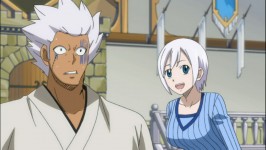 Eflman isn’t into older chicks eh? THATS NOT A MAN! 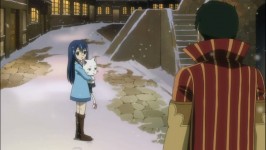 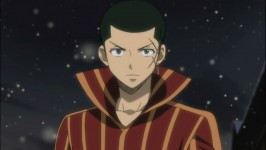 The more surprising one was the combination of Wendy + Mest. Mest is a new character, and seemed pretty bland and boring… UNTIL! Until it was announced that he was Mystogan’s disciple. That was enough, in fact, the fact that he was hardly there or noticed made total sense. I also found it interesting that despite Carla’s warnings, Wendy went with Mest. The whole vision that Carla had was more than enough to totally perk anyone curiosity!

The final pair, was the Cana and Lucy pair. This is where Fairy Tail really teased some epic stuff. We had the whole vision of the future with Carla, where she saw: 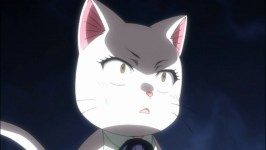 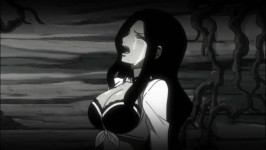 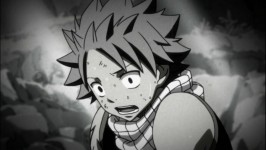 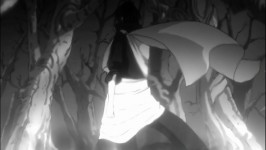 And that was followed up none other than Cana talking about meeting some guy, and crying infront of Lucy. I was a bit frustrated that we didn’t get to hear the exchange, but I’m sure it will all become clear as the story progress! For now, we just know that Cana has such an important reason that Lucy was not only moved, but decided to take on the likes of Natsu, Gray, Erza, Mira and pretty much all the strongest mages in Fairy Tail. Not to mention, she doesn’t have Loke until this exam is over!

With that said, this arc is definitely shaping up to be quite the adventure. In many ways, it seems to promise the best bits of Naruto and Bleach all mixed into one. We have a big exam with tons of the major characters potentially duking it out (Ala Naruto’s chunin Exam) and we also have some dark stuff going on in the background (ala Soul Society arc in Bleach).

All in all, this arc and this episode has me totally pumped for a great degree of awesome! I cannot wait for the next episode. 3 More episodes until we reach episode 100. I can promise that Anime Evo will be doing something very special to mark the occasion! =D 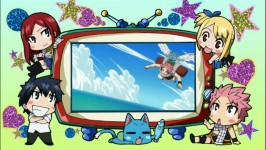 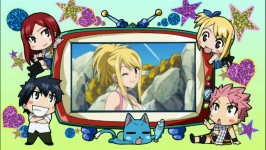 The S Class Exam begins next episode! See ya all next week!