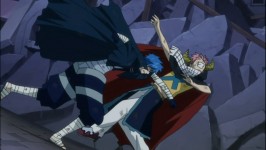 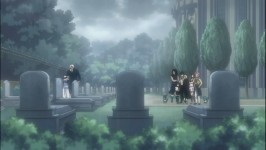 Before anything else, I apologize for the extreme lateness of this review. I actually ended up away from my computer and internet this past weekend and then got extremely busy as college rolled in. I actually wrote the review for episodee 94 last week, but wasn’t able to screenshot and post it up. So this is the first double review in a huge while: 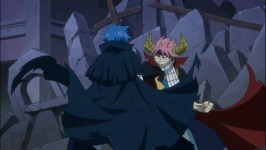 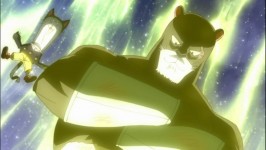 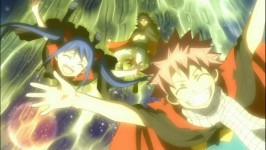 “Bye Bye Edolas” was one of Fairy Tail’s most effective arc  finishing episodes yet. Much unlike the past few episode of chaotic-ness, this week’s episode focused on one major event and scene and delivered it masterfully.

I really enjoyed the much needed attention that the episode squarely put on Mystogan and giving him a good send off. Natsu had a really great moment here, as he helped Mystogan/Edo-Jellal get over his lack of confidence and strive to become the new king of Edolas. One that would lead everyone to a new beginning. 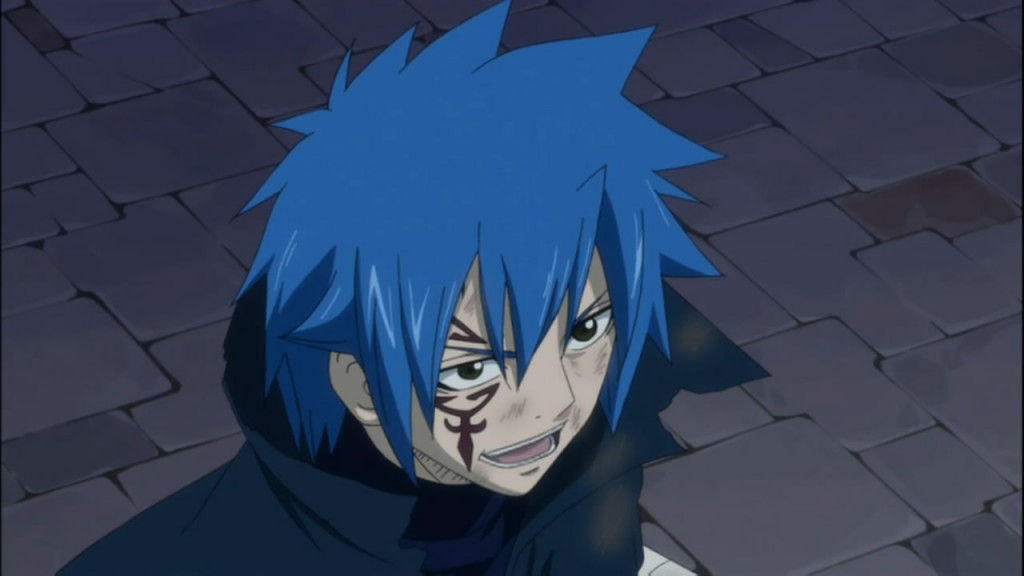 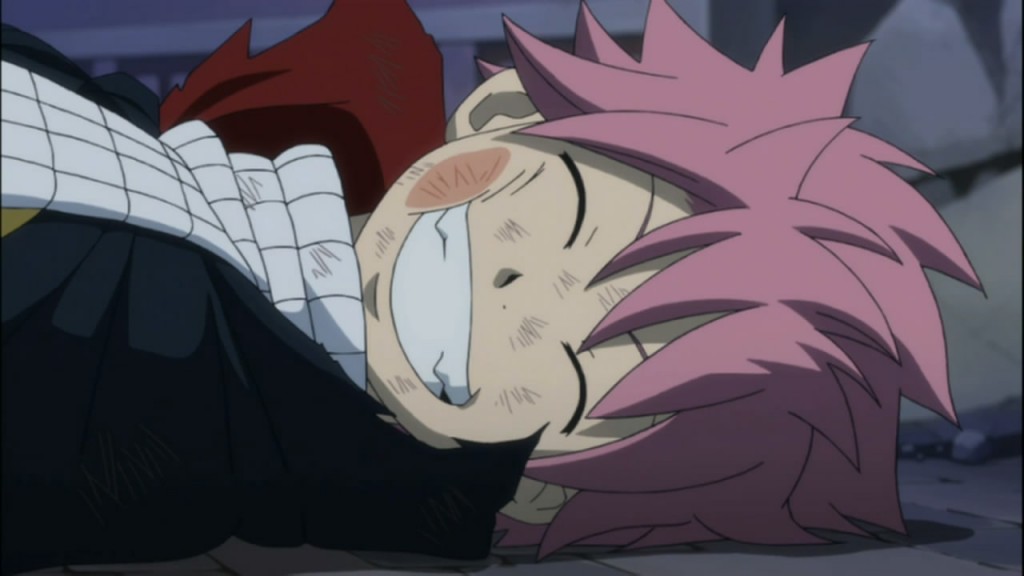 Real friends take a punch with a smile!

Mystogan was a bit more emo than I’d have expected, but that’s exactly why he needed his friends to remind him about Fairy Tail’s way of life and what he needs to do to move forward.

It was a bit sad, but still fitting to realize that with the Anima officially closing off, there wouldn’t be another trip to Edolas, ever. That touching finality really gave this episode and this closing moment its emotional punch.

I also have to say, that I’m pleased to see that the Exceed are actually heading to Earthland. They’ll definitely fit in a lot more in that world, especially given that there are entire islands with monster people on them XD 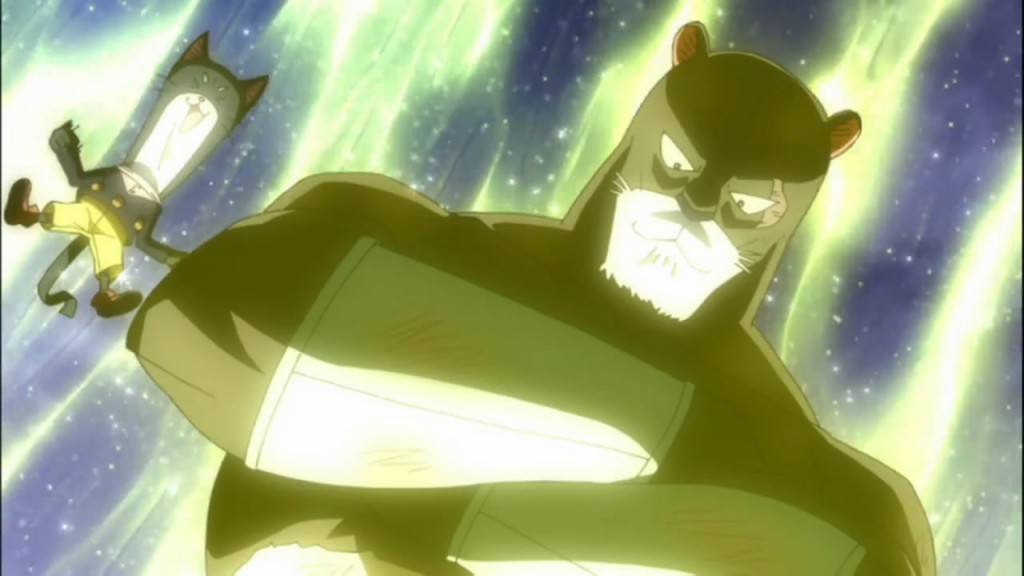 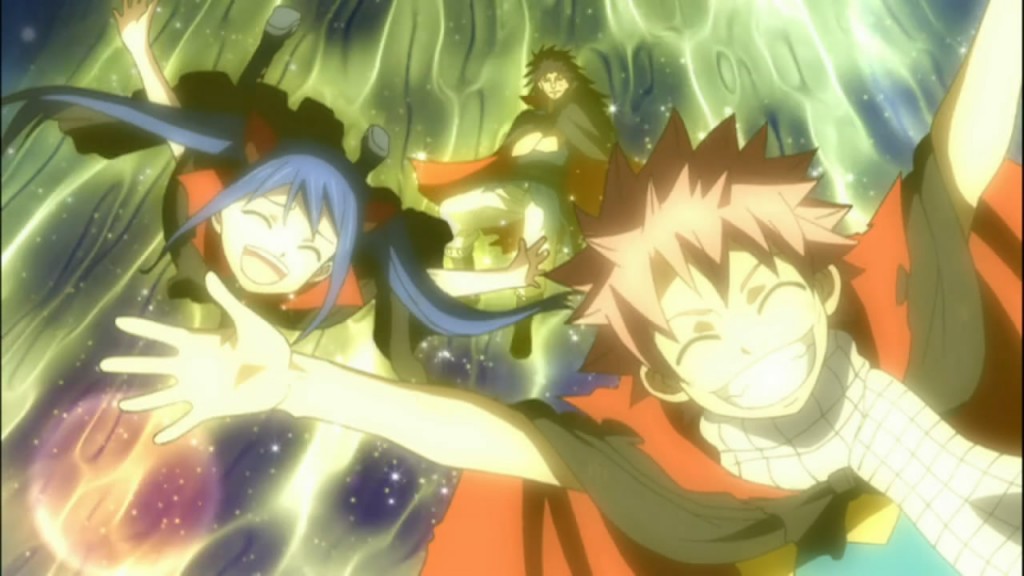 I really do wonder if Panther Lily will end up being Gajeel’s cat. I certainly hope he will. The Gajeel/Panther Lily combo would be friggin AWESOME. It would also make a lot more sense for Panther Lily and Gajeel to go solo and out on those dangerous missions that Makarov keeps sending him on.

All in all, a good episode and a nice fitting end to the arc. With this, Fairy Tail loses another of its S-Class Mages, and one of the coolest and most mysterious at that. I’m definitely sad to see him go.

So where do we go from here? If you had the misfortune of actually seeing the preview, then well, everything that might’ve been a major shocker (despite the already spoiler filled ED theme) would’ve had much more impact.

I definitely felt very cheated by this week’s preview, as it spoiled the one lingering question that I had about this arc.  I look forward to seeing the series explain a major retacon for a major death of a character next episode. A character, that the animation team is particularly obsessed over XD

So then, onto the next episode! 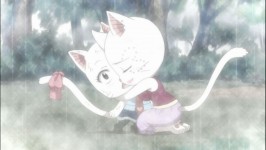 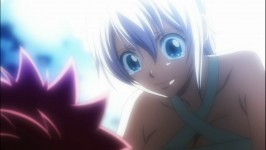 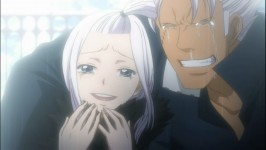 And with that, we end the Edolas arc, with quite the emotional episode at that. Emotion and touching moments were overflowing from this episode. It was quite an awesome finish, and really put to rest every question that viewers have had about the Edolas arc and its various plot points.

This episode also helped change my perception on a number of characters. It takes real talent to not only totally change evil seeming characters into nice and nobel ones, but its really awesome when it makes a lot of sense too. In this respect a lot of the explanations for a lot of things made total sense and were perfect. I don’t know if they were planned from the get go, but this wrap up really seemed to fit.

First we had the long awaited wrap up of the Exceeds issue. For one thing, they were in Earthland, and Carla wasn’t all too happy about it. Obviously, being told to kill her best friend from the day she was born was probably the worst thing she could ever experience. We learn the reason behind the big mission. Quite simply, there was none! XD

I really liked the explanation for this. It definitely made sense that, after seeing the future, the Queen decided to evacuate their young. She did it, and at the same time, she didn’t want the current population to panic. Taking the blame for on herself, she made a big plan for every child’s safety. But wait, what about what Carla had known since birth.

Turns out, since Carla was the Queen’s daughter, she had the power to see the future too, and that led to an infant Carla really getting confused. It really is one of those cases where no one was really at fault. You definitely had to admire the Queen’s resolve for handing that sword to her own daughter at that point, a few episodes back. Of course, the Queen refrained from telling Carla that she was her daughter, although everyone and their dog knew at this point XD

It does make me wonder about who Carla’s dad is. My money’s on Panther Lily, but more on him later…

With the Exceeds setting off to find the rest of the evacuated children, it was a time for good byes. Of course, to start off, the Exceeds were going to live somewhere close to Magnolia, and hence we got the very touching scene: 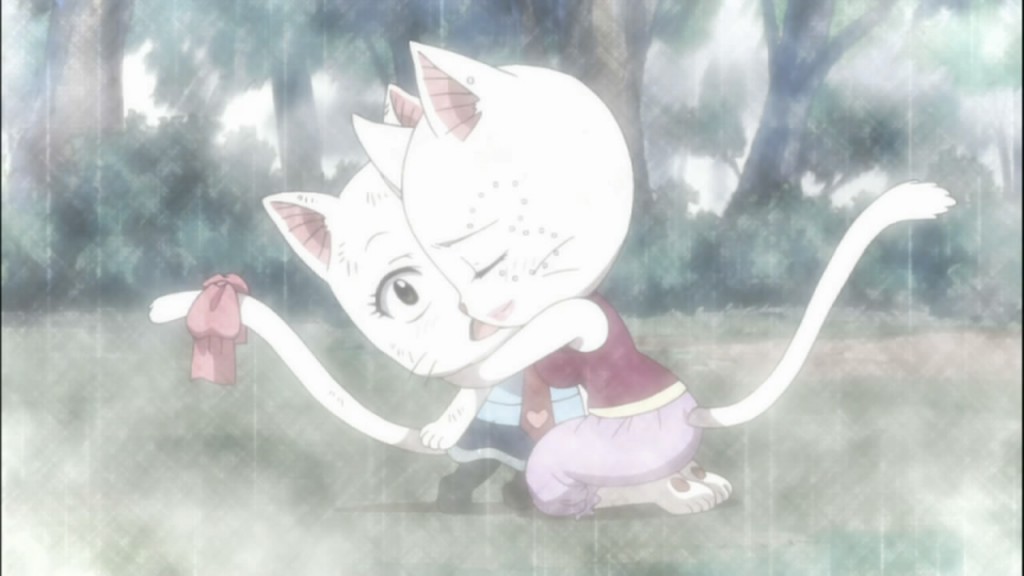 A mother huggin her Daughter, AYE!

We also got a nice touching moment between Happy and his parents: 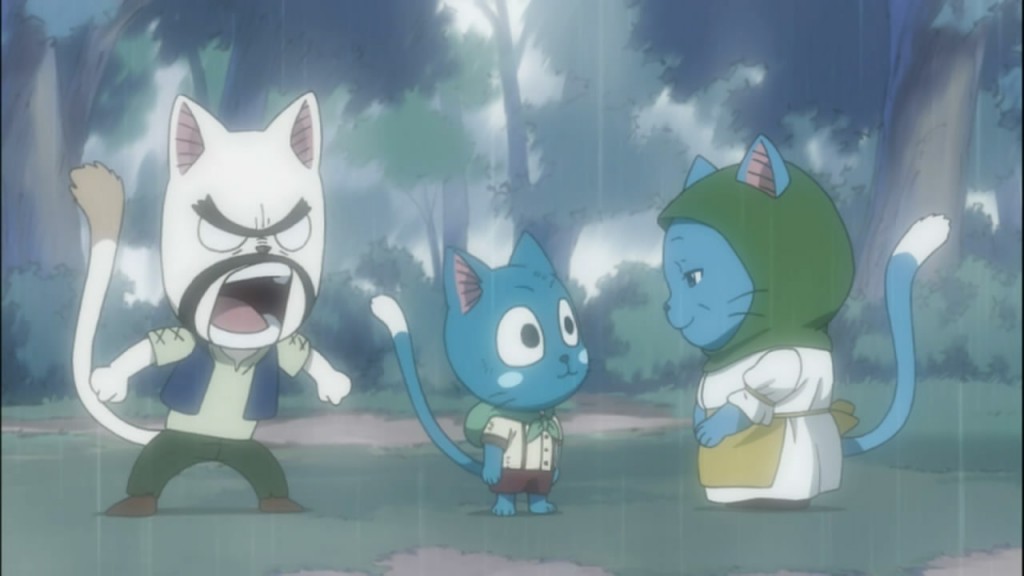 I think it was touching to see both sets of parents feel weird about telling their children. I’m sure once all things with the Exceed settle down, we’ll have an epic reunion between them all. All in all, the thing wrapped up and then we got the next awesome thing!

Gajeel finally got his own Exceed, in the form of a chibi Panther Lily XD. I was totally not expecting to even see Panther Lily join up with Fairy Tail, and go with the Exceeds. It was definitely nice to see all the Dragon Slayers get their own Exceed. And I think Gajeel was very overjoyed to finally have one: 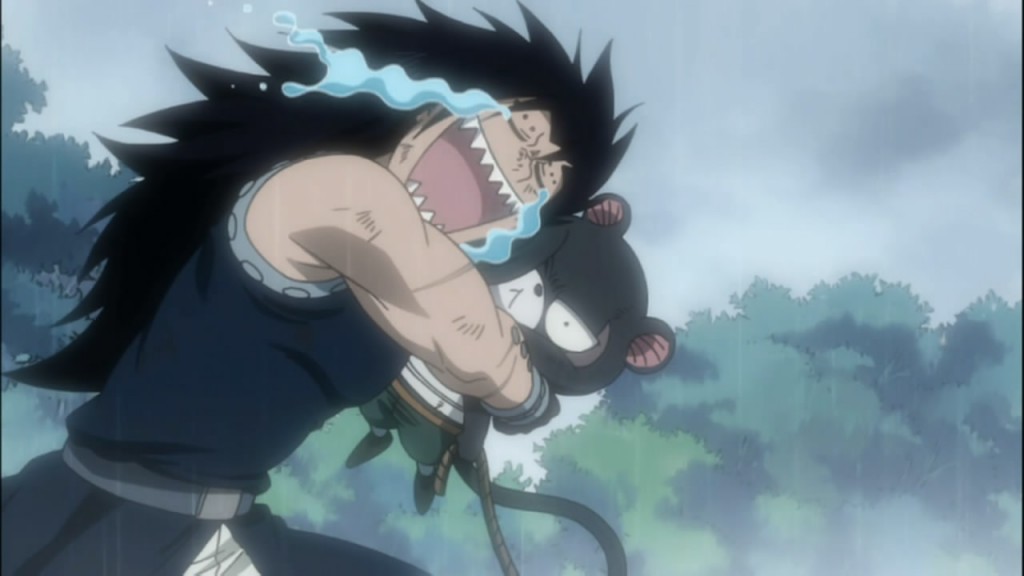 Gajeel finally got his cat! :O

Of course, the awesome hardly stopped here. There was a big chunk of the episode dedicated to… wait for it… The return of Lisanna! I’m sure the animation team was tearing up when they animated this. They were so excited about it, they could hardly contain themselves and spoiled it in both the ED theme and the preview for last week’s episode.

The first thing we saw her do, was glomp a very shocked Natsu and then hug Happy: 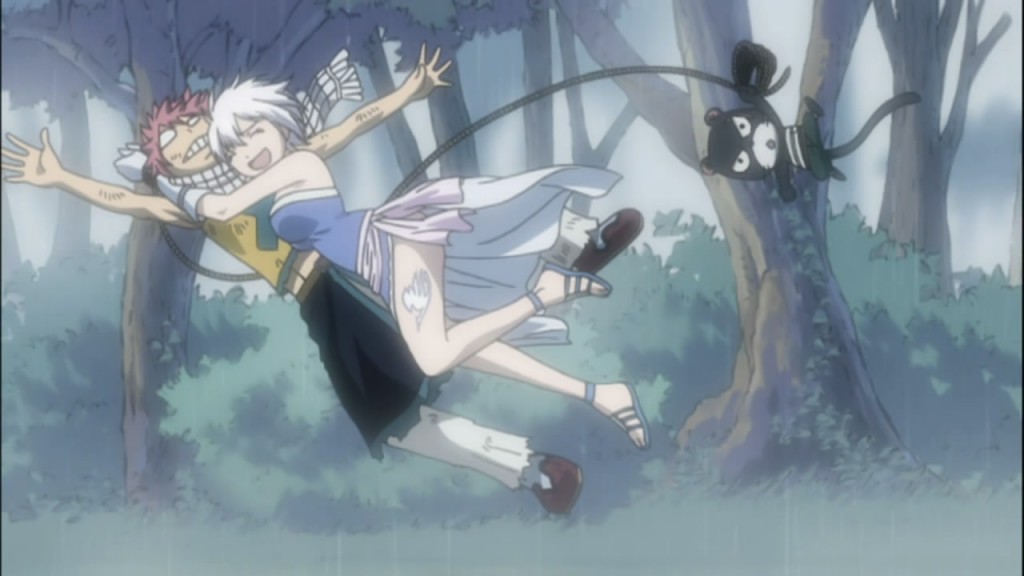 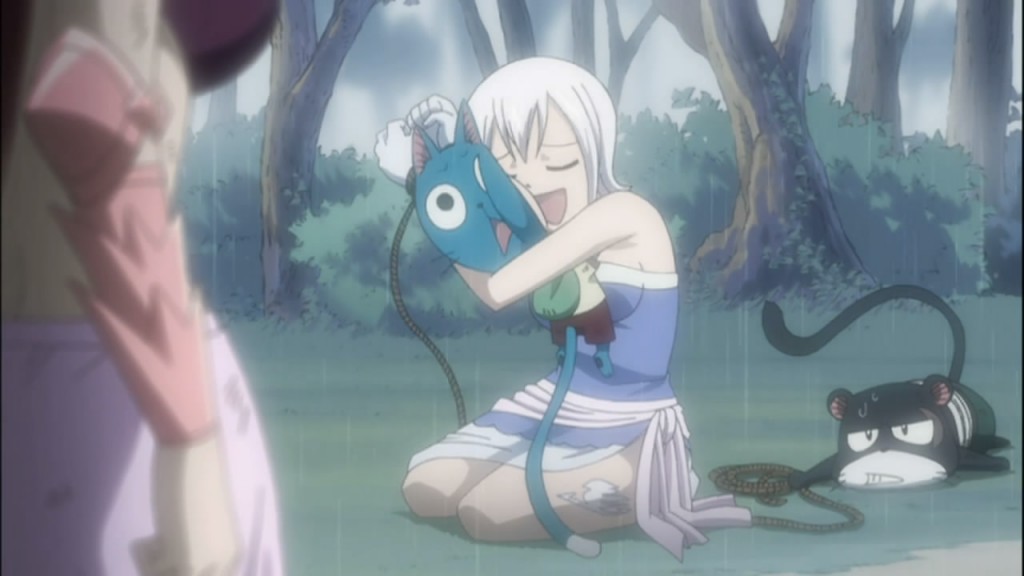 But before everyone could get all warm and Fuzzy, there were some questions to answer. How was Lisanna alive after being dead for two years?

So the return of Lisanna… Now this was definitely something I wasn’t going to let them off with easy. To the story’s credit, Lisanna’s return and her being alive was explained masterfully. I’ll be honest, before now, Lisanna was more of a tragic girl in Natsu’s past. Of course, that changed with this episode, as she became one of Fairy Tail’s strong female characters.

It was pretty believable to think that Lisanna was sucked into an Anima, and then had to live in Edolas for the last two years. I doubt Mira could’ve understood that Anima was actually just taking Lisanna away, rather than this being a weird death. I am interested to know why Lisanna’s Fairy Tail mark vanished when she went through Anima, but I’m sure I’m looking into too much. 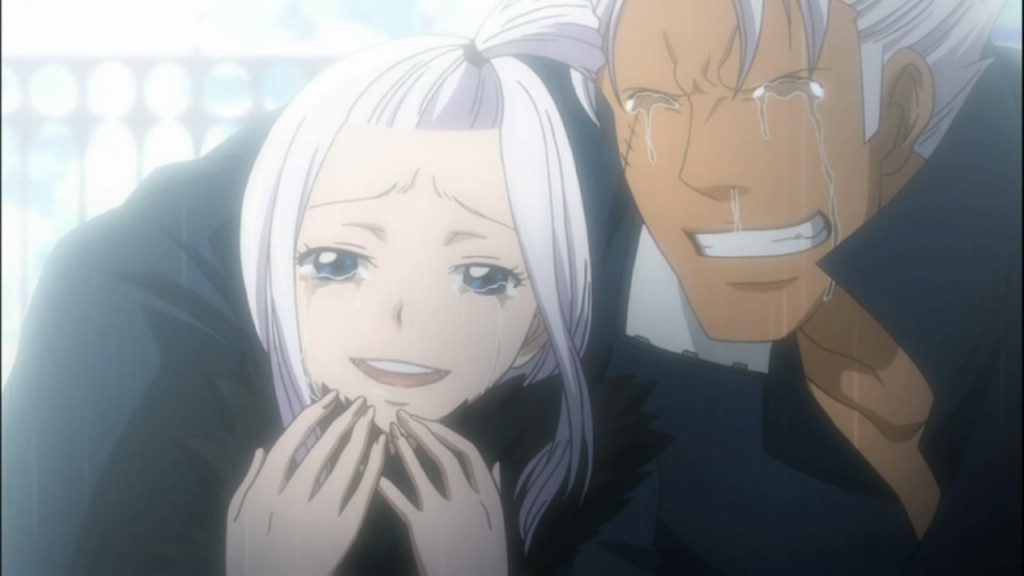 And after the explanation Lisanna gave, we got the most touching scene from Fairy Tail in a while. I’ve got to hand it to the animation, despite not being able to hold themselves back in the ED theme and previews, I definitely still felt really moved by the touching reunion between Mira, Elfman and Lisanna.

And thus, the Edolas arc marks its end. Fairy Tail sees the loss of Mystogan, but it gains Panther Lily and Lisanna? Hrm… Not a perfect trade, but still pretty cool. I’m definitely excited to see the next arc, which I’m sure will bring everyone from our main characters to the new guys front and center.

Fairy Tail’s Edolas arc, you were awesome. On to the S-Class Approval arc! =D

Looks like we’re getting some Edolas stuff before the next arc! See ya all next week!