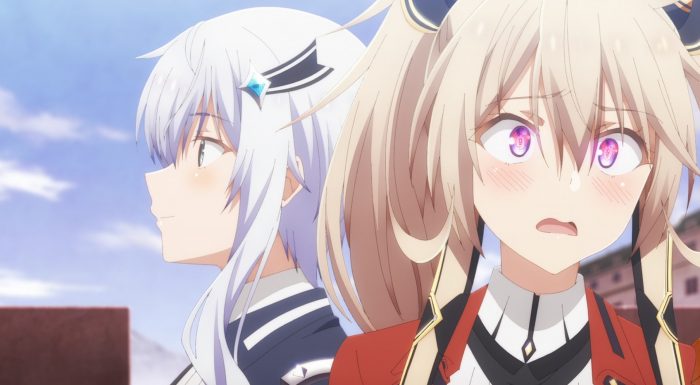 Not a bad return from the first episode here. It just jumped right in and established the new threat that will be making life interesting for the main cast. In some ways it was a good move to start out with a lot of flashback material since it does set up what is going on. It also helps dodge having to deal with what I think is the biggest issue of the second season…the voice cast. The good thing is that the quality seems right where the previous season was and it’s pretty much as fun as ever. The supporting cast remains a highlight and might even be more important now than they were in the original show. 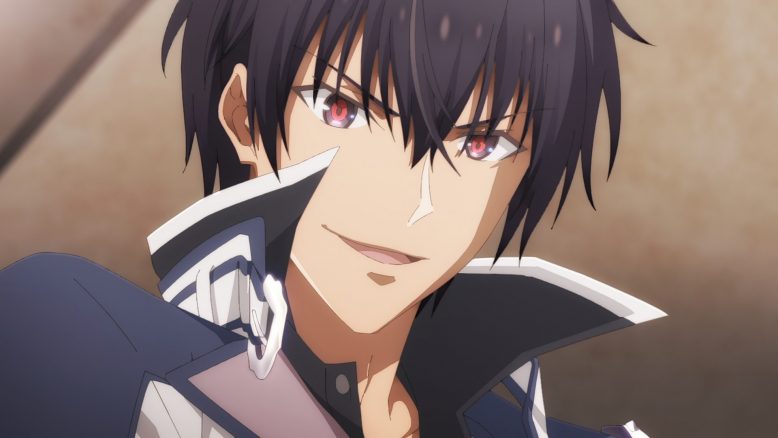 At least Anos still has presence

I’m not going to dodge a topic that I’m sure some are sick of. The voice change for Anos is noticeable and will be the biggest hurdle for getting into this show. Yuuichirou Umehara is doing his best I’m sure as the replacement for Tatsuhisa Suzuki in the role of Anos. It’s a voice he’s gone with for a lot of roles. It worked fine in say Akuyaku Reijou as Claude. But there’s a noticeable gap in how their voices reflect Anos’ personality. The current Anos reflects a steady and serious version of him. But with the original show there was a bit more fun and spark to the character. Even when he’s stabbing a god possessing a demon with a sword there isn’t quite the same punch to his “did you think” line.

Now it’s understandable why there was a change, and I don’t want to delve into that too much. But it’s too bad the show itself does lose something with the shift. And it really is too bad that the character that suffers from this is the main character of the show that everything revolves around. It’s one of those things though that will just require me getting used to. Although I do have a feeling the second season won’t rank as highly for me because of that. At least it’s not as horrible as the return to D.Gray-Man that basically recast every single character. That show was simply unwatchable due to that. And I’m glad anime doesn’t run into the recasting issue that often. 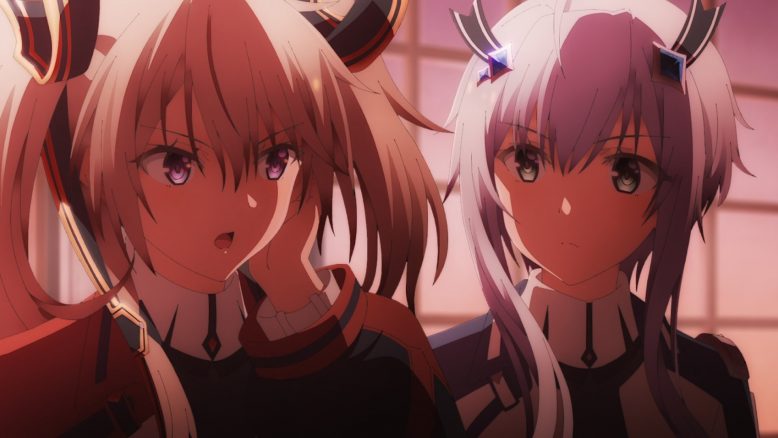 I’m glad to have these two back

The rest of the episode was fine. It was nice seeing Sasha and Misha again. Those sisters remain a lot of fun and are still extremely cute. Plus, with Misha pointing out Sasha’s tsundere tendencies there is less issue of things being misunderstood around Anos. Of course, there wasn’t a lot of moments for either of them since the focus was on the “new teacher”, the god child, and setting up the current dilemma. At the very least though this episode does lead to what should be good moments for the rest of the cast. It’d be tough to not give them some good moments. So, I expect the second episode to be a bit better in that respect. But it is still good to have them back. 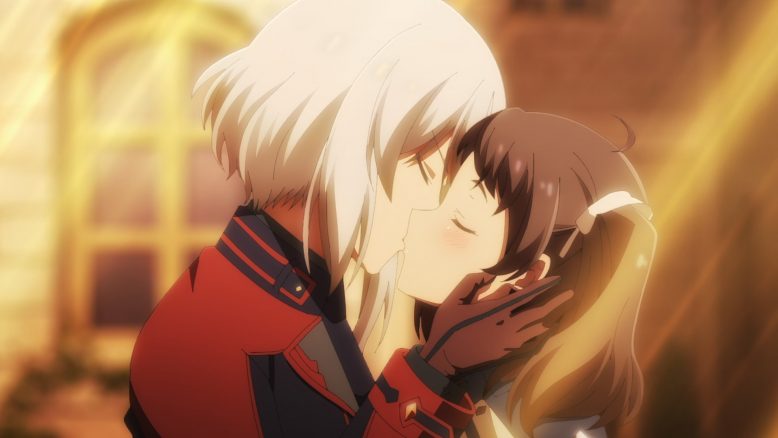 At least they had a good moment

Kanon really needs to work on his protection skills. I don’t want to disrespect a hero here, but he did manage to allow his love interest to get stabbed when he was standing beside her. Everyone gets caught offguard sometimes, so I won’t criticize him too hard. But this really isn’t one of the times he’d likely want to mess up this badly. I’m sure she’ll be fine, just as I’m sure she’s set up as this god child mentioned earlier. There are way too many connections established for her to be otherwise. The flashback with the goddess traveling with the stoic swordsman Shin that looks like Lay/Ray is one thing. That Goddess being a target to…give birth to the god child being another. But Misa’s powers also lean towards the goddess side of things. Maybe it’s a trick though and she’s only a descendant of that Goddess and Demon.

But it still is a troubling situation to have her in that state. They had a good moment there before things went sideways. Kind of too bad for her that she makes a big show about standing by his side and not being afraid of death when he might be in danger…and then she’s close to being killed. She’ll be fine, but it’s a rough thing for her. At least she’ll likely come out of this both powered up and further along in her relationship with Kanon. 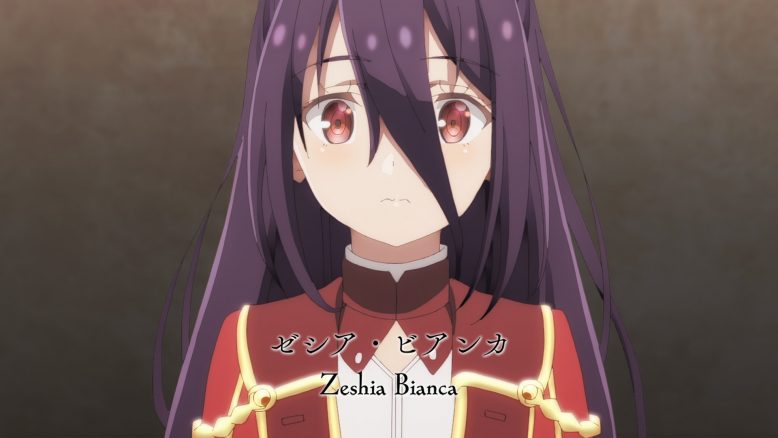 Welcome (back) to the show Zeshia

It’ll be interesting to see how the various showdowns play out. I expect Anos’ group to win their fights, however getting to that will be fun to watch. Especially new additions to the cast like Eleonore and Zeshia. That (effectively) mother/daughter duo will certainly have the potential to do some good work. If nothing else it will be interesting since Zeshia never really had the chance to have a personality in the original series considering her origins. Now she’s starting out and will have to pick things up as she goes. I’m sure that Kanon (despite his mistakes) can handle his side of things. Same goes for Sashia and Mishia. Those two showed how far they’ve come last season and I’m sure they’ll keep doing so this time around. 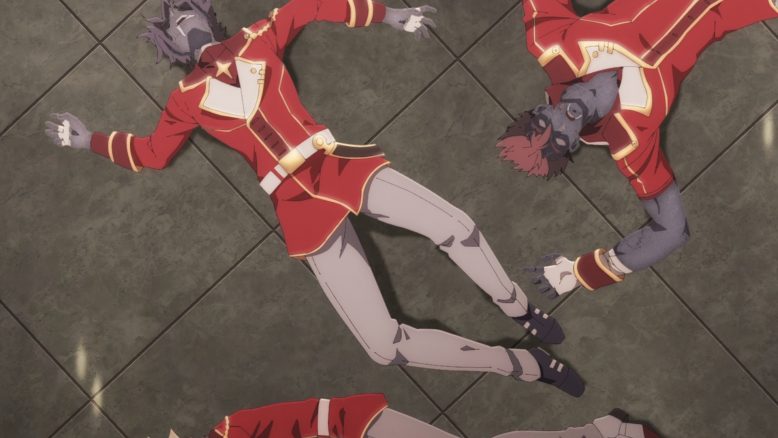 I see these guys are as useless as ever

I do think this was a solid return for the show and about as good as it could be. It’s just unavoidable that it isn’t quite as strong a debut as season 1. That was just a fun first episode that really set the tone for where this show could go. This picked things up just fine and allowed the story to move ahead. Enemies are still not fully grasping how OP Anos is, but I’m sure they’ll figure it out as he continues to break any commonsense limits they have in mind for him.