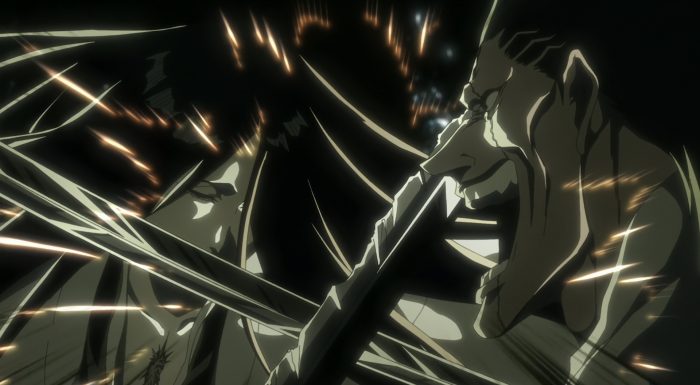 We are absolutely in a training arc right now. And it really says everything about how dire the situation is that Kenpachi is the one getting the most focus when it comes to training in this episode. This war has the Soul Reapers on the backfoot in so many ways. Obviously, the biggest deciding factor is going to be whether they can stop the Bankai theft and even get the Bankai back. But the next factor is just having strong enough fighters to take on the Quincy. Kenpachi as he is, isn’t strong enough to take on the top threats. He can handle some opponents, but they’ll need him to basically reach Yamamoto levels of power just to even the playing field. That’s especially true if I’m right and Unohana is planning on dying during this training session. 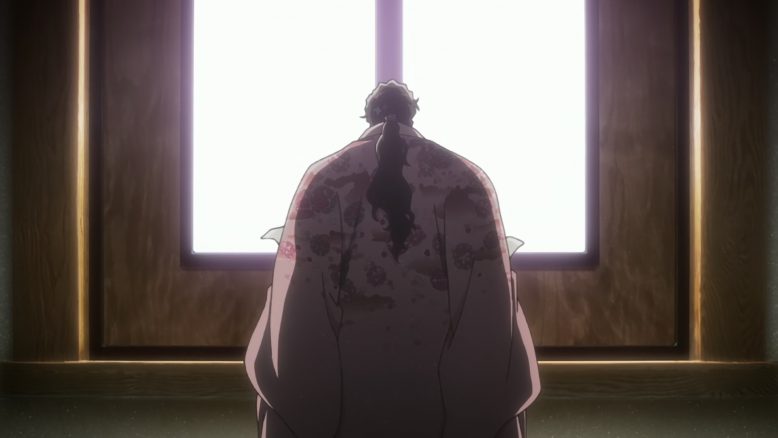 Lot of weight on his shoulders

Shunsui being promoted to Head Captain makes the most sense. I really couldn’t think of any other option at this point in time. Ukitake is a cool guy, but he’s frail in terms of his health. So, he’s just not the guy that can be the core of the Soul Society Captains. I could see Hitsugaya getting that job down the road. He’s got crazy talent, pretty good at managing people, and it would certainly fit. But he’s not ready now and is ironically too much of a hot-head for this situation. Plus, his Bankai was stolen and I don’t think they are promoting anyone to that spot that currently doesn’t have their Bankai. I do think that Shinji would have been an interesting choice. But he did just get back to Soul Society and I don’t think they’d be ready to make a Vizard the Head Captain.

It’s still a rough spot for Shunsui though. He just lost his teacher and someone he truly looked up to. Now he has to fill that man’s shoes and carry on in the middle of a brutal war. That’s how it goes sometimes, but that’s a rough spot. I’m sure fighting to take Nanao with him into Squad 1 was important on so many levels. Emotionally he needs a familiar face with him during all of this. Plus, he can’t protect her like he’d want if she’s in another squad. It’s a tough spot having to take over a squad that just lost the Head Captain and their former Vice-Captain, but he’s certainly capable of handling it. 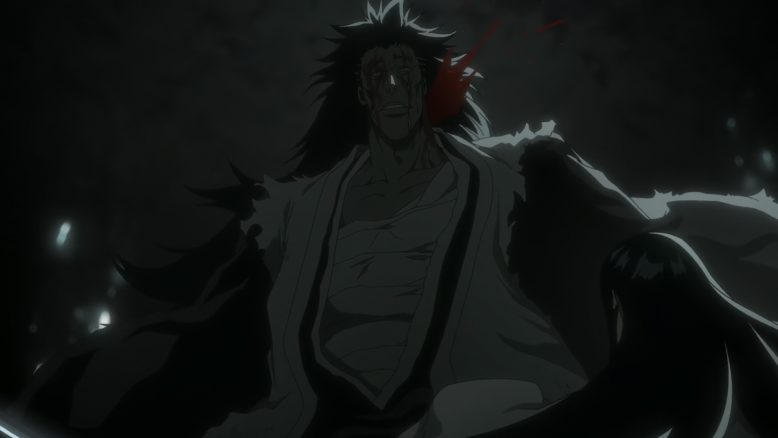 Just another day of Zaraki getting cut up

Zaraki has always been one of the more interesting and entertaining characters in Bleach. He’s an absolute battle maniac who really will just follow his desires wherever they might lead him. Despite being the first Captain that Ichigo ever fought, he hasn’t lost his threat level as the show has gone on. And he’s been a unique element since he doesn’t use Bankai or even Shikai. He’s just crazy strong and will be perfectly fine getting into a brutal cutting battle with his opponents. So, it is pretty interesting having him get this training arc. There isn’t any luxury of Soul Society being cautious with powering him up. If they don’t have him there to face off against the Quincy then they won’t have a tomorrow to be worried about.

There is definitely a lot of curious elements at play here though. It is revealed that Zaraki had faced off against Unohana long ago. And each has their own scars as evidence of that struggle. Of course, I presume that she wasn’t the captain that he fought to gain his current place in Soul Society. Otherwise, it would be a lie to say he killed a captain in the past. Even if Unohana clearly gave up front line fighting to play a supporting role she was definitely still alive. In that sense I wonder if he fought Unohana before or after that captain that he supposedly killed. I suppose it is still possible they count him seriously injuring her as killing her and that leading to her taking on the healing position, she is presently in. 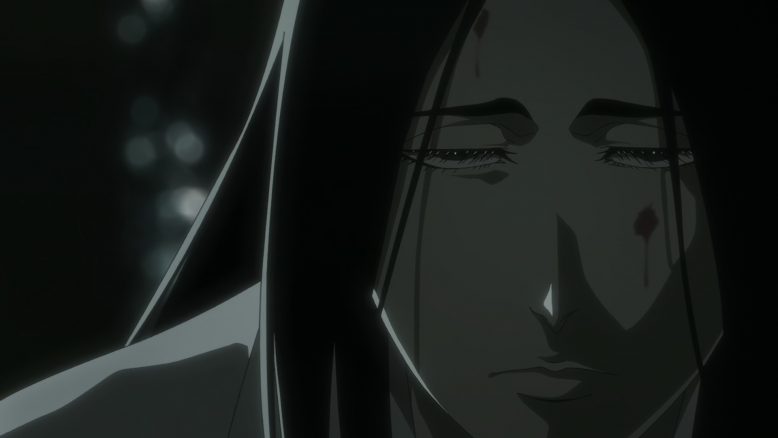 Oh boy she’s definitely getting serious for this

There are definitely a lot of questions though. Honestly Unohana doesn’t look that old despite being in the original Thirteen Court Guard Squads. But clearly that is the case. I guess Yamamoto just aged really poorly compared to her XD. The bigger thing obviously is Unohana giving herself the name Yachiru in the past. It can’t be a coincidence that there is also a Yachiru who is Zaraki’s Vice-Captain. The weird thing is that it is a first name so it’s not like there’s any blood relation between Unohana and Yachiru. So, what’s going on there?

It is a pretty tragic turn though. I’d say all parties are going into this well expecting Unohana to die along the way. But if she is a master of so many sword styles then she is the perfect one to “instruct” Zaraki who basically just fights without much structure at all. We already saw how much stronger he got after one kendo lesson from Yamamoto and making use of that in battle. So, if he actually learns one or more sword styles from Unohana…then his power could absolutely skyrocket. 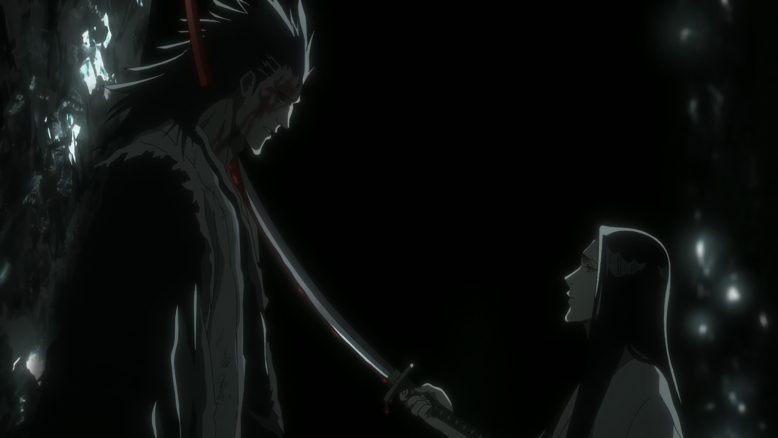 This is less common for him

The battle itself already was pretty fun. Zaraki gets into his fights like no one else. But even he had moments of weakness. And it’s interesting to take in that he might be weaker now than he was in the past. But in that sense the question is why? Was he slowed down by constantly weakening himself to make fights more interesting? Did he lose some passion for getting stronger after his previous fight against Unohana? I don’t know. At the very least we know that he idolizes her strength and it would eat him alive to just lose without scoring a win. And honestly based on his own words I’m curious how that first fight played out minus the two ending up with scars. It sounds like he didn’t win but I don’t think he outright lost either. 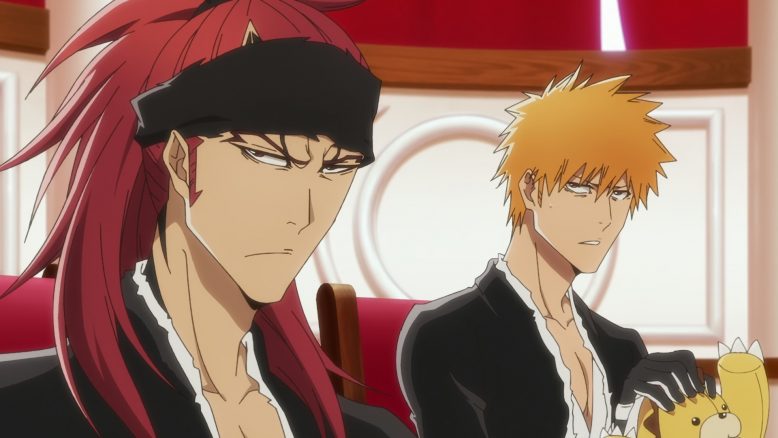 Unusual day for these guys

I can feel for Ichigo in this episode. He’s struggling with the knowledge he gained in that previous fight. Learning that he has some Quincy blood in him has to be eating at him. But he’s also got a broken Bankai, injured friends, and so much to deal with. So just sitting down and gobbling up food wouldn’t feel right. But Renji is right. Even if Ichigo wasn’t brutally injured, he was still injured. Getting ready for training and re-forging his sword is important. He can’t just rush into the next step and get killed along the way. It might feel wrong, but it is what they need to do right now.

This episode also hammered home how old and powerful these Zero Squad people are supposed to be. They are all legends in some way and yet are basically used as the personal security for the Soul King. Something just feels off about that. But I guess Ichigo can have his best chance to repair/reforge Zangetsu thanks to the person who invented the Zankpakuto. 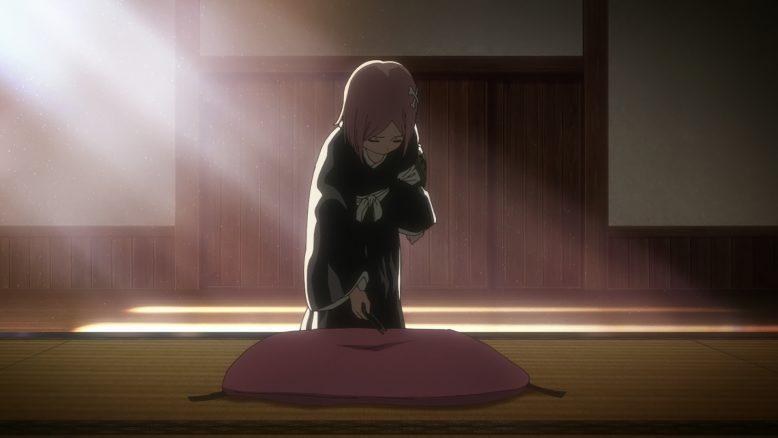 I’ve got some Yachiru questions for sure

It’s funny that even with these being cool down episodes (compared to the Quincy assault) we’re hardly taking it easy. We’re heading right into a brutal showdown with Unohana and Zaraki. And there’s all sorts of questions being raised there with the idea of him getting stronger when nearly killed. Did Unohana literally curse him or is it just figurative? Is Zaraki a Saiyan? Just kidding on that one, but there’s a lot going on. But the biggest thing still may rest on Mayuri or Urahara. If they can’t find a way to counter the Bankai theft then there’s not much the cast can actually do. If only Ichigo can use Bankai (presuming it is fixed in time) then they kind of have their hands tied here.