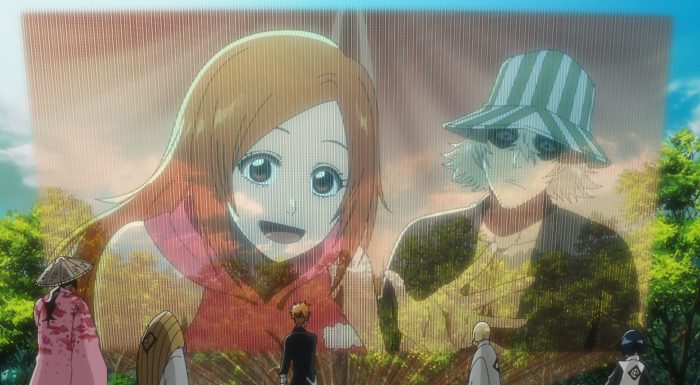 This might be the first time the Bleach anime has had a chance to breathe since this sequel has started! It really has just been non-stop action and conflict the whole time. Things started up with that prelude attack on Soul Society and against Ichigo. It’s just been one crazy ride from that point on. So I can appreciate the show letting us decompress a bit and just take stock of the losses and what is at stake here. The Quincy will be back, and their assault will be horrific. The time to act is now. Of course, it’s hard to say how prepared the main cast can even get. Some Bankai have been stolen and others have been broken. The situation isn’t great. 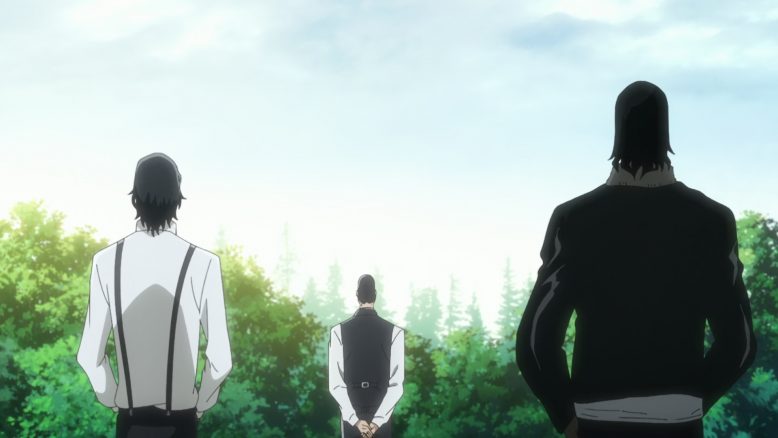 Didn’t think these guys would return

Finally got my answer regarding who saved Inoue and the others. Will admit that I didn’t think the answer would be Grimmjow! Mostly since it’s been a while since I watched the whole Arrancar arc and so I didn’t remember if he was alive or not. But it makes sense. He is more than powerful enough to finish off a distracted opponent like that even without releasing his powers fully. And he would initially be hostile to Urahara. It does leave me wondering just what kind of deal was made with him. Just promising him a rematch with Ichigo once this Quincy situation is under control? Hard to say at this point. But he’ll keep things under control in Heuco Mundo.

Speaking of characters I didn’t expect to see alive…hey Ginjo! I really didn’t expect to see that guy since…Ichigo did kill him. But…it is Soul Society. It kind of makes sense to see the guys we know were killed in the Fullbringer Arc once again. If they can be whipped into shape and made to cooperate, then they would be helpful. The clock guy I’m not sure about, but Ginjo and Tsukishima are strong individuals. Hard to say if they’ll help considering the antagonism they have for the Soul Reapers, but they would be useful. 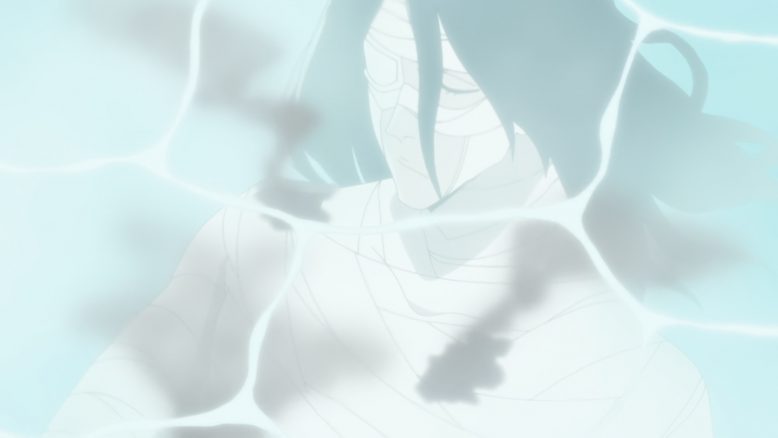 Some might be unhappy that Byakuya survived after that emotional scene with him asking Ichigo to save Soul Society. I tend to appreciate characters being alive unless a show constantly fakes us out when it comes to deaths. And I don’t think that’s the case here. The casualties are still massive with thousands upon thousands of Soul Reapers killed. And they did kill a few notable guys like Kira, Yamamoto, his vice-captain, and even his third seat. Not a lot of named people were killed, but there’s no mistaking the level of loss and tragedy coming from this previous attack.

It just means that Byakuya will get his chance for payback and getting his Bankai back. And honestly, it’s good for Rukia and Renji. Those two were beaten up physically so I’d rather save them emotionally. And not having Rukia left grieving for her brother allows her to show more concern about Ichigo. It was nice to get some banter between them for the first time since the show came back. That friendship is great and I’m glad to see it holding strong. Plus, Rukia is the one person that knows him well enough to realize something is eating at Ichigo beyond just the tragedy. It was also nice to see Ichigo and Shinji interact again even for just a bit. 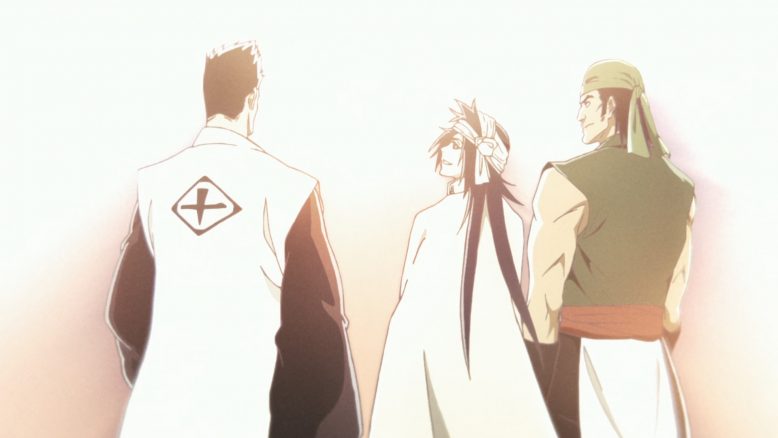 I’m curious about what Ichigo will learn

Ichigo doesn’t even have time to process the Quincy heritage bit with Zangetsu in that state. I didn’t think it would be that much of a problem to fix it. It does feel like a bit of an extra hassle to make breaking a Bankai much worse than a Shikai. But I can buy the logic that it would be worse. And it does give Ichigo a reason to head to where the Soul King resides. I’m not sure what reforging his Bankai is going to entail or how the result will end up differing from what it is now. But it is obviously necessary. Ichigo no matter what blood is running through his veins can’t do much without his sword. He’s not going to suddenly go on a hardcore training regime where he learns to fire a bow like Ishida.

There is frustration that Ichigo doesn’t have time to go back home right now. The one person he needs to be talking to is his father. But he doesn’t have the time to go and do that. It would make things too easy, I guess. Isshin is the one person that can answer Ichigo’s questions about being part Quincy and of course the likely heritage of his mother. I’m curious what Kukaku thinks Ichigo is going to find out and what will make his father sad? It probably has to do with his mother, but I’m still curious to find out what it is. 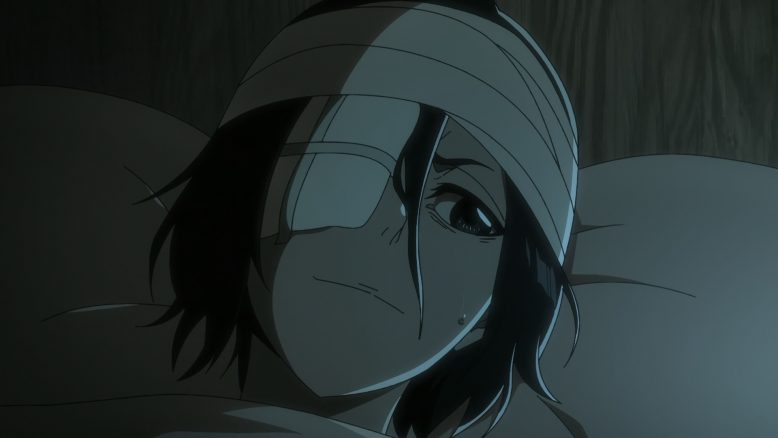 I’ll give a nod to the nice little moment with Ichigo and Inoue. It’s nothing big, but just a good little scene. Naturally they both brighten up when getting in contact with the other. I would love it if both Inoue and Chad were allowed to do something big in this arc, but that may not be in the cards. At the very least it was important to not have Ichigo running all over the place while never talking to his friends at all. He’s going to keep racing ahead in his effort to protect those around him. But he can’t quite do that if he doesn’t know how the precious people around him are doing. No surprise that Inoue and Chad will be worried about Ichigo and where he’ll end up trying to protect everyone, but they also know he won’t stop. 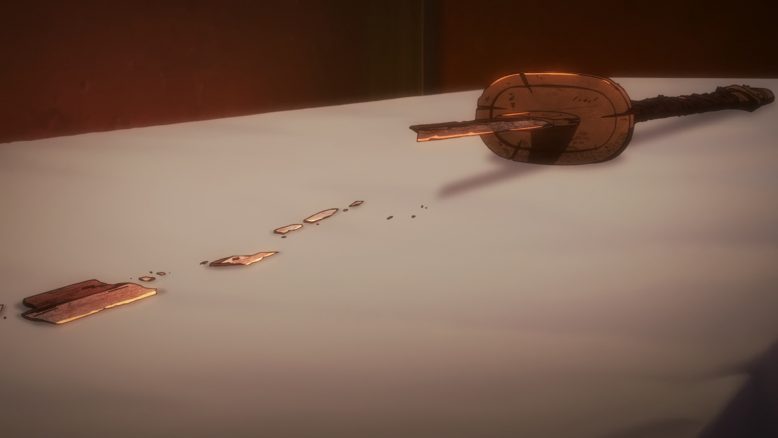 This was a good episode. It wasn’t a crazy and wild one, but it was good. I’m not expecting the 0 Squad to last very long. They seem like powerhouses that get introduced just to be defeated later XD. But they do seem useful. Without them I don’t think Byakuya would have any chance to rejoin the fight before this arc is over. And I am curious about the implications about Unohana and her connection to that squad. But maybe the most interesting thing is how their bones are basically key cards to the Soul King’s domain. Having them join in the fight against the Quincy might be a bad move in that sense. But I guess we’ll see what the Quincy do next. I think we might get a few peaceful episodes before the tension starts ramping right back up again. But I’m perfectly fine with that.