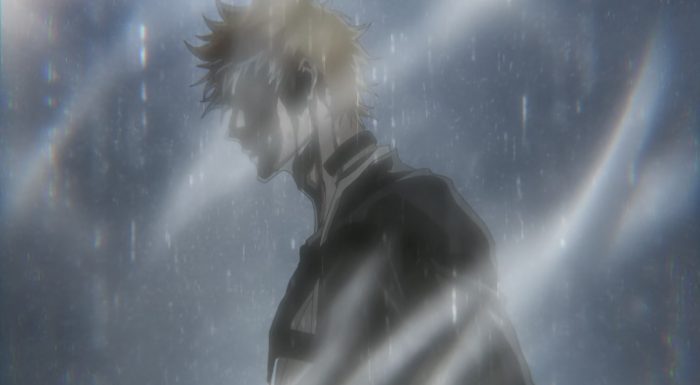 Wow…that was an episode. Seriously, Bleach deserves all the credit in the world for how amazing this return has been. The last two episodes especially have just been a fantastic ride. It’s not very often that I just want to applaud the effort put in by the anime staff behind a show, but that’s the case here. They really made the most of this episode and have set up a crazy conflict moving forward. The first assault by the Quincy nearly demolished the entire Soul Society. The costs and losses for the Soul Reapers is astronomical. There is a chance to regroup, but there’s no telling how long the Quincy need to head back to their base of operations for before they can attack again. 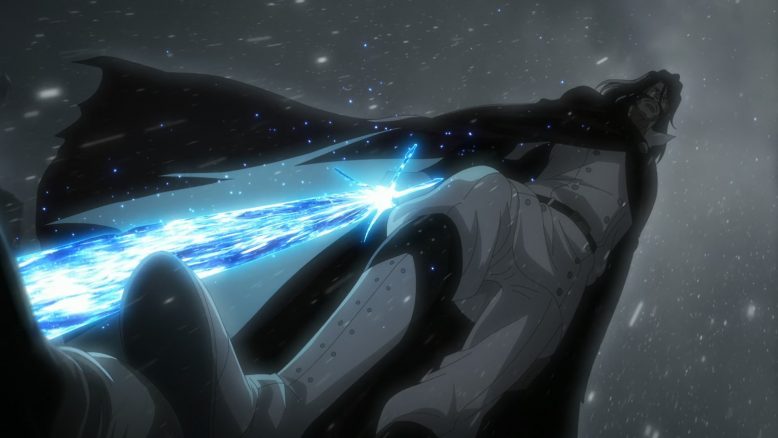 The new villain makes an impression

Yhwach if nothing else is showing how easy it’ll be to hate him. The shots he was throwing at Yamamoto after his death were cheap. Nothing screams “villain” like criticizing Yamamoto for caring about people and trying to protect humans. Which of these groups were supposed to be living humans again? Obviously, he has a grudge against Yamamoto and the other Soul Reapers, but that’s a classless criticism. Just makes Yamamoto more respectable that he was doing everything in his power to carry the weight of Soul Society and not burden the living.

There’s no question that he has a point in how he looked at history. After the victory over the Quincy, things changed. Soul Society went from a collection of brutal monsters to an organization that was fostering a culture, protecting people, and safeguarding souls. They had a greater view of the world and were trying to protect the balance. It’s not crazy to say that the overall power level of the Soul Reapers may be lower than in the past. I’m not sure though. The current ones were limited heavily by being unable to use their Bankai. Being less of a group of fighting maniacs played a role. But the difference here is that the Quincy were better prepared to attack than the Soul Reapers to defend. One side had a very potent weapon (Bankai stealing) and the other hadn’t had a chance to adapt to that. 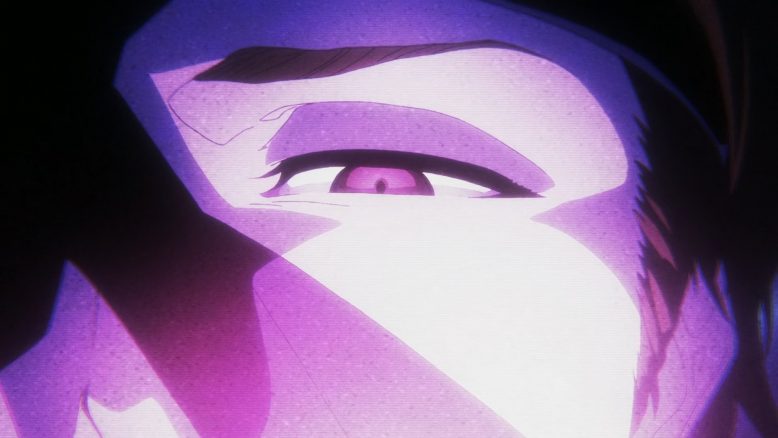 It’s just kind of funny that Yhwach busts out lines on the level of “I may not really be the villain here” after saying what he said to what was left of Yamamoto. He shot that dead body into paste and acts like he isn’t a bad guy? War is messy, fair enough. But he didn’t do much to make himself look like anything besides a threat to be defeated. I’m not saying he should be making friends with his enemies or anything, but this was a bit much. The man is utterly merciless and that goes for those that he forces to join him. The treatment of his Arrancar troops was horrific. He may consider true-born Quincy on a higher level, but he doesn’t seem to care that much about their individual deaths here.

Pretty fitting that he ended up getting played by Aizen. It wasn’t much, but it made a big difference. Aizen just messed with Yhwach’s perceptions enough to make him mistake how much time he had before they had to return to base. A little bit of harassment, but that left him unable to capture Ichigo. That of course will make all the difference down the road. After all, Ichigo can’t really work to surpass and defeat this guy if he’s held captive. 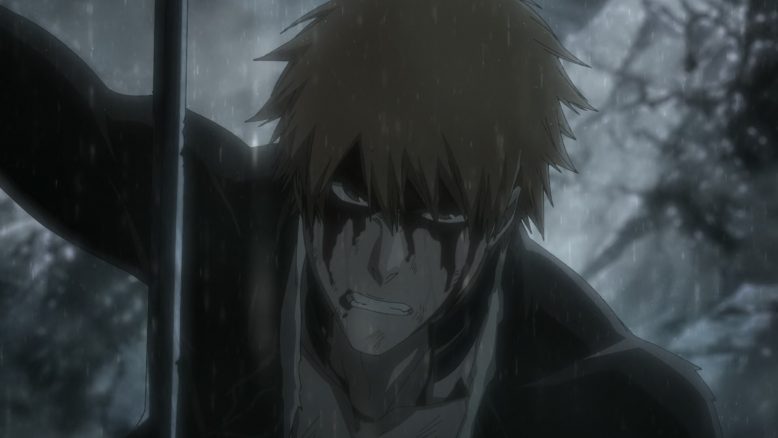 Ichigo gave his best effort. He wasn’t at his best and that’s obvious. Being trapped in that jail was downright torturous since he could sense how bad things were, but he couldn’t get there. So, he pushed himself to his limit again and again, trying to escape. It was that desperate effort that allowed him to make it there at all. But it did leave him mostly running on adrenaline and pure anger. Anger can take a person a good distance, but it doesn’t necessarily lead to the best fighting.

It was a pretty good fight all things considered. Ichigo really went after Yhwach with everything he could muster. Even when this guy proved to be extremely powerful, Ichigo didn’t back down. He did naturally get shaken up at points when he got stabbed or when Zangetsu was broken by Haschwalth. But I won’t say this is his worst defeat. Sorry to Yhwach, but Aizen’s stunt pulled against Ichigo in Soul Society surpasses that. Nothing is quite so offensive as stopping a guy in the middle of his theme song and cutting him down! This was just mildly rude by comparison. 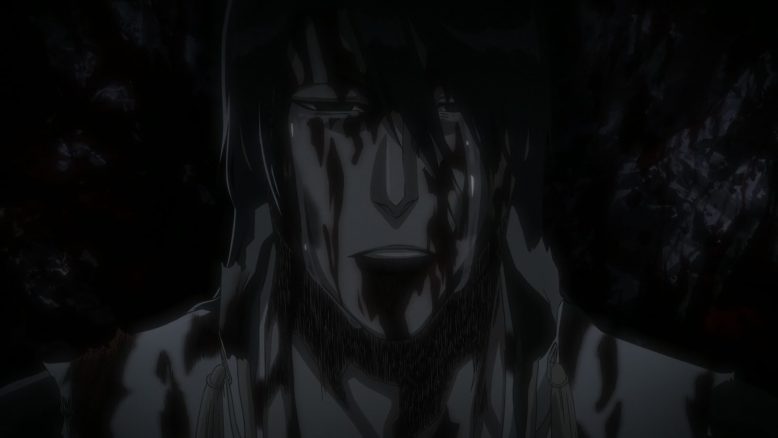 Tough seeing Byakuya in this state

Best moment may go to Ichigo seeing Byakuya. That was a speech by Byakuya. There is a class to Byakuya that few can match in the show. He did start off badly when we first met him. His obsession with rules and pride led to him trying to help execute the sister of the woman he loved. It was thanks to Ichigo that Byakuya grew, changed, and reached his current level. He was a great example of a Soul Reaper captain at that point and truly cared about his subordinates, his sister, and his home. He was already in unbelievable pain and clearly on death’s door. But he still dug deep with all of that in mind and asked for Ichigo’s help. This was a wonderful moment for Byakuya to show how far he had come and put his faith in someone else.

And it is fitting that nothing was said. Nothing needed to be said. Byakuya knew how Ichigo would respond, because that’s how Ichigo is. At his care, he’s a protector. Ichigo protects his friends, family, and those within his reach. His rage had boiled over at seeing such tragedy and he went straight after the source of it. Ichigo went through a lot to overcome Byakuya and stop him from killing Rukia. But that also just made seeing Byakuya in that state all the harder to endure. 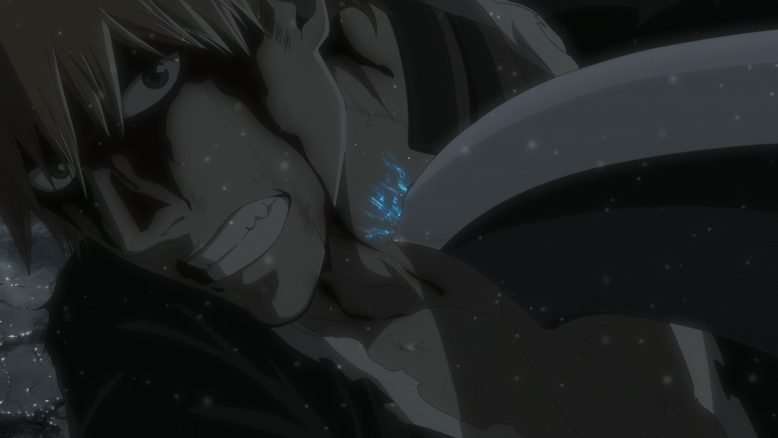 That power saved him this time

There were a lot of “what the” moments thrown into the conflict with Ichigo and Yhwach. One of the obvious things…is that Ichigo has a connection to the Quincy. I’ll treat the whole “my son” thing as symbolic or something. I don’t think we need to question Isshin as being Ichigo’s father. Ichigo has Soul Reaper powers inherent to him and that came from his father. But…Ichigo’s mother was brought into this. Kind of have to consider the possibility that she either was a Quincy or was just related to them. We know that Ishida’s family aren’t the only Quincy in the world. Ichigo showing the ability to use that Blut even without realizing shows that he’s got something going on in him.

And it kind of fits if that is the case. He has Soul Reaper powers, he’s had Hollow powers, and there is now the Quincy. That’s the third side that seemed to not be connected to Ichigo. And yet…here we are. Obviously, Ichigo isn’t quite in the mental headspace right now to think about his family or his origins. The aftermath of this massacre is going to be hard. And yet…there isn’t likely to be much time for rest. 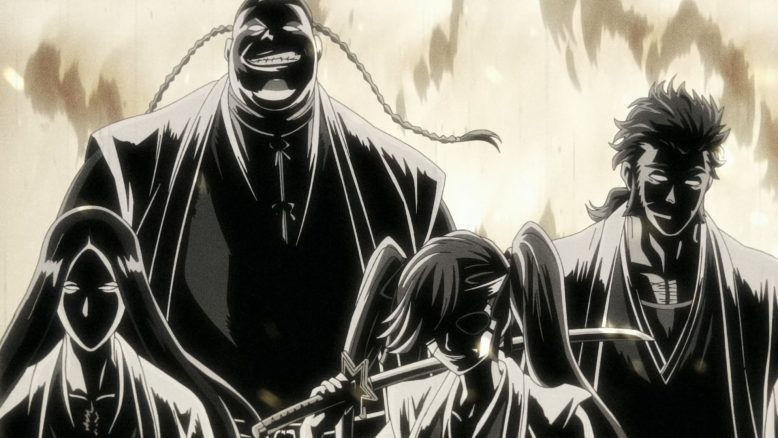 The original captains were intense!

Honestly the aftermath of all of this will be crazy. The Head Captain has been killed and that alone is brutal. But other captains like Byakuya may be dead. There are many injured captains in general and a few stolen Bankai. That’s to say nothing about the unbelievable amount of Soul Reapers that were slaughtered during all of this. It’s going to take a monumental effort for the Soul Reapers to just recover. And yet they need to do more than that. If they can’t both stop the Bankai stealing and get the stolen Bankai back…they are screwed. I don’t even need to mention that Yhwach still has Yamamoto’s insanely powerful Bankai. Ichigo and everyone will need to power the heck up if they are going to get through this. I’d say Inoue is going to be busy…but we don’t know if she’s even alright!