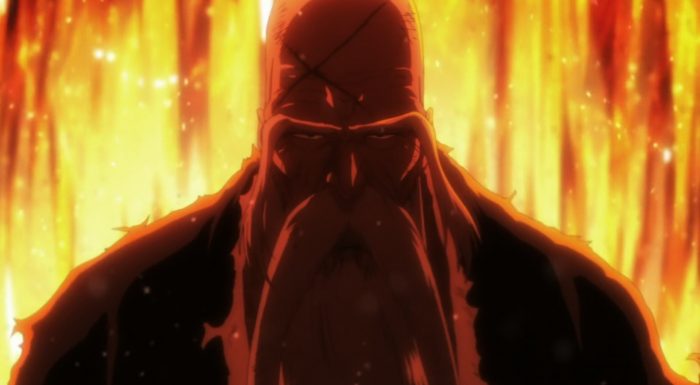 The slaughter just continues in this episode. There is a bit of hope, but clearly things aren’t going to go well here. We even got a nice flashback between Yamamoto and Sasakibe. Honestly, I’d be surprised if Yamamoto gets through the next episode in one piece. I could see him surviving, but I don’t know. If he had stuck to flying around and taking out the various Stern Ritter I think that would have been a more effective strategy. He can apparently handle those guys even with stolen bankai. But Yhwach (wow I’ll need time to memorize this one) is probably beyond what he can deal with right now. Especially if he can’t use his bankai. I mean maybe this guy will be so confident that he won’t even try to take Yamamoto’s bankai, but who knows. 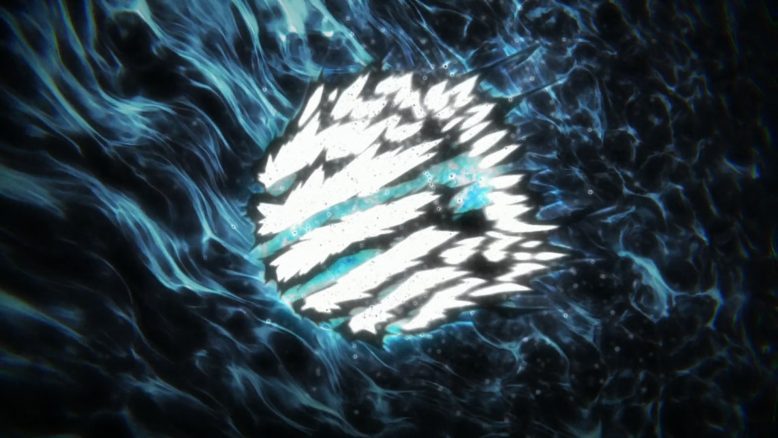 Ichigo is not happy!

What a terrible situation for Ichigo though. Poor guy is in a personal hell right now. He can’t get through that trap and yet he knows how bad things are getting over there. I guess it reflects how powerful Yhwach is that he can give Opie a power that is stronger than the man himself. Even with all that he absorbed in Hueco Mundo he wasn’t able to keep up with Ichigo’s bankai. But that jail power is enough to seal him up even with Ichigo using the full power of his bankai. I hope that scene near the end was him finding a way to pull out enough power to punch through that jail, but I don’t know. Ichigo needs to get there fast before it is too late. But I have a feeling he’ll only arrive after it is too late. 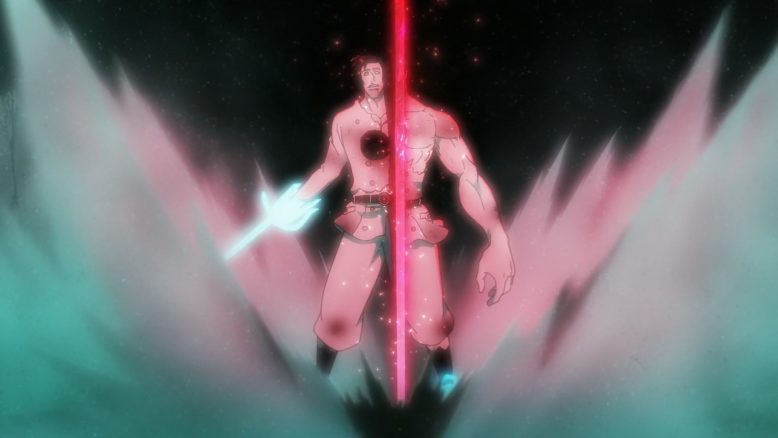 Who the heck did that?

It does make me wonder who the heck took down Opie though. It was someone of decent strength considering he one-shot that guy. So I don’t think lower level Arrancar can be the answer. And I’m not sure there are any Espada that I can immediately think of that would still be hanging around there. Nel didn’t look ready to transform to her old self. And the weird thing is that this person also drew a sword on Urahara. Maybe Ichigo’s father showed up? But I don’t think he’d draw a sword on Urahara. Honestly, I have no idea who that might be. Hopefully they are just messing with Urahara since that group really doesn’t need to replace one major enemy with another. 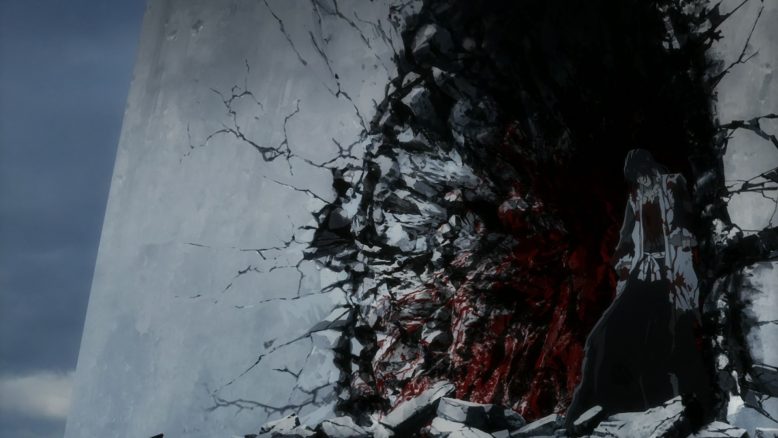 This was a brutal outing for Byakuya. I’m sure he’ll get back into the fight later in the arc, but I think he’s truly done for now. Until they can get him his bankai back…and heal his wounds he won’t be getting back up. He took some brutal hits here. I respect him fighting as hard as he could for as long as he could. He tried everything possible to get information and pull back the curtain of that creepy guy’s ability. But there’s just no way he can beat his own bankai like that. And unfortunately, Renji couldn’t do that much either. He was up against someone that stole his captain’s bankai. Even if Yamamoto wasn’t kidding and the stolen bankai aren’t as powerful…that’s still a hard bar to clear. Even if he could safely use his own bankai!

One interesting thing is that it sounds like shikai is still on the table for those that lost their bankai. We didn’t see anyone using them after they were stolen, but if the enemy thinks that’s possible then I choose not to disregard it. That doesn’t undo the power gap, but it at least makes things a bit less hopeless. Not for those fighting after having their bankai stolen though since they are up against those that stole them! If they must fight their own bankai then it won’t end well. It probably is as painful physically as it is psychologically to face their own bankai like that. 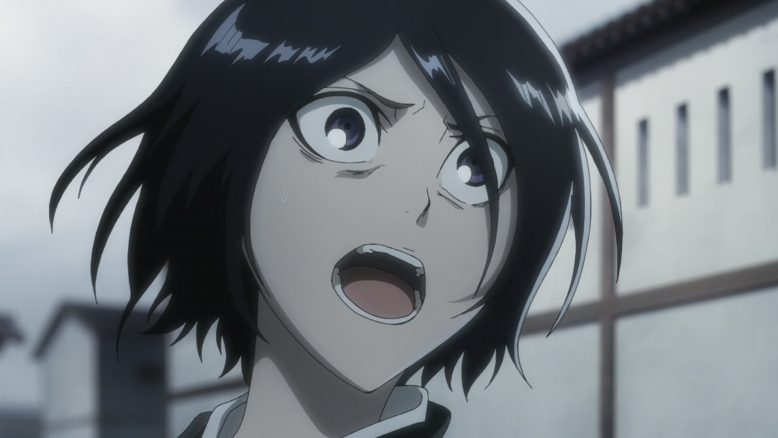 I can’t blame her for going

I hope Rukia is alright. She took a nasty hit there while trying to go check on Byakuya. It was a risky move to turn away from the person she was fighting. But I also get it. Her family matters to her and sometimes you can’t make the most rational choices in moments like that. I’m sure her opponent will get what she’s got coming to her later.

I only wish we got to see Kenpachi against Yhwach a bit. I get that they wanted to save showing off this guy fighting for someone like Yamamoto though. I’m sure Kenpachi gave his all and had a good time. At least we also got to see him quickly crush his other opponents. The guy really enjoys himself and puts all he has into battles. He really does have a steel trap of a mind when it comes to fighting and doesn’t let strange abilities slow him down. When it comes to taking down his enemies, he just gets right to it. Now maybe these weren’t the best of the best when it comes to Yhwach’s forces, but they were probably more than powerful enough. 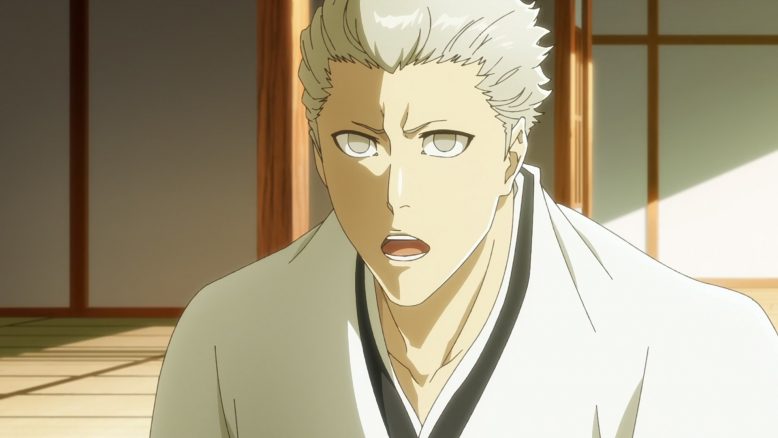 Sasakibe was a cool guy

Loved the little flashback for Yamamoto. It just shows how important his vice-captain was. There’s a good reason the guy never advanced to Captain. He was really dedicated to supporting Yamamoto and never limiting himself towards that cause. I like that he never trained under him because he wanted to have a fighting style that complimented and covered for Yamamoto instead of just being an imitation of his own style. And I loved seeing Yamamoto just wreck that guy using his old friend’s bankai. He just took that hit, shrugged off how weak it was compared to the one he remembered and burned that guy alive. And I can’t blame him since he was just asking for it. 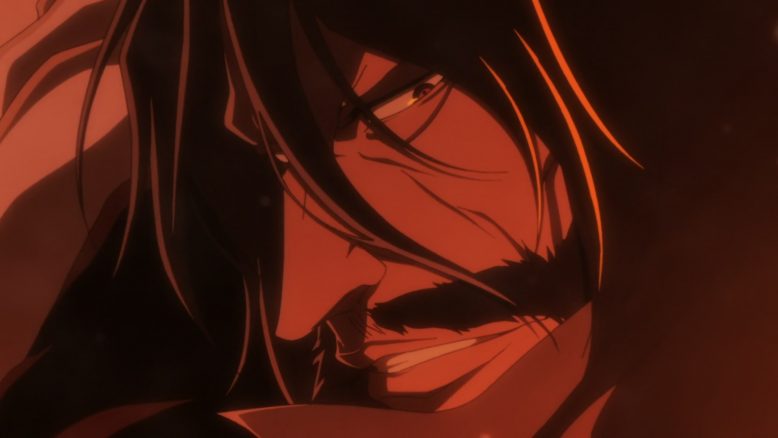 Let’s see what this guy can do!

This episode had some great little moments. There was stuff hard to watch like Byakuya getting psychologically attacked like that. But there were great moments like Yamamoto taking the field and giving his Captains the will to fight. Of course, if he loses then that might fail them. But at least he’s given them a jump start. Hopefully Ichigo can get out of that trap. They really need him out there to turn the tide a bit. At least Yamamoto is ready to finish the fight he started. And that guy shouldn’t be able to talk so much trash against someone like the Head Captain. Not to say he won’t, since Yhwach does look extremely confident.