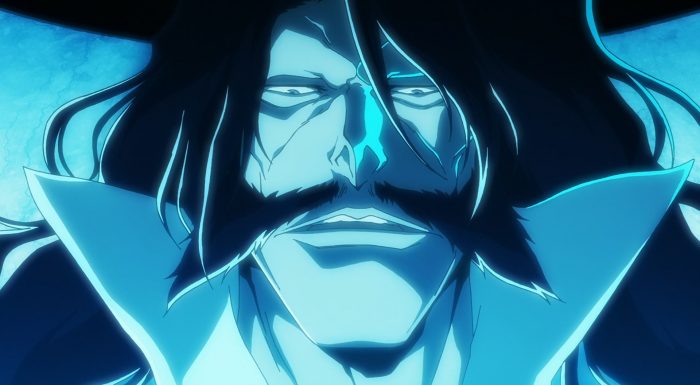 It was already clear from the first episode, but this show is just going to be amazing. The second episode was plenty strong even with it naturally having to spend time dealing with the aftermath of what just happened. And we’re not exactly slowing down here. The threat level is through the roof and the main cast are only just starting to get a feel for it. I’m still hoping that Sasakibe still managed to get across the danger when it comes to using bankai against these guys. He ended up dying, but I choose to think that he’d make sure to get those last words out. It wasn’t part of the overall broadcast, but it wouldn’t need to be. There are only so many people that can use bankai and those people can just be told directly. 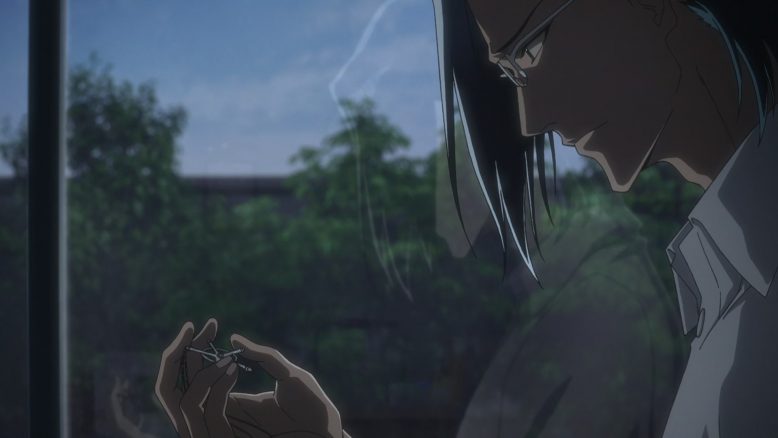 You know Ishida will have an interesting part of this story

On one hand it did seem safe to say that the enemy were Quincy. The bow, the hollow lure, and everything about them screamed Quincy. But I was surprised that Ebern was an Arrancar. I would have thought with his reaction last week that he wasn’t one, but Ichigo (and Ishida) got it right. Maybe he was pissed off thinking about his people being enslaved or that no matter how much he dresses up that he can’t hide what he is. Either way, it is only further cemented that the Quincy will be taking center stage here.

It should make for a good inner conflict for Ishida. He and his father have been detached from whatever this group is for most of their lives. But I wouldn’t be surprised if they reach out. The scary thing is figuring out how they got so much stronger than Ishida. Ishida isn’t a weakling, but he wasn’t exactly on the pure power level of the Espada. He had to be clever and even then, he could only do so much. 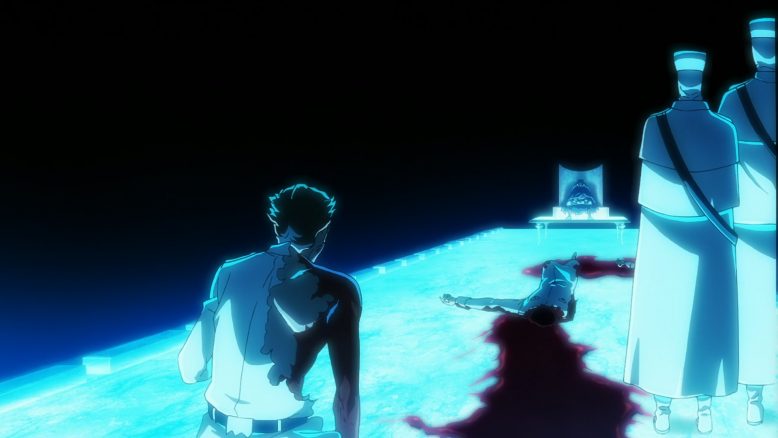 Holy smokes though. This replacement for Aizen as the big bad is absolutely nuts. I was starting to think “stop killing your subordinates” before they were revealed as Arrancar. Not that it is ok. But at least on some level it makes sense. They have zero respect for Hollows or Arrancar, so casually chopping them up or killing them isn’t worth a second thought. That is showed by how there is zero fear in his other subordinates questioning him even after seeing him blowing people’s heads off. This guy really does need to calm the heck down. He clearly is just looking for excuses to kill these guys. Which makes me wonder why he’s even bothering to use Arrancar as foot soldiers. I can’t imagine they have to spend much time training them, but it still seems like a waste since they aren’t weaklings.

If nothing else, it is establishing the threat level. Ichigo and company haven’t truly fought against one of the Wandenreich yet. Anyone that has fought them (Hollow or Soul Reaper) have been brutally killed. That just makes the lead to the next episode all the better. We’re finally going to get a feel for how powerful these guys are. Halibel getting destroyed by their boss does set the higher limits a bit, but we must see how the general soldiers play out. I would not be shocked if this guy is at Ichigo’s level or even above it. It wouldn’t be against expectations to have them pose a threat that forces the main cast to seek a power up early. The only win so far is that it seems like they can’t steal/seal/destroy Ichigo’s bankai. 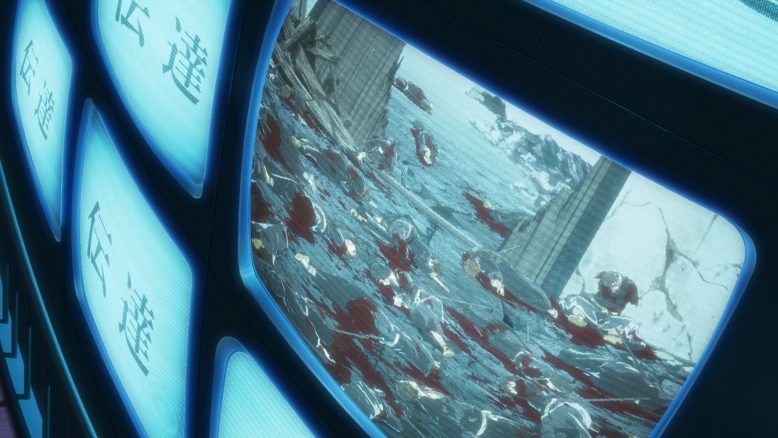 The body count is steadily rising…

The war really has begun, and the casualties are staggering even at this stage. Over a hundred Soul Reapers are already dead. Yes, these guys are general troops that aren’t remotely strong enough to face off against Captain-level threats. But that’s an absolute massacre. And it also leaves all their general troops at risk. With the Wandenreich able to just show up wherever they please it means anyone can be attacked at any time. They do seem to be taking a slower approach with Soul Society in general, but they clearly intend to slaughter all of them. I doubt the funeral we saw in this episode will be the last of it.

It isn’t just the Soul Reapers at risk though. Hueco Mundo is an absolute disaster zone. Not surprising that Quincy would be gunning for the Hollows harder than anyone. But it is still horrific. They are killing anyone that they can and taking a handful to be used as disposal fodder by the Wandenreich. Even these Arrancar aren’t going to last very long. The ones that were the most loyal and well behaved still got their heads blown off for the most minor of offenses. None are intended to live and I’m sure that’s the case for Halibel. I’m not sure what they plan on doing with her. She’s too proud to willingly serve as a soldier. But maybe they intend to use her as a hostage to make the Arrancar behave? 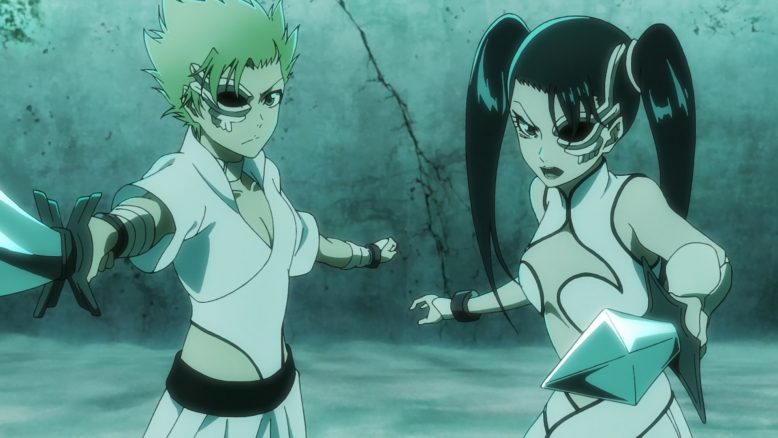 I did enjoy seeing some familiar faces. Nelliel, Halibel, Loly and Menoly were all good to see again. Obviously, most of them were enemies but it was still nice. Unfortunately, Halibel’s followers couldn’t handle their opponent. They could take care of the general weak troops for the Wandenreich, but their leader was too much. Not that I can blame them for trying though. Their home has been ransacked and their people slaughtered or turned into slaves. There’s no way they can just sit around and hope for the best in this situation. Thankfully Ichigo has arrived in time that most of the named Arrancar will be alright. And if Nel can step up then they should manage. It just depends on if Ichigo can handle this guy or not. 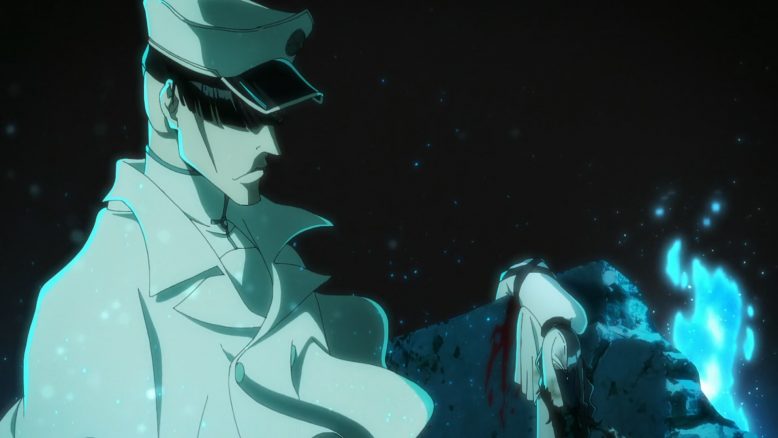 Let’s see what this creep can do.

Another good episode this week. This one was less on pure nostalgic hype and mostly just moved the story ahead. We’re still getting quite a bit of action even with it being more of a story episode. I can’t wait to see how things are going to play out. The fight coming up should be amazing, especially with backup on Ichigo’s heels. Urahara must have something in mind for not only helping Ichigo get to Heuco Mundo but to go along himself. Bleach isn’t disappointing so far!