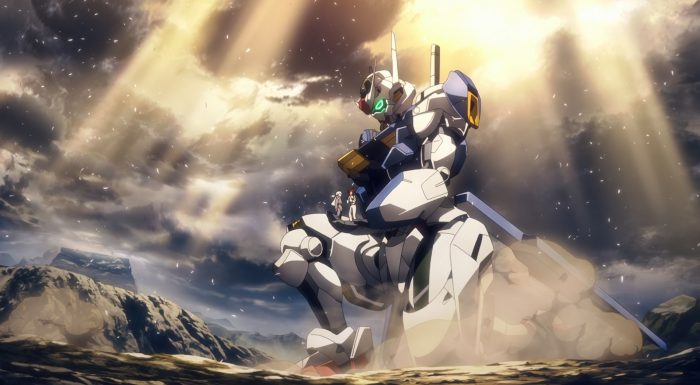 It’s always awkward when the protagonist was a great deal cooler as a small child than as a teenager. I’d like to make that sound better, but that’s how it is coming out of this first episode. Suletta is awkward. There’s no getting around that. I’m sure that everyone gets where they are going with this and what direction her character should develop. Knowing how things will likely play out though, doesn’t make the initial steps of that journey particularly fun. I can empathize with those that are socially awkward. But that realism doesn’t make the protagonist immediately interesting. The battle will be for the show to pay off that character choice in a way that moves along fast enough to not be annoying, but not so fast that it feels pointlessly rushed. 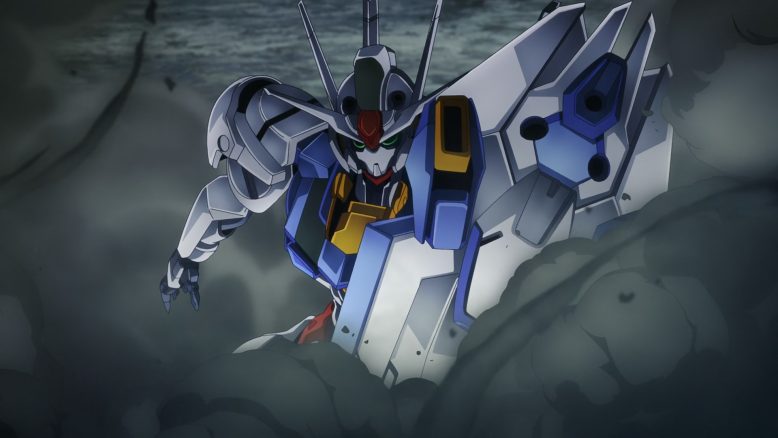 Pretty good for a machine that should be outdated

There are interesting elements to things like Suletta being raised with “Aerial.” It is possible for the girl to treat her Gundam like family that she was raised with. That would hit harder because she might have been raised with few other humans around. Aerial had to be family since that was about all she had going for her. So it’ll be interesting to see how things play out with Suletta and her Gundam as the story goes along. Taking serious hits means her family is taking hits. But beyond that, if people start going after her Gundam to destroy it then it really becomes a personal attack.

It also hits home how the move to destroy all the Gundams basically stagnated mobile suit development in that setting. Aerial is an ancient mobile suit in a sense. Most Gundams I’ve seen show up were made within a few years of the current conflict. Technology should advance fast and a suit that’s over 10 years old should be a serious step behind. But because technological advancement was intentionally ignored for various reasons, that would create the possibility for Aerial to still be the most advanced suit out there. 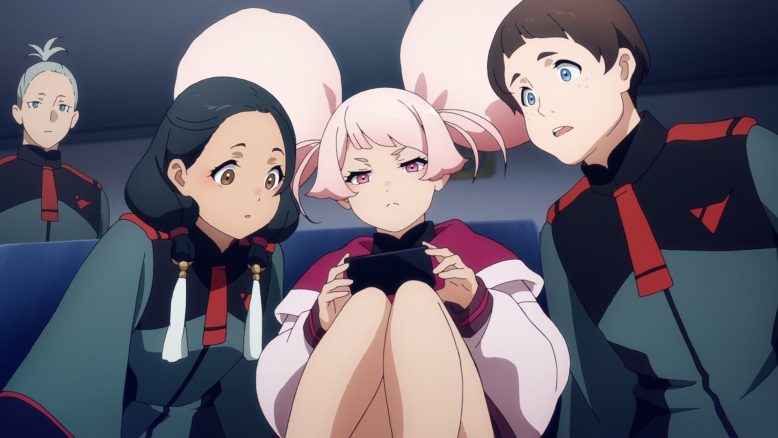 Off to mobile suit school they go!

The school setting is a bit weird. In general, I get anime setting things up in schools and it isn’t like Gundam pilots haven’t attended schools. But this setup feels a bit weird still. I mean Suletta’s father, and his coworkers were slaughtered because of this technology. What is her mother thinking? She must know that people will almost immediately recognize the Gundam for what it is. If people were willing to kill over that thing then it’s safe to presume that they’ll continue doing so! I get that her daughter is good and that the Gundam is strong. But Suletta is still human. If they lock her in a room and blow up her mobile suit that’s game over! What is even the plan here? 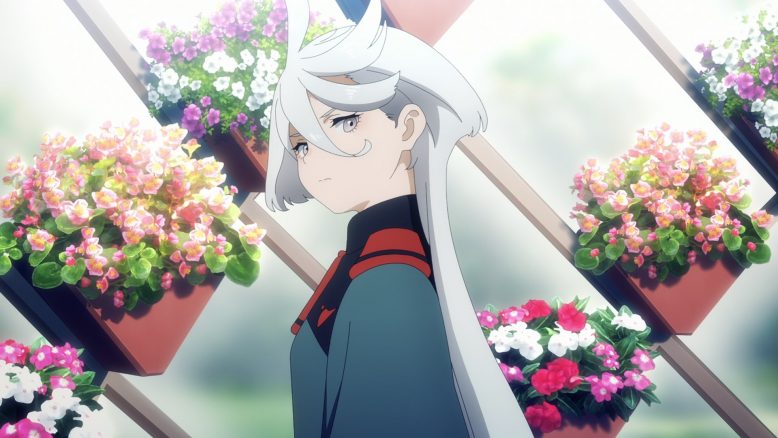 She did surprise me

I will say that Miorine surprised me. Mostly in that she was less useful than I expected XD. With all her talk and snappy attitude I figured she was hiding some legitimate skills. Now to be fair, the ability to garden is still a legitimate skill! I’m not a master at growing plants. But man, she really is just a rich girl at heart. She just kind of does things and the results fall wherever they may. What was her grand escape plan to start the episode? Just float in space and hope for the best? Then she jumps into someone’s mobile suit to fight when she has no clue what she’s doing. And that’s even when said person is going to be expelled if she loses! Is this girl out of her mind?

At least she’s cute and is perfectly open to marrying any gender. Her previous…future groom was certainly a jerk. And it is a shame that she’s basically being treated like a trophy. Not everyone can be good at everything. And unfortunately, her future is specifically tied to whoever the top pilot of that school is. I do feel for her in that her life is outside of her control. But can she at least not get other people kicked out of school while trying to take charge of her life? 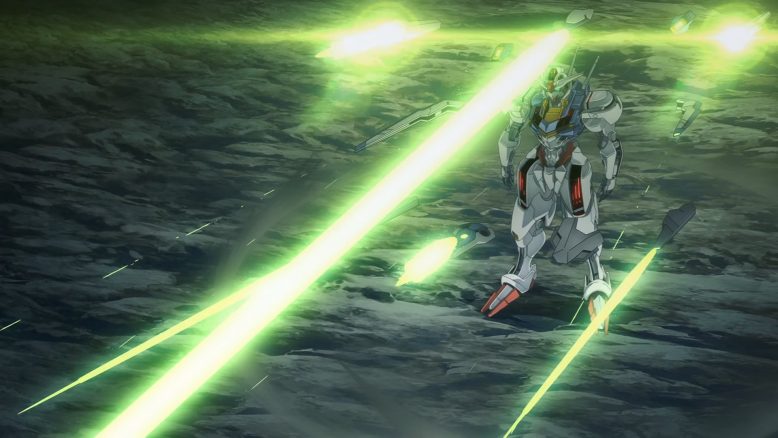 Best part of this episode

If there’s anything that will carry this show it is the action. The visuals and the music when Suletta did utterly crush that guy was great. They didn’t just bring back beams, but beam spam and funnels! So if nothing else the show should look great! If the characters can just step up a bit, then the series should be just fine. Of course, we haven’t even seen Aerial be really tested in battle outside of that brief battle in the prologue. And in this fight, it basically just stood around and let the funnels clean up. That’s possibly because an extra person was in the cockpit and racing around would be dangerous. But at the very least I think we could get some great fights out of this show. 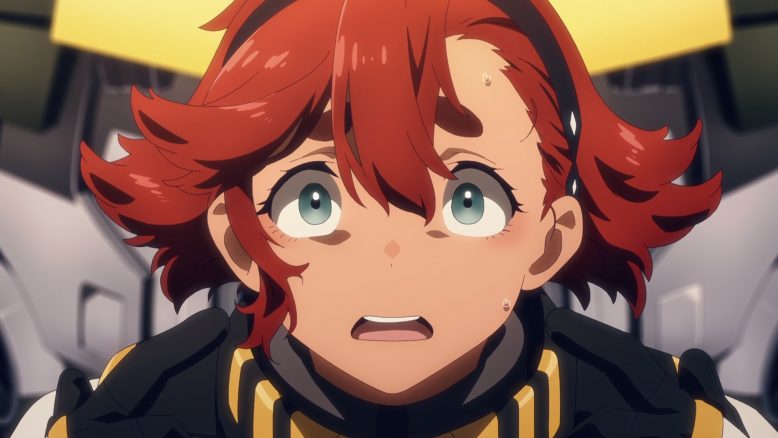 The question now is whether this show can live up to its potential. I suppose the other question is how many episodes this will be…The only confirmation we have now is that it will be a split cour with the second part airing in Spring. But Gundam is usually a 50-episode series so that’s not enough. Either they are going to announce the second half of the show during that second cour or they aren’t confident enough in this show and have only secured 25-ish episodes for it. It would be a shame if they were holding back with this one. But I guess we’ll find out what the plan is down the road. For now I’ll say the official first episode wasn’t amazing, but it has potential.

in Mobile Suit Gundam: The Witch from Mercury