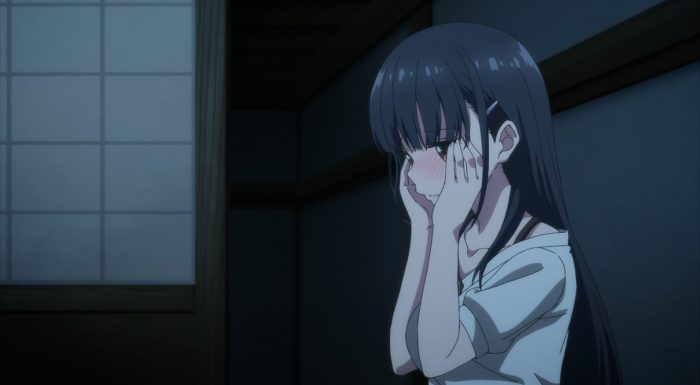 It seems the last episodes are really going to focus down on the main pair and work through some of their issues before we wrap things up. Of course, with the trip I knew the side characters would likely have a minimal role, but they really are just gone right now. Maybe the story will come back to their new home by the end and those characters can show up in the last episode. But I’m fine with this. The main characters are the reason that I felt like writing about this show in the first place. So, I’m all for really spending time with them and delving into what makes them tick and letting them process what they’ve been through together. 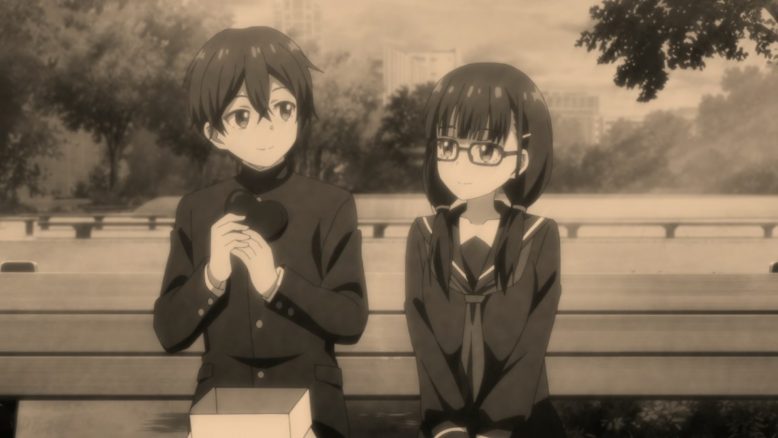 Not sure that these two had many friends…

So far, no one has shown up that knows they were dating. So, the bombshell is safe for the time being. It’s a win that Mizuto was such an isolated kid that he wouldn’t have introduced his girlfriend to his family or relatives. So all is well there. But there’s still a chance they run into classmates too. It might not be as big a risk as I might imagine though. Mizuto and Yume were basically loners as far as I can tell. There doesn’t seem to be any push for them to contact any friends they had out there so they might not be noticed. And Yume did have her highschool debut imagine change so people might not recognize her at all even if they knew these two were dating. While she has the same first name that’s about all they’d have to go on. 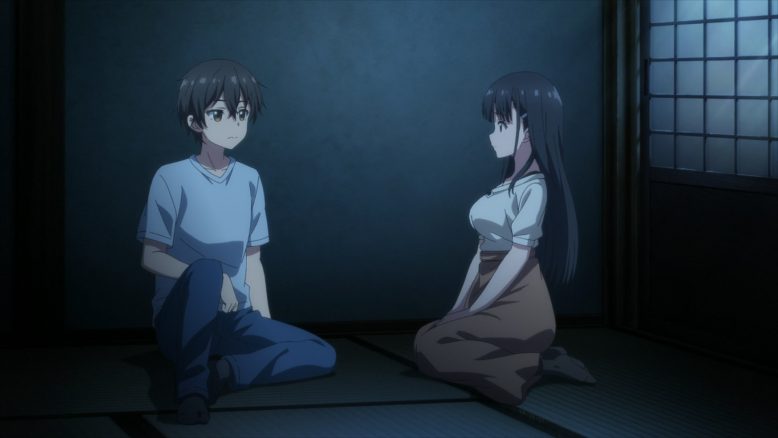 It’s good to work things out a bit

This really was an episode for Yume to work through her own regrets. Since Mizuto handled them breaking up, it wasn’t like she had to really process it. She could just take in the immediate relief of their strained relationship finally being over. But she really is the type to invalidate her own feelings, so she never did tackle the reality that she didn’t want to break up. There was nothing but regrets in terms of letting that gap between them grow, not spending time with him for holidays, and not saying that she didn’t want them to break up. Now that wouldn’t necessarily stop them from breaking up. A relationship requires two parties to maintain and if one wants out that should end the whole thing. Yume did regret not speaking up when she had the chance.

While all she did was basically cry without saying much of anything, at least Mizuto was there to handle it. The guy may have flaws, but he’s also a good person. He knows that whatever is going on with Yume that she needed someone to be there for her. And he has taken it onto himself to look out for her even if they don’t have the relationship status they used to. 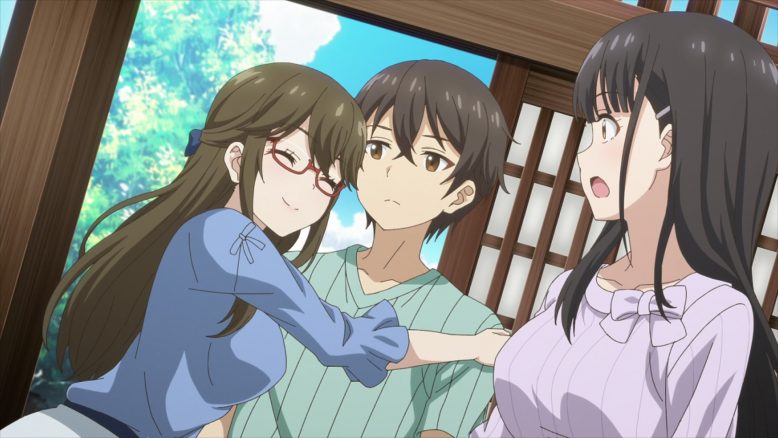 At least this got cleared up quickly

The good thing at least was that Yume did at least get to bring up her concerns over his first love. Naturally it was her and she just didn’t realize it. Honestly, I didn’t immediately get it either since she didn’t seem to be laughing it up that much during the flashbacks. But she did laugh at times so I kind of get it. Mizuto enjoyed her smiles, laughs, and those times were the ones that stuck in his memory. It doesn’t change that their relationship ended, but it was a nice thing for Yume to learn. At least she doesn’t have to feel awkward around Madoka anymore. She…will just continue feeling awkward around Mizuto XD.

And at least someone around has noticed her being in love with him. I suppose you can argue that the other former couple of the show have noticed things, but I kind of wonder about that. Anyways, it’s kind of nice for Yume to have someone in her corner here. I guess the fact that they aren’t remotely related has left her not feeling like there’s even any need to acknowledge that siblings dating would be a bit…unusual. Of course, that girl has a lot of amusement to deal with since obviously one of Mizuto’s cousins also has a crush on Yume. That kid can get in line though since I’m sure he’s not the only one and has as little a shot as most of them. 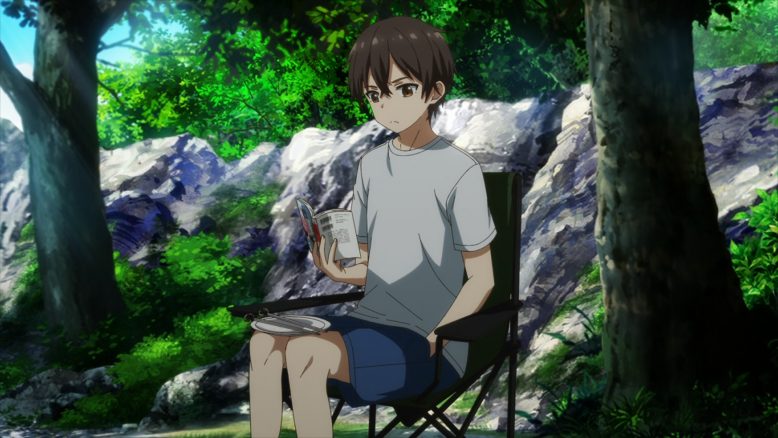 We even got a nice little moment with Mizuto revealing the book that really influenced his whole life. It’s just an autobiography that really meant something to him since he had to work to understand it and read it. Plus, it was obviously an emotional life story considering both the past Mizuto…and present-day Yume both cried on the same page! That guy must have had a way with words to hit them both that hard in the same way. Also, it is kind of funny that the second Yume started to cry I did want to warn the character not to cry on the book. And then she did! That book is a connection they can share on top of the other connections between them. 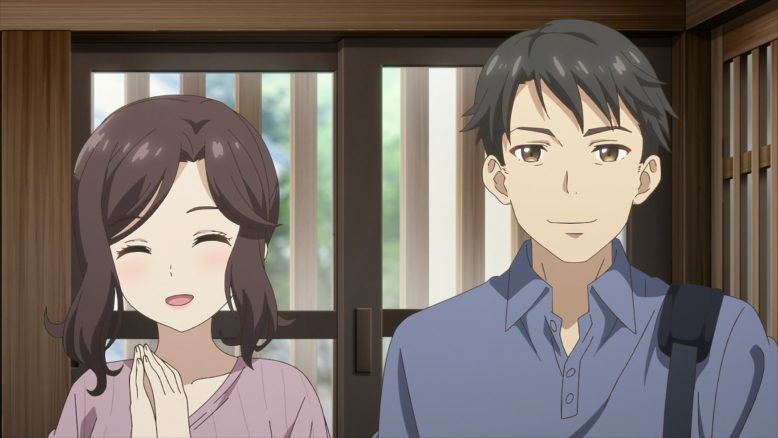 I wonder if these two will ever suspect anything?

In the end, I thought this was a pretty good episode. Some people may not like Yume so I can imagine they didn’t care as much for this one. But Mizuto and Yume for me are the reasons I’m sticking with this story until the end. So, an episode that focused heavily on them was right up my alley. Now we can see what else will happen before the show runs out of runway. But it is nice having the show delivering some solid episodes right before the end.