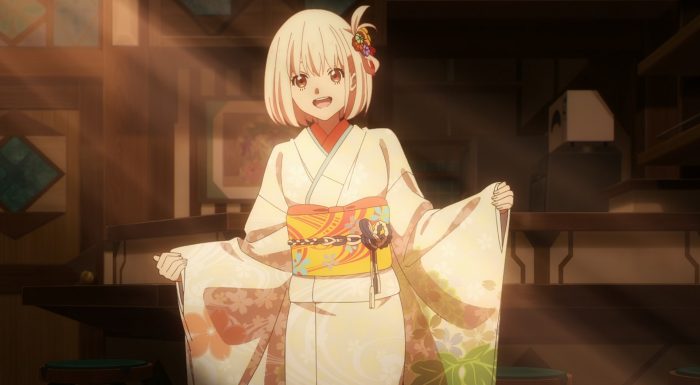 We are in it now. Majima has made his move, Takina is making her moves, and Chisato is set to step on the field. I still have no idea how this is going to play out. But it is bound to both be messy and emotional. Things are set to get chaotic and it’ll be tough to keep the loss of life to a minimum. But the biggest worry is still about Chisato and whether she’ll get out of this alive. Her survival odds are hard to gauge right now, but there is still some hope that she’ll bounce back from all this. If nothing else I do hope she meets up with Takina soon. I get that they had to deal with things apart for this episode, but the show is at its best when they are together. 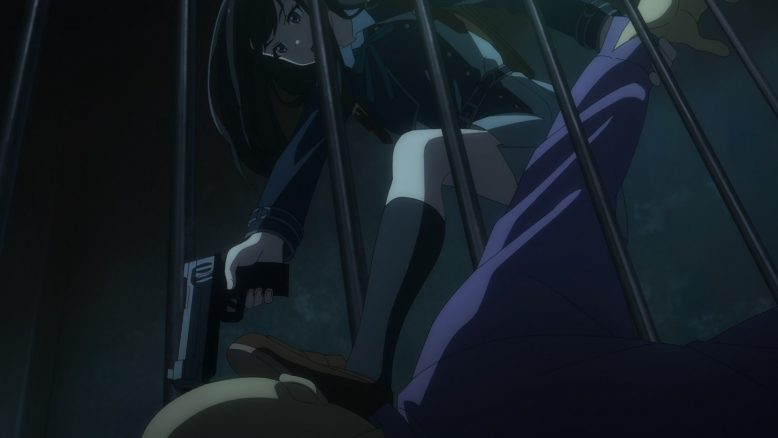 There was something truly funny about Majima and Takina sort of facing off. The best part was how they were clear about not being interested in each other. Both of them are rivals for Chisato’s attention and having different objectives at play right now. I kind of wonder if they will have another chance to clash or not? It’s definitely possible since Majima has made his move and Takina is desperate to get her hands on Shinji. The only hope she’s got to save Chisato is to get that guy to cough up another artificial heart. You can imagine that she’ll get even more desperate as things go on. Majima has the world’s biggest bullseye on his back and he can’t say anything if he’s dead.

Equally fun though was Takina doing her interrogation bit. It feels like Chisato has rubbed off on her in the best of ways. She was practically having fun messing with the captive with talking about how she was fired for killing too many and wouldn’t mind being fired again XD. She used her head to get the information she needed. The moment also came with cool little visuals like standing in the shadows to start and then looking down on that guy after she baited him and brought him down. Definitely pushing things to the limit in terms of interrogating on her own. But considering the shadiness of the DA in the first place…it’s probably best to do investigation without their approval. 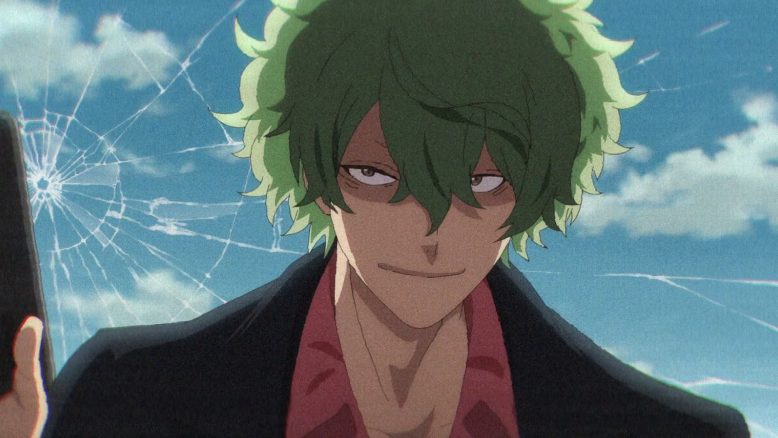 Not a bad plan

And naturally things are getting intense now. Majima has gone full Joker with his plan to scatter guns all over. A point has been made that Majima took too many guns for the number of followers that he has. The man doesn’t exactly have an army. But if his point was to try to create chaos then scattering guns all over the place is a good move. Giving civilians free access to weapons after creating some tension with his speech is effective. All it needs is a few stupid people and/or corrupt civilians and things will go nuts in a hurry. And the worst thing is that his move was also intending to draw the Lycoris into the spotlight. It’s going to be hard for them to both go after Majima and deal with the chaos. The challenge is even higher to do those things while staying under the radar.

The best thing for him is that his plan has layers. If the Lycoris go after the people with guns it will be near impossible to hide that. And even if they try, people are going to think after hearing that speech. If they don’t do anything then the peace is at least shattered and people realize their country isn’t any safer than any other. And he doesn’t even need everyone to go messing around with the guns. It just takes a few bad people, a few nervous cops, people thinking they are toys, etc. 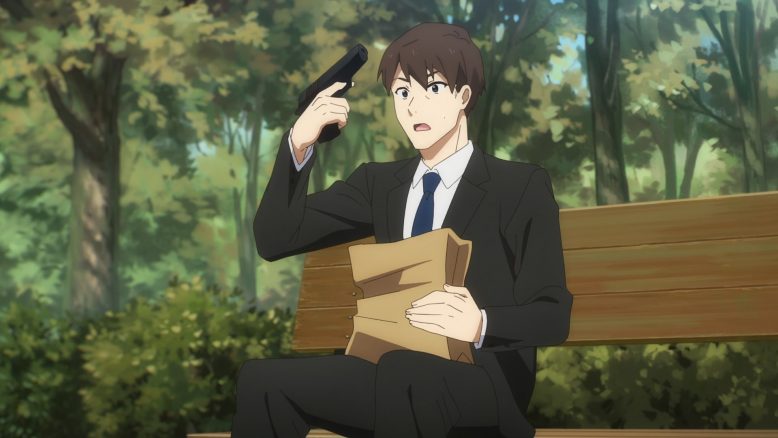 When in doubt…ignore strange bags!

Majima certainly knows how to handle himself. He didn’t have much trouble verbally sparing with the Lycoris and then dealing with the public. The man is just chaos itself and if he gets away again then the costs could get even higher. I get to a degree that he doesn’t care for how the bad things are being swept under the rug. It isn’t like Japan is at peace without issues, it just looks that way. I also kind of get the approach being taken. How many people haven’t turned to crime since they just aren’t exposed to any? Seeing the world around them at peace might help people stick to it.

Not that it matters since Majima’s plan isn’t likely to completely fail at this point. No surprise that “someone” is pushing the DA to put Chisato into the action. I presume that old guy is part of the Alan Institute and they really are pulling the strings behind the DA. And that just makes working with the DA all the more troublesome. I don’t think that Takina is in danger with them, but I hope she keeps her guard up. 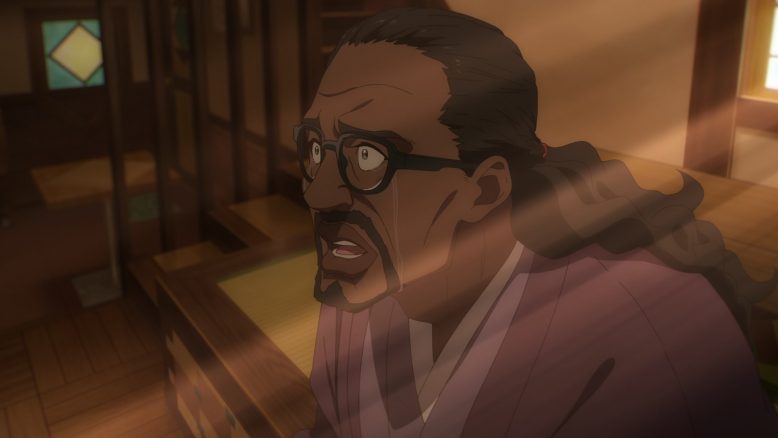 Mika has had a tough time in this show.

Things are getting heavy in terms of emotions. Chisato shutting down their café with the full expectation that she doesn’t have long to live. Mizuki and Kurumi were basically sent off to do…whatever. I kind of feel bad for the both of them. They just get dropped with a kind eviction notice and have to figure out their paths from here on out. That hurts all the more with them having been super active in trying to track down Shinji and digging for information about that artificial heart. I’m sure this chaos will keep them from going. But I am happy that they still kept faith in Takina who they know hasn’t given up.

And it was about time for Mika and Chisato to have a good chat. He did need to explain that Shinji wasn’t some pure savior. The both of them intended to have Chisato raised into being a killer that would last until the end of her Lycoris career. Mika lost his edge and gave up on that pretty fast. But in the end, they did consider her a weapon and were ready to turn her into one. What Mika did give Chisato was choice and freedom to act. And Chisato chose her path. Even though she completely misunderstood Shinji, she at least chose her own path without being pushed towards it. 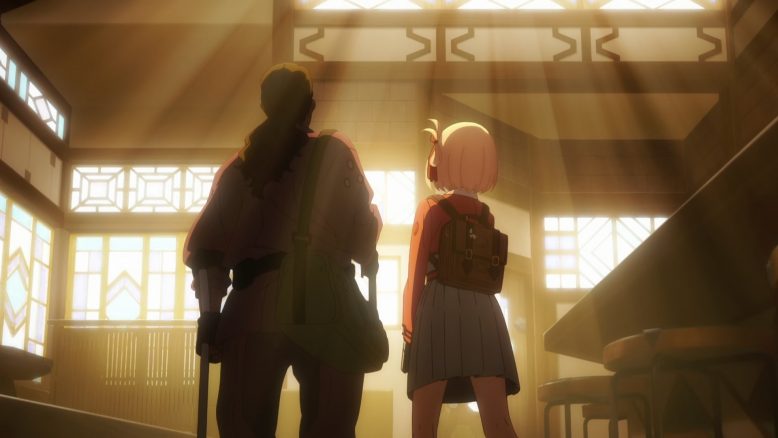 Definitely a sweet moment though with Chisato acknowledging those two as her fathers. Of course, that only makes things increasingly tragic with one of those parents trying to turn her into a killer. But in that sense I get a bit of hope from this. If Shinji can clue in and respect Chisato’s own path in the world then maybe he’ll actually help save his daughter’s life. The guy has to have a new artificial heart. All that remains to be seen is if he’s willing and able to help save her life once again. Not that I’m sure that Shinji himself will survive. The guy has helped cause a lot of harm in the world.

The best thing is that Chisato and Mika are going off to get Shinji. Between the two of them they can definitely manage to deal with whatever situation they are up against. The only question is whether they can break this guy’s obsessive belief in the Alan Institute. As things stand, he’s more than willing to sabotage Chisato’s heart and refuse to tell Majima what he wants to know. The latter is something that could easily get him killed. 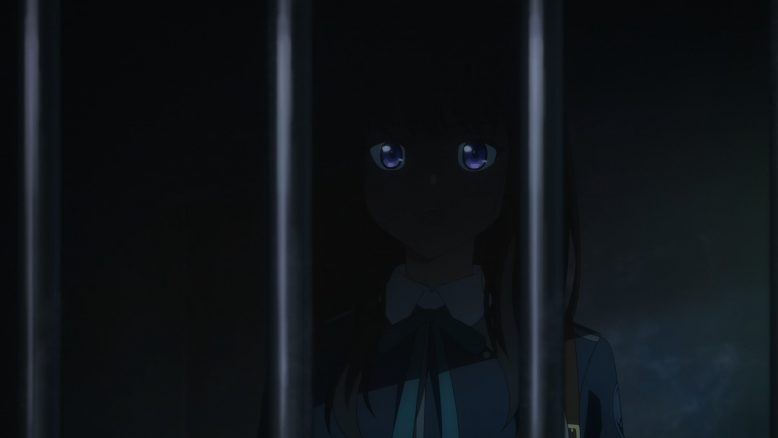 Majima and get her hands on Shinji. And of course, you know Kurumi and company will all get involved. Heck, I wouldn’t be shocked if Mika gets involved in all this action even with his leg in the state it is in. It makes me wonder what the end state of this show will be. Will the Lycoris be revealed to the public? The state of the country in that state could be pretty chaotic. Will Chisato live or not? That’s the biggest question left for this series. It could end with smiles or with grief. I hope for Takina and Chisato that they’ll get through this just fine.