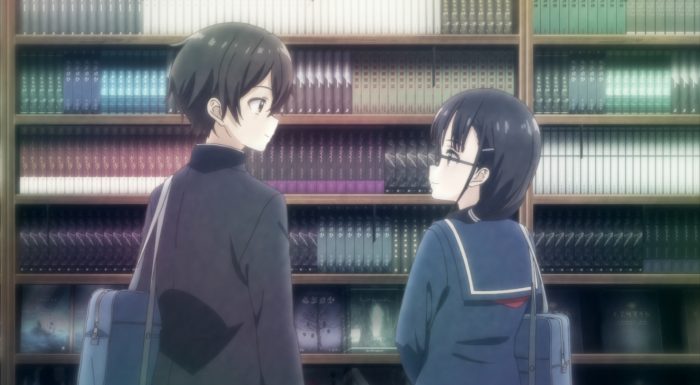 The way this episode ended might have been the most interesting part about it. Mizuto’s feelings about his past and his relationship with Yume created an interesting feeling for me. With an old relationship there is obviously a mixture of feelings when it comes to the present status. Whether things are ok or absolutely terrible it’s easy to just focus on that present state. I just found it interesting having him sound almost envious about his own relationship with Isana. He definitely makes it sound like he wishes he could have that kind of friendship with Yume that he has with her. There’s a tinge of regret not only because the relationship didn’t work out, but also because it cuts off the idea of them just having remained friends. That moment just really worked for me. 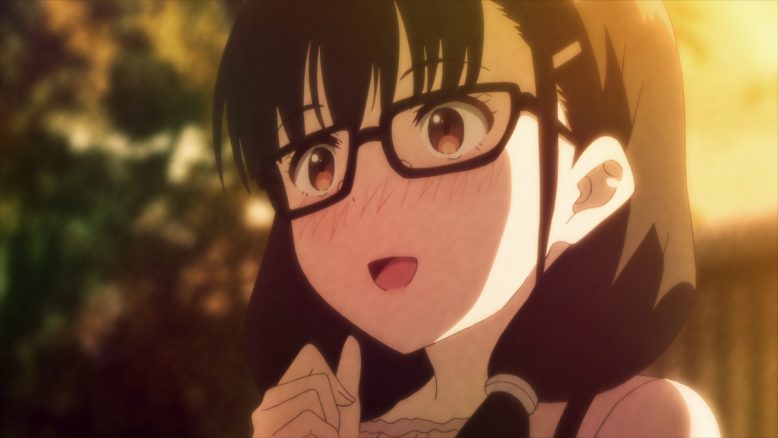 I think all this was worth it

Of course, the reality is that they can’t change the past. And it’s also fair to question whether things would have worked out well if Mizuto and Yume hadn’t dated. Isana took her rejection in an interesting way. I really question if Yume would have been able to process it the way she did. The idea of being able to be closer friends because the romance was cut off just doesn’t sound like a way Yume would have looked at it.

I honestly think that things would be far worse between Yume and Mizuto if they hadn’t gone out. It just feels likely that she’d pull back rather than stay close in that case. Yume is pretty critical of herself and I think she’d take that rejection pretty hard and struggle to remain around Mizuto. They would still end up in proximity due to their parents getting married, but they might be far more distant siblings. It doesn’t really matter how things would have been since that’s not how it went. But I do think even going out and breaking up allowed them to be far closer than they’d be otherwise. It is understandable though that Mizuto wishes he could have that positive friendship with Yume. 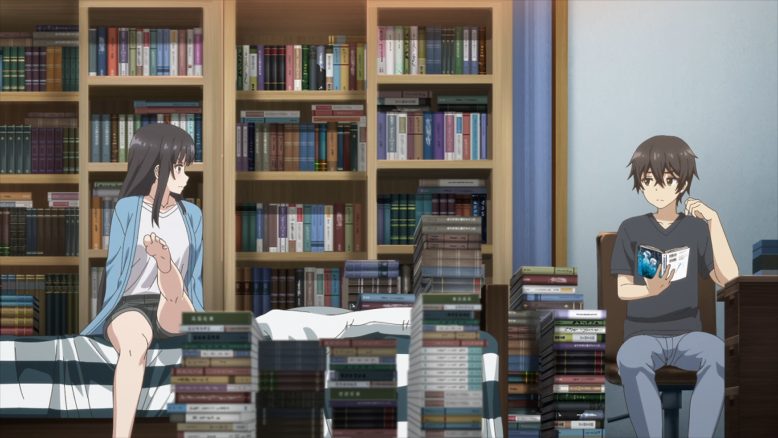 He really must wonder how it all came to this

The reality is that neither of them can actually handle that kind of normal friendship or sibling relationship. The tension is just on a different scale between them. When Mizuto puts on Isana’s socks (which wow she really gets him to do that) it’s not a big deal for him. Maybe it is more of something for her since she is in love with him, but he’s not shaken up by it. Both Mizuto and Yume were shaken up when he actually went ahead and put her socks on. As usual Yume set herself up for a tricky situation and had to deal with the romantic tension that exists between them as a result. Their relationship just isn’t the same as the one between Mizuto and Isana. That’s just unavoidable and clear as day. 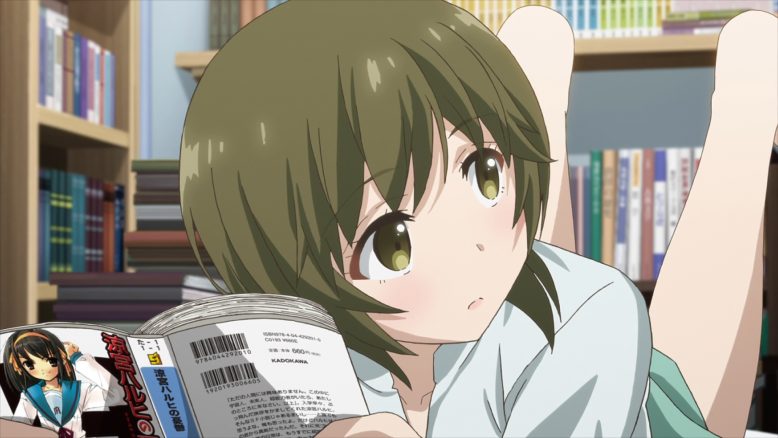 Nice to see you Haruhi

It does make me wonder how someone like Isana would react to finding out about the past between Yume and Mizuto. Heck, I have to wonder how she’ll eventually handle them getting back together since I still think that’s inevitable. It’s not likely to happen during the anime, but I think it’s just bound to happen. Of course, on a certain level it doesn’t change anything. The special brand of friendship they share isn’t changing whether Yume is just Mizuto’s sister (and ex) or his sister (and current girlfriend). It would matter and she herself acknowledged that him going out with someone would impact things. But it wouldn’t be as hard to take as him getting a friend that fills the same spot she has. 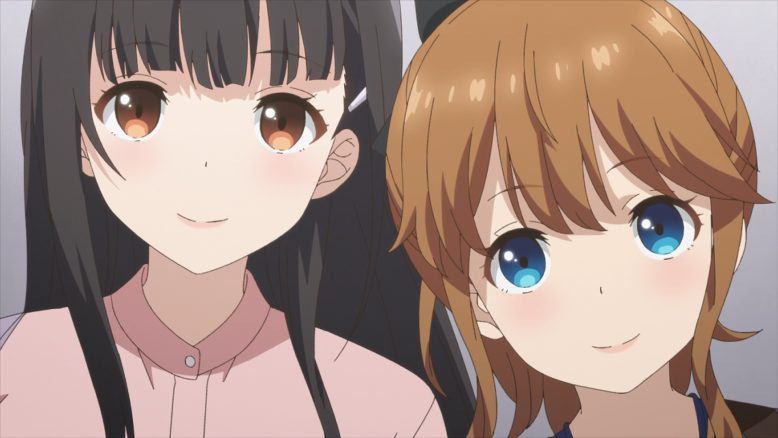 At least they had a good time

There’s not much to say about the dress-up portion. They wanted to highlight that Isana has an attractive body and they went for it as much as they could. They did also acknowledge the same being true for Yume. I’m sure her past self couldn’t imagine the person she is now. Now Yume hasn’t changed that much in terms of who she is at her core. But her fashion, friendships, and outward impression is completely different. It’s kind of funny how even her style now had been impacted by Mizuto’s impression of her. That she wanted to respect that sense of desire by not showing off to the degree she did in the past with the mini skirt. Be kind of interesting to see her further push out of her shell since she doesn’t have to be that restrictive. 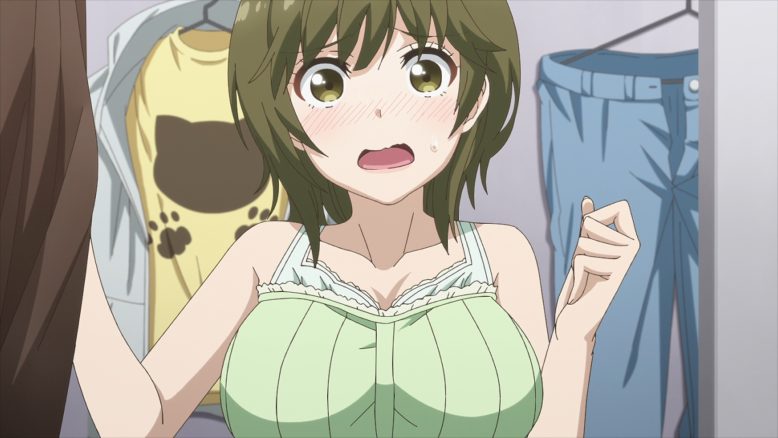 She was definitely an active part of this ep

This felt like a better overall episode. Isana is still walking that unusual line where she’s being more open with her interest in Mizuto even though she’s been pretty firmly shot down. But at the very least it is pushing things forward a bit. Minami…is kind of falling to the background for the time being. I’m presuming this is just a part of the story that wanted to focus entirely on introducing and developing Isana. Minami is at least lucky that her frustrating element of trying to take Yume for herself kept her relevant to this story. Kawanami was apparently not even worth being kept around for the past few episodes. Maybe he comes back in the next episode or two. Either way, I guess we’ll see what stirs things up next.