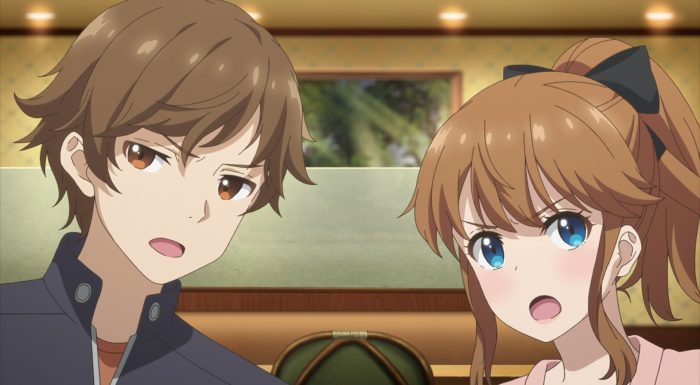 This episode was all about taking advantage of these two former couples for maximum comedic benefit. The funny thing is that the one pair doesn’t actually know that Mizuto and Yume used to date. They definitely have a feeling something is going on there. But as far as they know it really is just a couple of people brought together due to this marriage and showing some chemistry with each other. I wonder if they will actually find out before the show ends. I’m sure Minami and Kawanami will have some reactions when they get that reveal dropped on them! All the more so for Minami. She is playing at getting together with Mizuto as a way to stay good and close to Yume long term. But how will she take finding out that these two both have a history and lingering feelings? 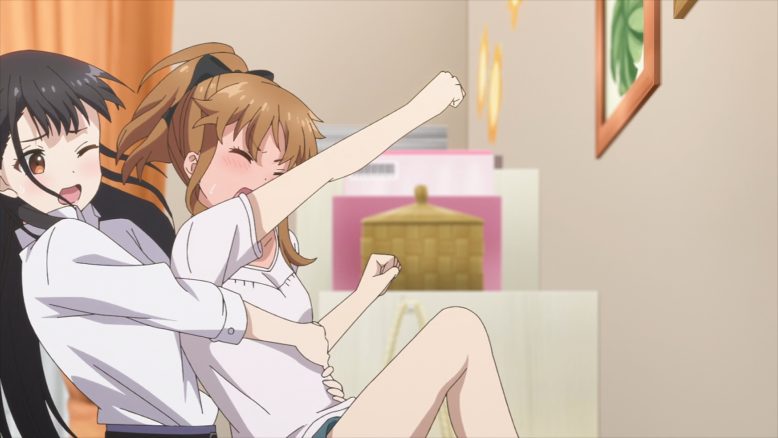 The best part was definitely having both guys messing with each other while knowing their exes are on the other side of a thin wall! Both Yume and Minami had top tier reactions. That scene alone should have cleared the two in on there being quite a bit going on between Mizuto and Yume. But it was still great seeing how they all took the situation. Yume was going to wreck her hands or that wall for sure. And the same went for Minami later on. Although I think she definitely was closer to destroying the wall than Yume who isn’t quite a physical powerhouse. I am impressed though that Yume was able to drag Minami away from the wall as well as she did. 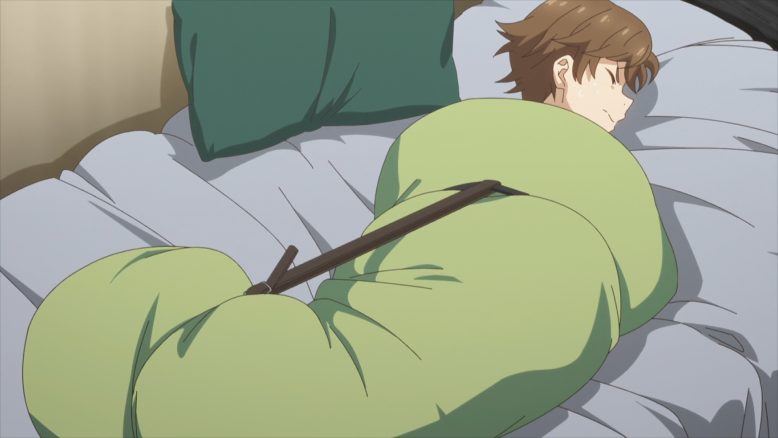 It really makes me think though. Kawanami and Minami really do have a lot lingering between them as well. Of course, with things ending so…dangerously between them I can understand both being ready to move on. Still, that whole “what I want to be when I grow up” bit was really telling. They really were close for a long time. Unlike the main pair, they just took what probably felt like a natural step from close friends to being a couple. Being that close probably makes the breakup even tougher on them though. Kawanami wanted to grow up to being someone that could protect Minami and Minami herself threw absolutely everything into dating Kawanami when the time came. It’s almost sad that things came apart so intensely.

There just doesn’t seem to be an end result that avoids both couples getting back together. It is a tough road for all parties. Kawanami and Minami are still really in sync with each other. Even if it is just on the level of arguing. They know what each like to eat, they have the same tastes in where to go for those meals, they live next door to each other, and they both like the Irido siblings. If they can find a way to not replicate what went so wrong then I think they’d really be happy together. 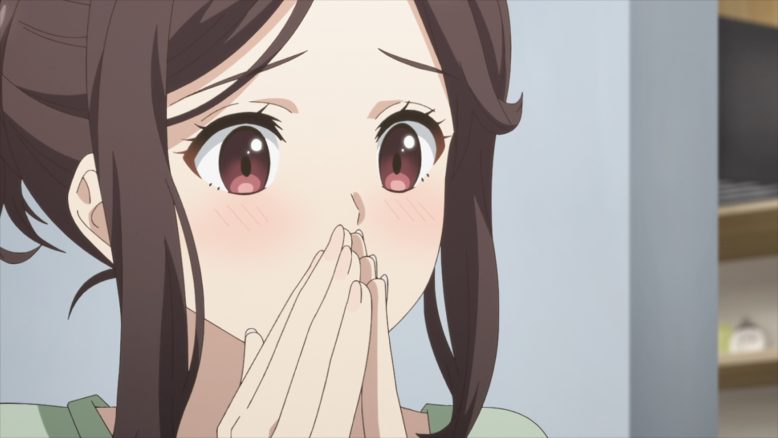 This was really nice

The Mother’s Day part was actually really nice. It was a good move for them to work together to make things go well for their (step)mother Yuni. Having her daughter and her new stepson being so sweet utterly made her day. And it also allowed for touching on a trickier subject. Mizuto’s actual mother is gone and celebrating Mother’s Day is an occasion to be reminded of what has been lost. And the fact that he doesn’t have any memories of her just adds to that. All he’s really got is what his father can tell him and the picture of his mother. I’m sure Yuni being a sweet stepmother is plenty nice, but it’s still tough. No complaints about them taking advantage of that to make for a sweet little scene between him and Yume too. Even if he can’t honestly appreciate her support, I’m sure it does mean something. 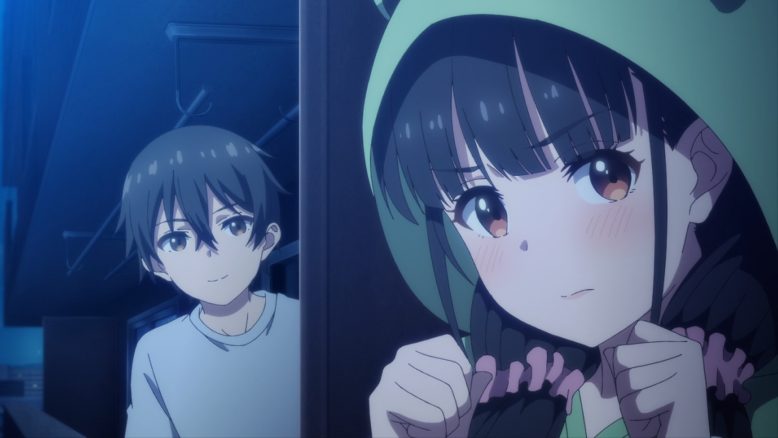 As always there are plenty of fun little moments between Mizuto and Yume. I liked her getting a win with dressing up and leaving him stunned. That only leading to them shopping together and impactful moments on the train too XD. But ending it with the whole talk while looking at the moon was good. Neither of them has forgotten the moments they shared together. That goes for the moment that lead to their romance starting in the first place. Even if he didn’t mean it like that, Yume took his words to heart and that sparked something in her. Without that moment she probably never asks him out at all.

And in the end, they have a connection that won’t be easily lost. While being stepsiblings is awkward in a lot of ways, it is almost a safety net. They have this excuse of being family to stay close to each other. It might make things awkward whenever they do want to go beyond that. But in this moment in time, it’s a huge relief for them. Kawanami and Minami have being neighbors and going to the same school to keep a connection despite breaking up. Yume and Mizuto were almost saved by their parents in this case. It gave them a reason to stay close and not drift apart. 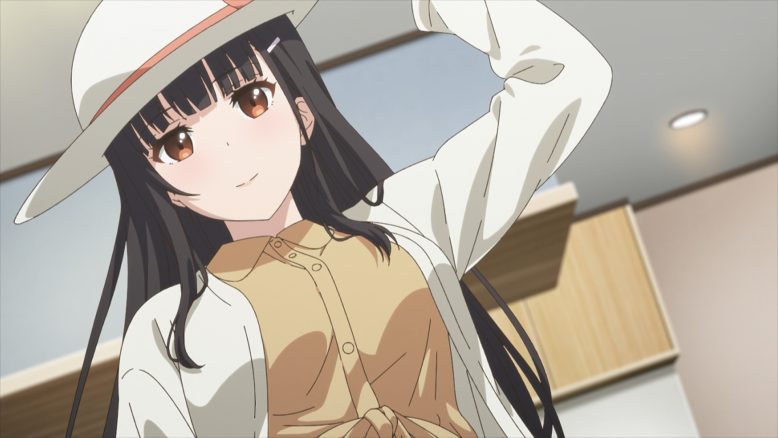 Yume is strong when she gets serious

As always, this show is really comfortable. The comedy is good even if I’m not falling out of my seat laughing. And the main cast is enjoyable to watch interact with each other. I don’t expect major resolution before this show is over since it is an adaptation. But it’ll be nice to see how far things get. I also expect the other girl from the OP to start making her presence felt since we’re about halfway through the show. It’s a good time to start adding in the final major players in the story and just let things build up.