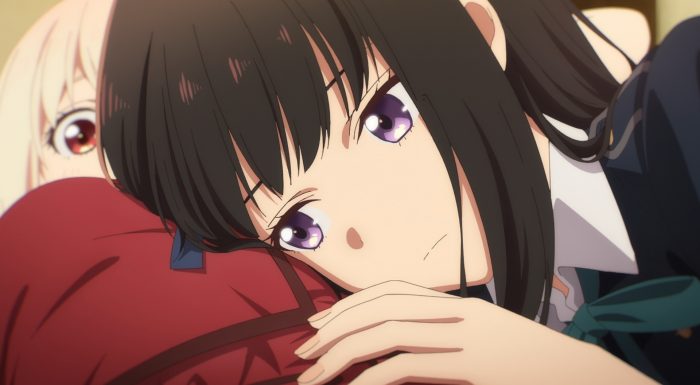 The flags are waving strong in episode 5! There are a lot of reasons to have doubts about Chisato making it to the end of this show. Potentially losing such a charismatic main character is not unheard-of and can be used to create memorable impact. I am absolutely hoping they are just trying to fake us out and Chisato will actually get through this entire story just fine and doing the things she loves. But at this stage I just have a lot of doubts about that. They have at least layered the concerns up enough that it could easily go down that road. 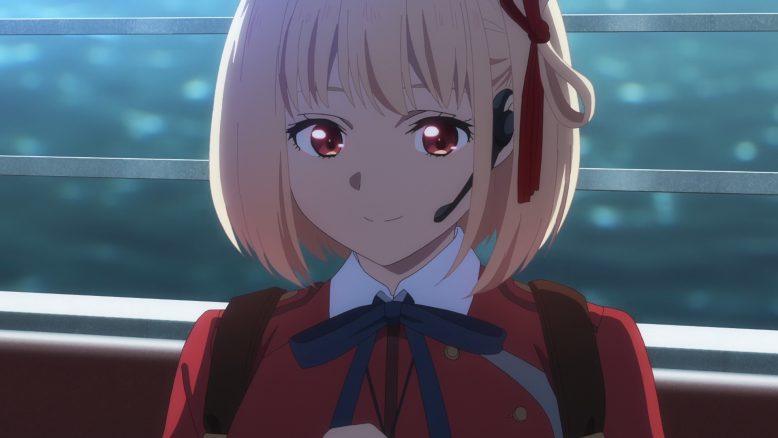 I hope she survives all this

Chisato having an artificial heart is one of the major points of concern A major point being that the organization that gave her that heart…seems to be trying to steer her into being a killer. An organization this shady just screams “we have a kill switch.” Now of course I can’t see Chisato going along with what they want even if they threaten to kill her in response. But that doesn’t keep her alive and still creates a major threat to her survival. If this organization saved her life to make her an assassin, then they could try to take her out if she constantly refuses to be that for them.

Another big factor about that heart though is the potential that she just doesn’t have much time left. Chisato has regularly talked about not wanting to take the time away from her enemies, being sure to enjoy herself, and there only so many times a person can eat in their lifetime, etc. It just feels as if she doesn’t expect herself to live a long life. Now it could be reading way too much into it and the story could also be trying to make us think that way. But it is hard to avoid thinking about it. If Chisato doesn’t see herself as having a long life then of course she’s going to have fun, not hold back on what she thinks, and not worry about calories in sweets! 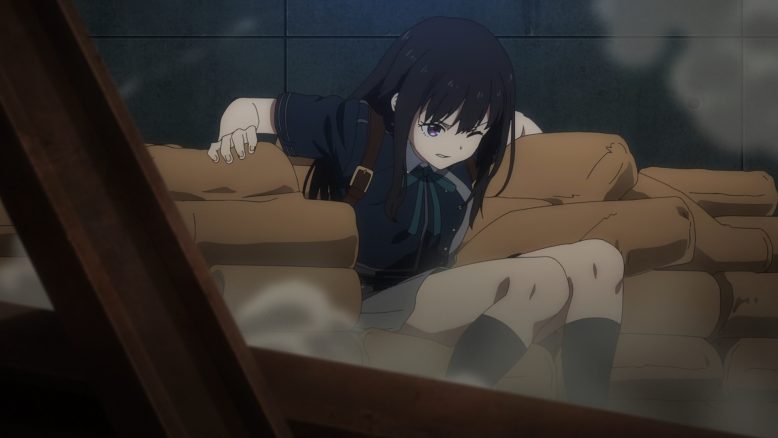 Is Takina going to be alright if left alone?

While it could be tragic for Chisato, I’m left feeling bad for Takina. Chisato has been a critical part of her character growth. All these events have helped Takina open up, enjoy herself, and start finding a place outside of the DA. The show could easily end with her definitely not going back to that organization and yet also losing Chisato. Now that doesn’t mean she’ll have no place. There are the people that visit that café, Mika, Mizuki, and Kurumi could all survive too. But that’d be tough for her to just carry on afterwards. Even if the story pushes her in the direction of living the way Chisato did and maybe picking up a new partner to support as well. It hasn’t happened and might not happen. But I feel a bit bad thinking on it. 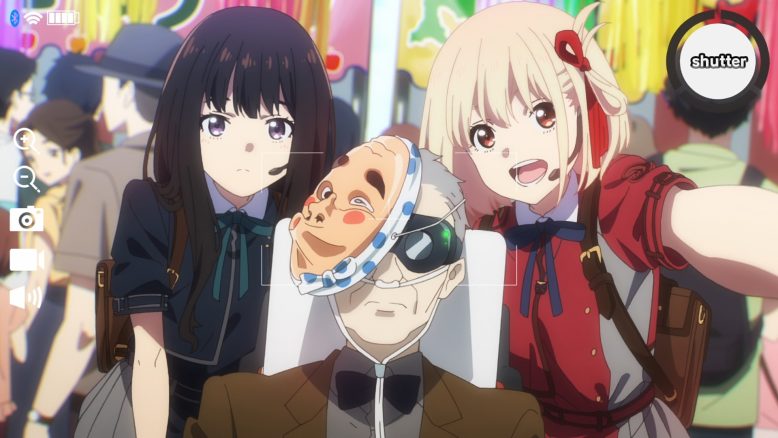 A cute moment…until we know the truth

What a messed-up situation though. That poor old man was kidnapped and basically used as a toy to try and make Chisato kill. That Shinji guy is a real piece of work. I don’t care if he’s doing it so his organization won’t try to terminate Chisato or if he honestly thinks it is the best thing for her to end up that way. That’s clearly not what Chisato wants to be and not what she learned from their previous encounter. But he is absolutely determined to make her kill and is already doing extreme things for that purpose.

I really wonder what happened in the past between them. It seems likely that Chisato got her artificial heart at that time due to what happened at that tower. Something she did there convinced him she was worth taking extreme measures to save. And that encounter changed things for the both of them to some degree. But they both clearly took different messages and lessons from it. It’s going to be tough on Chisato when realizing what this guy is doing and why. I wonder if the story he told Chisato about his family was true. Maybe he does really want to make her a killer that can kill the person responsible? 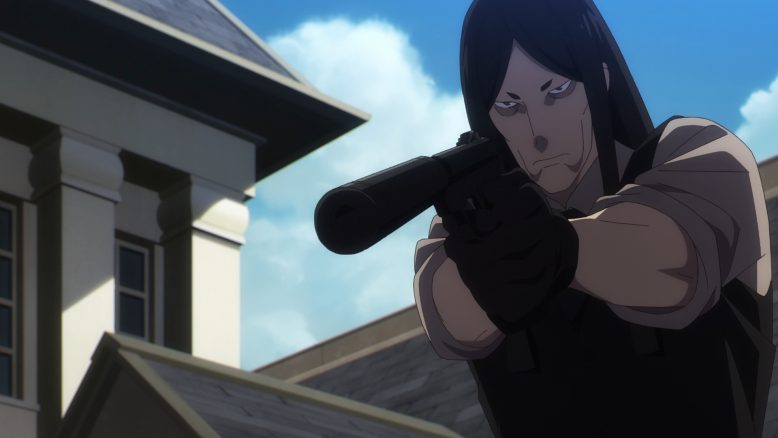 He’s pretty good at what he does

Silent was one capable assassin. It was good having an opponent that could push the Lycoris around a bit. Takina had a tough time against him, although she did some good work as well. Chisato when going into aggressive mode did handle things, but she also had the drop on him. If nothing else it made things pretty tense since he did handle a lot of their tricks and had Takina pinned down and injured. It is funny that the guy gets to walk away clean, but I guess that’s how it goes since Mika is friends with him. Plus, in the end they were all being played. Having him alive and mobile could make him a useful ally later on. 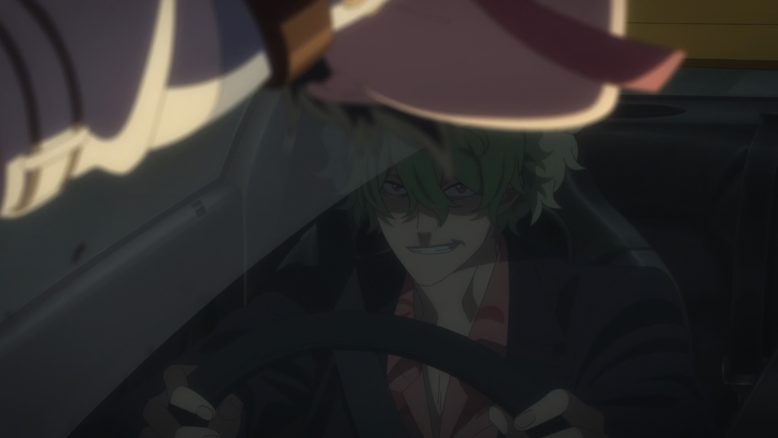 I wonder when they’ll take this guy on?

Mashima’s also continuing his creepy activities. There is an angle that those trying to kill others not being able to complain about it being turned on them. But it was a pretty sad result for that one girl. This guy really does make me think of the Joker in some ways. Mashima just has a flair for the dramatic. He used one of his own thugs as a lure for a Lycoris. There were other options to take her down, but he personally chose to run her down with a car! And then he had his men unleash entire clips of ammo into her. It really shows how fragile the current situation is and how the Lycoris’ intel is not great. That girl didn’t seem to have any backup and was utterly led into a trap.

This guy hasn’t crossed paths with Chisato and Takina yet. But it really is only a matter of time. Heck it is only a matter of time before they have the DA calling them for help. They are literally bleeding members right now. Heck of a time for them to kick someone like Takina out. I wonder who they are going to kick out to cover up their Lycoris being hunted down by this guy? In the end though, someone has to stop him and I can’t see anyone besides the main cast being capable of it. 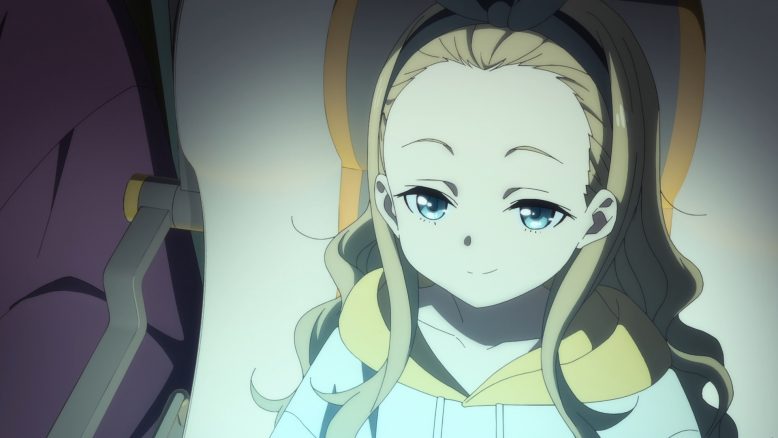 Kurumi is a nice supporting character

This was another really solid episode. I love the growing bond between Takina and Chisato. Things ending on that sweet and slightly sad moment of Takina checking and confirming Chisato’s lack of a heartbeat. The skinship remains strong between these two! It makes me wish for things to work out as well as possible. These two seem set for a happy partnership if not more than that. And the only question is whether Chisato will be there to see it. But if nothing else it is clear how much closer they are getting. And it also confirms Takina’s lack of hesitation. She will totally feel up Chisato in public to confirm the whole artificial heart thing! And for Chisato that brutal take-down of Jin was almost certainly fueled by anger at him clipping Takina with a shot. They make for a good pair and I look forward to seeing more.