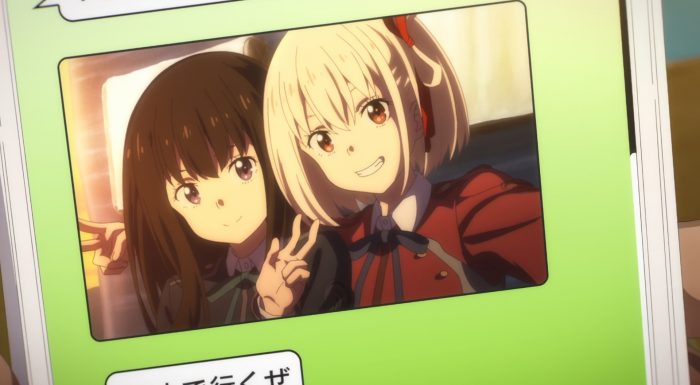 It was nice to just use this episode to focus pretty heavily on Chisato and Takina themselves. In a sense the episode was just Chisato completing testing and Takina’s failed efforts to get back into DA. But there was a lot going on within those events. It was especially valuable for bringing Chisato and Takina much closer together. These two are obviously going to clash at times in the future. Their approaches and strategies are different. But they do have the potential to make for a great duo. And this episode showed what the foundation for that can be built on. Takina still feels a bit lost, but by the end of this episode she was looking a lot better. At the very least she can face the future a bit better and know she has someone there that cares enough to support her. 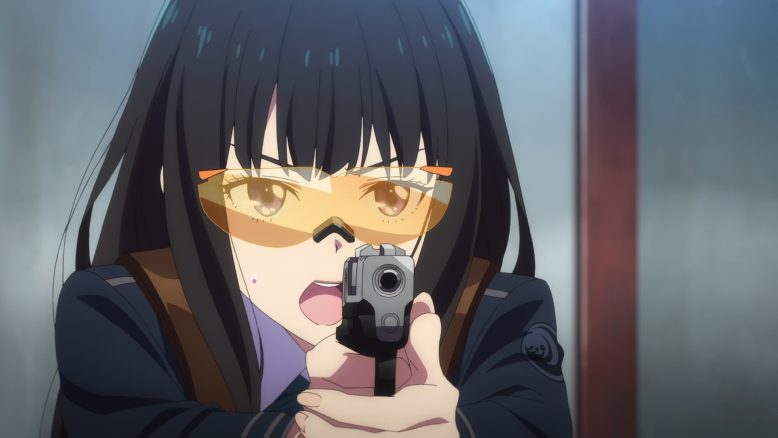 Takina got some payback!

Chisato was legitimately there for Takina throughout a lot of this episode. She didn’t hold back on at least trying to get Takina back into DA. While she likes the girl and wants her to be around, she was supportive of what Takina wanted for herself. It just didn’t work. While I get why Takina was being made to take the blame for things…I’m still surprised at how short-sighted it was. Takina has skills and a lot of potential. Losing her just to cover up for their mistake in the timing of the deal and the hacking seems like a bad move long term. They are losing a valuable asset that actually wants to be there! Maybe the logic is that they can do whatever they want to her and she’ll still come crawling back to them later…but I’m not sure that will work out.

It was incredibly satisfying to see Takina get her revenge punch! She could have easily taken a shot while everyone was focused (understandably) on Chisato. But she still ran in there and got her payback. There were enough obvious signs that she hadn’t moved on from that punch she took. And finally, she got a chance to repay it while also scoring the win. She didn’t hesitate to take her shot…at Chisato XD. I do love the idea that she’s really getting frustrated at Chisato’s bullet dodging skills. Sure she “believed” that Chisato would dodge, but I have to think she wanted to be wrong and hit both her and Fuki. Get the total win just for herself there XD. 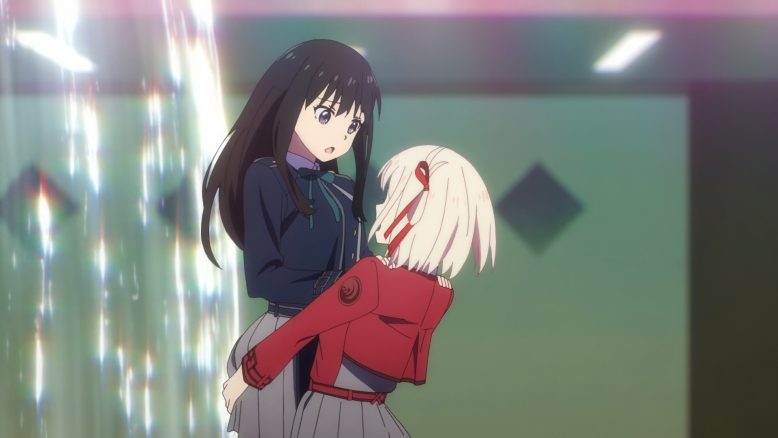 These two are a treat

I’m fully going to admit that I’m enjoying the Chisato and Takina ship. They aren’t exactly holding back much on that front which makes it all the easier to have fun with. Chisato was pretty straight forward about being happy in meeting Takina. And she really tried to express that with words, with hugs, and even with a little bit of carrying her around! And she is opening a path for Takina. There’s no way that Chisato doesn’t want Takina to choose to stay with her and the café. But at the same time, she’s giving the encouragement that Takina will eventually have her chance. There’s no way she won’t ever get invited back to DA. All she can do is keep moving forward and then choose what she wants when the opportunity comes. I like these two and hope things work out. 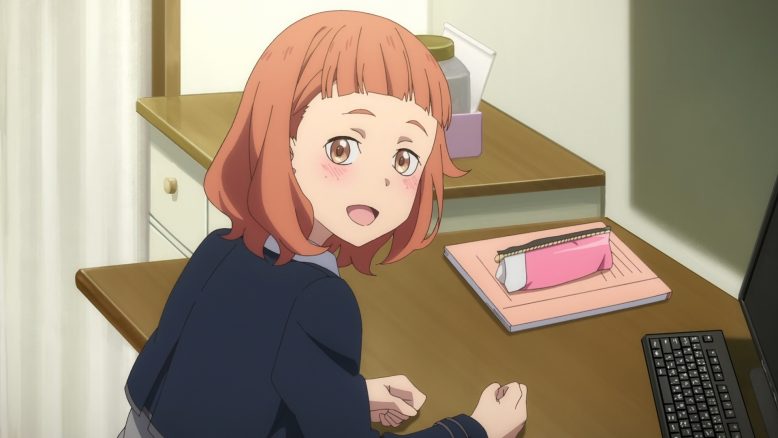 I look forward to her talking with Takina later

Erika is an interesting girl. I kind of thought that she would get her chance to talk with Takina since she obviously really wanted to. But I can appreciate that they are saving that for later. The girl obviously has mixed feelings. She knows that following orders matters and that what Takina did was against the rules. But at the same time, she was the person saved by Takina’s actions. And she also is carrying the weight that if she hadn’t gotten caught then Takina wouldn’t have had to make that call at all. There’s a lot of mixed-up feelings that she is working through. And yet the last scene with her really told the story. She was upset that her hopes of Takina being allowed to come back were dashed. And the moment she was told Takina was right there…her face lit up with joy. 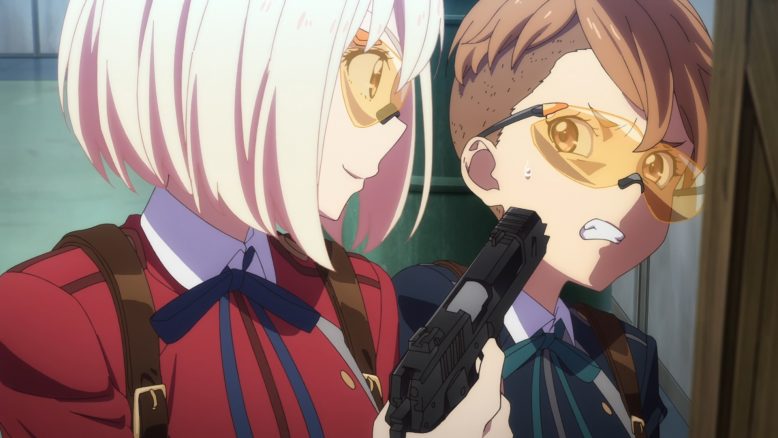 Mess with her girl…and you pay for it

The mock battle was a lot of fun. I could share Chisato’s enjoyment in crushing the brat that was picking a fight with Takina. That girl could talk a good game, but that just lined her up for deserved punishment. And some of the advice was on point. Chisato keeps her gun close to herself as much as possible. That lets her shoot someone much closer to herself and gives less room to take the gun away from her. But really even if she did a better job Chisato was plenty motivated to remind her who she was messing with. There’s no question that Chisato is a monster and that one shouldn’t rock the cage without thinking.

Fuki knew what she was getting into, but still got handled pretty effectively. She knew that Chisato was dragging things out for Takina’s sake and yet couldn’t pin her down. Even if she knows the gap between them, that doesn’t mean that Fuki has accepted it. And no surprise that she couldn’t handle Takina suddenly entering the fight. I’m curious how Takina would match up against Fuki in a solo fight. I’d probably expect Fuki to win though. Even if Takina has crazy good shooting accuracy, experience remains a pretty big factor. But I wouldn’t be shocked to see Takina rise up to surpass just about every other Lycoris…besides Chisato XD. 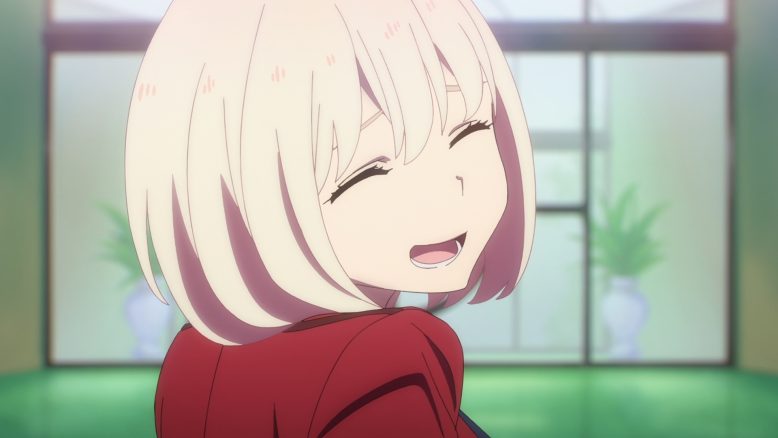 I had a lot of fun with this episode. The silly stuff with the games in the early part was fun. Same with Kurumi utterly blowing DA away when it came to analyzing that picture. But the best stuff really was centered on our main duo. These girls are great and I’m having a lot of fun watching them. This is just one of those shows that works well for me and is easy to keep up with. I’d be surprised to not keep going with it for the rest of the season.