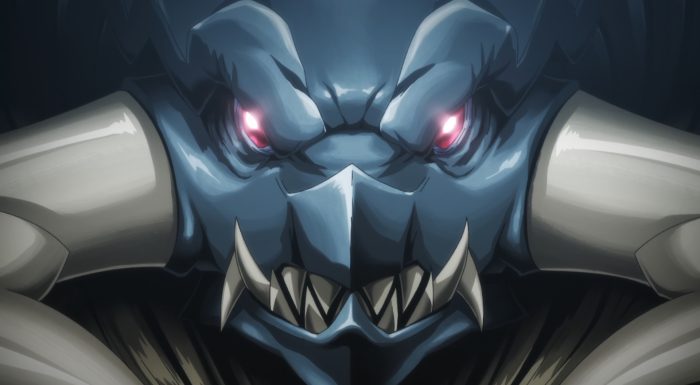 Even though this episode had a total victory for the main characters the tone wasn’t exactly a cheerful one. I feel like Haku is going to continue having a hard time for just winning the battles that he needs to win. I get why people are a bit uneasy about some of the choices being made. Setting your enemies on fire and creating total chaos is a bit of an extreme move. At the same time though…this is war. They really don’t have the luxury of playing fair or being kind right now. If they lose, then they are going to get killed. Of course, not everything is cool when it comes to victory since that could lead to truly horrible atrocities. But I don’t think taking out the enemy force attacking is a big deal. No innocents at risk, doesn’t hunt down the soldiers fleeing, I’m good with this. 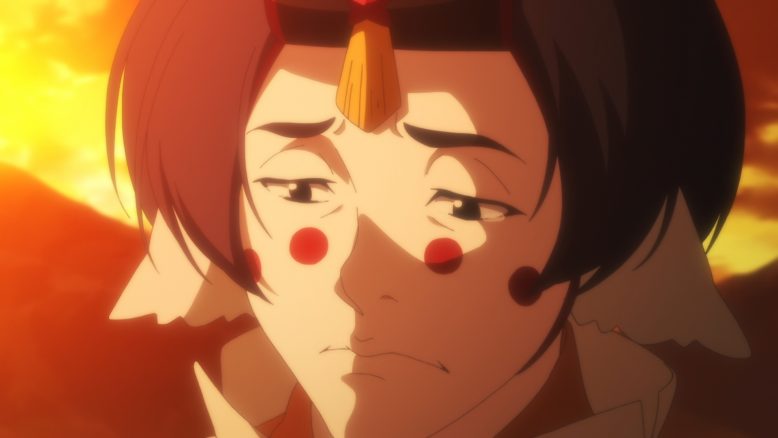 Sorry, but Haku was right here

I get why Maro was upset by all this. He just saw a lot of soldiers he went there with getting killed. I’m sure he wanted to keep as many alive as he could. At the same time though…I think he’s being a bit naïve. This is war after all. What did he think “Oshtor” was doing out there and what did he want him to do? Did he want him to take it easy and invite the invading force out for some drinks? He doesn’t have a full grasp on things so that’s fair. But the Princess is being hunted down, Oshtor’s force isn’t very large, and they don’t have a lot of options. This was a tactic that was a necessary evil considering the dangers involved and what was at stake. I’m fine if he doesn’t want to join up right now. He needs some time.

At the same time, he probably should consider what he’s going to do going forward. Where is he really going to go? Yamato isn’t going to stop their attacks. Is he going to help them hunt down the real Princess? I’m sure getting hit by Haku’s “death” was tough to take as well. But the last thing I think he should be doing is complaining that Oshtor is focusing on winning the war. The actual dead are dead. The only thing that can be done right now is to go and win this war and put an end to the killing. Then the dead can be fully grieved over. 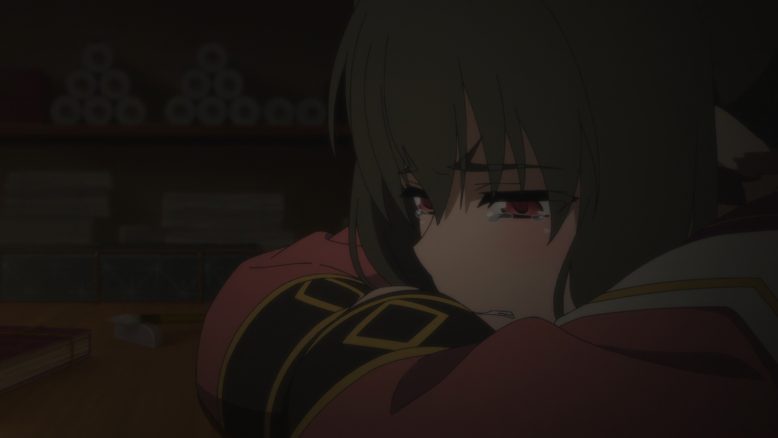 No comfort for this poor girl

No shock that Nekone is having a tough time. The poor girl’s brother died and she can’t openly react to that. The best she could do would be to grieve for Haku, but that’s a lot of acting to demand of her. The best she can do is just stay focused on the conflict when out in the open. It’d probably be good for her and Haku if they could share their grief and lean on each other a bit more in private. But it’s understandable that she wanted to be left alone. It’s probably tough to share her grief with the person that is having to play the role of her brother. I can’t imagine how hard it will be when the truth does come out. Because some will obviously cheer Haku being alive…but it comes with the reveal that her brother is dead. 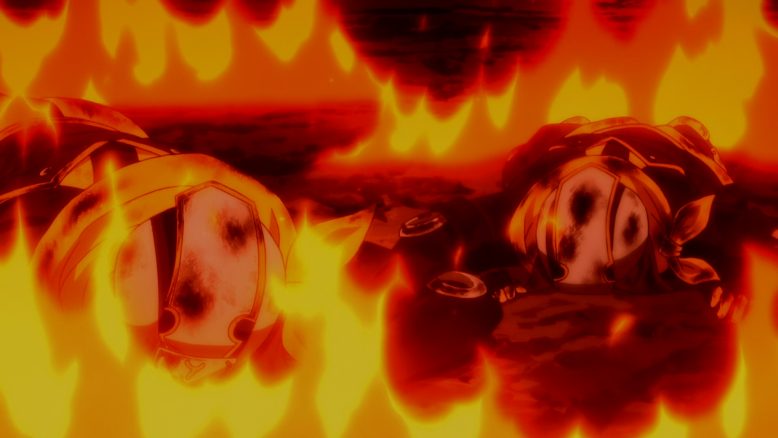 Well…that’s one way to go.

I fully respect Haku’s tactics here. Even with the surprise monster attack, things worked out fine. It is hilarious though that this thing was supposed to face off against a transformed Oshtor. It was a good move to lure in the enemy forces and hit them hard. Even blocking the area behind the gate with boulders was brilliant. Getting through that wouldn’t be easy at all. And not possible while the enemy force is raining arrows onto them. And the oil and fire move was a good one. It was a powerful move for both decimating the enemy force and breaking their spirits. How do you keep on the attack when you are either on fire or watching your allies burn around you? It is even more difficult thanks to Haku’s forces having quality of fighters on their side. Haku got the job done and shouldn’t feel bad about that. 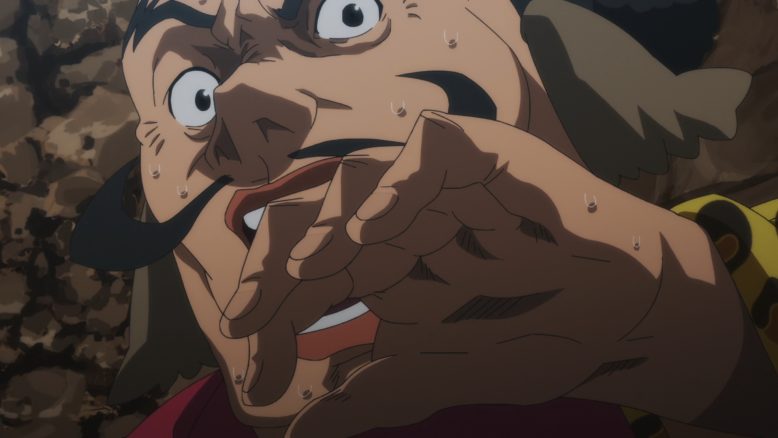 Not sure why he thought this would end well.

The scary thing is that we’re only just getting started. Yamato didn’t even really attack them. Dekopompo was just an idiot and attacked without thinking about what he was doing. That he fell for their taunts was a given. The guy isn’t bright. But his tactics were sloppy, and he didn’t realize how the battle would unfold. When things started to go badly the worst thing he could have done was run off by himself. It’s a given that a good general is going to try and crush the head of an invading force so they can’t just gather more troops. Of course, Dekopompo has no charisma so getting his allies to calm down would have been difficult. But if he could have calmed them down enough then they could have retreated as a large unit. It would still be risky, but less so than what he did. 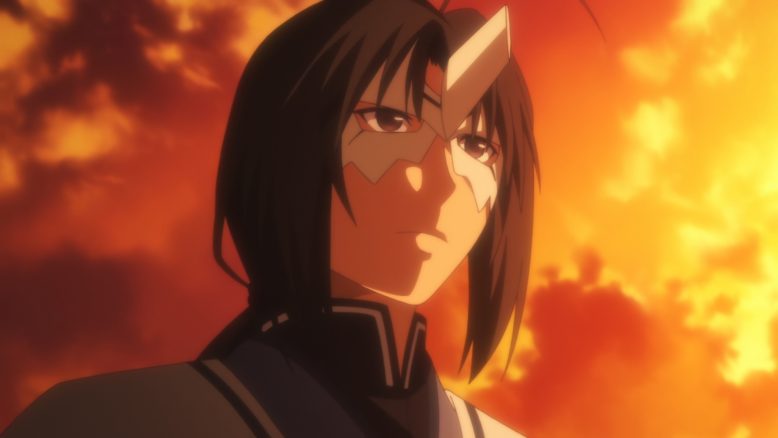 It’s a long road ahead

I’m really getting into this so far. This franchise is pretty good at managing the balance between drama, war, and nation building. At least the original series was pretty good at that. So far, the war stuff has been good, and you know drama is coming. I’m not sure how long Haku is going to pretend to be Oshtor. But it might be until Kuon shows up and he has even more reasons to tell the truth. Hopefully he can continue finding comfort in his allies and build a good connection with them. This war is going to be tough and if he loses their support then he’s not going to have much hope at keeping anyone safe. And I’m curious to see Anju’s role in all this. Right now, she’s just not in a good state, but I can’t imagine it will stay that way forever.