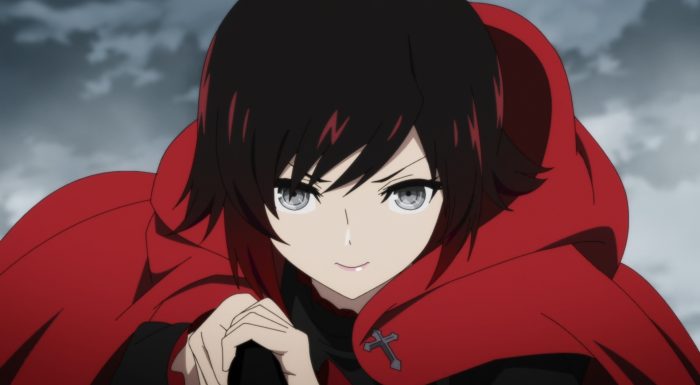 I found jumping into the first three episodes of this show an interesting experience. Talk about a good way to try out the three-episode rule! That allowed me to just jump into this franchise and start to get a feel for the main characters. RWBY is a franchise that I’d certainly heard of before this show came out. For whatever reason I just never got around to actually watching anything from it XD. It did leave me hearing a bit about the various characters, but little beyond that. So, this was a chance to go into the franchise fresh and I was happy to take advantage of that. And I’ll say it was a pretty good series of episodes to start things out. A little over an hour spent getting a feel for these characters, their abilities, and the world they are living in. Still plenty to learn though. 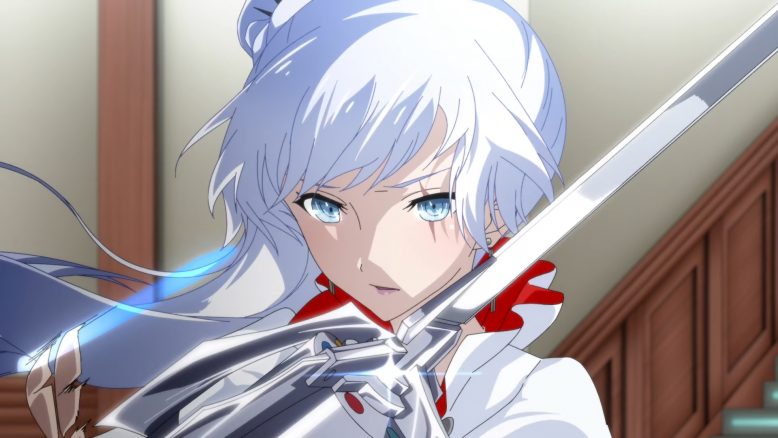 For some reason she did grab my attention

It likely isn’t a surprise to anyone that the character that drew my attention the most in the opening episodes was Weiss. That just feels on brand for me at this point. But I think that’s also fair for how much focus she really did get in the early going. It feels like she has the most layers initially and there’s a more obvious character arc to play out for her than some of the others. There’s the obvious discrimination against the Faunus people. Having a character face their discrimination and grow is a solid character direction. The nice thing is that this isn’t a random element. Extremists from Blake’s former White Fang organization have caused a lot of harm. I’m guessing the personal hit she’s taken is more than just having to attend funerals for innocent victims. But we’ll have to see there.

But her character isn’t just the rich girl that thinks she’s better than she is. Just look at the ‘test’ she had to take before her family would even let her apply to go to that school. She had to fight an absolute monster that was definitely intended to be more than she could handle to make her quit. I’m fine with her fighting back against the idea that she’s had everything handed to her. No question she’s had access to great resources, but she didn’t have much support from her father. I’m getting the feeling the situation with her mother is more serious than only having a drinking problem. I can just get behind someone who had to struggle just to get started and is struggling in her own way even after getting this far. 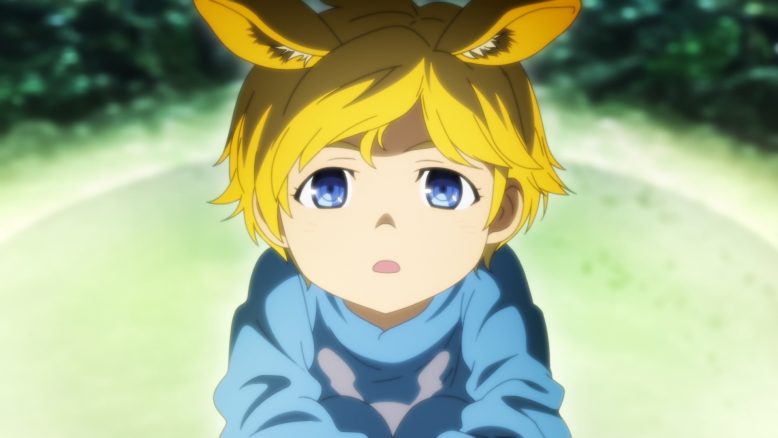 Thank you to the tutorial guy

The big thing as well is how everything is set up for a big effort to rescue Weiss. Jaune being trapped in his own mind by that Grimm beast was basically a tutorial run. It showed the easy mode of what this kind of thing can be and sets up Weiss who is likely to be a much tougher person to save. The layers for that kind of rescue honestly has me kind of excited. And they set that up nicely with various bits of dialogue during the other mission. Weiss has way greater aura than Jaune at this point so that thing will really get to grow before detection. So, it will just be a tougher threat in general to face. But there’s also the issue of trust. Weiss has said good things to Ruby and Blake, but how much does she really trust anyone?

If Weiss doesn’t open up then there’s no guarantee her full team can even go into her mind to save her. She’s clashed with Yang who called her out as faking being a teammate. She probably hasn’t dropped her Faunus bias that fast. And she’s banged heads with Ruby often. I do think she will accept Ruby, but it might only be her. She wasn’t lying about the bunk bed thing. And even when Ruby wanted to prove that she was capable during the first test, Weiss admitted to already knowing that. She may be stubborn in a lot of ways, but I do think she appreciates Ruby at her core. This is a great chance to just make the most of the chance to help this girl out and help her grow. 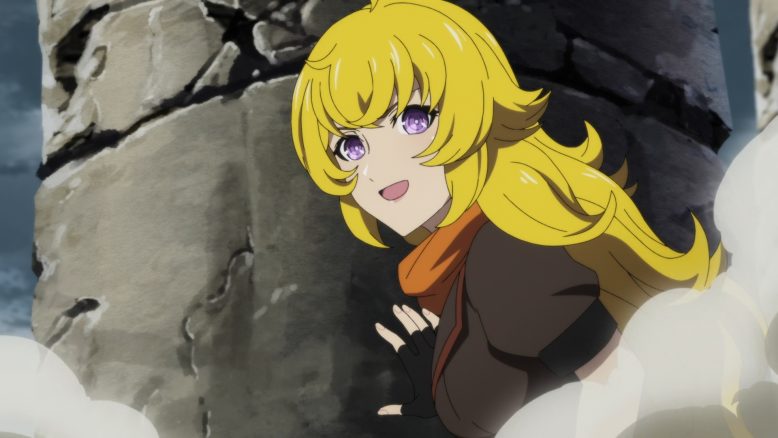 Despite me being way focused on her character, this isn’t just the Weiss show. I do like the cast overall so far. Although I feel like some characters have gotten more spotlight than others. I’m not sure if I have a good grasp on Yang yet or if there is anything to grab onto. Different last name than her sister is a bit odd. But she’s a pretty capable and headstrong person. Someone that Ruby obviously looks up to a great deal and for good reason. There just isn’t that much for me to get into yet with her, but I’m sure that’ll change as the show goes on.

Blake has good potential. She can create nice drama being the one non-human on the team. Plus, she was part of a terrorist organization. Although I guess she’d argue it wasn’t that in the past and she left once they started down the wrong path. But clearly, she hasn’t been out that long so they were definitely doing awful things even while she was still there. She just didn’t likely take part in many of them and eventually hit her limit. So that side of her past will be interesting. Blake just has nice potential to help push that issue forward and eventually clash with her own people. White Fang isn’t going to get less extreme over time. So eventually she’ll have to clash with them. Still supporting the many good Faunus who just want peaceful relations while also facing off with those Faunus who have chosen violence. 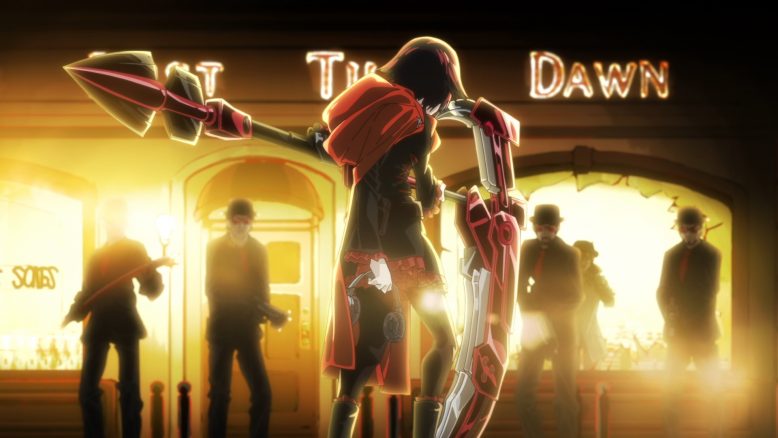 Cute and has a cool weapon

Ruby is fun and cute. She’s definitely having to struggle a bit with handling the responsibility of being a leader and how fast everything is moving. One moment she was just happy for her sister and hoping that someday she could follow her path. Then she’s fighting criminals, getting skipped a couple years into that school, and now she’s the leader of a team with some pretty strong personalities. She is earnest and wants to support everyone. But some personalities are harder to handle. I think she’ll be good friends with Weiss, but that it’ll take work. Honestly it is also cool seeing more scythe wielders in anime. It’s not an unseen weapon in anime (as a fan of Symphogear I can attest to that). But it’s a cool type of weapon that often falls behind other types. It will be fun to continue seeing Ruby fight Grimm with it. 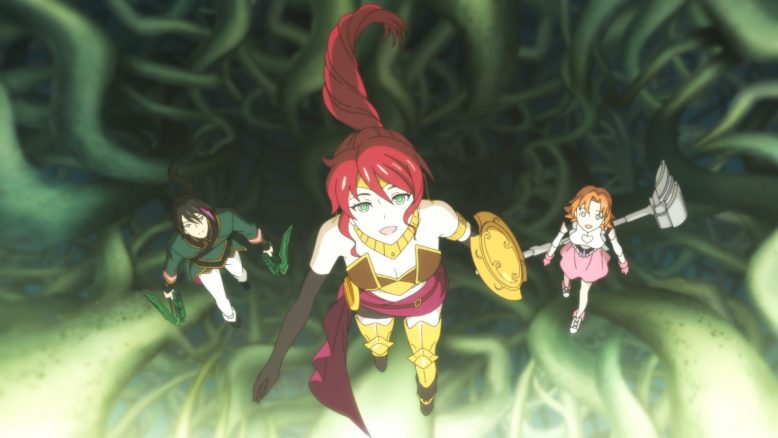 I like that we have a couple teams right now to focus on. The B team is perfectly fine. You have a couple nice pairs within that team that just ship themselves. They aren’t insanely powerful, but you can see the potential. Jaune like Ruby did show nice leadership when cornered during that orientation. I can see that guy turning into a capable guy that maybe isn’t the most powerful, but he can direct his team really well from the front lines. It doesn’t feel like you get this kind mix all the time. You of course have the great main team of female characters and they’ll all be great. But both guys and girls are thriving in that setting. There’s just a nice sense of balance and contrast in having these two teams interacting as often as they do. 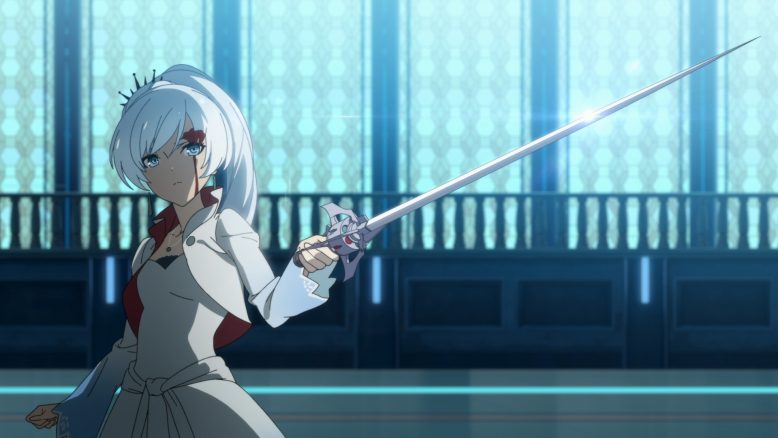 The next challenge will be a tough one

This was a really solid start. The visuals worked just fine by me. The action has really nice potential with the various weapons and powers at play here. And it is just getting started. We’ve barely been introduced to these characters. It has already been three episodes I suppose, but that just shows how much there is to explore here. There is still a lot I need to get my head around in terms of the setting, powers, etc. But this was a good way to start things off. Three episodes was enough to at least get me interested in seeing how this story plays out. Will see if I pick it up this season. But this was a good look at what is coming.