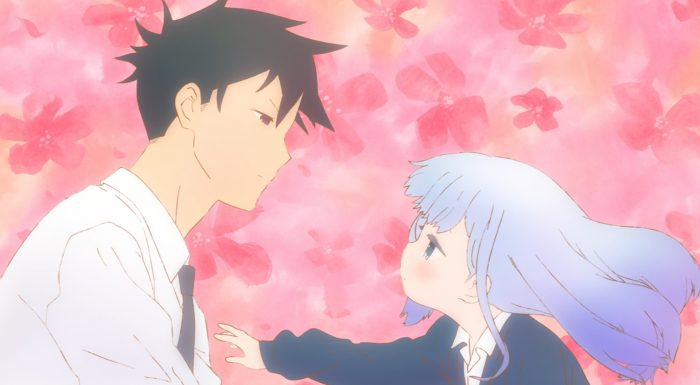 It is always fun seeing series catch me by surprise. That is definitely the case with Aharen-san wa Hakarenai. This show had a slow first episode to introduce things from the perspective of the male main character and only once we started to understand Aharen a bit better did things really take off. But the result was one of the more satisfying romantic comedies of the season. The amount of progress and the way the show finished up left me feeling really fulfilled. There is still room for this series to get another season if needed. But it could truly be done with this one season and I think people could be happy with that. There are definitely shows (even from Spring 2022) that it could be compared to. But I think the overall package makes Aharen-san a show worth checking out. 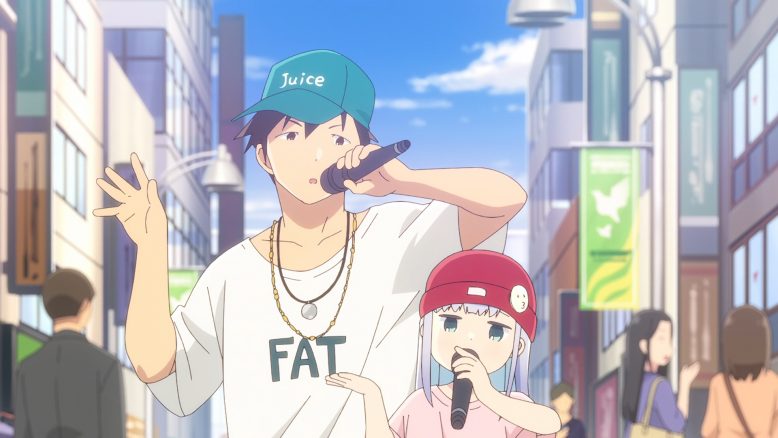 The story is a pretty straightforward one. Two very quirky main characters end up growing closer with a great deal of comedy resulting from that. I’ll delve more into their actual quirks for the character portion. But the main focus of the show is just seeing what silliness results from these two-spending time together. Whether they are trying to overcome one of their problems or simply living through relatively normal school activities, there is plenty of comedy born from their interactions. This is one series where the appeal isn’t from a complicated setting. Just a bit of unusual circumstances for the titled character. Very much slice of life mixed in with a romantic comedy.

The one interesting thing for me is how that romance is handled. A lot of the show just has these characters naturally spending time together. There isn’t much focus early on regarding characters getting embarrassed or anything else. They just spend a lot of time together and naturally grow attached to each other. So, when the story does take a turn towards building up the romance, it feels natural and justified. Things just steadily build up to a nice point and makes their relationship such a great highlight for the series. There isn’t much dragging it out once the characters start to understand their feelings or a lot of drama getting in their way. It’s not without a bit of drama, but it’s almost all natural for the personalities of the main duo. 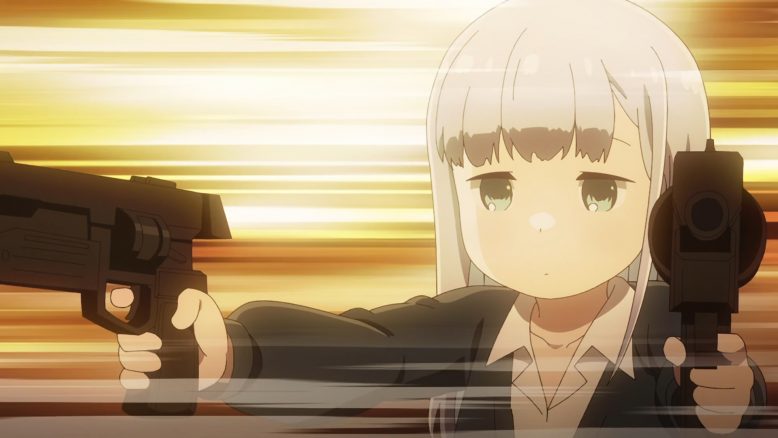 The show really is all about the main characters here. Aharen Reina is the star in a lot of ways. She starts off as just a character that struggles with distance. It’s over the top and comical, but it still has impact on her. She is someone that initially doesn’t want to interact very much with Raidou because of her inability to maintain a natural distance. A bit of a push and she can get far closer than most people would be comfortable with. It’s nice to see all the efforts she and Raidou go through in order to build a steady relationship between them. Not even on the romantic sense. They just naturally work hard to get closer and figure out ways they can get along better.

Reina is a fun character because she does have a lot of pretty fun talents. She isn’t super human and does hilariously fail in various ways. And when she does get emotionally invested it is cute seeing her really struggle with that. She naturally gets too close to people without realizing it. But once she realizes something that powerful for herself it makes things a bit more interesting for her. If nothing else Reina is a blast when getting to show off her gaming talents. While she may not get as much attention as other female characters due to not being much of a source of fanservice, Reina is one of the best girls of Spring 2022. 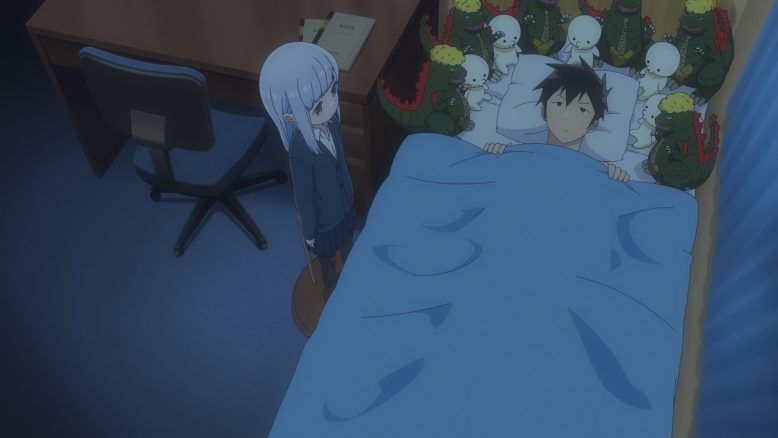 This man’s life is stranger than you’d think

Raidou Matsuboshi is the other star of the show and there’s no surprise there. The best thing when it comes to Raidou is that he isn’t simply ‘the normal guy.’ It would be so easy with this kind of show to have Reina being the strange one and Raidou the boring normal guy. Raidou instead is a really odd guy himself. His imagination is so incredible that he should write novels. If he could keep his thoughts from going too far then he would be able to write up some great stuff. Sometimes his thoughts actually are correct, but most of the time he’s just coming up with weird scenarios.

He probably considers himself a pretty calm and normal guy. But how he interprets the things Reina does just makes him a lot of fun. And wow he gets sick in the most entertaining way I’ve seen in anime in a while. It’s worth watching just to see him catch a cold. Raidou is a good guy though that works really hard to bridge the gap with Reina. She has difficulties due to her height, difficulty judging distances, and just various elements related to that. But he works as hard as anyone to make it easier for her and to make it work. And initially it is just because they are neighbors in class. By the end things change, but I appreciate how good a guy he is. 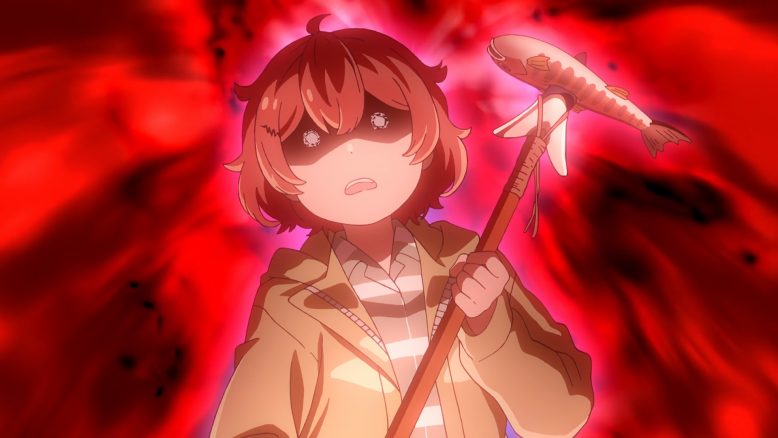 A major appeal for me when it comes to this show is the supporting cast. There is a good mix of individuals from the siblings of the main characters, teachers, and classmates. But two of them stand out the most for me. Ooshiro Mitsuki is one of them. She actually works well in a tricky spot of being the yuri stalker of the cast. That’s a position that can easily create a very unlikable character. Ooshiro avoids that though thanks to being really sweet around Reina. She is honest about being so frustrated about Raidou’s closeness to Reina that she’d want to do something, but she openly resists that. I never really worry about her going too far. She is as nice a stalker as you can get and most of it comes from just being too shy to be openly around Reina all the time. 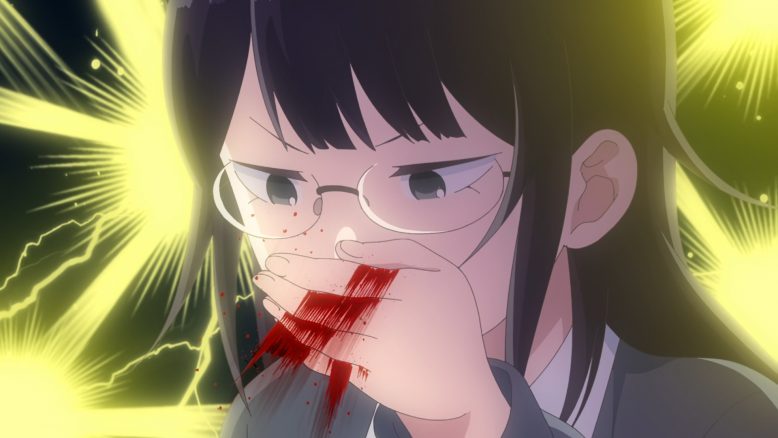 Not sure she has long to live

The other major supporting character for me is one of their teachers. Toubaru is just a truly hilarious person. She isn’t always around the main cast. But her life is often in jeopardy any time she is around. The absolute cuteness of the ‘esteem’ between Aharen and Raidou often causes massive nosebleeds and actual collapse. Her health is in jeopardy just when she simulates interactions between Reina and Raidou in her mind. There may be a day her friend finds her needing a trip to the hospital! They manage to make her nearly dying over the esteem of her students really fun and cute. 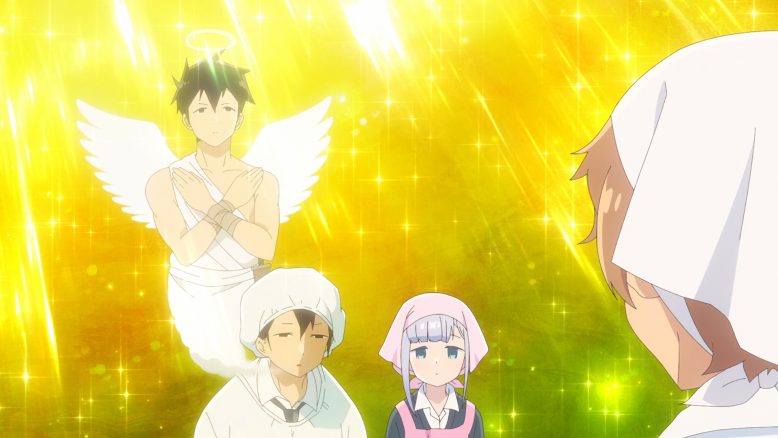 They have fun with the sillier moments

The show lands in the middle in terms of overall quality. It doesn’t need to look unbelievably good for the kind of story it wants to tell. It doesn’t look bad either however. The characters have nice designs and the silly imagination of Raidou is still allowed to shine. There’s a kind of pastel visual style that makes it really comfortable to watch each week. It doesn’t slack off either with only keeping to a few locales. For a show focused on a couple of high school students we get to see them in various locales. The school of course gets focus, but same goes for the homes of the main characters, parks, camping grounds, and various parts of the city they live in. 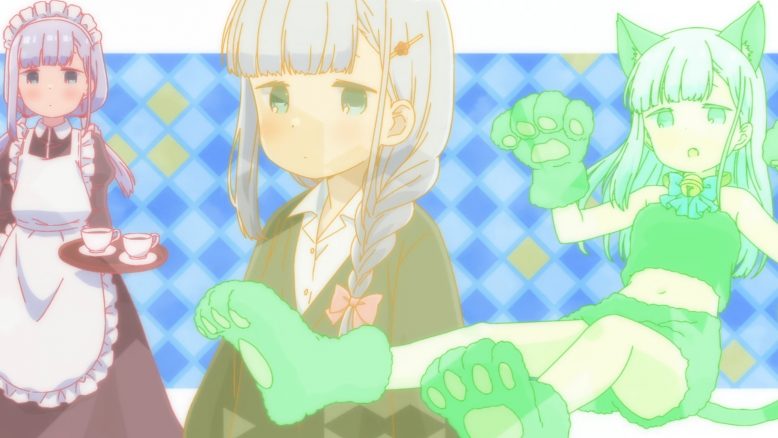 I’ll give credit to the opening for being one of the few this season that I always listened to. It is a really cute opening that highlights the main focus of the show. The main characters are what make this show shine so brightly and it doesn’t miss out on that. Those visuals along with a really upbeat song just makes it easy to enjoy before diving into any given episode. The ED is equally cute and doesn’t lose that focus on the main characters. An equally upbeat ending just in a different way. A great way to end an episode on a positive note.

The voice acting is nicely done in this show. Both Raidou (Terashima Takuma) and Reina (Minase Inori) have really good voice actors that know how to give them the right amount of personality. I especially want to give props to Minase Inori since Reina isn’t an overly energetic character. She definitely had to work to bring out the right about of personality. But there’s no question that she succeeded on that front. 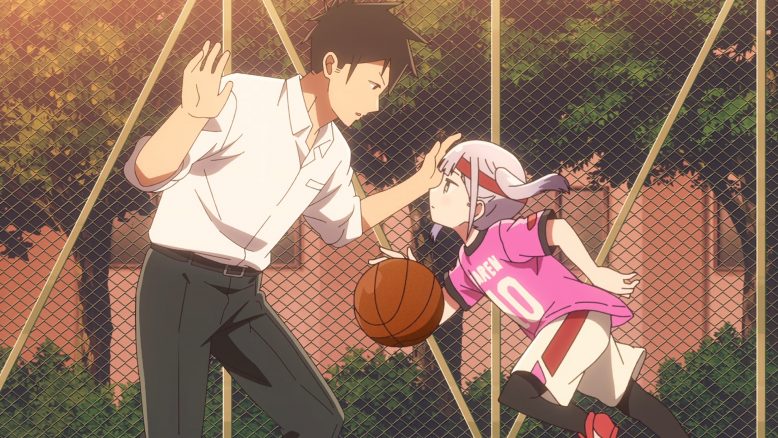 This was overall just a really enjoyable show. It was a complete story with room for more if desired. The early part of the show didn’t grab me immediately. So, I did wonder at times if I would even keep up with watching the show. It was the kind of slow burn that paid off by the end. Each episode heading towards the end just made me appreciate Raidou and Reina all the more. There weren’t a lot of episodes that knocked me out of my seat or really grabbed me. Once it got going though it was steady enjoyment. That kind of positive consistency is always appreciated. I don’t think it is an amazing series, but I do think it is a really good one. Definitely a B kind of show in my mind.