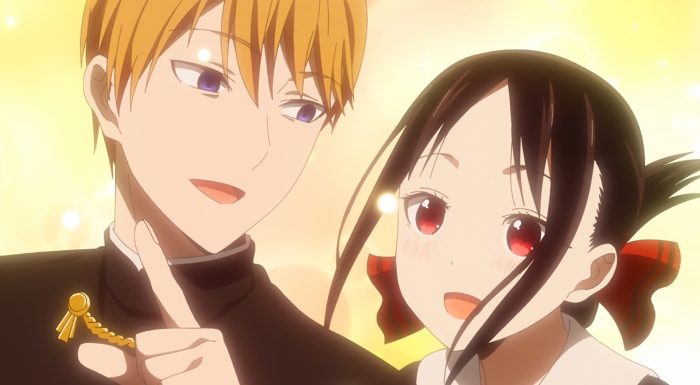 They’ve really set us up for one heck of a finale. I had that feeling when watching this episode as it is. But knowing we are set up for an hour-long finale next week only hammers that home. They really seem ready to give this season one heck of a send-off. They’ve already given this festival a lot of episodes and yet we’re not nearly done yet. This episode ended with a strong cliffhanger and established just how much pressure is now on both Kaguya and Miyuki to hurry up and confess. They are running out of time and there’s little room left to let pride continue getting in their way. 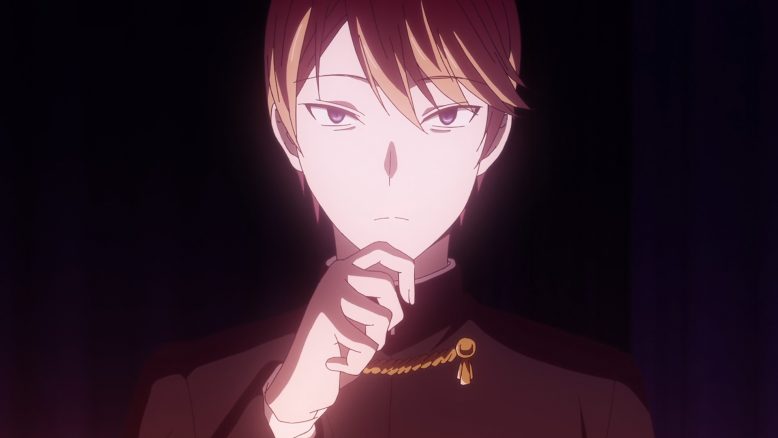 Little time left to play around

I was caught off-guard with Miyuki revealing that he’s going to Stanford next year! It’s not even on the level of him eventually going after his third year. He’s going after the end of his second year. I suppose that makes sense. What need would he have for the principal to get his letter of recommendation so early if he still had another year of schooling left? I just didn’t think he’d actually do something so downright bold like skipping a year and going overseas so quickly. It really does leave him little time to start dating Kaguya. If he misses this chance then it’ll be harder to get together after he leaves.

But it does make sense for him to do this. Miyuki is aware of his family situation and has always pushed himself to his limits. He works hard at school, studies harder, and even works part-time jobs. If he’s already got his letter of recommendation and is doing so well at school…why not hurry things up? The sooner he does that the sooner he can secure a good job. He can both support himself and probably help his father and Kei. It does mean losing out on a year he could spend dating Kaguya in high school. But…there are benefits to pushing himself. 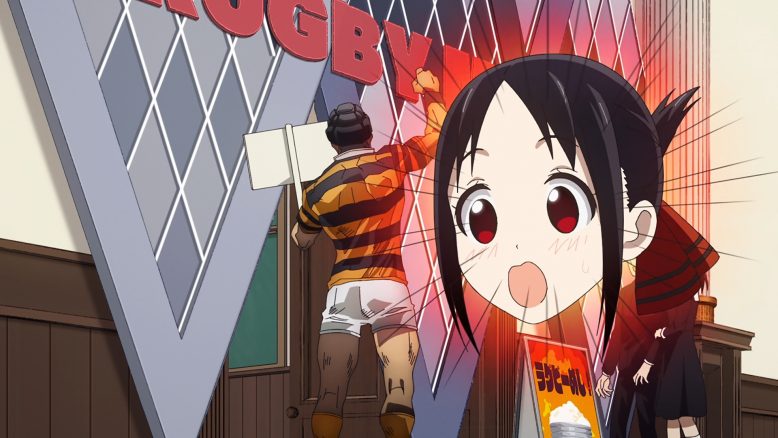 Now Kaguya is under the same pressure. I was wondering what might push Kaguya to confess anyways. But that seemed mostly resolved anyways with her understanding her feelings and deciding that it was time to get to confessing. Now she’s got this to deal with. It won’t take Kaguya long after the shock fades for her to realize how little time there is. Now she really has to make a choice. Can she afford to let this festival pass and keep waiting? Every day she waits is one less day she can spend dating Miyuki in high school. I’m sure it will be tough for her though. I don’t think she ever considered that Miyuki would make that kind of decision for himself.

It is kind of a shame for Kaguya since this day had been a blissful one overall. She got to enjoy the balloon animal (or heart) segment and even a nice little festival date with Miyuki. It makes sense why he was just fully invested in doing this even before any confession. This is his last festival and he doesn’t want to waste it waiting for a confession that isn’t going to come until later (if he doesn’t have to end up confessing himself). It’s also kind of great how things were going so well for her. Everything was coming up Kaguya. Ishigami was taken off by Tsubame, Iino went into an eating festival, Chika was distracted by a phantom thief, etc. She just got to have a good time even if she felt more embarrassed than he looked for much of it. 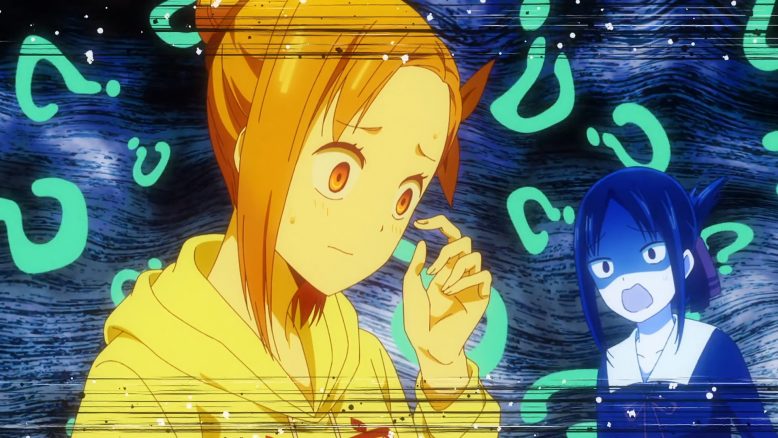 Ishigami’s festival remains purely hilarious. He has no idea what is going on around him. Tsubame is really pondering how she is going to respond to his confession and he’s just confused/worried about her acting distant for a while there. It does make sense that she started out just wondering how best to turn him down. Of course, his ‘confession’ was so effective because it was a fast ball down the middle. A contrast to the usual casual confessions she is used to. But she doesn’t feel like she knows him that well and there’s worry about how she’d handle things. I can kind of get her thinking there. Tsubame can see herself getting too invested, neglecting other things, and there is the reality that it would soon turn into a long-distance relationship.

But she’s not ready to turn him down. Thanks to him getting involved with Iino, she got to see a different side of him. Now it’s not a big deal that she saw him get a bit angry. The key for her is that this made her realize there are sides to Ishigami Yu, that she’s yet to see. And it isn’t a bad idea to wait on responding to that confession until she knows him better. Because she might just be ready to accept that confession after doing so. On that note though…Yu was right about Iino. I love that girl, but it is concerning how easy she is to manipulate. It didn’t take much for those guys to get her schedule and convince her to hang out with them. Not that she doesn’t deserve to have fun. But she does kind of need someone looking out for her. 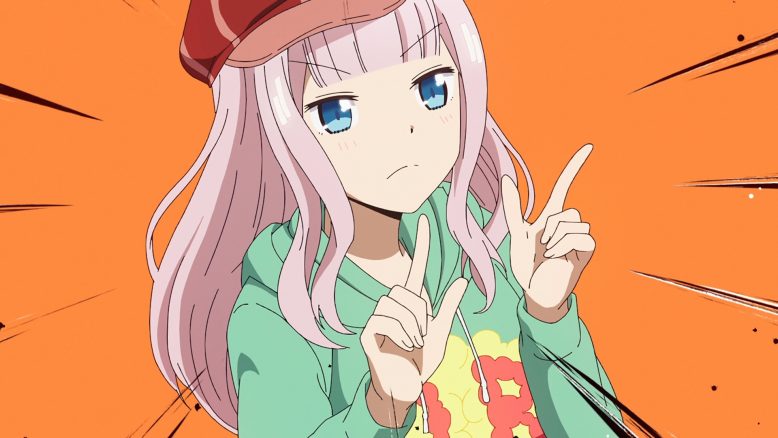 We even got to see the Love Detective get confessed to. It’s a good look at how things might actually be going for Chika behind the scenes. Probably isn’t the first time she’s been confessed to. And I wish the best of luck to anyone that does catch her eye. Chika can say what she’d like about Shirogane and Yu, but she’s got quite the list of issues herself. Any guy that can actually get her to fall for them is in for quite the experience. But on the positive side she is a master of refusing guys. The whole situation was utterly weird and yet the guy left not feeling bad about it. 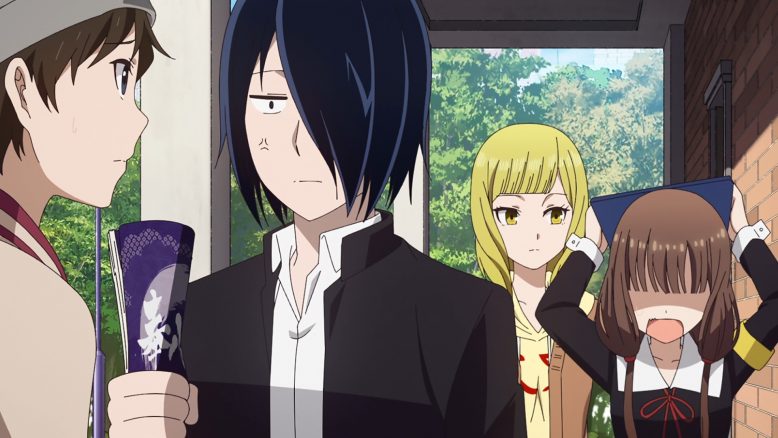 Iino needs a bit of support

I’m definitely excited for what is coming our way. They’ve basically turned our last couple episodes into one big epic. It seems unlikely that we won’t get a big confession this season. The question really is whether Kaguya gets the confession she’s wanted or if she just goes for it. It doesn’t seem as necessary for her anymore to hold back and wait. But we’ll see what happens when push comes to shove. Either way I expect that things will finally take a step forward for them. I’m not sure about Ishigami and Tsubame though. On one hand it seems like she’ll wait a while to respond to him. But on the other hand, she told Kaguya that she would give him a response. I suppose that response could be that she’s going to wait to sort out her feelings first. I can’t wait to see how S3 wraps up.