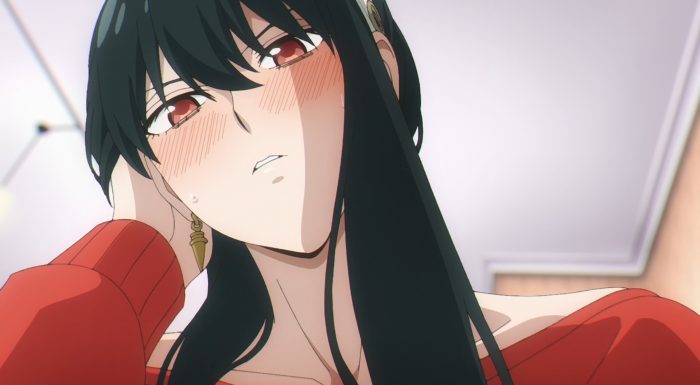 This episode gave me everything I could have asked for. The previous one set things up for a strong episode and this one absolutely delivered. The immediate continuation on the dinner with Yuri was strong, but also the spy mission on Yor really made for an eventful episode. Both parts connected nicely and gave us a lot to dig into. We are still clearly in the early going for this series and this family. But there’s a lot of potential in how things can develop. All the more so since I’m sure a few more notable side characters will be added to the mix over time. But the big thing for me is getting to watch this family continue to grow closer and into better people. It’s a nice thing to see something fake develop into something real. No matter how cheesy it might be to say. 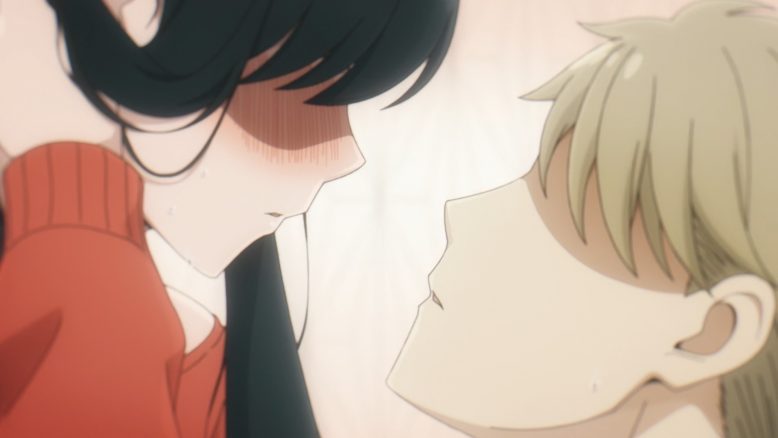 Yuri will see this in his nightmares!

Yor at present may not be able to handle kissing sober, but she can most definitely get the job done when drunk! Love how quickly she shut Yuri up as well with a very effective fork throw! Also, it has been a while since the OP of the show acted as part of a cliffhanger! Cutting off on the impending kiss like that. All the more entertaining since it doesn’t exactly fit the tone of that moment XD. The kiss of course didn’t actually happen. I’m actually fine with that. Being a bit silly, but I like the idea of saving a real kiss between these two for a moment when they both actually want that. Not to protect a cover or sell their marriage status. But rather just being something that naturally builds up between these two.

Especially since it truly feels like it will happen eventually. This family might be fake in some ways, but there are real feelings growing there. At this point Yor can’t just go and kiss Loid even to protect the story. But that’s partly because it would be her first real kiss, it’s a bit embarrassing to do so, and because there is something there. Considering how far into the season we are, I don’t expect to see the kiss coming this season. But I could possibly see it happening in the second part in the fall. That definitely feels possible. 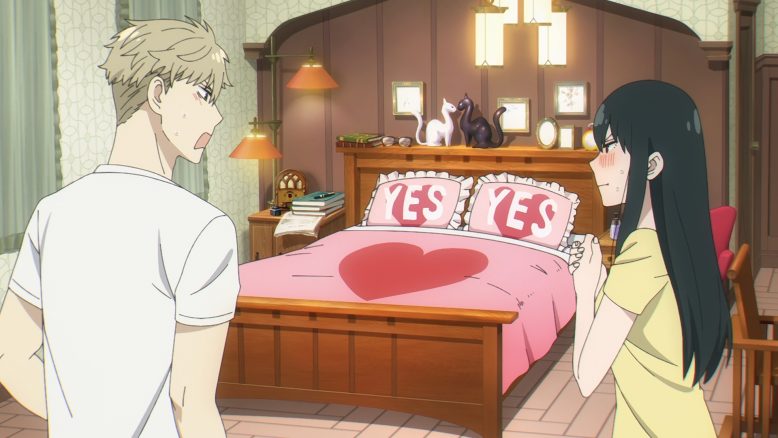 The real quality of this family is reflected in Loid as well. That Loid had to mentally remind himself that Anya isn’t his real daughter when talking to Yor after dinner says plenty. This family does mean a lot to him. Even if he can still attempt to logic out the realities of his situation. Having a sweet daughter and having a great wife is giving him the kind of family he’s been lacking. His envy wasn’t something made up to convince Yor of anything. He truly felt envious of that sibling bond. Even if that sibling bond is really crazy with how insane a siscon Yuri is.

And I did love him and Yor initially heading to the same bed before reminding themselves that they slept in different rooms! These two will have such a great love life in the future. It’s already good, but when they don’t have the excuse of things being fake it will be even better. 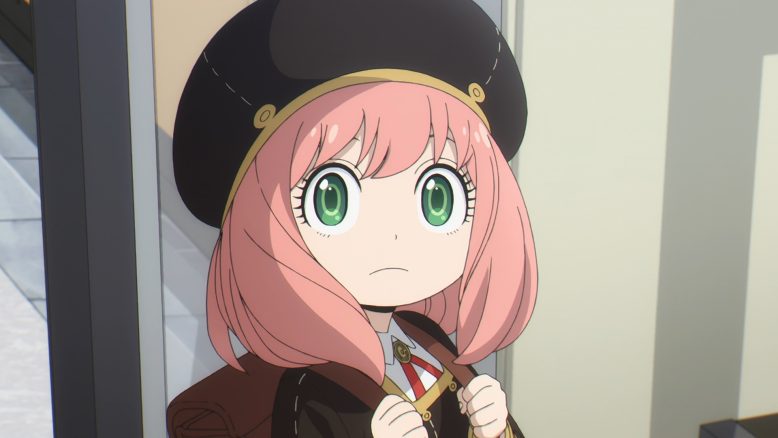 You could feel the worry

What is most shocking is that it took this long for Loid to have any suspicions about Yor. You’d think her supernatural strength, agility, and threat level when drunk would make him think on things. But those are just cute quirks XD. Her brother being in the secret police at least made him think on things a bit. Although he’s giving her way too much credit to think she could go this hard undercover to try and get close to him. The most subtlety she has is politely asking her victims if she can kill them. I like at least that he really struggled with even putting a listening device on Yor. Even with the risks of her being a threat, he couldn’t just do that without thinking. He cares about invading her privacy. Not enough to not look into things, but at least he hesitated.

It was nice in a way though having Anya look distressed over Loid suspecting Yor. Yes, in part it would ruin the excitement if Yor wasn’t there anymore. But she also loves these two. Having all of them together is a huge part of why she’s so happy now. She held up on revealing her powers, but that only left her more distressed. It’s not like she can say everything without revealing that she knows more than should be possible. All she can do is…hope for the best. Yor isn’t part of the police so there’s no worry there. But…if he found out that she was an assassin then things could get complicated in a hurry. 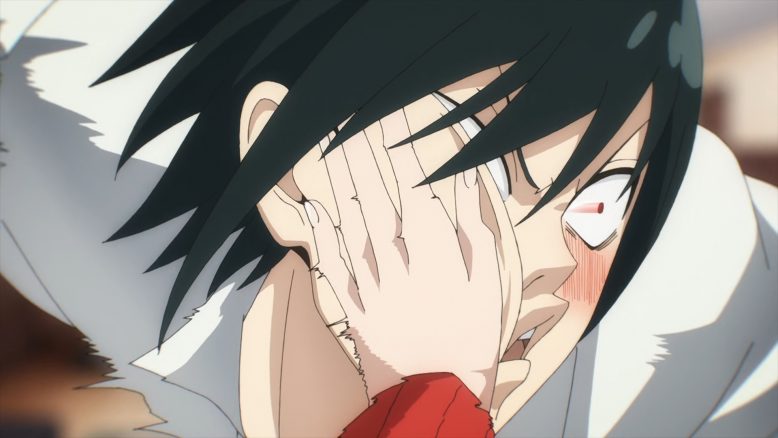 This show is just so freaking good. They really went to the hilarious limit of having Yuri’s flashback happen at the perfect time. The mostly cute memory of getting a kiss on the cheek as a reward and promising to marry his sister getting shattered by the reality in front of him. And they just had it play out in the best way. Yuri utterly sabotaged himself there. While drunk, he did challenge them and oh boy was that challenge accepted. The Briar siblings are amazing drunks and I kind of hope to see them drunk more in the future.

Credit to Yuri though for surviving multiple strikes from Yor. Even if we presume embarrassment slaps aren’t tapping into her full potential…she does have superhuman strength. That he walked away from this dinner at all says quite a bit about his durability. I’m not so sure about his sanity though. Both upset at himself for not bugging the Forger home, but also relieved since he couldn’t handle hearing anything too explicit. 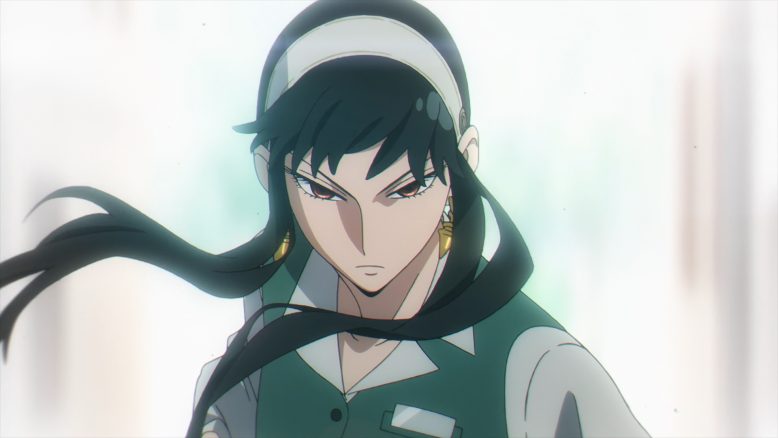 Do not mess with the badass wife!

It was tough seeing Loid putting the pressure on Yor there. Although I appreciate how she handled things. Scruffy was doing his best to play the role of creepy secret police and in a sense it helped. He set off Yor in the right way. It’s kind of awesome how she takes down people she thinks are secret police with the stance of her being a married woman. If things were taken too far…she might have actually killed them. In that sense it was a pretty dangerous game to play. But at least it didn’t give away Yor’s real secret and Loid ends up feeling comfortable again. Although not without a sense of guilt for doubting Yor. He can be warned until the end of time. It doesn’t matter. He is developing real feelings for her and that guilt is important to feel. 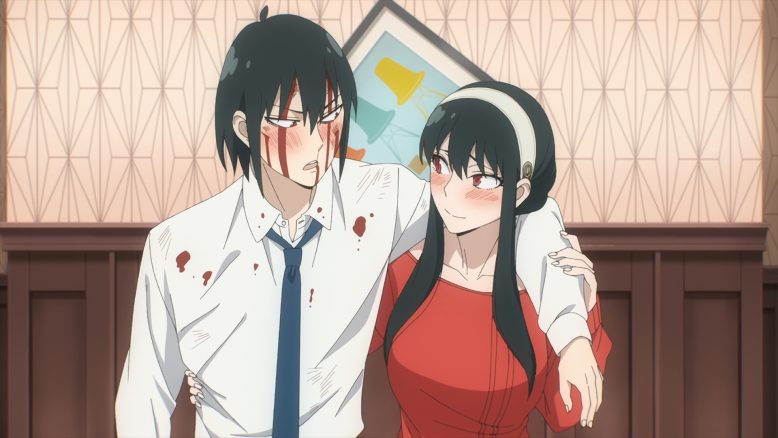 Just a normal pair of siblings

There wasn’t a whole lot of Anya in the past couple of episodes. But it is Spy x Family. Different characters need chances to shine and some character arcs can’t fully develop if Anya is in every scene. Giving her some distance and then focusing on her when the time is right makes sense. I honestly enjoyed getting to see Loid and Yor interact. These two are both awesome and their sillier aspects allow for the comedy to land so well. Not sure what the next threat to this family will be, but I’m sure they will handle it pretty well. For the time being the obvious issue is Anya’s grades and the distance to the main goal for Twilight. And the tsundere Damian will likely continue to be an issue for Anya at that school. Hopefully he doesn’t do anything to make her punch him again though!