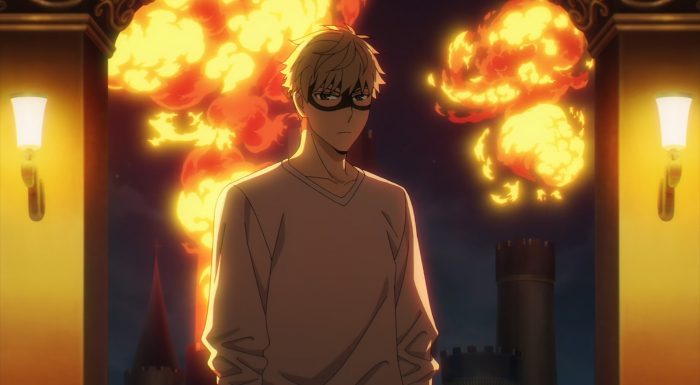 You can tell that they had a lot of fun with this episode. If this is how the Forger family celebrates Anya getting into a big school, I can’t wait to see what they do for other occasions! I’m not even entirely kidding there since I half expect that Loid would get dragged into some other ridiculous event the next time Anya manages something eventful. Or heck I’d kind of want to skip a year to the future to see how he’d have to celebrate his one-year anniversary with Yor XD. But for now, the focus is on Anya getting into that school so Twilight can continue his mission. In some ways it is funny how that issue got resolved relatively early in the episode. The rest of it was just pure celebration! 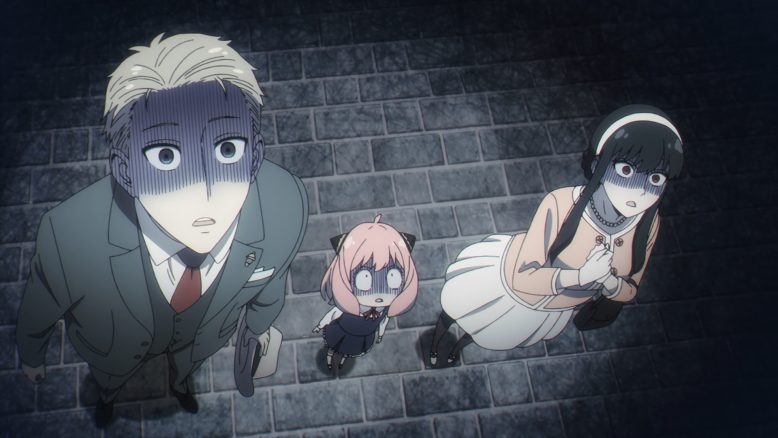 This show has great expressions

The main characters were bound to get a scare when it came to Anya getting into the school. Just too easy to have her make it immediately. And it does kind of fit considering how close they were to killing that idiotic teacher in the previous episode. Even if Henderson backed them up, it isn’t as if Anya was at the top of the academic pile either. So, it was a pretty fair move to have her make it…on the reserve list. I’m good with having her at the top of that list so there is less stress on waiting for enough people to drop out. All they needed was a singular soul and that was rather likely. Circumstances change and it’s possible for someone to need to turn down the offer.

Or maybe people just reconsidered after being chased by a stampede and put through a brutal interview? I can imagine a few people that endured Swan’s harassment deciding that it wasn’t worth putting their children through more trouble. And all of it was worth having Yor imagine going on a killing spree to free up that spot for Anya XD. She really has become quite the mom XD. It’s absolutely horrible, but I couldn’t help laughing. Someone using the whole “I have a family” to try and save their lives…only for that to be the very reason she’s assassinating them. Of course, if Anya was further down on that waiting list I have to wonder if Yor wouldn’t have actually done it… 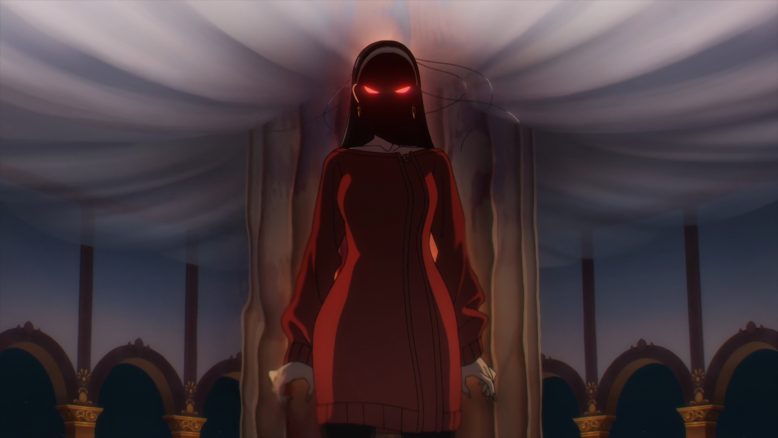 Too many great drunk Yor moments

Yor’s steady companion for most of this episode was the bottle though. They got her drunk pretty fast and she was just gone for the rest of the episode. I’m sure she was pretty stressed out though. Even if she didn’t have a big operation like Loid, this family is a comfortable place for her. If Anya really failed then it might be over for them all. I get her wanting to drink a bit and trying to relax. It just meant that she was totally drunk and being dragged along on this over-the-top adventure.

All of that building up to her having a pretty intense 1v1 with Loid. I’m not sure if her being drunk made her more or less dangerous. Her restraint was out the window, but you’d have to imagine her movements weren’t nearly as crisp as normal. Yor was a beast regardless though. She did almost kill him, even if Loid was hesitating because he doesn’t want to fight Yor. He didn’t have much luxury to think and was in a bad position. At the very least her being drunk saved the day since one fall (from her heels failing her) and she was unconscious from that point on. It’s weirdly funny as well that after she fell asleep that she was left passed out on the floor until they were ready to head home XD. 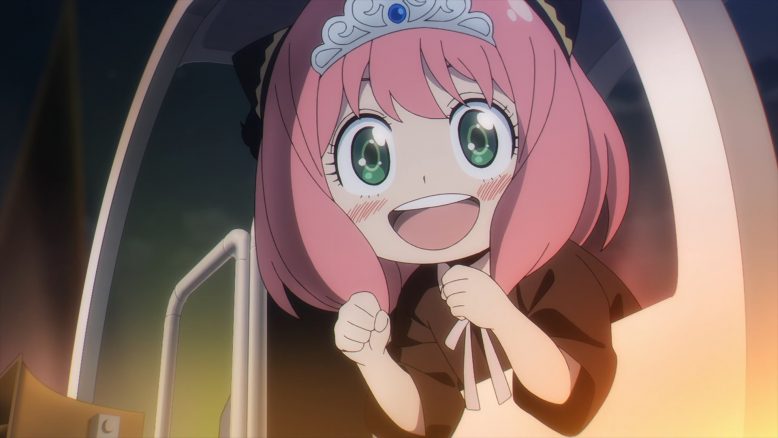 Anya is a treasure. That’s not an overly creative thought, but I needed to state it. Even if it was for her own sake too, she did push herself to make sure to get into this school. So, it’s fair to give her a bit of a crazy reward for all that. Plus look at her all hyped up before they went flying! This girl is having the time of her life. Something that is deserved after she spent all that time in a lab. It was definitely ridiculous, but very much the kind of thing a kid like her would dream of. She got to see her father being awesome and even surviving a showdown with his wife XD. I’m glad she’s still ready to give her all for the trials ahead. Getting into the school was a valuable step. But she’ll definitely have more to do. 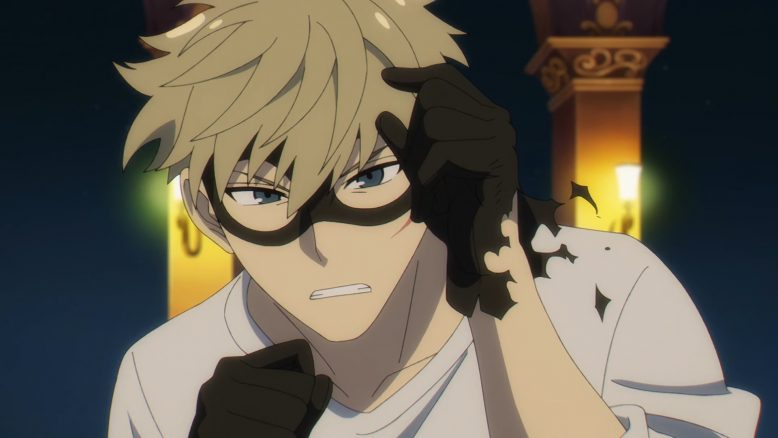 I also just want to give Loid props. He had to go through a lot here. At least the pride his allies have in him is still good and strong. He just rolled right over them on the way to Anya. The show having the music going all out during a few of the action scenes was appropriate. In a situation like this you have to go all out. Playing Loid up as a crazy action star in a situation that was all about giving Anya an experience equal to her Bondman series. That isn’t what the show is likely to be for most of it. But once in a while is perfectly fine. Now the show can move ahead and show us where things are going next. Anya has made it into the school…but now she’s actually got to go XD. 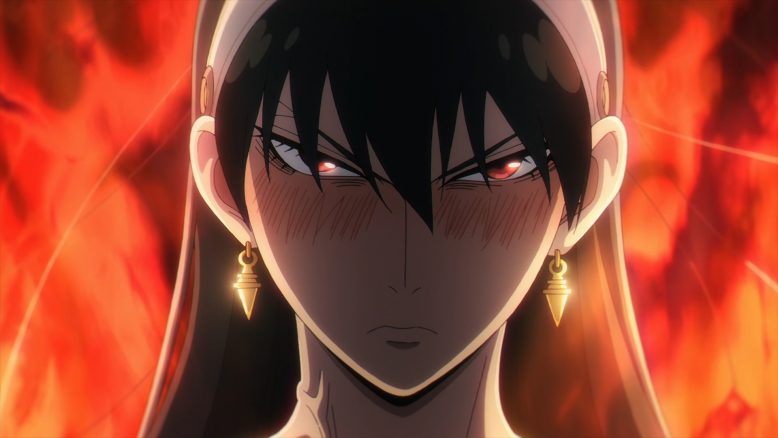 I had to include this one

This episode was pretty fun. It was a bit much at times, but I think it wouldn’t have worked so well if they didn’t go for it. The last episode was better with the great tension and the strong emotional moments during the interview. But this was a purely fun episode that still was worth watching. They definitely padded things out a bit in order to let the episode end with that Loid and Anya moment. We’ll see how the pacing goes the rest of the way, but I think we’ll be fine there. They know there is another season coming up in the fall so they’ve got room to plan out the pacing in whatever way feels appropriate. Every week I can’t wait to see how the next episode will play out and that continues here. I’m sure the next one will be fun too.