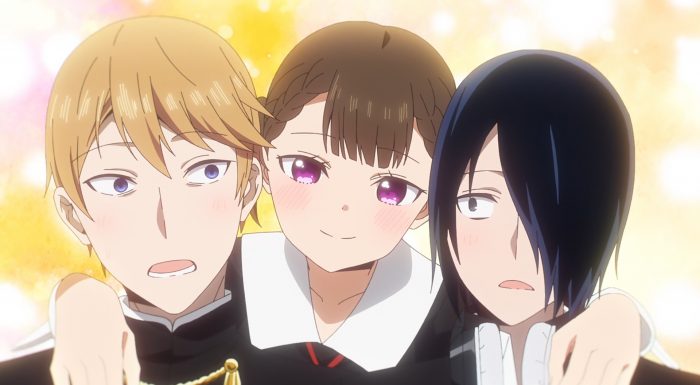 The effort that goes into Kaguya-sama is part of what makes this series as enjoyable as it is. It would be incredibly easy to just animate this series with a whole lot less effort. And it would still be good. But this episode shows that putting in the extra effort allows it to be excellent. They outright gave the special ending of this season to the student council rapping. And this isn’t even on the level of Chika just doing a solo performance like in season 1. Instead, they gave it a different visual style and just went all out in giving the various characters something to do. Even if the most Iino and Ishigami were doing was just dancing and providing backup to Shirogane and Chika XD. 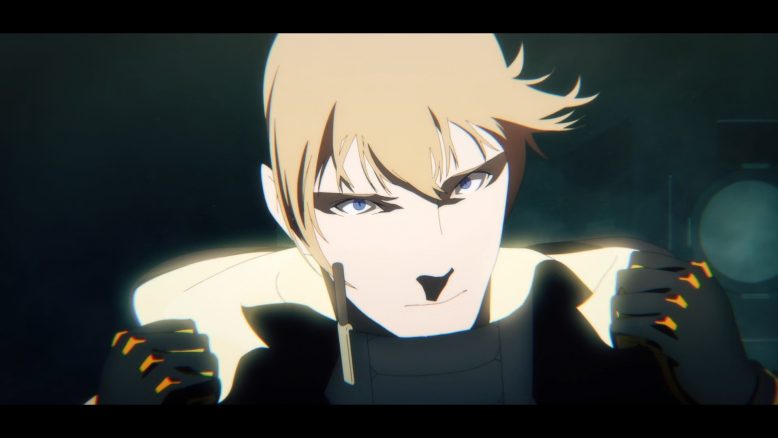 I’ll admit that rap just isn’t my thing. So, I’m sure this episode didn’t resonate with me the way it likely did for people that actually love rap. I do find it weird that this is the second anime I’ve seen this season (first being Aharen-san) that had a rap focused episode. Mostly since I can’t recall many anime over the past few years that had rap focused segments in them. But regardless that was the vehicle chosen for Shirogane’s attempt to reach out to Hayasaka. I suppose it makes sense since his singing was so bad that it caused physical suffering to the poor girl. The damage only seemed to spread from there. Kei was actually trying to get someone to murder her brother! It was that bad! Poor Chika wasn’t immune to the suffering either. I think she actually did die for a moment there.

Funny how Kaguya remains utterly in the dark about how incompetent Shirogane is at various things. I suppose it is cute how it keeps him utterly perfect in her mind. But I do hope at some point she is brought into the loop that he isn’t perfection incarnate. There is a good story to him improving through hard work and determination. But for now, Kaguya is seeing all the good. Well, I suppose there is a downside in all this. Since what she sees is the guy she likes spending quite a bit of time with Chika and Hayasaka. Kaguya hasn’t gathered the will or courage to confess herself. So, it has to be even more uncomfortable seeing him spending time with these fun and likable girls while she hesitates. 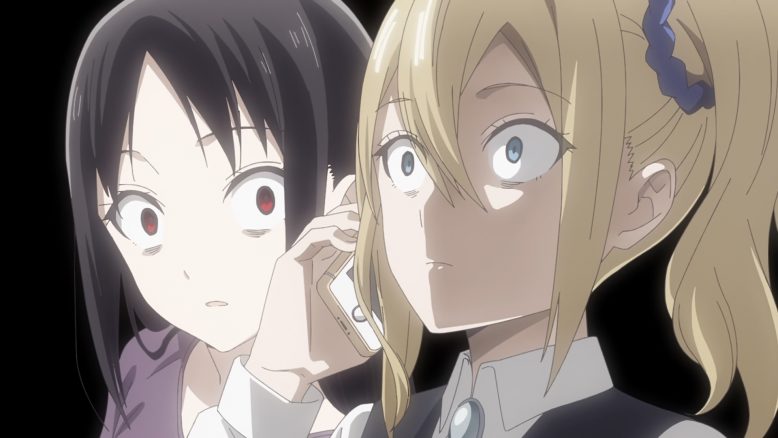 Quite an episode for Hayasaka

I’m happy for Hayasaka in getting a friend in Shirogane. He has a pretty good grasp of who she really is. There aren’t a lot of people that really get Hayasaka or see the full picture with her. For the sake of Kaguya and her family, Hayasaka has sacrificed a lot. She can’t really have a normal school life and be herself. She has to play roles at school, roles when someone like Chika visits, roles when assisting with Kaguya’s schemes, etc. She has gotten really good at it, but that has to be a chore. The more people she can rely on the better. But for now just having even one more friend will be good. And it’s something she can use to mess with Kaguya a bit. Something that is pretty justified since Kaguya can only blame herself for dragging things out as long as she has.

In that sense I’m glad Hayasaka found time to complain at Kaguya during her ‘rap’. The visuals just added nicely to the whole situation. Having her just chase down Kaguya and hammer home how much she’s doing for her. Hayasaka has less job freedom than people working full time careers. She has to go to school and everything else is basically dedicated to Kaguya. Part of it is the Shinomiya family, but Kaguya herself also puts Hayasaka through a lot for the sake of her ridiculous schemes. This season has been great in a sense for airing some things out between these two. It lets Hayasaka grow from simply being a background individual that helps out Kaguya’s plans. 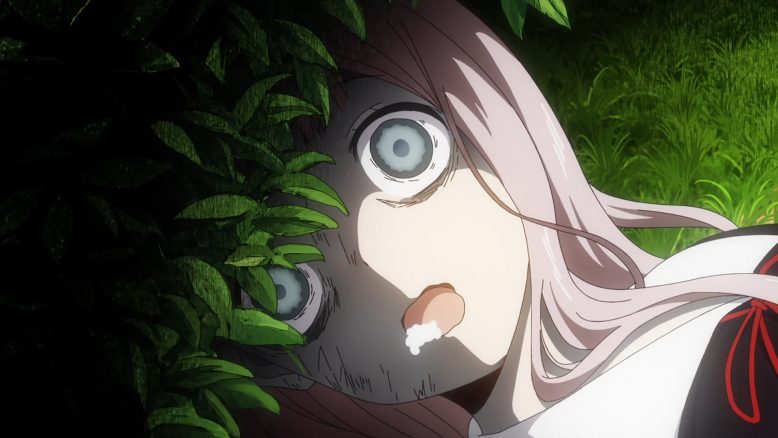 There’s no avoiding the hilarity of Miyuki teaching Chika about rap…so that she could teach him to rap. It’s actually kind of hilarious in that sense. Chika does have great talents, but it is a reminder that she’s not an expert on everything. I suppose you could also say it is a lesson that there’s more to rap than you’d think. But that’s not going to make me like rap. That’s just never going to happen in this lifetime. So, the actual rapping in the episode was almost a negative that kept it from being a top tier episode. But it was all the other things that allowed it to shine.

Chika was just left in utter agony in realizing that she has put in all that effort…only to get to the starting point. The point was to help Miyuki express his feelings to Hayasaka. After all that grueling training…Chika still had to suffer through Miyuki’s awful rapping skills! In that sense I appreciate how they are finding ways to change up the ‘Chika teaches Miyuki’ segments. And I never realized how much the world needed to hear Chika screaming “motherfucker!” 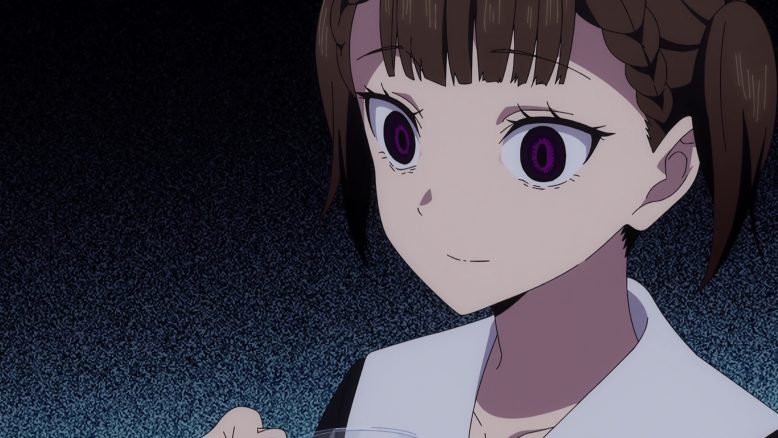 Someone let this girl be happy!

Maki is a sweet girl. I know that on some level she talked about wanting to break up the Kashiwagi couple. Also it is hilarious how Tsubasa is such a background individual that none of the main characters actually knew his name until now. He really was just “Kashiwagi’s boyfriend.” Points to Maki for caring enough to actually remember his name. The girl is such a prime example of what Miyuki and Kaguya are flirting with becoming. And I share the call to give the girl a break and let her move on. Making her suffer through this forever would just be cruel. That couple isn’t breaking up anytime soon. Anything is possible, but they are really intense at this stage. It’s not likely to happen while they are still in high school at the very least.

The good thing is that she has friends. Honestly, her friendship with Ishigami and Shirogane is really sweet to see. She might have wanted to mess with Kaguya a bit, but I don’t doubt that Maki was being completely honest in calling them her friends. They understand how miserable that situation is for her. There isn’t anything either guy can do about the situation. But sometimes having people to lean on during tough times helps. I honestly don’t know how much longer Maki could have lasted without running into those two. Even if the story won’t let her move on, at least it is allowing her to have good friends. It’s not just a one-way street either. She honestly does hope they will avoid making the same mistakes she has. 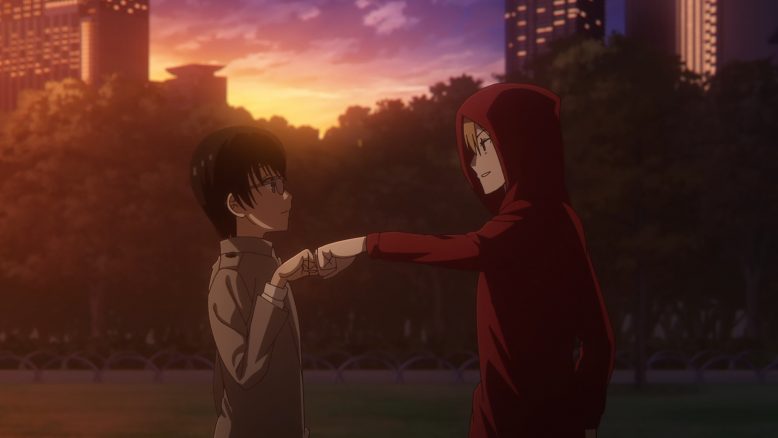 The fist bump of friendship!

This episode was just really good. And that’s even with the rap side of it not grabbing me at all. It was just a good episode about Miyuki working things out with Hayasaka. In a sense both Hayasaka and Maki earned their wins for this episode. Both of them gained important friendships that can support them going forward. It allows both girls to drop their guards a bit and just be themselves. This is a romcom of course, but friendships are important too. The supporting cast of this show continues to be fleshed out and that’s great to see. I can’t wait to see how the rest of this season will unfold. It has already proven to be a great one thanks to allowing the full cast to shine as much as possible. And that’s also thanks to the animation team being amazing.