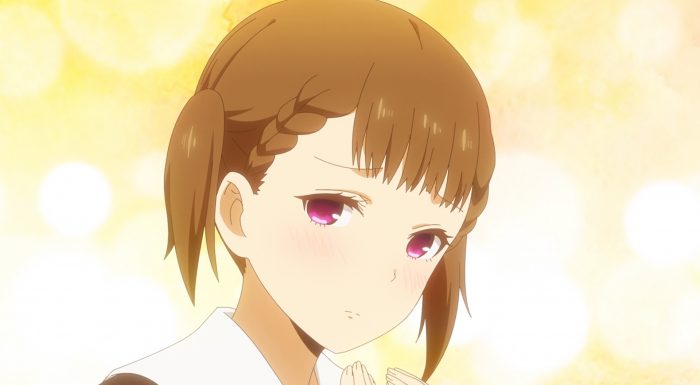 This show delivered yet another episode full of impact. The main and supporting characters in this show have so much personality that when they go dark it can be quite the spectacle. Kaguya and Kashiwagi especially are a dangerous pair when they get on the same page about cheating…But it wasn’t just about those two. This episode delivered another great series of moments from Maki making her official introduction to the series to the surprisingly emotional Ten-Yen game. Even though the episode can be neatly broken into three parts it still felt really fulfilling and steady in terms of pacing. All the parts fit pretty nicely into this episode and didn’t feel rushed. 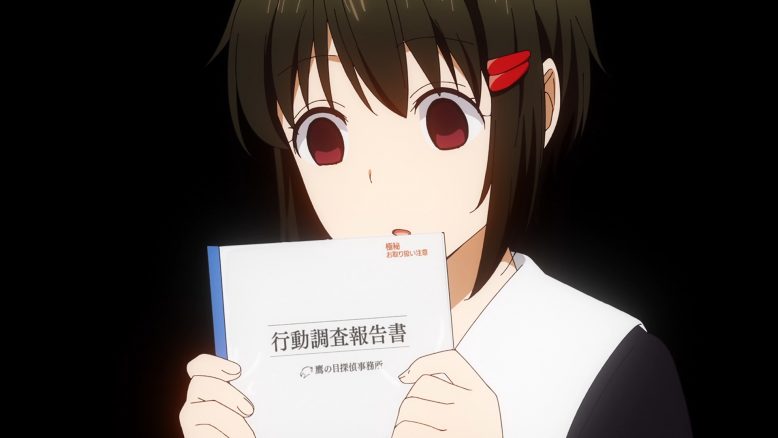 Wow, this girl is scary

Iino had a tough time being the voice of reason in this one. Not that she’s always the voice of reason. But when it comes to Kashiwagi and Kaguya’s extreme views…she really was the only sane person in that room. Just being exposed to a list of potentially criminal activities and open intentions to kill. Poor Iino was reduced to listening to her “comfort music” in the midst of this one just to maintain her sanity! Of course, the best part was the one time she had Kaguya potentially ready to argue against cheating…Iino flipped! It made perfect sense of course. Kaguya suddenly was desperate to prove that Shirogane wasn’t a cheater since that’d be bad for her.

Maybe my favourite part was Kaguya being so utterly enraged about the tutoring thing. Well done by the show with that cut to Chika helping Shirogane out yet again. It probably would lead to a breakdown by Kaguya if she ever realized how much time Shirogane has spent alone with Chika… 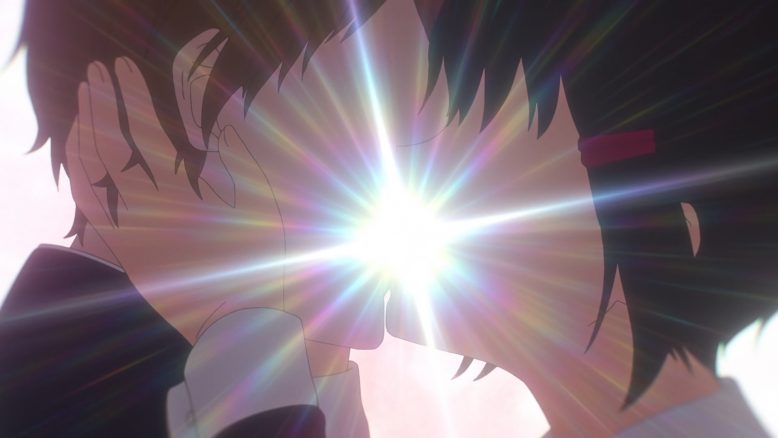 A kiss too intense for this cast

Everyone got devastated by the end though by that make-out session. The entire student council was just taken down by that one. Though of course only one person was hit hardest by that scene. And it was naturally the one that tried to recommend a bad present and (maybe) set up suspicious scenes to try and force Kashiwagi to break up with her boyfriend. Not that I don’t get the position Maki found herself in. The guy she liked ended up confessing to her friend and she was left to stew on it. Confessing herself at that point would just end in further pain and so…there she was. It is hilarious that Shirogane was more correct than he appeared back in season 1. Kashiwagi likely didn’t really have feelings to start and was just shaken up by the confession. But Maki was legitimately interested. 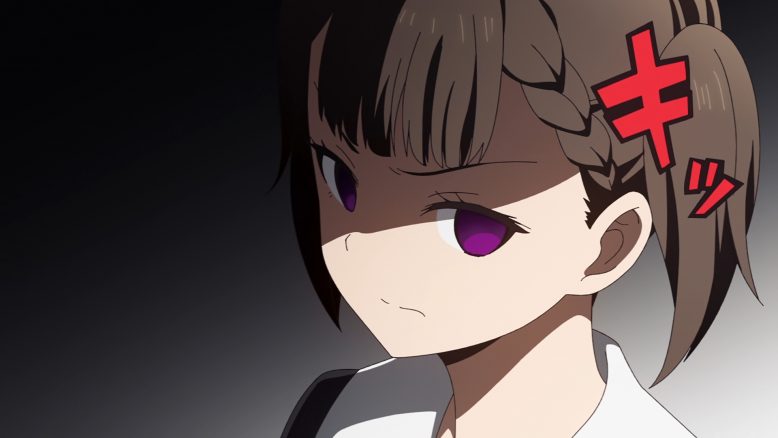 This girl is fun

Maki is a great example though for Kaguya and Shirogane. She basically had the same mindset as them. Her pride kept her from confessing when she had the chance. The only difference was that he wasn’t necessarily interested in her. Therefore, when it came down to it…he just confessed to someone else. She was left with nothing but her pride. That won’t turn out the same for the main characters since their feelings are mutual. But Maki shows how stupidly fortunate they both are. If they weren’t as interested in each other as they are then either one of them could have been left with the same regrets as Maki.

This girl has been hanging around the edges of the show ever since that couple was introduced. So, it was nice to just get to dive into her head a bit. In the end she’ll certainly live through this. But it is a rough spot for her. The one good thing about all this was that she did gain people to confide in. I really doubt she’ll steal the guy away. But having people that she can vent to should help ease her stress. Not like she can confide in her friends…since one of them is dating the guy! And even just confiding in a friend that isn’t could be risky. Hopefully having Shirogane and Ishigami on her side will let her eventually move on. No point torturing herself about this nonstop. I don’t blame them for helping out either since when she does turn on the charm…she is cute. 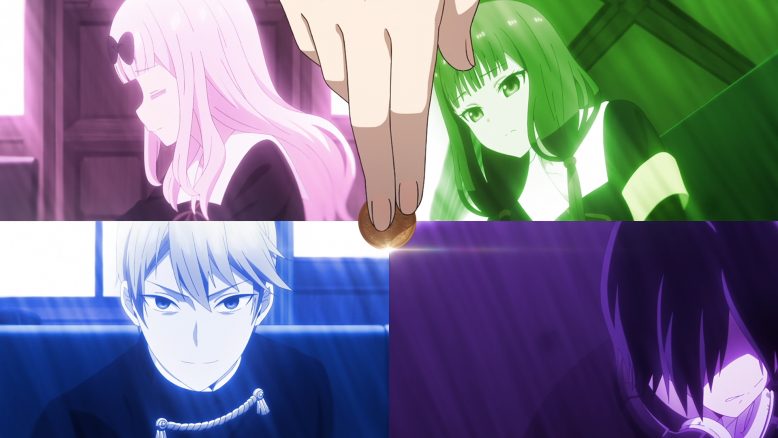 This was both fun and surprisingly emotional

This show has such a good time when it comes to games. This one was a lot of fun and created some great moments. Confirmation that all but one member of the cast is in love right now being the first thing. That’s fairly interesting in itself. Kaguya and Shirogane are a given and I’m glad they had Kaguya confirm she was answering yes there. Ishigami might have feelings for Tsubame from the cheer club since he did mention her in the previous episode. I haven’t seen Chika showing romantic interest in anyone so maybe she’s the one that answered “no”. I’m not sure about Iino either. I guess you could say she’s in love with the person that gave her that letter back in middle school.

Of course, Kaguya tried to use knowledge of who held what coin to manipulate things. That girl just can’t help herself! I’m glad that Shirogane pretty comfortably avoided getting into a hot seat with Kaguya’s question. At this point he knew she was trying to pin him down and just made a quick move to avoid it. The best part of course was that just about everyone besides Iino had been keeping track of the coins and using that to try and peer at the true answers. That’s probably why even early on the group was mostly using the same coins to protect themselves. 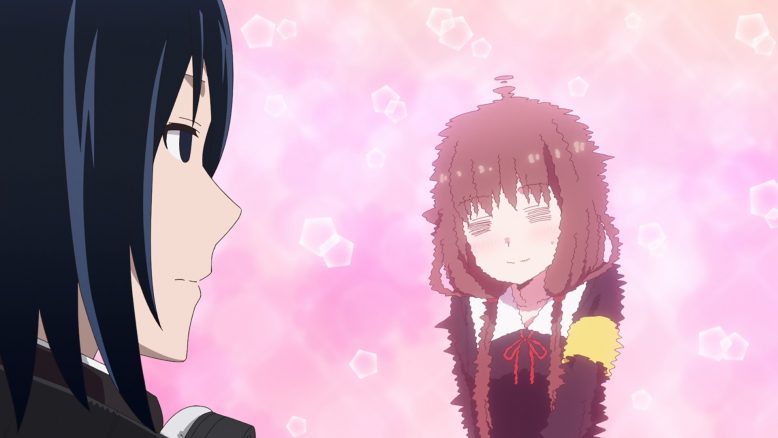 A happy Iino is a treasure

The second question was both heavy and great. Ishigami just straight up needing to know how the people around him feel. The guy has confidence issues and Chika and Iino especially have given enough impression for him to wonder if they hate him. It was just nice for him to get that win. Even Iino had to admit to not hating him in that moment. Of course, they both had to fire shots back and forth even on this. Iino upset that she was basically made to admit not hating him and Ishigami treating her like a non-human entity.

And it lined up perfectly with Iino’s question. It really shows how she and Ishigami are more similar than they’d ever admit. Both of them have real confidence issues and feel like others must secretly hate them. It’s nice that both times things worked out fine. They both need to feel a bit more confident in themselves. The people around them aren’t faking it or pretending. They are both accepted and needed in that student council. Iino just melting from happiness was too perfect. Fair enough comment by Ishigami that she needs to avoid situations like that since she is way too easy a mark. But it is nice that she got to feel appreciated. 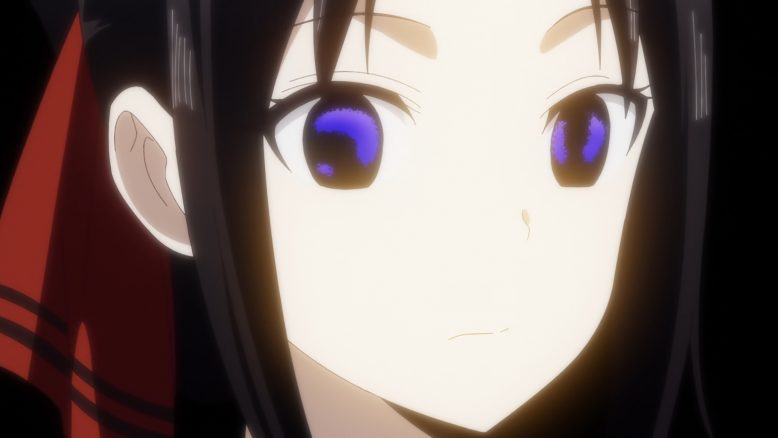 Run for your lives!

This was another top-notch episode. It might be the best episode of the third season so far. As always, the show just goes above and beyond to make each moment hit. When the characters start going to a dark place…the screen sometimes went just as dark to match. They build the atmosphere in this show not only with great voice acting and animation, but just how it presents that animation. Some moments just absolutely came to life for that reason. One example being Kaguya absorbing the darkness that Kashiwagi was exuding during her suspicions and turning her own eyes black. This show wouldn’t work as well if not for the amount of passion and effort going into it. 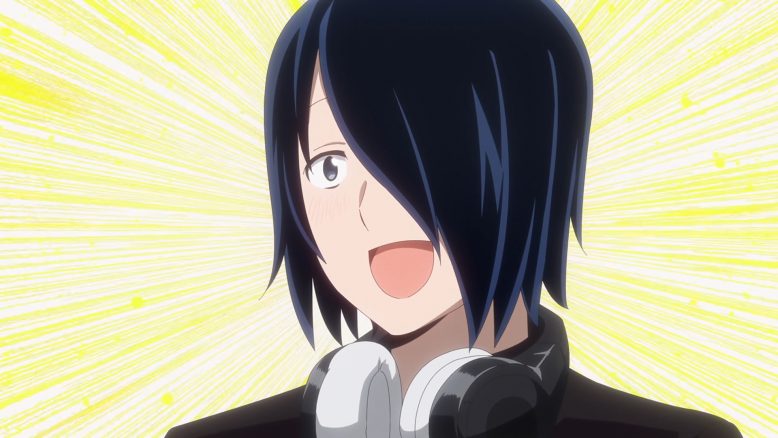 A happy Ishigami is also appreciated

I can’t wait to see where things go from here. Ishigami and Shirogane have been recruited to help Maki’s efforts to break up the side couple of the show. We also got to see Chika helping Shirogane practice rapping and I could see cutting back to that scene next episode. And there’s still all kinds of potential when it comes to Iino and Ishigami. All of that and of course there’s still the main pair of this series. I’m curious how much closer they can get until someone gets over their pride and confesses. No matter the focus, I’m sure the next episode will be a lot of fun. This show rarely lets me down and that’s continued right into a third season of it.