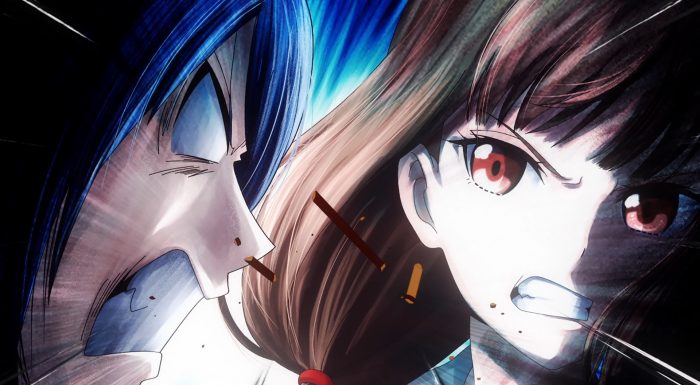 It is funny how much I’m loving the interactions between Ishigami and Iino despite them battling it out like cats and dogs each time they get too close. They do seem to be setting up more moments between them considering the first two episodes of this season has opened up with skits focusing on them. One would think they aren’t doing that just to conclude with them killing each other. But you never know I suppose. If nothing else though we should continue to get more moments for these two and the potential hope that they can stop simply helping each other behind the scenes and just openly get along. At the very least they are already entertaining and we’ll see if anything actually develops here in season 3. 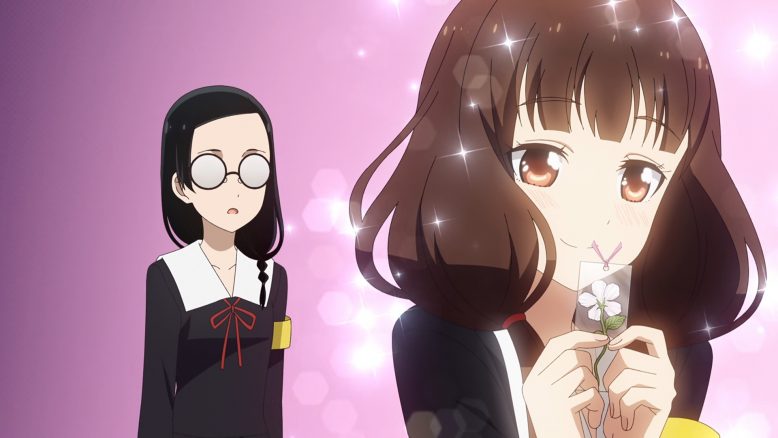 Iino is easy to win over when she sees good will

Of course, if any blame wants to go around for why they couldn’t get closer in this episode…it probably goes to Iino. She didn’t need to come up with a laundry list of good qualities for Ishigami. But she couldn’t mention anything. The worst thing of course was that she legitimately felt like she couldn’t come up with anything. Not quite a “I don’t want to say” situation and rather a “I can’t come up with anything” one. I suppose Shirogane’s friendship plan only could have worked if they actually had the ability to both complement each other. It’s all the more of a shame since Ishigami actually did have the ability to come up with things. But I guess Iino needs to look a bit closer first.

It is just funny with how hard these two work to support each other. Ishigami has done a lot behind the scenes in the past and present. Of course, part of the reason why he failed last episode was because he wouldn’t just openly tell Iino what was going on. For various reasons they are committed to these behind the scenes efforts that the other isn’t noticing in the slightest. They can feel good about themselves which is nice. But it could actually be feeding into their frustrations with the other. Not feeling appreciated for efforts the other party is never going to notice on their own. That’s the one thing that gives hope. Much like with Kaguya and Shirogane, if someone can just openly discuss what they are doing then the other person’s opinion might change. 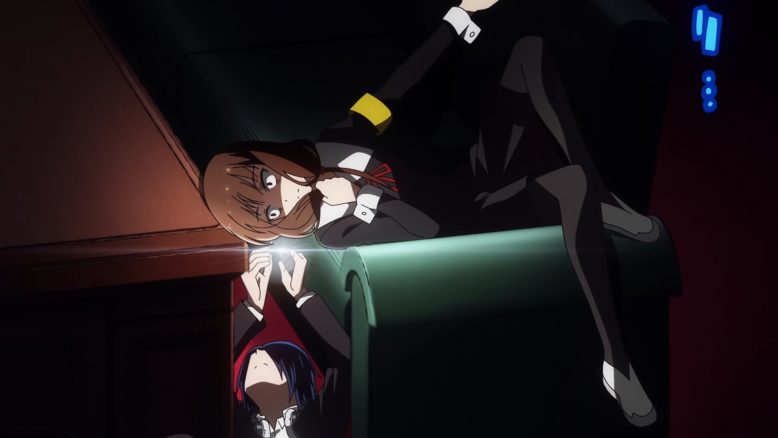 The lengths these two go to…

That whole situation was a fun mess though. The ridiculous extents they went to in order to clear their ‘missions’ was glorious. Again a lot of it came from Iino, but once Ishigami got swept up in the moment too things were looking bad. Full credit to Osaragi for saving the day. Well at least she saved poor Shirogane from having a mental breakdown at how absolutely out of hand things were getting XD. She does have a good grasp on how to handle Iino and she’s seen enough from Ishigami to at least manipulate things a bit there too. Of course, having them reduced to speaking like robots and talking about how much they like each other isn’t a total win XD. But it did stop them from fighting and maybe down the road they’ll have a chance of really getting along. 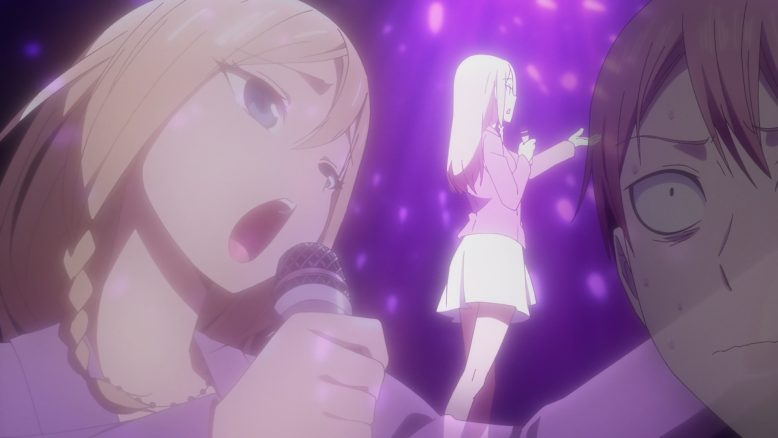 Most of the episode did go to the karaoke incident. I do honestly feel for Hayasaka in a lot of ways. Throughout the show she has been dragged into a lot thanks to Kaguya’s inability to confess. And I feel for her basically being dropped into a situation that she admitted wouldn’t be great to drop Kaguya herself into. She’s an attractive person and of course if she’s by herself guys there will be hitting on her. She basically used Hayasaka as interference to keep girls off of Shirogane without even considering how Hayasaka would feel about it. It took until quite a ways in for Kaguya to realize that Hayasaka was pissed. Enough so that she might have made some real moves on Shirogane if not for his rapping…skills to end things.

Hayasaka did of course orchestrate her own destruction. The characters in this franchise are pretty gifted at setting themselves up for failure. That’s no different in this case either. Hayasaka walked right into it and she paid the price. It says a lot for Hayasaka that she does believe acting is the only way she’ll be loved. Which is all the sadder since at this stage she has no clear love interest. She’s dancing around in this love comedy, playing the roles she has to, but doesn’t have many truly close to her besides Kaguya. Leaves me hoping she’ll lower her guard a bit and open up to others. 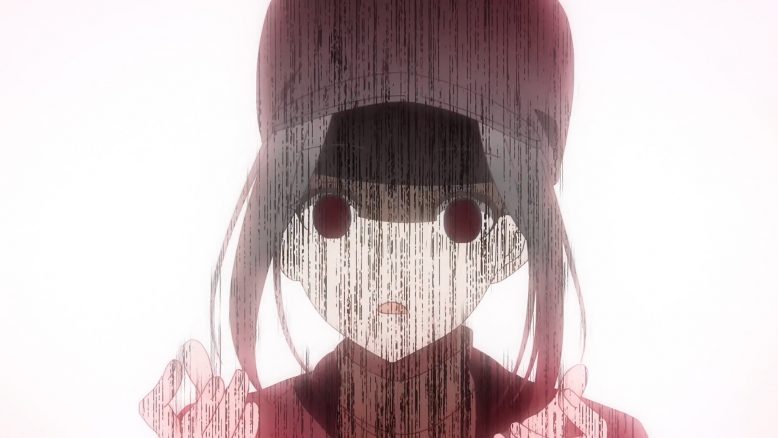 Kaguya kind of earned this one

But I can’t blame Hayasaka for pushing things a bit. Wanting to make Kaguya feel some heat and discomfort is understandable. The only reason Kaguya can be so hands off with all of this is because Shirogane loves her already. In a sense she’s relying on something like that without taking a step forward herself and just admitting how she feels. And that leaves everyone around her having to get caught up in schemes. This situation is just another occasion of it. Kaguya didn’t want to deal with the issues of bursting in on Hayasaka and Shirogane herself so she was left dancing around the halls outside their room in worry. Even going to the extent of calling up Chika and having to wait for her to arrive so she could burst in on…well anything that could have been happening.

It is nice at least that Kaguya can accept both she and Hayasaka having twisted personalities. And while she uses her in questionable ways, she does see Hayasaka as a sister. They do mess with each other, but at least they still care at the end of the day. Kaguya will still throw Hayasaka into situations like this because she doesn’t think about people’s feelings as much as she should. But at the very least it isn’t out of any malice. She just has some growing to do herself. And one can hope that she’ll think twice about putting Hayasaka into situations like that. Because Hayasaka will take action if she is. 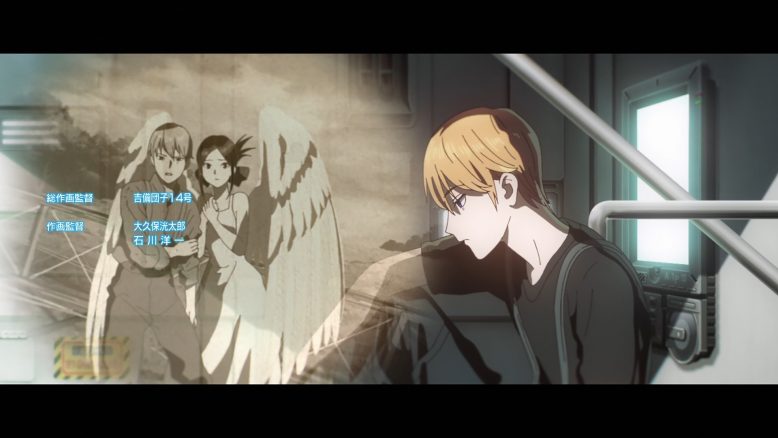 Time for a dream sequel

This was a fun episode. The OP was solid although we’ll see if it grows on me to the degree the first two did. I enjoyed how the ED was basically a sci-fi sequel to the first season’s ED. Going all Starship Troopers on us at points and incorporating more of the cast. And it works since this one was more a Shirogane sequence while the first was more for Kaguya. It shows a difference in preferences even though the two both dream of a relationship blooming between them. I don’t know how far season 3 will go or where the characters will end up by the end of it. But the first two episodes were a lot of fun and I expect that’s going to continue for the rest of the season. I’ll be enjoying it the rest of the way.